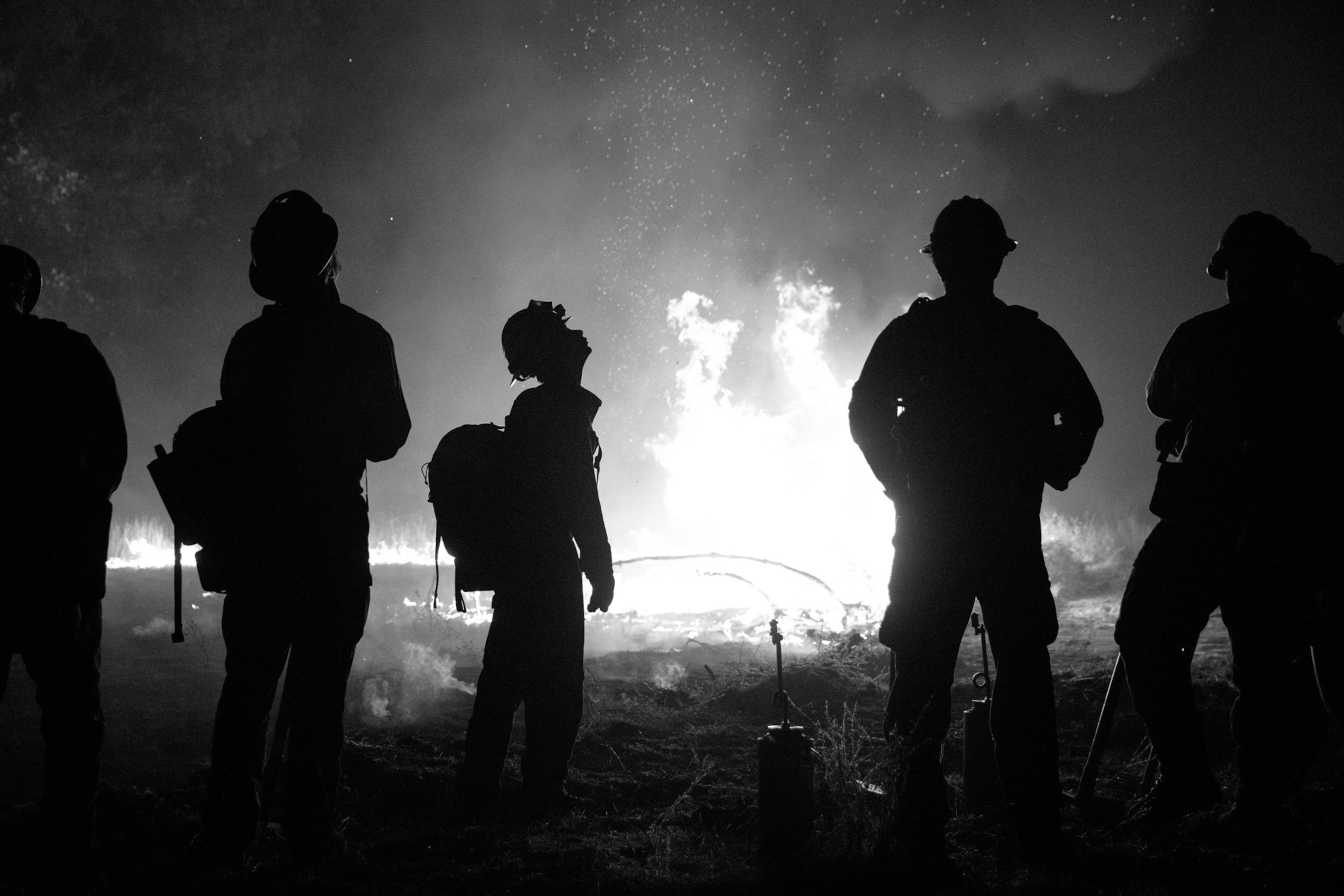 A national 'climate corps'? California is leading the way

The California Conservation Corps shows what a national Civilian Climate Corps might achieve: a big win for the environment and meaningful work for youth—outdoors.

California Conservation Corps firefighters watch a fireline at the Bear fire near Oroville in September, 2020. Founded in 1976, the youth corps now has more than 1,500 members. Fighting fires is an increasing part of their work.
Photograph by Max Whittaker, The New York Times

Markleeville, CaliforniaA cold, constant rain is falling on the burned-out vehicles, buildings, and Jeffrey pine forest at Grover Hot Springs State Park. Almost 6,000 feet up in the Sierra Nevada mountain range, the park was torched last summer by the Tamarack fire, which burned over 68,000 acres east of Lake Tahoe.

Even in the downpour, eight-foot-high piles of just-ignited woody debris burn fiercely, their crackling accompanied by the constant whine of chainsaws. The 14 members of the California Conservation Corps’ Tahoe Fire Crew No. 1 are felling hundreds of blackened “hazard trees” marked with orange spray-painted numbers. At risk of toppling, they need to be cut down before workers can clean up the zone.

A warning is called—“Second cut. Tree falling!”—and another 80-foot-tall dead pine drops across the road.

Working in the mud among piles of logs and stumps, the blue-helmeted corps members are soaking wet and grime-streaked. The chainsaw operators wear dark Kevlar chaps and yellow jackets stained with dirt and wet sawdust.

“We’re sure living up to the promise,” 21-year-old crewmember Elizabeth Wing says with the bare hint of a smile. The “promise” is the official motto of the California Conservation Corps: “Hard work, low pay, miserable conditions, and more.”

“I’ve had a lot of crappy jobs, but not this one,” explains Martin Castellon, who was raised in Tijuana and San Diego, and spent his 26th birthday shoveling snow for the corps. “Sure, we have some crappy conditions. But it makes you appreciate it all the more.”

As part of the Build Back Better plan that is currently stalled in Congress, President Joe Biden has called for the creation of a national Civilian Climate Corps to improve the environmental resilience of the United States, while providing good jobs for hundreds of thousands of young Americans. Even at the national level, the basic idea isn’t new. In 1933, during the Great Depression, President Franklin Roosevelt created the Civilian Conservation Corps that, in its nine years of operation, employed three million young men—it excluded women and most Blacks—and built the trails and infrastructure of the country’s national parks. The corps would later provide a pool of trained and disciplined troops to serve in World War II.

Adapting Roosevelt’s model but making it more inclusive, former California Governor Jerry Brown established the California Conservation Corps (CCC) in 1976, during the early days of the environmental movement and his own first stint as governor. Today “the Cs” (as members call the corps) recruits young men and women between 18 and 25 years old. It has more than 1,500 members working out of 24 centers across the state.

CCC members come from a wide range of backgrounds. They used to work in retail, construction, machine shops, restaurants, tire stores. Some have completed some college. Most wanted something more.

“I was just drifting job to job and wanted to be part of something larger than myself,” says 26-year-old Luis Valez. “I saw an ad on Facebook and just jumped and haven’t looked back since.” This past summer his fire crew was at the Dixie fire for two months and the Caldor fire for a month, working long shifts—sometimes 24 hours—protecting houses. “It has been wild,” he says.

If new corps members don’t have a high school degree (about 15 to 20 percent don’t), they’re required to get one through one of the charter school partners that hold classes at the CCC’s residential and non-residential centers. That adds 10 hours of classroom work to their 40-hour work week. Those who complete at least a year in the program also qualify for up to $8,000 in scholarships for college or professional training. Even their “lousy pay” was improved in October—boosted from $1,905 a month to $2,265.

Climate change, which has led to more frequent, more intense fires around the world, has significantly affected the California corps. Five years ago, members mostly had jobs in forestry, energy, transportation, fisheries, and the culinary arts; only one crew was dedicated to firefighting. Now, 400 CCC members, more than a quarter of the corps, form 12 crews that work with the California Department of Forestry and Fire Protection (Cal Fire).

At the height of the state’s fire season in September, the CCC had 40 crews at CalFire base camps, rolling hoses, restocking supplies, helping with water and meals, collecting trash and more. Twenty-six fire crews were also on the front lines clearing fire breaks with chainsaws and hand tools.

Corps members are also trained in flood control, ready to fill and strategically place tens of thousands of sandbags during the next major deluge.

Climate change “wasn’t our focus 35 or 40 years ago, but the environment has always been,” notes CCC director Bruce Saito. He hopes the California corps—along with 130 similar state and local organizations—will be integrated into Biden’s Civilian Climate Corps, if it comes into being. With 45 years of field experience, the California corps could offer valuable lessons to a national one.

While CCC members join for a wide variety of reasons, once involved in the work many develop an environmental ethic.

“If you’d asked me two years ago what a conservationist is, I’d have had no idea,” says Naomi Muratalla, who works out of a center in Stockton that covers the Sacramento Delta. “At 19, I was working as a caregiver for elderly folks with disabilities, and it was kind of overwhelming. I joined the [CCC] program and moved into a residential center. You work with the people you live with, and now my crew’s like my family.

"Honestly, it’s changed my life. I thought I wanted a medical career but now I want to build trails and plant trees, and in 20 years I can come back and say, I planted this grove.”

Wearing heavy leather gloves, Muratalla uses a pick and shovel to fit river rocks into a pathway at the Micke Grove Zoo, in a county park in the agricultural town of Lodi. Her crew is reconfiguring a turtle pond to include a butterfly garden. Another crewmember in waders stands in the pond varnishing a wooden visitor overview they have rebuilt. The turtles wait in big blue tubs in a nearby enclosure.

“The thing is with the Cs, it’s not a bunch of troubled youth like a lot of people think,” says John Alviso, 24, a fire crew member and former U.S. Army reservist. “It’s people who want to learn and get a career and are willing to work hard to do that.”

The physical effort is a big draw for some corps members. “I was going to art school online and living in my parent’s attic in the Bay Area and I just wanted something more active,” Wing explains. She ended up in the CCC’s Backcountry Trails Program, where crews spend an average of six months fixing hiking trails in the most remote parts of the state.

Aside from fires, the Cs have responded to other kinds of disasters over the years, including earthquakes, the Los Angeles riots, and floods. Since the onset of the COVID pandemic, the state has sent corps members to staff food banks and vaccination centers. CCC members also have responded to out-of-state disasters in Iowa, Nebraska, Texas, Louisiana, and Puerto Rico.

While discussion of a national Civilian Climate Corps tends to focus on developing well-paying green jobs in clean energy, urban resiliency, wetlands, and forest restoration, the California corps’ experience indicates that disaster response in a warming world will play an increasing role in any such program—and that it needs to be planned for.

Becoming a wildland firefighter for Cal Fire or the U.S. Forest Service has become a major career goal for some corps members. Other common job opportunities within government include working for the California Department of Transportation, state parks, U.S. Fish and Wildlife, or the California correctional system. Private forestry, clean energy, and other companies are also interested in hiring corps members.

“Employers who see an applicant has had CCC service, they know they’ll show up to work, and there’s that consistency,” says Saito. “Also that they’re team players.”

Amid the burned wreckage of Grover Hot Springs, the team play of the moment is tug-of-war. Crew supervisor Renae Perez-Gallardo calls for help when a cut tree gets caught in the branches of a larger tree. “Corps members assemble,” someone else shouts, and ash and grease-stained volunteers run over.

Several lines and a rope are strategically thrown over Tree #104. Fifteen young people start pulling on it, until finally the 60-footer topples to the forest floor. The crash is accompanied by a loud, collective cheer.

Earlier, Perez-Gallardo was training Alviso on the chainsaw. She instructed him how to direct the angle of a tree’s fall using strategic cuts and an aiming point on the saw. Asked if he was looking to become a firefighter after the CCC, he’d looked back admiringly at his teacher, a foot shorter and a decade older than he.

“I want to do what Renae does,” Alviso said. “I want a career in helping people learn.”