Seven Januaries ago, I began walking across the planet. I wondered back then how human conflict would shape my route. As it turned out, I didn’t need to go anywhere to reach my first war. One engulfed my journey’s starting line in the arid Rift Valley of Ethiopia.

My local walking partner, Ahmed Elema Hessan, a balabat, or traditional leader, of the Afar pastoralist group, could see the front lines. I couldn’t.

“Go left!” Elema would say, as we scuffed across what appeared to be featureless desert. “No—more left!”

We were trudging north, making for the Gulf of Aden more than 200 miles away, all the while skirting invisible (to me) frontiers raided by “enemy” herders: the dreaded Issa. The Afar and the Issa were engaged in an ancient resource war over shrinking waterholes and grasslands. They shot each other dead. At one unhappy camp, I lay beside a cook fire snuffed out early to avoid detection, my boots laced up inside my sleeping bag, ready to run as I waited for gunfire to puncture the yowls of hyenas. How old are such nights? 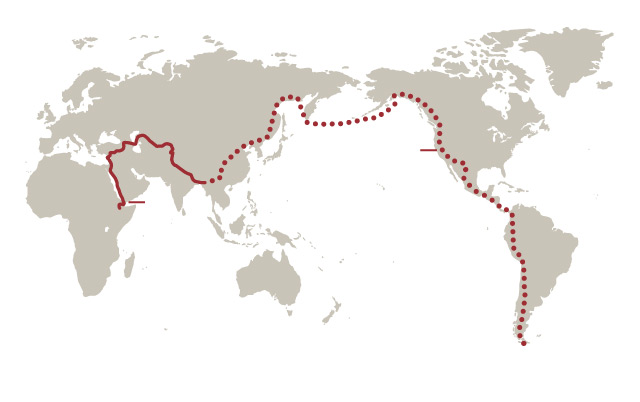 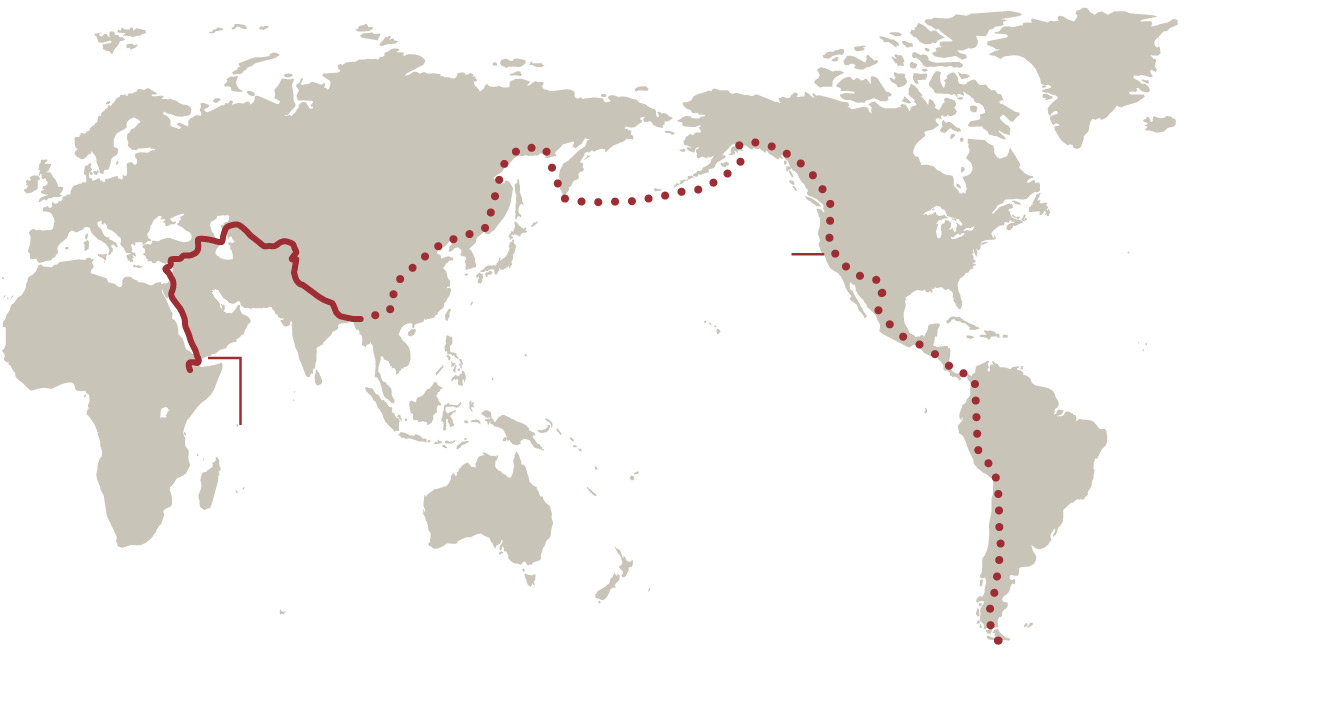 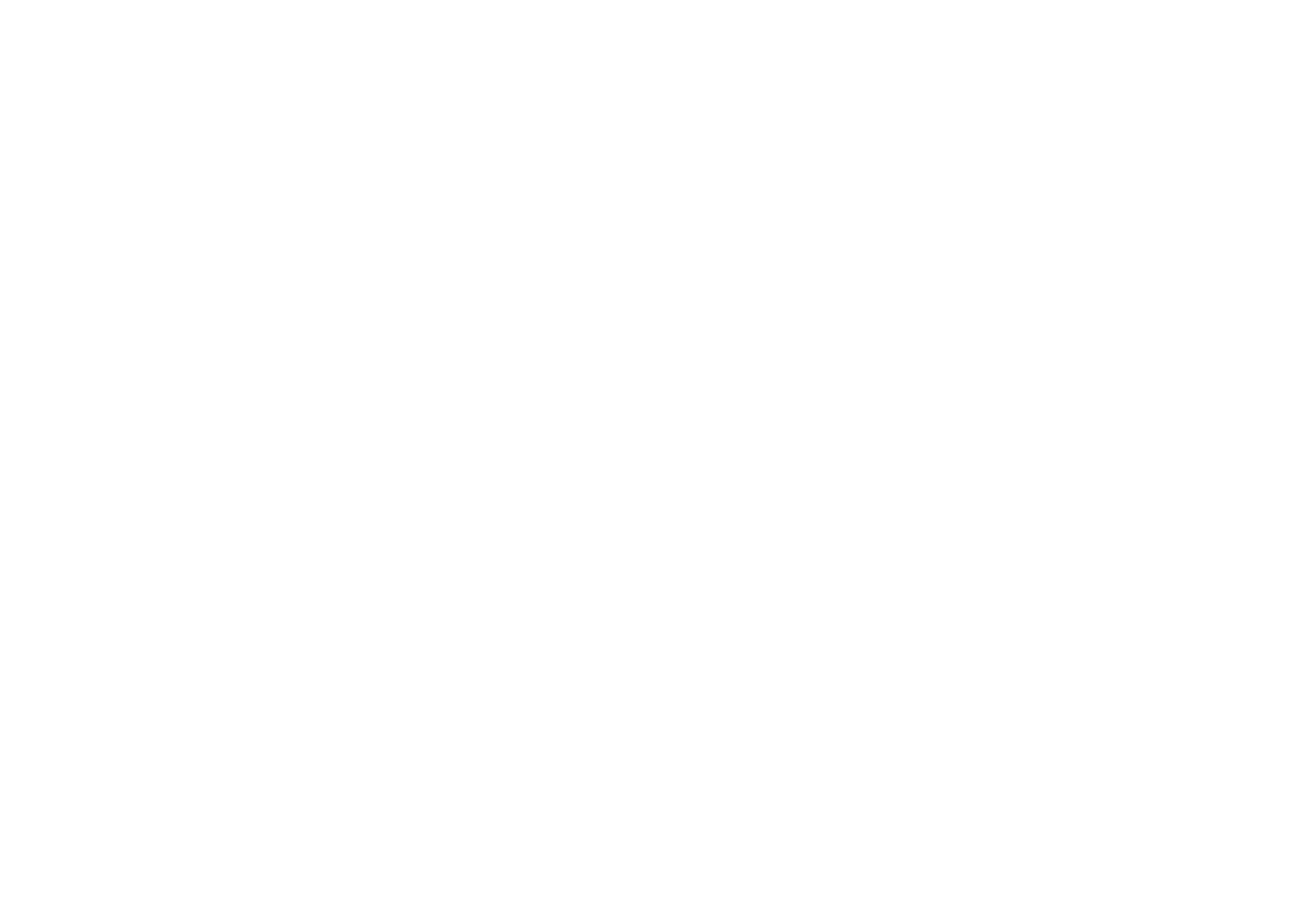 January 11 marks the seventh anniversary of my walk’s first steps out of Africa. Since then, I’ve logged about 10,000 miles on a storytelling project called the Out of Eden Walk, which aims to retrace humankind’s journey from the mother continent to our Stone Age Land’s End at the tip of South America. I just completed an 18-month-long traverse of northern India, en route to China. Lately, I’ve been hearing rumors of new wars in the Middle East. And this has got me thinking—as one tends to on foot—about our species’ unshakeable propensity for violence.

“Aren’t you worried someone’s going to cut off your head?”

“Haven’t you been robbed?”

“What about land mines?’

I sometimes hear these questions from students when I video conference from my trail into classrooms across the globe. Fear of the wider world often emanates most strongly from North Americans or other residents of the Global North. And that is normal. This is where, today at least, much of the planet’s material assets are concentrated. Living well in an unequal world means being haunted, at some level, by anticipatory loss. Fear comes in the envelope with the energy bill.

That said, it’s true: I have encountered human aggression, on scales both intensely personal and malevolently large, along my path.

In Ethiopia, the beleaguered Afar and Issa were murdering each other in an antique duel almost nobody else on Earth cared about. But I also got shot at by the Israeli army in a quintessential dispute between Palestinian villagers and Israeli settlers in the infamous hot spot of the West Bank. Kurdish militia ambushed my little walking party in eastern Turkey, mistaking us for ISIS infiltrators from nearby Syria. (I had to walk around Syria.) And a Taliban offensive nearly aborted my passage over the snowy Hindu Kush in Afghanistan.

This might seem like a doleful itinerary from our violent age: not so much waypoints on a walk meant to connect humanity as a plunge into the Phlegethon, the river of burning blood in which murderers, warmongers, and tyrants boil in Dante’s Inferno.

But its not true.

As Steven Pinker has argued in his controversial book The Better Angels of our Nature: Why Violence has Declined, we may be enjoying, at least statistically, the safest times our species has known since we evolved 300,000 years ago. Violent deaths, ranging from individual homicide to massed chemical weapons attacks, have been in decline for generations, Pinker writes, thanks to everything from the invention of agriculture to the humanist philosophy that inspires minority rights movements. Such optimism is challenged by skeptics, who note that colossal state-to-state bloodlettings like World War II have been replaced by smaller, longer, more complex, and bloody enough proxy wars. And anyone who thinks appeals to violence are a passé vice of the ancestors need only watch the bloodlust on display at modern political rallies.

Still, anecdotally speaking, from my boot-level experience of plunging across continents on foot for 2,555 days and nights, I can report this undramatic reality: On a multiyear trek that eventually will span more than 30 nations and total about 24,000 miles, landscapes of violence have been vanishingly rare. Probably more than 95 percent of my GPS track, including months spent zigzagging through war-bruised landscapes in the Middle East, has been uneventful. The villages in the Caucasus rumbled with tractors. Back roads curled, on slumbering afternoons, for thousands of miles through Central Asia. In northern Pakistan the greatest peril, at least for me, was unearned speed: homicidal motorized traffic.

I tell the students: The overwhelming number of people met at trailside, and they now number in the tens of thousands, from startled camel shepherds to lazy secret policemen, are usually as humane as they are.

I cherish few illusions about the bedrock depths of human cruelty.

“A woman, pregnant with a 6- to 9-month-old fetus, was killed by a blow to the head, the fetal skeleton preserved in her abdomen. The position of her hands and feet suggest that she may have been tied up before she was killed.”

This traumatic detail isn’t from a human rights report about war in modern Afghanistan, Ukraine, or Yemen. It describes a 10,000-year-old archaeological site in Kenya that revealed evidence of extraordinary brutality among ancient hunter gatherers—the world-walking pioneers I’m following. Scientists found 27 unburied bodies of women, men, and children sprawled at the scene of that prehistoric massacre.

The task is to avoid becoming inured.

I have found walking good for this.

Walking teaches patience. It works as an antidote against fear. It erodes cynicism about the violence of fellow Homo sapiens. In its capacity to sustain hope, it makes you a baby again.

The most remarkable war I have encountered so far on my trek resided inside a bushy-bearded man named Mohammed Sirajuddin Ahmed, a 69-year-old farmer from Assam, in northeastern India.

Sirajuddin lived in a small town named Nellie, which was the scene of a notorious communal massacre of Muslims by Hindus in 1983. Some 2,000 farmers and their families were hunted down and slaughtered in the surrounding fields. (A witness recalls victims trying to ward off arrows and bullets by using wok-like cooking pans, called kadhais, as shields.) Sirajuddin escaped death, but four of his five children did not. His wife, Rejia Begum, was speared in the back but survived, though she miscarried her baby.

“Why do you people keep coming here to talk about it?” Sirajuddin gently chided me, identifying one of dispiriting truths of bearing witness. “We don’t remember it much anymore except when the media shows up. Then you write about it, and what happens? Nothing.”

Even so, he walked out once again into the rice paddies to show me where his dead once had lain in piles. The worst of war, neighbor against neighbor. Sirajuddin seemed philosophical, softened and not hardened by grief. He was utterly devoid of bitterness.

In Nellie, everyone knew who the mass murderers were. The suspects had never been tried or imprisoned. One of the accused, a friendly man I had interviewed, brought me cold lemonade as I walked the road out of town. I briefly considered not drinking it. I did, though, for Sirajuddin.