This expert has tracked 30 years of global protests. Here’s what he’s learned.

A research project in New York has tracked growing attempts to remove politicians from power—from Lebanon to Thailand.

As rioters began storming the U.S. Capitol last Wednesday, David Clark, a professor of political science at Binghamton University in western New York, was in a nowadays rare in-person meeting with a few other faculty members. The group at the table included an anthropologist, an art historian, and a psychologist. As their phones began to buzz with the stunning news, the group looked to Clark for his analysis.

For the past seven years, Clark has run the Mass Mobilization Data Project, an effort to track global protests since 1990. What he doesn’t track are protests on American soil. He had expected this year’s contentious election to stir up violence in Washington, D.C. But he had never imagined that the Capitol would be breached while Congress attempted to certify the Electoral College votes.

“This is so far beyond my wildest beliefs or nightmares,” he says. “It was hard to think about what this could mean, because everything I could relate it to was in a country where I’d thought, ‘Well that was there, that can’t happen here.’ Now we see those things can happen here.”

Over the following days, Clark’s mind began connecting disparate moments in history with what had unfolded in D.C. There are countless examples of protestors trying to remove politicians from power—what, in effect, the rioters at the Capitol were aiming to do to President-elect Joe Biden. “What happened Wednesday stands out because it is so singular in U.S. history,” he says. “Yet it’s not that unusual if we look at events across the world.” (Read more about whether the attack on the Capitol was unprecedented.)

The number of protests with more than 10,000 participants whose goal is to remove a politician has grown over the past few decades.

In 2019, thousands of protestors in Puerto Rico successfully forced their governor to resign. On January 6, 2021, thousands of pro-Trump supporters stormed the U.S. Capitol building. The Mass Mobilization Data Project does not track U.S. protests. 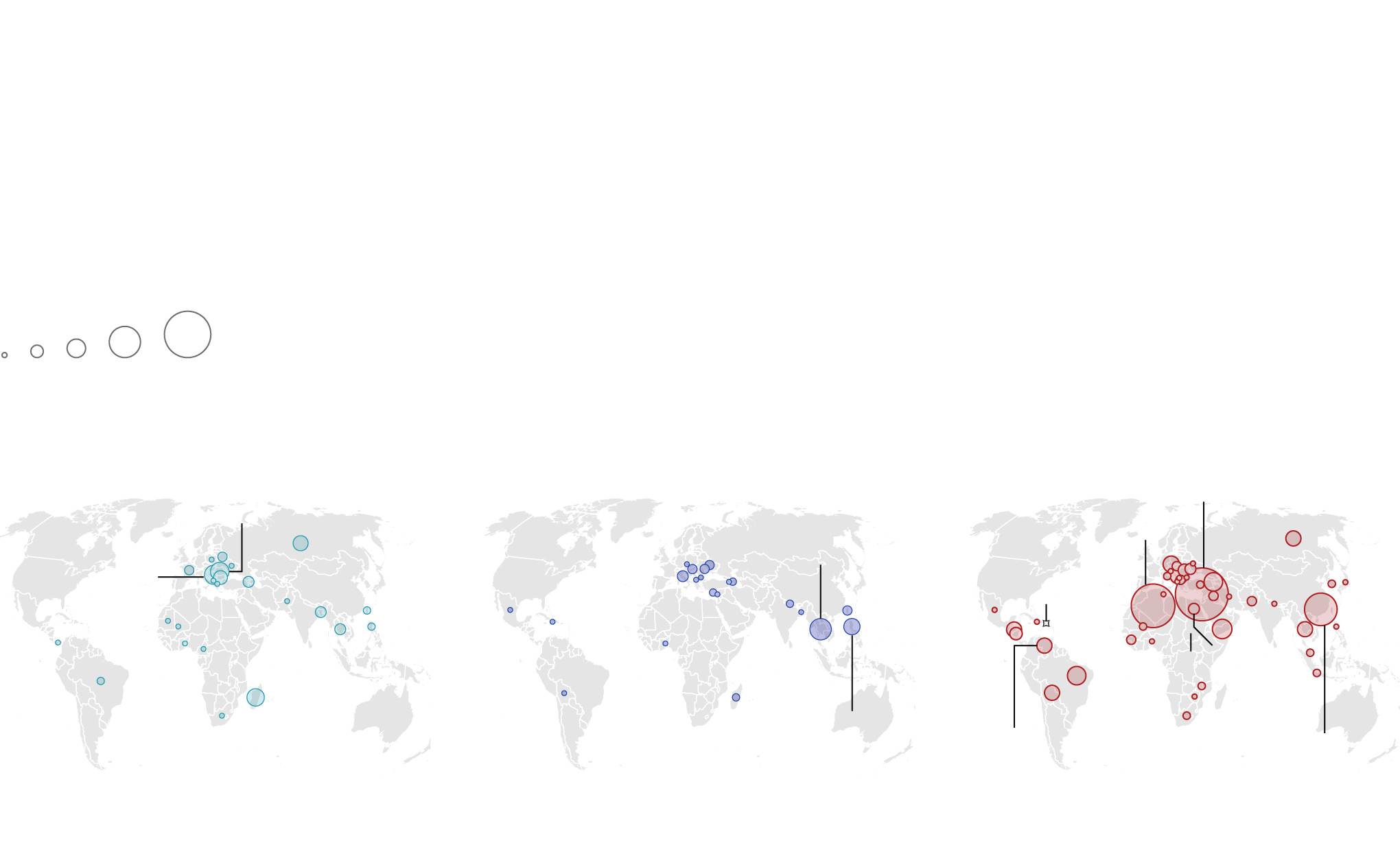 Mass mobilizations around the world

The number of protests with more than 10,000 participants whose goal is to remove a politician has grown over the past few decades.

In 2019, thousands of protestors in Puerto Rico successfully forced their governor to resign. On January 6, 2021, thousands of pro-Trump supporters stormed the U.S. Capitol building. The Mass Mobilization Data Project does not track U.S. protests.

Number of protests with over 10,000 participants

He thought of several prominent examples: A coup against Haiti’s Jean-Bertrand Aristide in 2004. Hosni Mubarak’s fall from power in Egypt in 2011. The building occupations in Kyiv during the Ukrainian Revolution in 2014. Venezuelans’ numerous failed attempts to dislodge Nicolás Maduro. Although breaching government buildings is uncommon in what Clark calls “developed democracies,” states in Latin America recovering from civil war have a long history of ex-militants taking over buildings to demand healthcare or government assistance.

When Clark started the Mass Mobilization Data Project in 2013, it was with the goal of understanding how citizens demonstrate against governments, and how governments respond. At the time, there was no existing clearinghouse for such data. Now, he says, there are groups tracking protests as small as two people, but his focus is on protests involving groups of 50 or more. His data so far encompasses 162 countries and around 16,500 protests.

The project, which is funded by the U.S. government’s Political Instability Task Force, doesn’t distinguish between protests, riots, and coups. Clark chronicles them all, including some that, at first blush, are unexpected: naked bike rides through Lima, Peru; a union of clowns marching in Mexico; migrants in Greece sewing their mouths shut. (Read more about why comparing the Capitol insurrection to ‘third-world countries’ ignores U.S history.)

It’s nearly impossible to determine the success of a protest—agreeing to concessions and whether they’re followed through can take years—and Clark doesn’t attempt it. (There are outliers: Protests in Sudan over the price of food in 2018 grew strong enough to overthrow the three-decade regime of President Omar al-Bashir.) What he can do is note the organization’s tactics and violence. The more control organizers have over the protests, he says, the less violent they are likely to become. Meanwhile, “where protests are spontaneous, they’re more volatile, both on the protestors’ and the government’s side.”

That said, there’s no historical consensus for what will spark a protest, how large it will grow, or how it will end.

“Protest is such a widely varied thing, in terms of how and why,” says Clark. “And it’s costly: You have to go outside, jostle with people, deal with authorities.” But, he adds, “I find it encouraging that human beings are willing to do this for various causes. Sometimes they’re causes I just wish they weren’t pursuing—like this past Wednesday.”