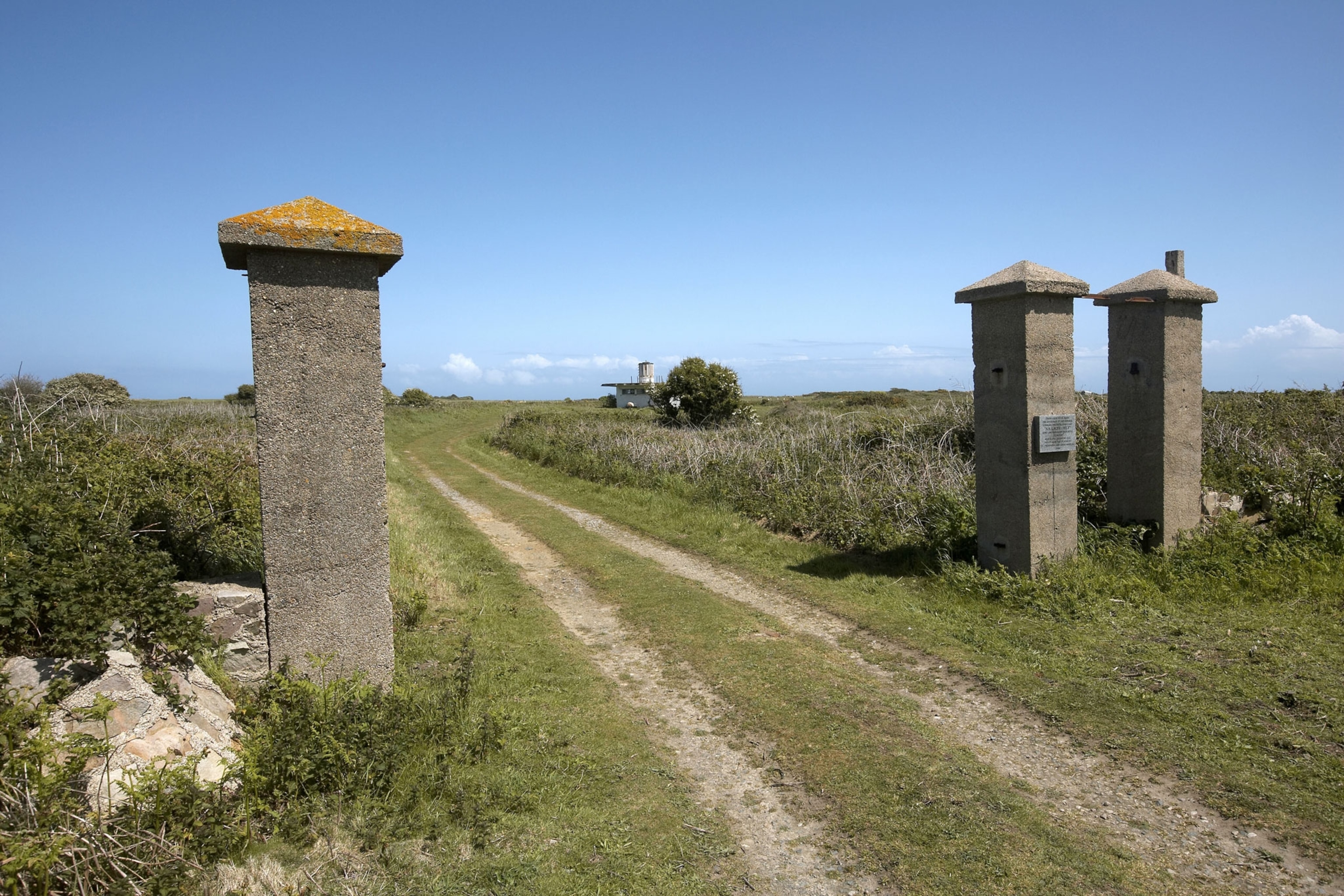 A decade-long forensic investigation is illuminating a chapter of World War II in the Channel Islands that many would prefer to forget.

The entrance gates to the Nazi concentration camp Sylt are among the few visible remains left of the camp on the Alderney in the Channel Islands, part of the British Crown Dependency known as the Bailiwick of Guernsey.

Today, the site of the former concentration camp Sylt is an overgrown patch of land hard against the rugged cliffs of Alderney, part of a British Crown Dependency in the Channel Islands. But just 75 years ago, it was a feared and heavily guarded German prison where hundreds of men suffered and died at the hands of their Nazi captors on its soil.

With the end of the war, Lager (camp) Sylt and other smaller German camps on Alderney were dismantled and slowly faded into the landscape. Now, a British team of archaeologists has reconstructed Lager Sylt and tracked how it grew over its short but brutal history. Their research is published today in the journal Antiquity.

Caroline Sturdy Colls, an archaeologist with expertise in Holocaust sites and lead author on the study, says the evidence for the crimes committed at Lager Sylt has been “physically and metaphorically buried.”

“As a British citizen and a researcher, I hadn’t heard about the atrocities perpetrated on Alderney during World War II until I was doing my Ph.D. research,” says Sturdy Colls, who is now a professor of conflict archaeology and genocide investigation at Staffordshire University in England. “I had a wider awareness of the fact that the Germans occupied the Channel Islands, but not really that they built those camps.”

Sturdy Colls and her colleagues wanted to explore how forensic archaeological methods could bring to light this history. They began studying Lager Sylt in 2010, combining evidence from archival records, historic aerial photographs, and new non-invasive survey techniques like LiDAR and ground-penetrating radar.

One important aspect of the research was simply proving that much of the camp indeed survives today. The wartime history of the site remains a taboo subject on the island. Sturdy Colls says some residents of Alderney had been supportive. But the team has faced resistance to their work from local authorities, especially after a 2019 documentary titled “Adolf Island” featured her study of the camp and claims that there might be as-yet unaccounted for mass graves at the World War II-era cemetery.

After France fell to the Nazis in June 1940, the British government decided that it would be too difficult to defend their self-governing territories in the Channel Islands, the archipelago between France and England. While many civilians remained on Jersey and Guernsey, the largest of the Channel islands, nearly all of Alderney’s residents were evacuated. The Germans encountered no resistance when they arrived on the three-square-mile island that July.

Under occupation, the Channel Islands became part of the Nazis’ “Atlantic Wall” coastal defense system stretching along the western edge of Europe. To build Alderney’s fortifications, the Nazi engineering group Organisation Todt established several forced- and slave-labor camps on the island. Most prisoners in the camps were from Ukraine, Poland, Russia and other Soviet territories, but there was also a significant contingent of French Jews. In March 1943, Lager Sylt—already Alderney’s most feared labor camp—became a concentration camp run by the “Death’s Head Unit” of the SS paramilitary.

After the war, as civilians returned to Alderney and began rebuilding their lives, the British military investigated the abandoned and partially demolished camps. The investigators mapped what remained of Lager Sylt and compiled accounts from witnesses of dog attacks, beatings, and shootings. They found that when a prisoner died, the camp doctor was often barred from seeing the body and ordered to sign pre-printed death certificates, usually with the cause of death listed as “faulty circulation” or “heart failure.” At a cemetery on the island, the investigators found a coffin with a false bottom.

Further prisoner testimonies in the decades that followed helped illustrate the inhuman treatment prisoners experienced. Francisco Font, a Spanish Republican and forced laborer at one of the other camps on Alderney, recalled that while doing work near Sylt, he saw a “man strung up” on the main gate. “On his chest he had a sign on which was written: ‘for stealing bread,’” Font says in a recording kept at an archive in Jersey. “His body was left hanging like this for four days.”

The Nazis rountinely fed their prisoners the bare minimum, but because rough seas sometimes prevented regular deliveries to the Channel Islands, even that alotted food could be in short supply, says historian Paul Sanders. Due to the combination of scarcity and corruption among the SS officers, “even less food found its way to the prisoners than it did in other parts of occupied Europe” says Sanders, who is author of The British Channel Islands Under German Occupation 1940-45. Adding to this “particularly lethal constellation” of conditions in Alderney was the lack of civilian witnesses.

“It makes a difference for the perpetrators if they’re being watched by the civilian population,” Sanders says. “The fact that there was no set of civilian eyes watching what was going on in Alderney led to a much more profoundly brutal environment.”

In the new study, Sturdy Colls and her team found physical evidence supporting witness accounts of harsh conditions at Sylt. They mapped the surviving shallow depressions of the barracks at the camp, confirming witness reports of overcrowding; each prisoner would have had just 16 square feet of space at best. Through the course of removing vegetation from the site, they uncovered the prisoners' toilets. The team made virtual-reality visualizations for a clearer view of features—such as an underground tunnel leading from the commandant’s house to the camp—that were difficult to see in the field due to bad lighting conditions.

Using historic aerial images, the researchers also tracked how both the size and security measures of Lager Sylt drastically increased when it evolved from a labor camp to a concentration camp in 1943.

The SS, for instance, went to great lengths to outfit Lager Sylt with imposing fences and guard towers, which surely had a profound psychological effect on the inmates.

“In a way, it didn't need any of those things because it was on a corner of a small island surrounded by minefields,” Sturdy Colls says. “There was nowhere for any of these prisoners to go.”

How the legacy of Lager Sylt and Alderney under Nazi occupation should be presented is still a matter of debate. One of the few clearly visible elements that remain of the camp is the main gate. Today it is marked with just a small plaque, placed there in a ceremony in 2008 at the request of former prisoners.

Proposals to excavate at Lager Sylt have thus far been denied, Sturdy Colls says, which has made her team's no-dig, forensic study of the Sylt site all the more important.

The work we did was trying to help the stories of the people who suffered be known more widely.”

"In my opinion, the paper will be useful in helping the island of Alderney to see the extent of traces of Lager Sylt left in the landscape and therefore to think again about how the camp might be used in the island's heritage strategy in the future," says Gillian Carr, an archaeologist at the University of Cambridge. Carr has studied the occupation of the Channel Islands but was not involved in this recent study.

In late 2017, the Alderney government did formally designate Lager Sylt a conservation area, barring development that would threaten the site. Graham McKinley, an elected Member (legislator) of the States of Alderney, says he would like to see the Lager Sylt site made more accessible to visitors. He's trying to re-establish a heritage committee that would explore how the location could be studied, preserved and made into a memorial site.

"There is still a small group of people who want to put the past behind them and continue without looking into it too much," says McKinley. "I believe we should be doing a lot more to show the world what actually happened here."