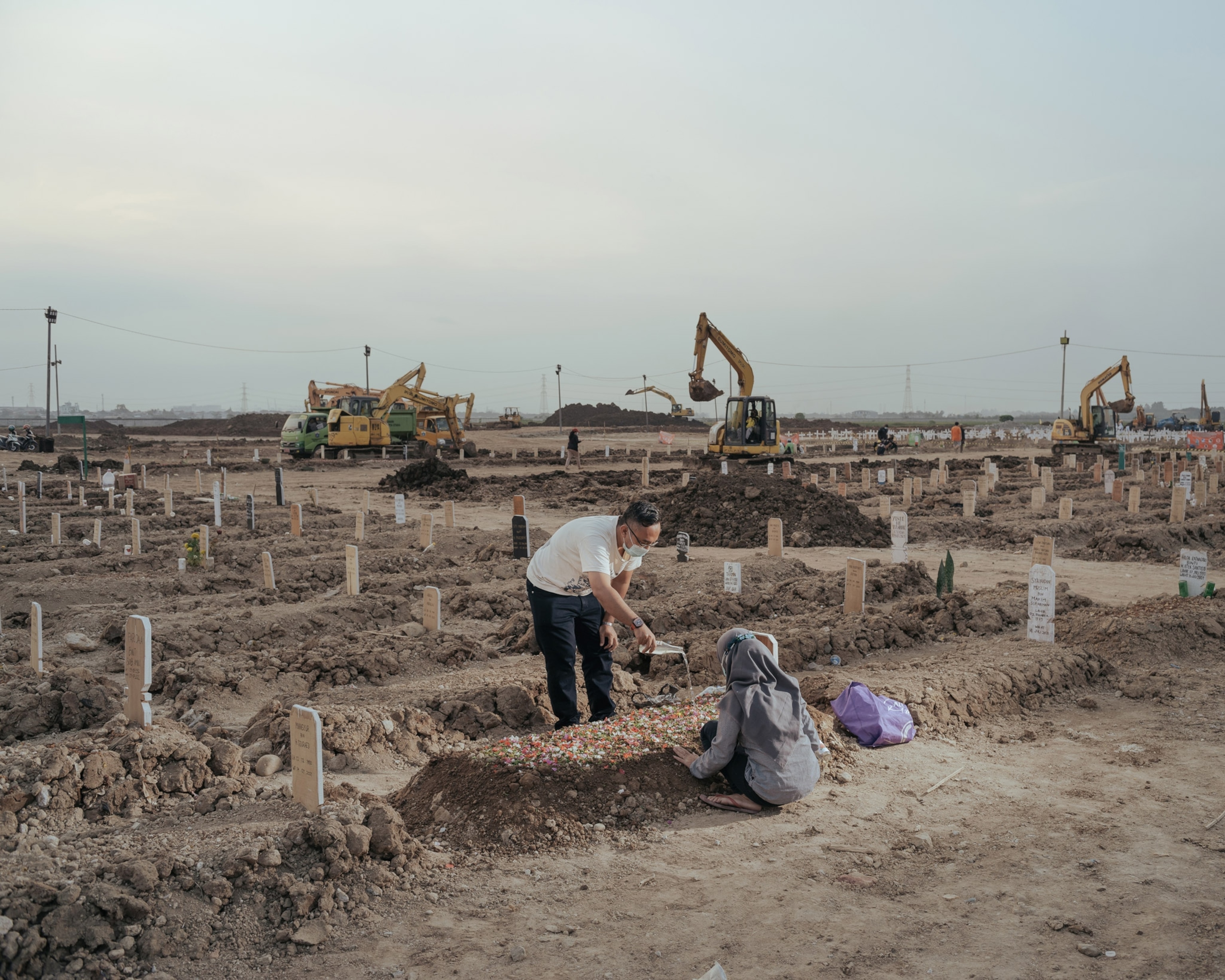 Indonesia is a new COVID-19 epicenter. The peak has yet to come.

"After the pandemic we probably will have a lost generation."

Indonesia is now a major epicenter of the COVID-19 pandemic with more than 49,000 confirmed cases a day. Here, relatives pour rose water and offer flowers at a COVID-19 victim’s grave at Rorotan Public Cemetery in Cilincing, North Jakarta on July 21, 2021. According to the federal count, more than 84,000 people have died due to the virus.

In Jakarta’s Pulo Gebang Main Bus Station just a few days ago, thousands of people waited in snarled lines to claim one of the 10,000 COVID-19 shots being offered in the country’s latest emergency vaccination push.

Meanwhile, across the city, others were making a more somber pilgrimage to the city’s new mass cemetery for COVID-19 victims. There, families laid flowers and whispered final goodbyes while backhoes dug new graves just steps away. Originally designed to hold 7,200 bodies when it opened in March of this year, the city is planning to add nearly 25 acres to accommodate more remains as the country confronts a record high of COVID-19 deaths.

As the second wave crashes through the fourth most populated country in the world, the government of Indonesia and its citizens are struggling to respond. Competing priorities and delayed vaccination campaigns and lockdowns, among other issues, have created a dire situation. Conditions will likely get worse for many before they can improve, experts say.

With more than 49,000 confirmed cases a day, Indonesia is now a major epicenter of the COVID-19 pandemic, along with Brazil and the United Kingdom, which are reporting 54,517 and 39,315 cases a day respectively.

Indonesia also is the latest country in Southeast Asia to face a major outbreak due to the Delta variant, and many believe that the reported cases are a severe undercount of the situation. More than 27 percent of people taking COVID-19 tests are infected, indicating that many more cases are circulating throughout the population undetected. A recent survey of antibodies in Jakarta, the country’s capital, suggests that nearly half of the city’s 10.5 million people may have already been infected.

Meanwhile, the healthcare system across the country is straining under the pressure. Last week hospitals were running out of rooms and oxygen in Java, while this week Bali is experiencing a similar crash. Jakarta’s hospitals are currently at 73 percent capacity, according to the vice governor. In the first half of July alone, 114 doctors died from the virus. More than 1,500 healthcare workers have died since the beginning of the pandemic.

For now, the COVID-19 death rate is around 2.6 percent—compared to 1.8 percent in the United States or 2.8 percent in Brazil—but this number is set to rise as the virus spreads to Indonesia’s more rural islands with weaker healthcare infrastructure.

Barreling toward the peak

In an emergency effort earlier this month, the government enacted social distancing measures that restricted travel, indoor dining, and closed certain in-office workplaces. This week the government adjusted the restrictions to allow traditional markets and some restaurants, mosques, and malls to reopen. Mass vaccination campaigns also are underway.

Of the approximately 270 million people in Indonesia, only about 6 percent have been fully vaccinated. The latest push resulted in the distribution of nearly 874,000 doses. The government is aiming to administer two million doses per day starting in August. But without their own vaccine, the country must rely on international supplies.

“We need lightning-fast action globally so that countries like Indonesia have access to the vaccines needed to avert tens of thousands of deaths,” Sudirman Said, secretary general of Indonesian Red Cross, said in a statement late last month.

Coupled with the initial slow vaccination rollout, testing remains out of reach for many of the most vulnerable. The government provides free testing for those who present symptoms or have come into contact with someone who tested positive. Otherwise, the PCR test, which can detect the virus before a person becomes infectious, can cost more than $60 USD while the average worker makes a little less than $200 per month. A positive result can also add an economic hardship for those with limited income.

“Many people are queuing to the lab for testing, but once they learn the price of the test many decide not to take it,” says Eusebius Pantja, an economist at the MINDSET Institute in Indonesia.

“They want to get tests but if they get a positive test they have to stop working. How can they maintain their lives? It limits the incentive to get tested,” adds Aloysius Gunadi Brata, an economist at Atma Jaya Yogyakarta University in Indonesia.

The federal government claims that 84,766 people have died from COVID-19 in Indonesia since the beginning of the pandemic. But Irma Hidayana, a co-founder of Lapor Covid, a collective that gathers and shares information on the pandemic in Indonesia, believes it’s a severe undercount. She along with more than 150 volunteers regularly compile municipal COVID-19 data from 180 cities and 34 provinces. They argue that the federal government has “disappeared” more than 20,000 deaths in the national count, which is far below what lower level governments are reporting.

“Cases right now are soaring because they don’t receive the real information,” says Hidayana. “People don’t understand what is going on in terms of the spread of the virus and how dangerous it is. And then, as a result, they don’t follow the public health social measures.”

Since the start of the pandemic, more than 1.12 million Indonesians have been pushed into poverty while working longer hours and risking infection. More than two million people fled crowded cities to work in agriculture.

“Unemployment has not dropped sharply—from 6 percent to 7 percent only. But they’re moving from high productivity jobs to low productivity,” says Faisal Basri, an economist at the University of Indonesia.

Many who remained in cities during the pandemic are struggling economically.

“I want everything to go back to normal again, like before the pandemic. There are too many restrictions now, how can I earn money? Many of my regular customers never show up anymore, maybe they’ve gone bankrupt too,” says Yani, a bean sprouts seller who works at the Kebayoran Lama Market in Jakarta. Even though she is putting in longer hours, she now earns half of what she did before the pandemic.

Business is also slow for Ahmad Afwan, a food delivery worker who now sometimes waits hours between orders. “If I don’t earn enough money for our food, I just hope my wife will understand,” he says.

Across the country, 31 percent of families experienced food shortages in the past year, according to a recent U.N. report. Even before the pandemic, more than seven million children in Indonesia were stunted due to malnourishment.

“After the pandemic we probably will have a lost generation—children in this situation cannot get enough good food,” says Hendro Utomo, founder of Foodbank of Indonesia, a non-profit that manages food equity programs and food banks throughout the country. The organization is currently struggling to acquire food donations and protect its volunteers from the recent outbreak. Four team members died from COVID-19 in the past month alone.

Other hunger organizations like Wonderfood Indonesia, which redistributes unsold groceries and food donations throughout Jakarta, stopped delivering 3,500 free meals to low income communities for nearly a month due to recent social distancing restrictions.

What the GDP hides

The top 10 percent of Indonesians became wealthier during the pandemic, says Basri, the economist. He has only seen an economic impact on the rich in Bali because of the lack of tourism.

Basri claims that the government has been reluctant to impose severe lockdowns like those in Wuhan and Northern Italy because the national relief fund cannot financially support those most in need through such a freeze. At the same time, the government gave a major tax break to the automobile industry by temporarily eliminating the luxury tax. “As you can see, there are policies favoring the rich,” says Basri.

Meanwhile, other pandemic measures threaten to permanently widen the gap between the haves and have-nots. Children from working poor parents have a harder time with remote learning, which could lead to a cascade of long-term disadvantages, warns economist Susan Olivia with the University of Waikato in New Zealand. Under the current healthcare strain, people with non-COVID-19 related illnesses will defer care, and children may not receive other vaccines and checkups on time. Stress and food shortages also could have long-term health effects, especially among youth.

“[The government] should use this crisis as a good opportunity for reform,” Olivia says.

Muhammad Fadli is an Indonesian documentary and portrait photographer based in Jakarta. His first book, Rebel Riders, highlights Indonesian extreme scooter subculture . To see more of his work, follow him on Instagram or on his website.