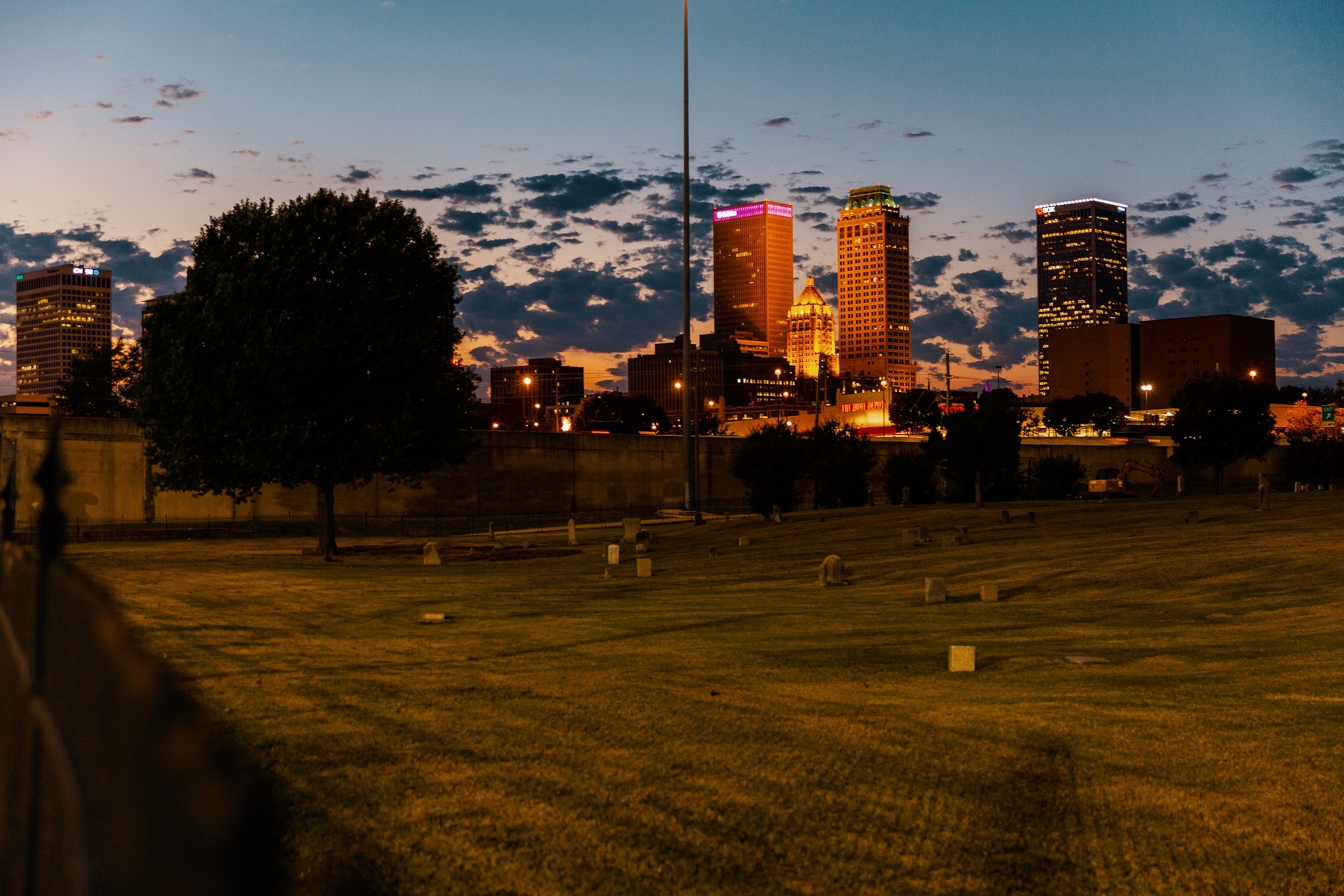 “These are homicides that have to be investigated.” As many as 300 Black people were killed during the massacre—this mass grave may be connected to the 100-year-old crime.

A mass grave was found last week in Oaklawn Cemetery in Tulsa, Oklahoma during a four-day search for victims of the 1921 Tulsa Race Massacre. Ten coffins were found in a trench, but further analysis is needed to determine if those buried are the victims of one of the worst racial terror incidents in United States history.

Tulsa, OklahomaAlmost 100 years after the 1921 Tulsa Race Massacre, a team of archeologists and forensic anthropologists has unearthed a mass grave that may be connected to one of the worst incidents of racial terror against Black people in U.S. history.

The site, containing at least 12 wooden coffins, was uncovered last week in the Potters’ Field section of Oaklawn Cemetery, a city-owned cemetery located just blocks from the historic all-Black community of Greenwood, where as many as 300 Black people were killed during the massacre.

Brenda Alford, a descendant of massacre survivors, told reporters she was deeply moved when the team discovered a mass grave.

“I don’t believe my grandparents could have ever imagined this time in history,” said Alford, whose grandparents survived the massacre. “I am so honored to be here to witness this historical time that they could only have imagined.”

Oklahoma State Archaeologist Kary Stackelbeck described the burial site as “a large hole into which several individuals have been placed in coffins. This constitutes a mass grave.”

Stackelbeck said scientists must conduct further examination to determine whether the bodies are massacre victims. She added that “we have reason to expect” more bodies will be uncovered.

On October 19 archaeologists and forensic scientists began a “test excavation” in a section of the cemetery known as the “Original 18” site. Officials believe that 18 Black people—13 of whom were identified and five of whom were unidentified on a funeral home ledger—could be buried there in unmarked graves.

“We have documentary evidence they were buried by a funeral home paid to do this work,” said Tulsa Mayor G.T. Bynum. The “Original 18” site provided one clue as to where massacre victims were buried, said Bynum. But “that is not the only lead. We have other leads from oral histories. We will continue to find others.”


The “Original 18” site is located near the tombstones of Reuben Everett and Eddie Lockard, the only known marked graves of massacre victims in the cemetery. And during the test excavation, Stackelbeck said, the team discovered steps dug into the mass trench, and evidence that coffins may have been stacked on top of each other.

Please be respectful of copyright. Unauthorized use is prohibited.
Please be respectful of copyright. Unauthorized use is prohibited.
Left: Excavation crews at Oaklawn Cemetery in Tulsa, Oklahoma search for human remains from the 1921 Tulsa Race Massacre. This is the second excavation led by the city this year as it tries to determine where as many as 300 victims of one the nation's bloodiest massacre are buried.
Right: Bill White, the former director of development for the Greenwood Culture Center and Tulsa Regional Chamber of Commerce, watches as crews work on test excavation and core sampling at Oaklawn Cemetery to find the remains of Black victims of the 1921 Tulsa Race Massacre. White created the Greenwood Experience, an exhibit that showcases Greenwood' section of Tulsa's history and business district.

No charges, many questions

The Tulsa Race Massacre began on May 31, 1921, after a white mob tried to lynch Dick Rowland, a Black teenager who was falsely accused of attacking a young white woman operating an elevator in a downtown Tulsa store.

When a group of Black World War I veterans raced to the Tulsa courthouse to protect Rowland, a battle erupted between the veterans and the white mob. A shot was fired, a white man was hit, and chaos erupted. Hours later, a white mob descended on the nearby Black community of Greenwood.

Over the next 18 hours the white mob, including Tulsa police officers and members of the National Guard, shot Black people in cold blood, looting and burning houses. Witnesses said airplanes dropped turpentine onto houses and businesses.

By the time the rampage ended on June 1, Greenwood was reduced to smoldering ashes. More than 35 square blocks of the once prosperous business district, including more than 1,200 businesses, were destroyed. More than 10,000 Black people were without homes. (Remembering ‘Red Summer,’ when white mobs massacred Black people from Tulsa to D.C.)

According to witnesses and historians, city officials rounded up survivors into “concentration camps,” preventing many Black people from burying their loved ones. Survivors recounted seeing bodies of Black people dumped in the Arkansas River, piled onto trucks and trains, and buried in mass graves.

Although some historians believe more than 300 Black people were killed, there is no official count. Despite photographs and even postcards depicting white men standing over the bodies of Black people lying in the streets of Greenwood, no white person was ever charged.

In 1998, then-State Representative Don Ross urged the state to open an investigation into what happened during the massacre, which at that time was known as the “1921 Tulsa Race Riot.” The state created the Tulsa Race Riot Commission, which interviewed dozens of survivors.

In 2018 Tulsa’s current mayor, G.T. Bynum, announced he would reopen the investigation. In October 2019 the city began using ground-penetrating radar to search for mass graves at sites throughout Tulsa. Last December a team of scientists announced it had found anomalies at Oaklawn Cemetery consistent with mass graves. In July they began digging for mass graves but found no human remains. In October the city expanded the excavation.

“I am thankful we are this far in this investigation, that we have found a mass grave,” Bynum said. “Now the question is who is in it and how did they get there?” (Here's how the death of George Floyd connects to this brutal American history.)

Phoebe R. Stubblefield, a forensic scientist from the University of Florida who is working on the city’s physical investigation committee, told reporters in Tulsa that the next phase of the investigation would require permission from a judge to exhume human remains.

“We are working with colleagues in the medical examiner’s offices,” Stubblefield said. “We have to start an exhumation order, which requires a judge’s decision. We want to appeal to a judge that we have grounds to disturb these unmarked individuals. It is an atypical circumstance to have a mass grave of this time.”

Stubblefield explained they are not trying to solve a legal question “with currently living suspects.” Instead, they are investigating a nearly 100-year-old crime. “These are homicides that have to be investigated,” Stubblefield said. “How to pursue an investigation when there is no one to charge is a novel circumstance.”

Before unidentified individuals can be exhumed, a judge needs to take the place of their next of kin, Stubblefield explains. “We don’t know their next of kin. Remember, we are disturbing them, but for a good cause.”