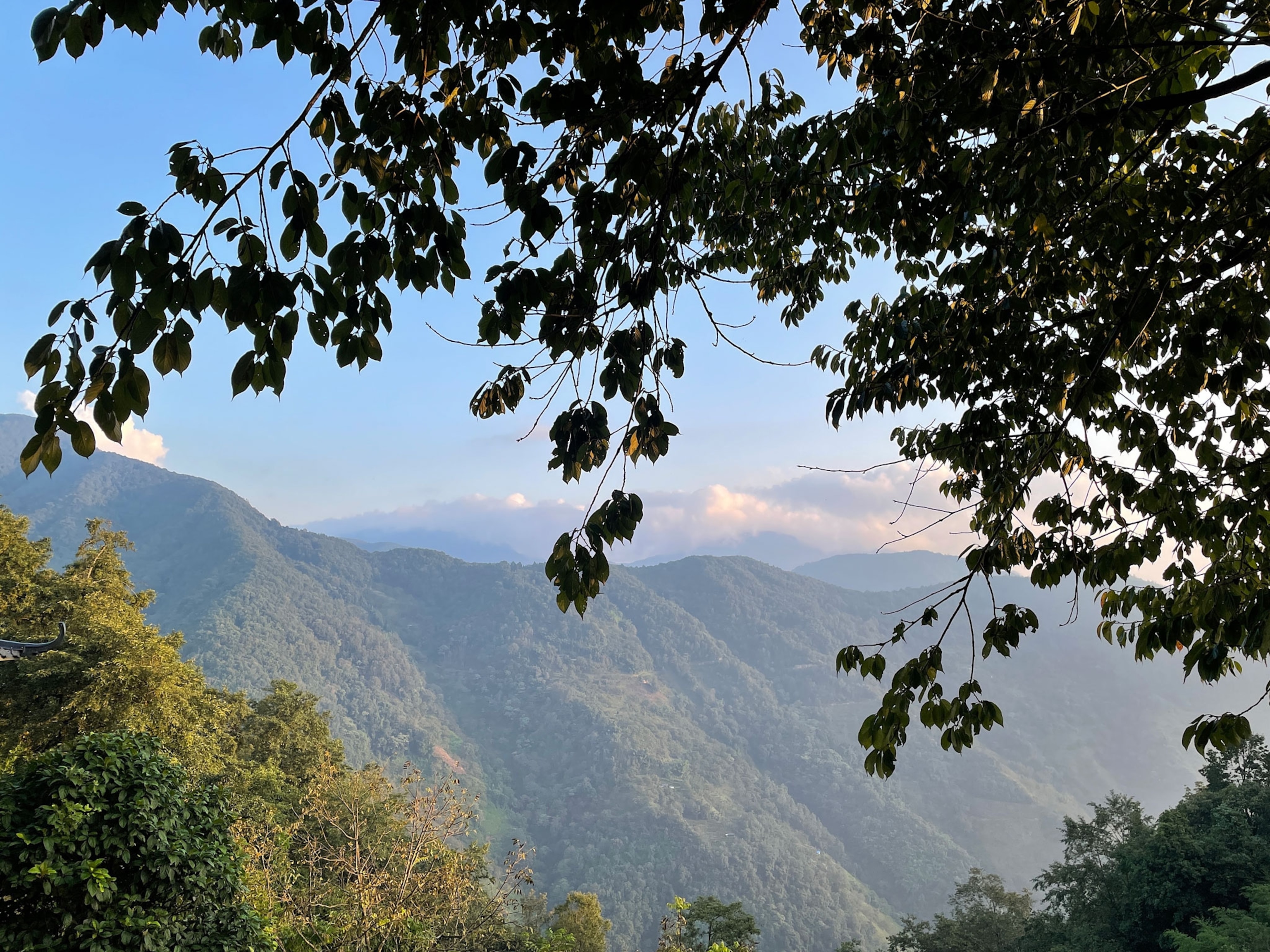 Southwestern China harbors one of the last vaults of biodiversity

A trek across the lush Gaoligong mountains of Yunnan Province offers glimpses of an older Earth teeming with animals and plants.

Writer and National Geographic Society Explorer Paul Salopek’s Out of Eden Walk is a 24,000-mile storytelling odyssey across the world in the footsteps of our human forebears. He sent this dispatch from Yunnan Province, China.

GAOLIGONG MOUNTAINS, YUNNAN PROVINCENear the old Silk Road trading town of Tengchong, hard by the Burma border in the southwestern Chinese province of Yunnan, a green massif parts the sky like the prow of a giant ship. This is the Gaoligong range. Some 300 miles long and topping 16,000 feet, it is an ark of life.

About 5,000 species of higher plants carpet the Gaoligong mountains. (This botanical richness, crammed into a proverbial space the size of Rhode Island, equals a third of all the native flora in the United States.) Almost 700 species of animals, including 154 mammals, 419 birds, 21 amphibians, 56 reptiles, 49 fish, and 1,690 different insects find refuge in the mountain’s steep folds. And for a few days, so do I. Over the past eight years, as part of a global storytelling project called the Out of Eden Walk, I have been hiking continents emptied of their wildlife by human beings. The Gaoligong represent a chance for solace. They are one of the planet’s last remaining vaults of biodiversity: a glimpse into a teeming Earth that once was.

“I got stranded once in the Gaoligong,” Zhang Qing Hua, my walking partner, says. “I couldn’t move.” Zhang grins at the memory. “It was the salamanders. Thousands of them. Tens of thousands. If I moved my feet, I would step on them. They covered the forest floor, coming out to mate. To retreat, I had to walk out through the creeks.”

A young self-taught artist and naturalist, Zhang pauses often at sodden trailsides to sketch flowers and leaves. The plants he cannot identify he annotates with a “?” According to biologists at the Gaoligong National Nature Reserve, which safeguards 1,500 square miles of habitat at the range’s core, several new plant species are discovered each year inside the park. In our age of emergency, when Homo sapiens are blindly driving one million plants and animals into extinction, such a factoid can inspire hope. Until you think about the world beyond the Gaoligong. Then it hollows your heart.

Four of us cross the Gaoligong.

Zhang, who is nicknamed Tùzǐ, or “Rabbit,” botanizes. Li Bing, a jocular wilderness guide, wraps his feet in plastic bags against the monsoon downpours. (He insists this placebo actually works.) Yang Wendou, a member of the Bai ethnic minority in culturally diverse Yunnan, wears a rattan hat shaped like an inverted flower blossom: the headgear of a woodland elf.

We slog east from the frontier town of Tengchong. We follow fading remnants of the southern Silk Road: overgrown trails recalled only by the very old, paved with mossy chunks of slate, built for mule caravans that for centuries traded jade, tea, and silk from Yunnan, Tibet, and Sichuan to markets as distant as Afghanistan. Rain exhaled by the Indian Ocean plummets hard as lead shot onto our flimsy umbrellas. The Yunnan sunshine cascades down golden, like the light of childhood. We push upwards through a trillion wet leaves. Magnolias. Laurels. Oaks. Ferns. Rhododendrons. Featherleaf shrubs. We stop and listen to mostly unseen birds. Warblers. Bulbuls. Flycatchers. Blue-winged minla.

“My wife knows how to cook them well,” Li, our guide, shouts. He swings an arm at the deafening army of cicadas buzzing in the trees. “Deep fried. The trick is to collect them at night.”

We bunk down with cardamom farmers on the forested margins of the mountain preserve. They are ethnic Hui, Chinese Muslims whose ancestors migrated to Yunnan with Mongol armies. I salvage my rain-sodden notebooks using the daughter’s blow dryer. Frogs call in the night—a clicking of neurotic telegraphists. In 2016 a new spadefoot toad, Leptobrachium tengchongense, was discovered in the Gaoligong. In 2017 a new species of gibbon was identified. A new flying squirrel was found and named in 2019.

The next morning in Kunming, the distant capital of Yunnan, delegates from more than a hundred countries gather to discuss how to avert the collapse of the Earth’s ecosystems.

The United Nations 15th biodiversity conference, held this year in China and known as COP 15, is overshadowed by the climate change summit in Glasgow, Scotland.

It’s arguable which of these deeply interlinked crises presents a bigger threat to our survival.

Scientists calculate that an explosion of human impacts over the past century, such as industrial farming, logging, overfishing, pollution—and, of course, human-induced climate change—already have depleted much of the world’s oceans and altered up to 75 percent of the planet’s land surface. The planet’s biosphere, our ecological house, is tottering. It is losing its load-bearing beams. Last year, a global census of wildlife found that the populations of mammals, birds, reptiles, amphibians, and fish worldwide has plunged by 68 percent in just 50 years.

These bleak data certainly matches my boot-level view of the planet.

The Gaoligong mountains provide a glimpse into an Earth that once was.

Since 2013, I have been re-walking the pathways of our ancestors who spread out of Africa during the Stone Age, writing stories along the way. On my 12,000-mile route, only two isolated landscapes supported a tangible presence of wild creatures. The first was the Rift Valley of Ethiopia, where some of the hottest temperatures on Earth keep human populations low. Ostriches and antelopes still roamed that desert. The second was the remote mountains of northeastern Afghanistan, where extreme cold and rocky soil also acted as a human filter. Mountain sheep and snow leopards bounded across those freezing scarps. For thousands of walked days in between, I paced off an endless succession of farmed and urbanized horizons stripped of their biological diversity.

And then there’s the reckless cost of waste of nature’s genetic legacy.

Dripping sweat atop the Gaoligong’s slick clay trails, I spot a dark form flit from the ground into the trees. It is Gallus gallus, the red junglefowl, a wild Asian ancestor of what is by far the most abundant bird on Earth today: the 65 billion commercially bred chickens eaten by humans every year.

“There is a saying, ‘You cut my trees? I cut your hand,’” says Bi Zheng, an administrator at the Gaoligong reserve, describing the zealous conservation ethic of Indigenous farmers living near the mountains. “They look on the mountains as a parent. We should too.”

Yunnan was chosen to host the COP 15 conference for a reason. The frontier province holds China’s most lavishly biodiverse landscapes.

Stretching 560 miles from subtropical jungles on the Myanmar border to the great ice mountains ringing Tibet, the region is a crumpled checkerboard of habitats. Radical elevation shifts nurture at least five vegetation zones that yo-yo from swamps near sea level to tundra above 22,000 feet. The Asian and Indian tectonic plates ram together in Yunnan, accordioning a series of parallel and nearly inaccessible mountain ranges. One footsore Ming Dynasty explorer, Xu Xiake, who crossed Yunnan in the 17th century, described his route as a dizzying zigzag “just as if I had been weaving.” At their heart rise the Gaoligong.

And in the Gaoligong we find Yang Xue Liu.

Yang is 74. He smokes a hand-rolled and carries a slinged, rusty bayonet apparently of World War II vintage. He a herbalist. He sits on a corner in the village of Machangcun selling wild plants. There is ku lian jiu mu, or “bitter lotus to save mother,” which cleans blood. There is lao ren chugun, or “old man’s pestle stick,” which eases coughing. I recognize bi guan cao, or “pen tube grass,” as Equisetum, a hundred-million-year-old plant being used to treat chest infections.

“If people know plants,” Yang shrugs, “then they’ll use them.”

He says fewer and fewer do.

At the UN biodiversity conference, China, Europe, and Japan vowed to dramatically expand funding for programs that protect species and natural habitats across the globe. (Only the U.S. and the Vatican haven’t signed the international convention.)

“We declare that putting biodiversity on a path to recovery is a defining challenge of this decade,” the Kunming declaration reads. The delegates promised to implement policies that will begin mending the Earth’s fabric of life “by 2030 at the latest.”

We walk on—out of the Gaoligong’s buffer zones toward the east, skidding down through plantations of coffee, tea, pears, pomegranates. In the Lu River watershed, we

come across an old, remote, and beautiful stone-walled village abandoned in the forest. Its inhabitants have relocated years before to the valley far below. They have new houses and electricity. Shading up under a quince tree heavy with unpicked fruit, I watch their silent verandas. It is hard not to imagine a world without us.

Sixty miles later, in a human-planted conifer forest far beyond the high Gaoligong, Zhang, our team’s indefatigable young Linnaeus, reaches down to the road.

The National Geographic Society, committed to illuminating and protecting the wonder of our world, has funded Explorer Paul Salopek and the Out of Eden Walk project since 2013. Explore the project here.