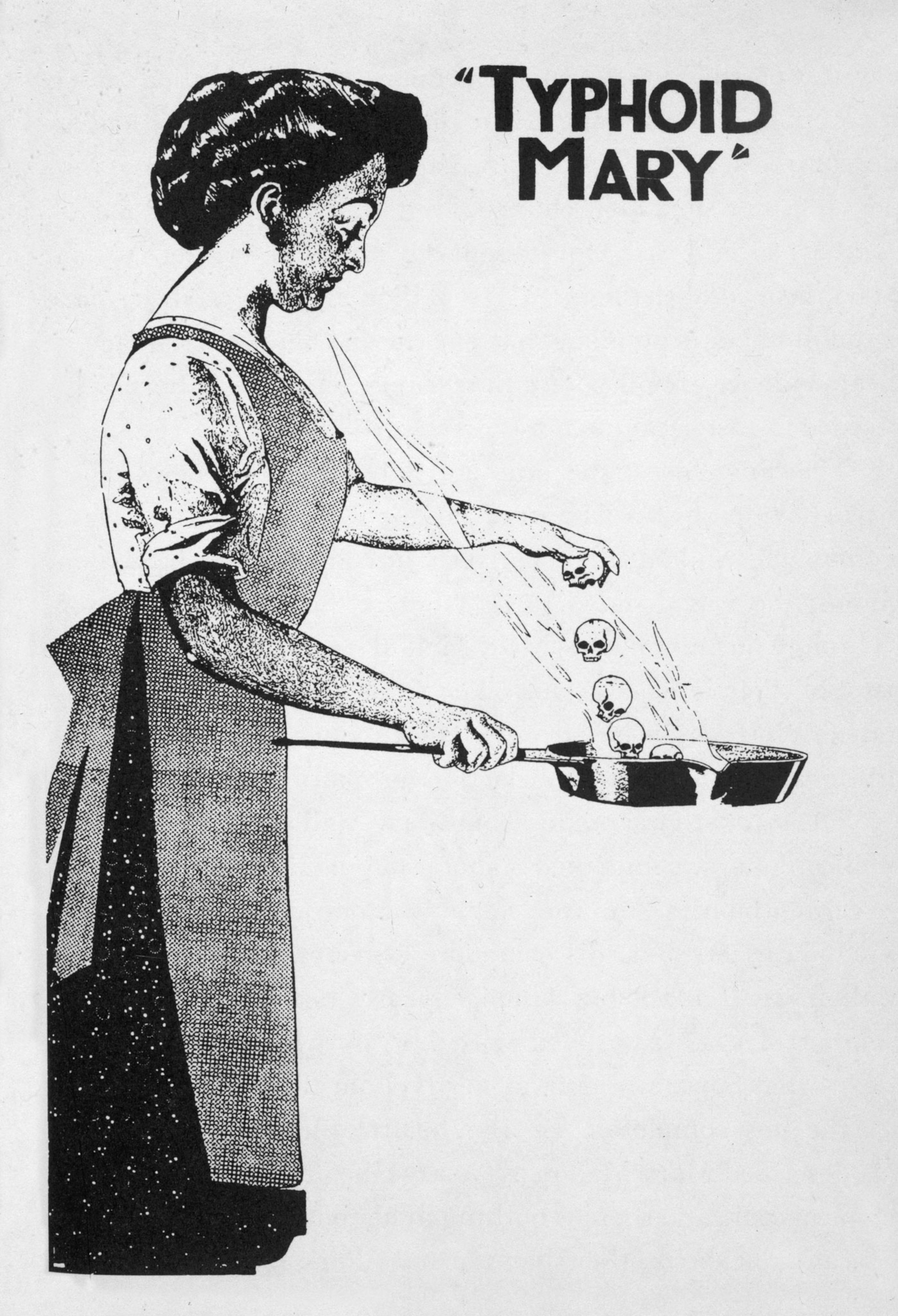 Tracking down the culprit behind an outbreak of typhoid fever in 1900s New York was a breakthrough in how symptom-free carriers can spread sickness.

An Irish cook named Mary Mallon was the first person identified as being the carrier in a typhoid outbreak. The media dubbed her "Typhoid Mary," and her trial and forced quarantine captured public attention. In this illustration, published around 1909, she is depicted breaking skulls into a skillet.
Chronicle, Alamy

George Soper was not your typical detective. He was a civil engineer by training, but had become something of an expert in sanitation. So when, in 1906, a landlord in Long Island was struggling to trace the source of a typhoid outbreak, Soper was called in. The landlord had rented his Long Island house to a banker’s family and servants that summer. By late August, six of the house’s 11 inhabitants had fallen ill with typhoid fever.

Soper had been previously hired by New York state to investigate disease outbreaks—“I was called an epidemic fighter,” he later wrote—and believed that typhoid could be spread by one person serving as a carrier. In Long Island, he focused his attention on the cook, Mary Mallon, who had arrived three weeks before the first person became ill.

What Soper discovered would demonstrate how an unwitting carrier could be the root of disease outbreaks, and, later, spark a debate about personal autonomy when it’s pitted against public health.

Combing through the roster of wealthy New Yorkers who had employed Mallon in their summer homes between 1900 and 1907 he found a trail of 22 infected people. Typhoid fever is a bacterial infection typically spread through food and water contaminated by salmonella. Patients fall ill with high fever, diarrhea—and, before antibiotics were developed to treat it, sometimes delirium and death.

At that time, without regulated sanitation practices in place, the disease was fairly common and New York had battled multiple outbreaks. In 1906, the year Soper began his investigation, a reported 639 people had died of typhoid in New York. But never before had an outbreak been traced to a single carrier—and certainly not one without any symptoms themselves.

Soper learned that Mallon would often serve ice cream with fresh peaches on Sunday. Compared to her hot, cooked meals, he deduced that “no better way could be found for a cook to cleanse her hands of microbes and infect a family.”

Four months after he started the investigation, Soper found Mallon working in a Park Avenue brownstone. The 37-year-old Irish cook, he later described, was “five feet six inches tall, a blond with clear blue eyes, a healthy color and a somewhat determined mouth and jaw.” When confronted with his evidence and a request for urine and feces samples, she surged at Soper with a carving fork.

Dr. S. Josephine Baker, an up-and-coming advocate of hygiene and public health, was dispatched to convince Mallon to provide samples, but was also chased away. Baker, whose father had died of typhoid, later made it her mission to promote preventative medicine (and became the first woman to earn a doctorate in public health). “It was Mary’s tragedy that she could not trust us,” Baker later wrote.

Finally, Mallon was escorted by Baker and five policemen to a hospital where—after a nearly successful escape attempt—she tested positive as a carrier for Salmonella typhi, a bacteria that causes typhoid. This would later be confirmed by more tests. She was quarantined in a small house on the grounds of Riverside Hospital. The facility was isolated on North Brother Island, a tiny speck of land off the Bronx.

Mallon herself had no symptoms of typhoid and didn’t believe she could be spreading it. It’s likely Mallon never understood the meaning of being a carrier, particularly since she exhibited no symptoms herself. The only cure, doctors told Mallon, was to remove her gallbladder, which she refused. She was dubbed “Typhoid Mary” by the New York American in 1909 and the name stuck.

In a hand-written letter to her lawyer that June, Mallon complained. “I have been in fact a peep show for everybody. Even the interns had to come to see me and ask about the facts already known to the whole wide world. The tuberculosis men would say ‘There she is, the kidnapped woman,’” she wrote. “Dr. Park has had me illustrated in Chicago. I wonder how the said Dr. William H. Park would like to be insulted and put in the Journal and call him or his wife Typhoid William Park.”

In 1909, she sued the New York City Department of Health and the case was brought to the Supreme Court. In the court of public opinion, Mallon had stirred a debate over individual autonomy and the state’s responsibility in a public health crisis. In the court of law, her lawyer argued she had been imprisoned without due process.

The court declined to release her, saying “it must protect the community against a recurrence of spreading the disease,” but Mallon was freed early the following year by the city’s new health commissioner. He agreed on the condition that she stop cooking.

Without other skills and unconvinced that her condition was a danger, Mallon drifted back to her old job around New York and New Jersey. She prepared meals for a hotel, a Broadway restaurant, a spa, and a boarding house. When, in 1915, a typhoid outbreak sickened 25 people at Sloane Maternity Hospital, George Soper was again called to investigate. The cook, “Mrs. Brown,” was discovered to be Mallon.

A life in exile

Mallon was sent back to North Brother island—permanently. She spent her days reading and working in the laboratory preparing medical tests. She died there of a stroke in 1938, after a quarter-century of quarantine. She never admitted to being a carrier of typhoid, and perhaps without the education to understand it, actually never believed it. Nine people attended her funeral at St. Luke’s in the Bronx.

During the course of two outbreaks, at least 51 people caught typhoid through Mallon, and three died. The number of cases was probably much higher. “The story of Typhoid Mary indicates how difficult it is to teach infected people to guard against infecting others,“ Soper warned. But the authorities had already changed the way they responded to such threats. At the time of Mallon’s death, more than 400 healthy carriers of typhoid who had been identified by New York officials, and none had been forced into confinement.

The legacy of “Typhoid Mary” as an asymptomatic vessel for disease led to the theory of “superspreaders” that has surfaced in disease outbreaks ever since. “Since ‘Typhoid Mary’ was discovered, the whole problem of carriers in relation to infectious diseases has assumed an immense importance,” Soper said in a speech in 1913, “an importance which is recognized in every country where effective public health work is done and in every army where communicable disease has been brought under control.”