The story of New France: the cradle of modern Canada

Starting in the 16th century, French fur traders and brides-to-be sought their fortunes in the colonies—stoking tension with indigenous people.

In 1534, Jacques Cartier began the first of three expeditions to explore the territory that would briefly be known as New France. Though his attempts at settlement failed, Cartier—depicted here erecting a cross in the village of Stadacona, where the city of Quebec now stands—was the first to accurately map the interior of the St. Lawrence River.

The story of New France: the cradle of modern Canada

Starting in the 16th century, French fur traders and brides-to-be sought their fortunes in the colonies—stoking tension with indigenous people.

France flirted with the New World for years, but it took several attempts to make French settlement stick. Between the 16th and 18th centuries, French settlers finally managed to take hold of a wild and wealthy land and turn it into an influential colonial outpost. New France, as this land was once called, consisted of five colonies that covered a massive swath of North America, stretching from Hudson Bay in the north to the Gulf of Mexico in the south. The land became home to fur traders, state-sponsored brides, soldiers—and the indigenous people who had been there for thousands of years.

The intertwined lives of the people of 1690s New France are depicted in the upcoming National Geographic limited series Barkskins, which premieres on Memorial Day. Based on the bestselling novel by Annie Proulx, the eight-part series explores a mysterious massacre that threatens to throw the region into war and reveals the tensions and complexities of French colonization in North America. 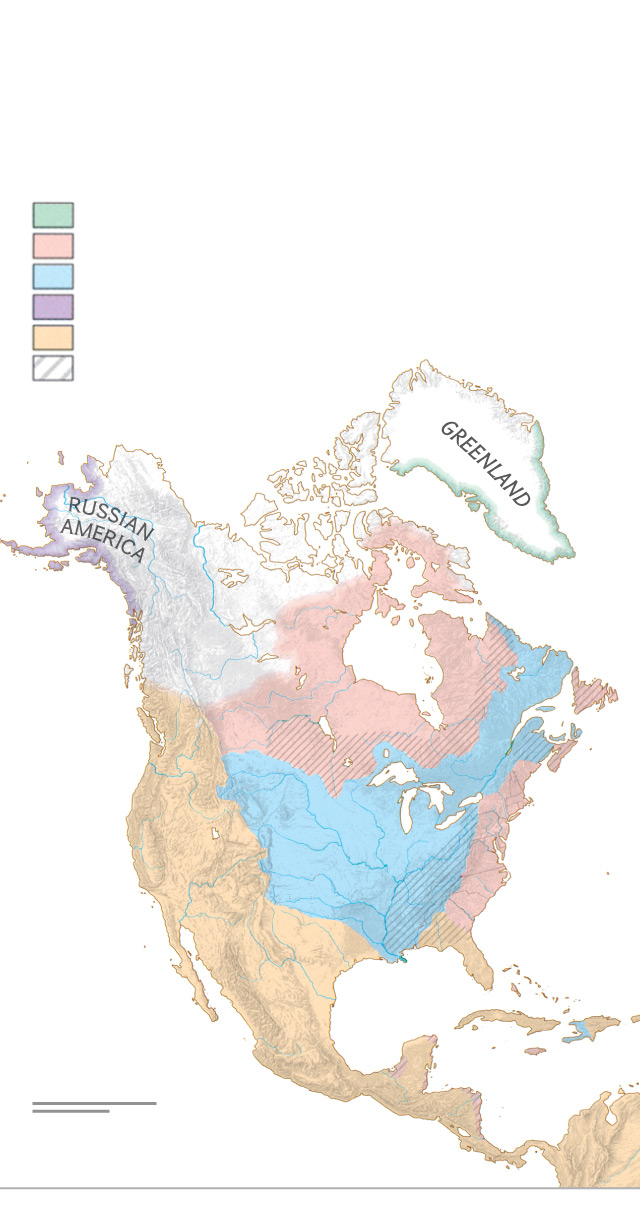 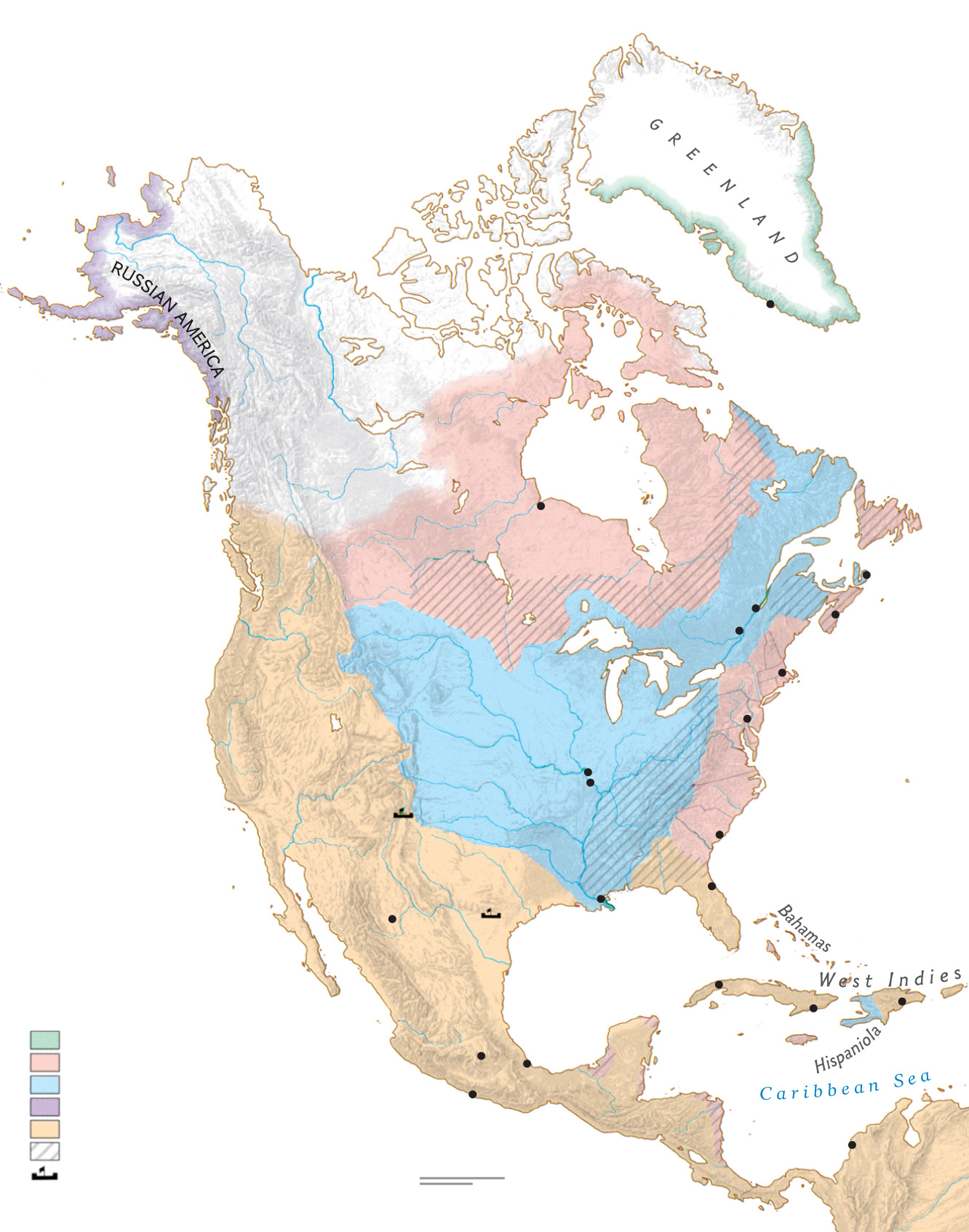 What was New France really like? You’ll get a glimpse into the territory’s history and culture by focusing on its most populous and economically powerful colony. Though it only existed between 1608 and 1763, the colony of Canada produced a distinct language, culture, and history that still reverberates in the modern nation known as Canada.

In 1534, Jacques Cartier had begun the first of three expeditions to the Gulf of the St. Lawrence River. But Cartier’s brief attempts at settlement were a failure, and after conflicts with local Iroquois people and failed attempts to exploit the natural resources there, he returned to France.

The French crown’s plan was to let trading companies run New France and draw settlers there in exchange for the right to take advantage of the colonies’ natural bounties, the most lucrative of which were the large population of native animals.

Champlain envisioned building a profitable fur trade in Canada. But the colony floundered at first due to a lack of settlers, difficulties accessing the riches Champlain had boasted about, and conflict with the Iroquois.

Life in Canada was challenging. French colonists struggled with the region’s harsh winters and uncleared land. Canada was largely dependent on agriculture and the fur trade, which brought colonists in conflict with the people whose land they had claimed for France.

Haudenosaunee people, also known as Iroquois people, had inhabited what is now the country of Canada for thousands of years, developing complex societies and establishing trade routes throughout the area. By the time European settlers arrived in 1608, five Iroquois nations, the Seneca, Oneida, Mohawk, Cayuga, and Onondaga, had joined together into the Haudenosaunee, or Iroquois, League. As European settlement picked up, League nations and their rivals became increasingly interdependent with the settlers.

Indigenous people knew how to trap and skin beaver and other animals, prized for their use in hats and other products. They traded their pelts for the European settlers’ goods, such as guns, cloth, and metal. They also helped French settlers navigate waterways and forests. At first, indigenous trappers collected, processed, and transported almost all of the furs the colony produced.

The fur trade benefited both the French and their indigenous trading partners. But it also stoked decades of rivalries, violence, and all-out war as the fur trade transformed the landscape, the economy, and indigenous groups’ traditional ways of life.

The Iroquois and other indigenous people traditionally shared their hunting grounds with members of their tribe and their allies, only hunted as much as was necessary, and respected the land and animals as part of their spiritual beliefs. But the colonists demanded many more furs than indigenous groups usually hunted. In response to that demand, indigenous people hunted more, traveled longer distances than usual, and shifted toward individualism.

As overhunting depleted the number of beaver and deer in Iroquois territory, the Iroquois attempted to wrest control of more territory for trapping and hunting. Throughout the 1630s and 1640s, they also began to attack their indigenous rivals—and anyone who allied with them, which in some cases included French colonists.

Hunting territory wasn’t the only thing at stake for the Iroquois. They believed that family members who had been lost at the hands of their rivals or through deadly diseases brought by colonists had to be replaced by captives, and that carrying out retaliatory attacks was a way of honoring their dead. This led to a series of what historians have called “mourning wars”: guerrilla raids prompted by deep grief.

The tragic combination created what historian Daniel Richter has called a dangerous spiral: “Epidemics led to deadlier mourning-wars fought with firearms; the need for guns increased the demand for pelts to trade for them; the quest for furs provoked war with other nations; and deaths in those conflicts began the mourning-war anew.”

New France’s inhabitants were deeply shaken by Iroquois raids. War parties would unexpectedly storm isolated settlements or farms, massacring residents and sometimes taking prisoners. Thousands of miles away, the French government decided its investment in New France was not paying off and did not step in to protect colonists. Trade suffered as colonists tried to defend themselves.

“A woman lives with the constant fear that her husband, who has left that morning to work, will be killed or captured and that she will never see him again,” wrote Pierre Boucher, who governed the small settlement of Trois-Rivières. Boucher developed a successful defense strategy for Trois-Rivières, securing the settlement during a nine-day siege in 1653 and eventually brokering a peace with the attackers.

Elsewhere, the Iroquois successfully fought most of their indigenous rivals. And many of their raids against the French were successful; by the 1660s, they controlled much of the countryside within New France.

After 55 years of oversight by trading companies, New France was turned over to royal rule in 1663. Louis XIV tried to reverse New France’s fortunes by investing more in its most promising colony, Canada. The crown paid for its citizens’ passage to New France, which increased its population, and eventually Canada was split into three districts, Quebec, Trois-Rivières, and Montreal.

But the population still foundered, in part due to a gender imbalance between the colony’s 3,000 men—including soldiers, woodsmen, fur traders, and merchants—and its few women. In 1663, there was just one woman for every six men in New France. To fix the imbalance, increase the colony’s population, and induce French men to stay in New France, the crown paid for nearly 800 women to travel to New France as state-sponsored brides.

Recruited and outfitted with the funds of Louis XIV himself, these filles du roi, or daughters of the king, were sent to New France on the royal dime between 1663 and 1673. Most were poor women between the ages of 16 and 40 who came from urban areas throughout France. In addition to their passage, about half were given dowries and trousseaus, which included items like needles, gloves, and shoelaces that were hard to come by in the rugged colony.

At home, the filles du roi would have faced uncertain fates with low or nonexistent dowries, poverty, and a reliance on male family members to select their partners. Just by surviving the passage to New France, the filles du roi found themselves with more power and higher chances of prosperity than they would have had in Europe. Armed with hope chests and a promising future, they boarded ships to Canada.

When the women arrived, they were housed by nuns who taught them domestic skills, tried to orient them to the rigors of colonial life, and oversaw their whirlwind courtships along with Jean Talon, the colony’s top administrator. Unlike at home, the filles de roi had the freedom to choose their husbands. They interviewed potential mates in speed-date-style meetings as they went from town to town along the St. Lawrence River; if they did not like the selection, they could simply move on. Most married almost immediately, though.

Once married, the filles du roi were encouraged to have as many children as possible; the crown promised a financial bonus to any woman who bore more than 10 children. And because food was so plentiful in the colony, the filles du roi were more likely than their counterparts in continental France to survive their pregnancies and produce healthy, surviving children.

Peace with the Iroquois

The filles du roi weren’t the only people Louis XIV sent to New France. In 1665, the French crown ordered a group of French soldiers to reinforce New France and protect its investments there.

When about 1,200 soldiers arrived in the colony—around the same time as the filles du roi—they were greeted as rescuers. Though they were poorly outfitted and ill-equipped to deal with the guerrilla tactics of their Iroquois rivals, their arrival put France at a tactical advantage. The Iroquois League, weakened by decades of warfare, offered peace. In 1667, New France and the Iroquois League signed a peace treaty that would last 20 years.

But permanent peace wouldn’t come until the turn of the century. In 1683, war broke out again in response to colonists’ increasingly aggressive attempts to secure more hunting territory, and France again sent troops to New France. For the next 15 years, the second phase of what were known as the Beaver Wars pitted the colonists against the indigenous groups whose land they had claimed as their own.

The fall of New France

By the beginning of the 18th century, New France had expanded its boundaries and contained about 20,000 citizens overall. But French fortunes in the area were destined to fall. Despite a booming population and economy during the early 1700s, New France spent most of its money on military preparations that were ill-suited to colonial realities. And though its peace with local indigenous people held, France could not fend off war against its biggest colonial rival, Britain.

In 1756, the Seven Years’ War pitted the relatively tiny population of French colonists against the much greater number of colonists in British-held America. New France ended with France’s defeat in the Seven Years’ War, and its holdings were handed over to the British in the Treaty of Paris in 1763. (Here’s how the U.S. doubled in size with the purchase of one of France’s former holdings.)

Despite its relatively short life of 155 years, New France forged a legacy that can still be felt in modern Canada. Even under British rule, writes historian Jacques Mathieu, the residents of what was once New France “refused assimilation and affirmed their existence. Protected by their language, religion and institutions, concentrated in a limited geographic area, difficult to penetrate, they developed a way of life, social customs and attitudes of their own.”

That way of life came at a tragic cost for the Iroquois and other indigenous groups whose traditional ways were ravaged by the fur trade that kept New France afloat. Disease and war caused significant population declines, and though they retained their independence after the Beaver Wars, the Iroquois continued to face pressure from colonists intent on dominance in the new world.