The Many Colors of Matrimony

Marrying across racial and ethnic lines has become more common, and more accepted, in the 50 years since a landmark U.S. Supreme Court ruling.

This story is part of The Race Issue, a special issue of National Geographic that explores how race defines, separates, and unites us. Tell us your story with #IDefineMe.

Halil proposed to Jade by writing WILL YOU MARRY ME in the sand on a beach. Both wanted a small, frugal wedding. Jade wore a Rent the Runway dress for their vows, witnessed by a few friends, at the city clerk’s office in Manhattan.

Jade Calliste-Edgar is an African-American woman raised in Florida. Halil Binici is a Turkish man raised in Istanbul. The two 23-year-olds live in New York City, where Halil works as a cameraman and Jade is in graduate school, studying to be a mental health counselor. During two days in fall 2017, they were one of numerous pairs of mixed race or ethnicity who tied the knot at the Manhattan marriage bureau, then happily posed for National Geographic photographer Wayne Lawrence.

Jade and Halil also are part of a cultural shift. In 2015, 17 percent of U.S. newlyweds had a spouse of a different race or ethnicity, according to a Pew Research Center analysis of Census Bureau data. That’s roughly a fivefold increase since 1967, when the U.S. Supreme Court’s ruling in Loving v. Virginia made interracial marriage legal. Simply put, Pew reported, “Americans have become more accepting of marriages involving spouses of different races and ethnicities.”

The Loving decision invalidated state laws banning interracial marriage, which 17 of the 50 states still had at that time. Changing the law was a start—but it didn’t “necessarily do anything to change people’s minds,” says Syracuse University law professor Kevin Noble Maillard, who writes frequently about intermarriage.

Maillard suggests that the growing acceptance of interracial marriage in the past 50 years—and of same-sex marriage in the past dozen years—has been influenced by shifting social norms and by public and media validation. Partners of different races or ethnicities are nothing new, he notes: “But it’s very different when there’s public recognition of these relationships and when they become representations of regular families—when they’re the people in the Cheerios commercial.”

Jade says that she and Halil haven’t experienced overt hostility when they’re out together, though sometimes there are dirty looks or muttered insults. Both of them feel that by being a couple they’re promoting important principles: “That we’re all human beings and there’s nothing inherently different between us.”

That’s the point of the meme that the two posted on Facebook shortly before they married. It’s two photos side by side. The first shows two eggs, one brown shelled and one white shelled. The second shows the eggs cracked into a skillet, looking very much alike. The caption: “Let that sink in for a minute, America!”

steadily in the half century since the

couples went from one in 33 to one

for one in 10 marriages overall.

among men and women, more

common among Asians and

Hispanics than other racial and

among black men than black

women and Asian women than

U.S. newlyweds with partners of another group

by race or ethnicity

with this racial or ethnic

Data on intermarried same-sex couples are

limited. But statistically, partnering across

people in the U.S.

by race or ethnicity

with husbands outside their group

COMBINATIONS THAT ADD UP TO LESS THAN 0.1

PERCENT ARE EXCLUDED. ASIANS INCLUDE PACIFIC

INDIANS INCLUDE ONLY NON-­HISPANICS. HISPANICS

ARE OF ANY RACE. INTERMARRIAGES ARE UNIONS

ACROSS RACE AND/OR ETHNICITY. 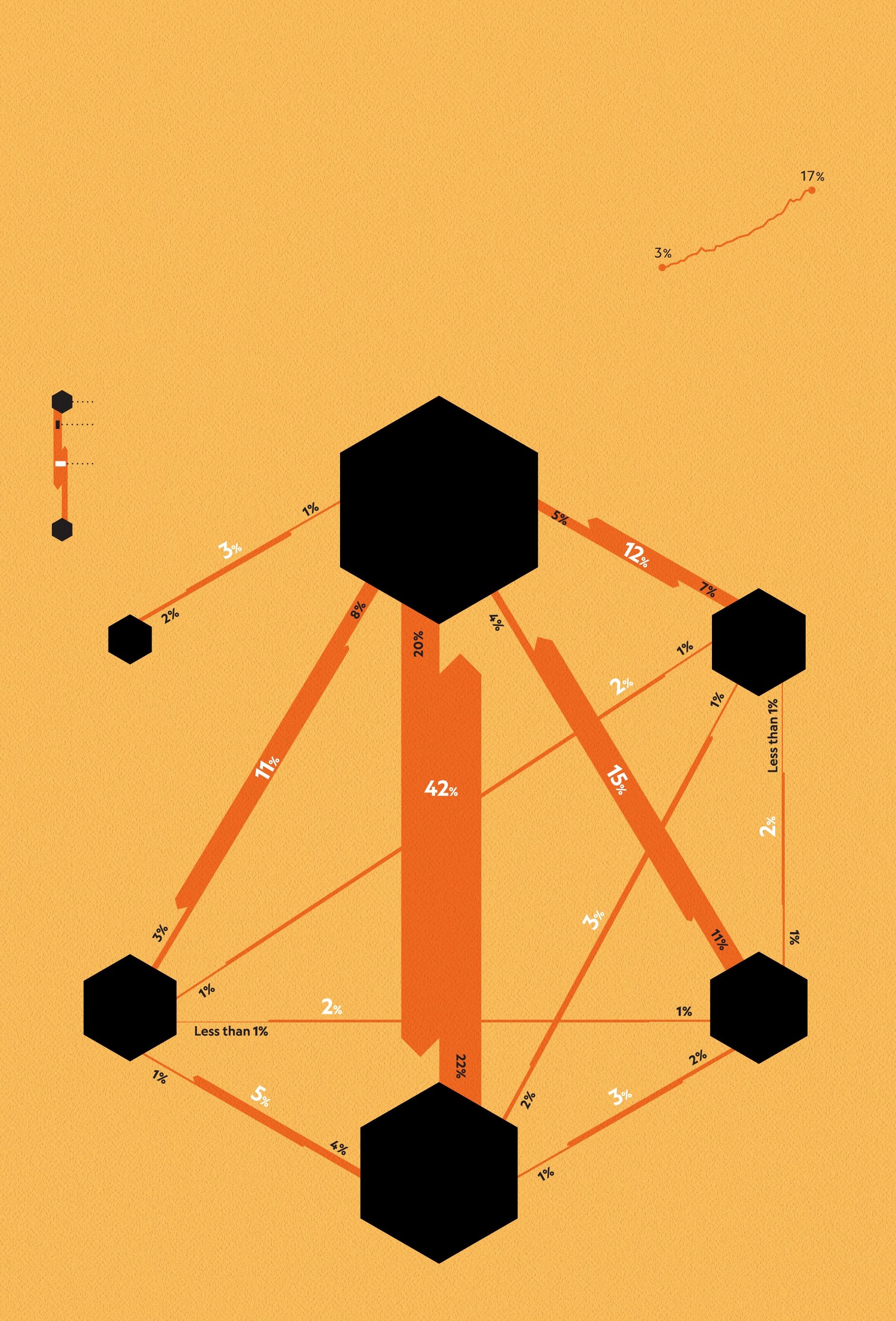 Intermarriage rates have climbed steadily in the half century since the

that banned interracial marriage. From then until 2015, the share of

newlywed intermarried couples went from one in 33 to one in six. Today

such couples account for one in 10 marriages overall. Intermarriage is

and Hispanics than other racial and ethnic groups, and more common

among black men than black women and Asian women than Asian men.

Intermarried newlyweds, by race or ethnicity

sex couples are limited. But

with husbands outside their group

with this racial or ethnic

in the U.S. married

across racial or ethnic

COMBINATIONS THAT ADD UP TO LESS THAN 0.1

PERCENT ARE EXCLUDED. ASIANS INCLUDE PACIFIC

INDIANS INCLUDE ONLY NON-

ARE OF ANY RACE. INTERMARRIAGES ARE UNIONS

ACROSS RACE AND/OR ETHNICITY.

Wayne Lawrence is a widely published documentary photographer whose stated focus is “communities otherwise overlooked by mainstream media.” His work has been exhibited at galleries and institutions including the Bronx Museum of the Arts.