Out of Eden Walk

A Historic Journey Proceeds Across the Roof of the World

As he retraces our ancestors’ global migration on foot, the author sees Afghanistan's peaceful villages—and reminders that tensions persist.

Read Caption
Contending with snow, cold, and a tired donkey, Paul Salopek takes his last steps in Afghanistan’s Wakhan corridor as he and photographer Matthieu Paley navigate the Irshad Pass into Pakistan. The ascent was supposed to take three hours, but it ended up taking nine. At the top of the pass, the clouds cleared as the sun set. “I was struck, despite exhaustion, by the light,” Salopek says. “It was the sort of light you associate with birth—light you are born into."

A Historic Journey Proceeds Across the Roof of the World

As he retraces our ancestors’ global migration on foot, the author sees Afghanistan's peaceful villages—and reminders that tensions persist.

This story appears in the September 2018 issue of National Geographic magazine.

Her hair was dyed purple. She wore spandex. She was dancing alone, the young foreigner, swaying barefoot on the roof of a car parked at an utterly remote frontier in the rocky core of Asia, hard beside the Panj River that saws Tajikistan from Afghanistan—a notorious opium smugglers’ paradise at the southern edge of the Pamir mountains. The car had EU plates. But who was she? A belated pilgrim on the old hippie trail? A mystic? An addict? A tourist? An adventurer? It was impossible to know.

I raised my sweat-pickled hat in greeting as I shuffled past, chivying a tired cargo donkey, wind-chapped, and hollow-bellied from camping more than a month among the crags of Central Asia. I am walking across the world. For five years I have been pacing off the Earth as part of a project called the Out of Eden Walk, a storytelling pilgrimage along the pathways of the first ancestors who explored the planet during the Stone Age. To walk in this way—continuously, day after river, month after continent, over a route that eventually will span 21,000 miles—is to inhabit a state of daily wonderment. So the wilderness dancer was not really a surprise. Nor did I startle her. She didn’t see me. Lost in the techno beats punching out of her car’s stereo, she never even opened her eyes.

“She makes me feel old,” complained photographer Matthieu Paley after we had trudged by on the dirt road built by the Soviets.

Paley was voluble and earthy, a French Zorba. He was joining me for a rare foot crossing of Afghanistan’s Wakhan corridor, a forgotten redoubt tucked high behind the mountain walls of the Hindu Kush. In the mornings he performed yoga on the road to soothe a tricky back. Expanded font settings on my laptop were my own concessions to middle age. But I didn’t feel old. Not at all. Walking the Earth makes you a child again. By the time I eventually reach Tierra del Fuego, my destination six or seven years away, I will be newborn.

Paley was doing a Wakhi dance now—paddling his arms and shimmying his hips along the desolate banks of the Panj. Across the glacial currents in Afghanistan, a few delighted Wakhi shepherds in dirt-brown shalwar kameezes gathered to mimic his moves. Everyone dances in Afghanistan. During the war, in the early 2000s, I had danced into Kabul with a column of Northern Alliance troops, two-stepping behind a T-55 tank to avoid land mines: a combat conga line. I remember how one fighter broke ranks to pillage a farmhouse. A booby trap blew off his feet with a dull pop. This was a long time ago. It was before I began truly to walk, back when I was a million or more years old.

The Wakhan corridor of Afghanistan is one of the remotest inhabited landscapes on Earth. An extension of Badakhshan Province, it juts some 200 miles between Tajikistan and Pakistan to touch the ice-capped ramparts of western China. Drawn by Russia and Britain as a buffer zone to separate their Asian empires in the 19th century, the corridor—marooned by rugged geography, geopolitics, and time—endures as a forgotten appendage of Afghanistan. About 17,000 farmers and nomads still live in its medieval pastures and rock-walled hamlets. It was my exit ramp to South Asia.

We crossed the Tajikistan border at Ishkashim. Sixteen years had elapsed since I had trodden Afghanistan’s dust as a war correspondent. It wasn’t the land I remembered.

My Afghan memories cartwheeled among armed men in Hilux pickup trucks and the concussions of 500-pound bombs dropped by American B-52s. Walking through the war, I had stepped unconsciously around the domes of silence that always encased the newly dead. By contrast, the Wakhan corridor—poor, utterly isolated, and shielded from violence by the Hindu Kush—seemed an oasis of peace. We hiked unafraid through fields of ripe wheat where men drove teams of oxen in circles, threshing sheaves in biblical fashion. Antique waterwheels milled their flour. The local Wakhi farmers were easygoing Ismailis, and the women went about unveiled. The farmers stacked the magnificent horns of wild Marco Polo sheep at sacred springs. Snow leopards, not militants, patrolled the snow peaks. Nobody carried guns. It was rural Afghanistan as it should be.

“We’re in our glory times,” said Dervish Ali, a sheepherder whose homestead clung like a swallow’s nest to a steep riverbank. “In the 1990s we couldn’t even afford tea. Now life is good.”

Paul Salopek’s 21,000-mile Out of Eden Walk traces human migrations from East Africa to the southern tip of South America. This section weaves through Kyrgyzstan, Tajikistan, Afghanistan, and Pakistan.

Distance from Osh to the Irshad Pass: 620 miles

Paley, and their guide. 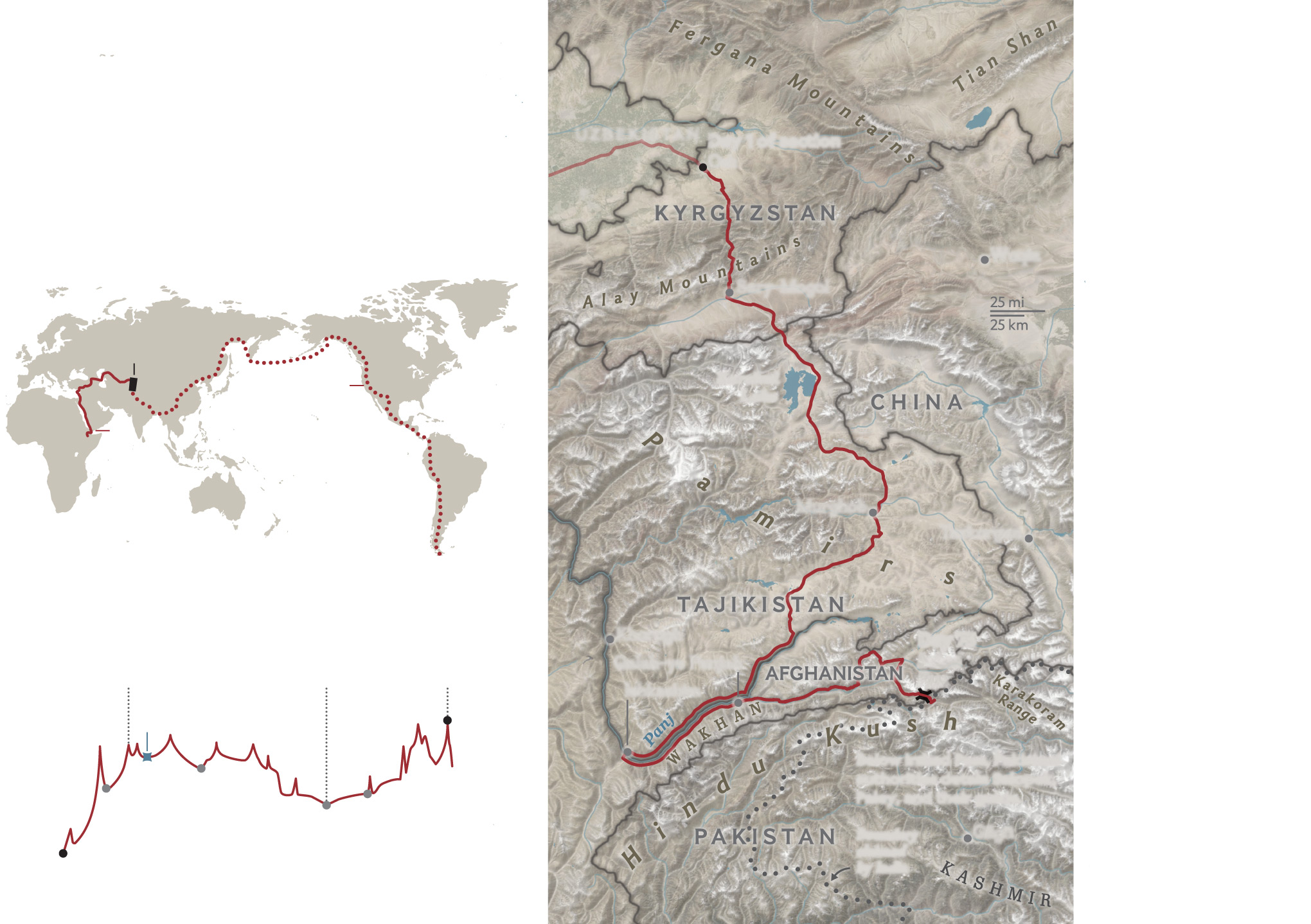 Paul Salopek’s 21,000-mile Out of Eden Walk traces human migrations from East Africa to the southern tip of South America. This section weaves through Kyrgyzstan, Tajikistan, Afghanistan, and Pakistan.

Distance from Osh to the Irshad Pass: 620 miles

Paley, and their guide.

Ali’s friendly wife, Kushnamamash, baked us hot, gritty naan—flatbread. We pitched our tents on the couple’s narrow grass terrace. Ranks of poplars rustled in a silver breeze. The austere Wakhan was experiencing a green revolution. Tree plantations were shading the once naked canyon bottoms, and some Wakhi were tasting their first homegrown tomatoes and squash. It was the changing climate. Apricots were blossoming two months early, and a sudden tide of glacier melt was making irrigation easier.

It won’t last, of course. Someday the glaciers of the Hindu Kush and Pamirs will drain away, and the old hungers will return. But for those shining days on foot, the roadless valleys of the Wakhan felt like a place I’d been walking toward my entire life without knowing it. Slate river shingle rang underfoot like coins. Crows pinwheeled in seamless blue skies. In September the high pastures of the Kyrgyz nomads in the eastern Wakhan held the sun’s fire like old amber. Boulders the size of houses shone like colossal mirrors on the barren mountain slopes: Their surfaces had been buffed smooth as glass by long-vanished walls of ice.

Ice ages come in cycles. The next one will shove the rubble of our cities down to lower latitudes. The ice ages will wipe out all evidence of Ali’s frail woodlot and easily smear away the deep tank tracks the Soviets left in the Wakhan pastures almost 40 years ago. The ruts look brand-new. And eventually another Wakhi will appear to thresh, to prod his oxen over cut wheat—3,600 rotations, by my calculation, for each disk of bread. It’s all a circle.

My walk is a circle, albeit one with the radius of the world.

On the morning of September 23, in a coarse ice mist, we set out with two pack donkeys to climb Irshad Pass, a high and desolate gateway close to where the Hindu Kush meets the Karakoram Range, dividing Afghanistan from Pakistan.

Climbing a mountain under such conditions is a strange and disorienting experience. It was like scaling a frozen and crazily tilted sea. Windblown ridges rippled the surface of the snow. We punched toeholds into the diamond waves with our ridiculous summer shoes. We tottered along ice-rimed cliffs. Snow hid fatal crevices. Sometimes the donkeys fell through the crust and refused to get up. We reached under their steaming bellies and lifted the animals to their feet. This exhausting ritual happened again and again. We were often lost.

By midday a blizzard was in full gust.

Paley was shouting into the satellite phone. We couldn’t see a hundred steps ahead, much less the peaks far above. Paley’s brother in Paris googled and read out to us the GPS coordinates for Irshad.

Irshad Pass rises 16,335 feet above sea level. We finally reached it at sunset. Paley ventured a feeble victory dance. I gulped air so thin and metallic it cut my lungs like razor blades. Gales had scoured the summit to raw bedrock. Without shelter or firewood, it was a hazardous place to camp. But we had little choice. A bitter dark was rising fast from the deep valleys. We unpacked our donkeys with difficulty—the ropes were stiff as rebar—and pounded our tent stakes into iron-cold earth. My frozen pants never thawed, not even inside my sleeping bag. I staggered out into the howling night only once, to wrap the donkeys in fluttering tarps. The animals’ black eyes shone back accusingly in the white bore of my headlamp. I couldn’t look at them.

Plainclothes Pakistani security forces confronted us the next night while we camped at the eastern end of the Hindu Kush. We had notified the government of our plan to enter Pakistan via Irshad. We carried valid visas issued in advance. But the officers, armed with AK-47s, insisted we had trespassed into a restricted zone. They drove us to the frontier town of Gilgit. In detention there, I overheard Paley, curled on his cot, parroting in his emphatic Norman accent the lines from a film playing on his hidden mobile phone: “An eye for an eye only ends up making zee whole world blind.”

“Matthieu,” I whispered, “are you watching Gandhi in an intelligence agency safe house?”

The next afternoon plainclothes agents escorted us onto the first flight out of Pakistan. Later it all would be declared a mix-up. A confusion of paperwork. I would be allowed back into Pakistan within days to resume my disrupted global walk. But on the night we landed in exile in a steaming Arabian city—I still wore my filthy snow pants—I felt numb. Standing dazed in the noisy airport immigration queue, I stared at the backs of my sun-blackened hands. And I recalled dusk atop Irshad Pass.

A pale disk of sun had slipped beneath a chink in the storm clouds. For perhaps two minutes everything gleamed with electrum light. Silver-gold shafts sprayed the Karakoram, igniting the tops of the snow pyramids that stretched in serried ranks to the edges of the world. It was the sort of light that burned away the loss in my heart. It was light through which I could imagine walking, with all my people, into the promise of new country.

Paul Salopek won two Pulitzer Prizes for his journalism while a foreign correspondent with the Chicago Tribune. Follow his global storytelling trek online at OutofEdenWalk.org and on Twitter (@PaulSalopek). Photographs of the Wakhan corridor by Matthieu Paley, who’s been exploring the region since 1999, last appeared in the February 2013 issue.