The big cats, leaving their reserved areas in Patagonia in search of food, are mauling sheep herds. Could tourism solve the problem?

Read Caption
Pincushion shrubs and shards of rock don’t trouble the puma known as Sarmiento, at center, or her 11-month-old cubs, huddled up at the end of a winter’s day above Lake Sarmiento, near Chile’s Torres del Paine National Park. The matriarch, who has raised several generations of cubs, spends most of her time hunting— and napping—along this waterfront.

The big cats, leaving their reserved areas in Patagonia in search of food, are mauling sheep herds. Could tourism solve the problem?

This story appears in the December 2018 issue of National Geographic magazine.

The first mountain lion I set eyes on was a heavily muscled creature, snarling with fear, 20 feet up a pine tree in central Utah. Treed by hounds, the animal was shot by a federal employee protecting a rancher’s sheep. If that encounter was pure Sam Peckinpah, my next sighting of the elusive cats—in Chile, where they’re known as pumas—would be straight out of a storybook.

Wedged between shrubs on a wind-blasted slope just outside southern Chile’s Torres del Paine National Park, I watch three tawny cubs tumble and race along the shore of an aquamarine lake, testing their strength, their teeth, their social status. Now and then their mother, known as Sarmiento, stops to assess the situation: Her green eyes, circumscribed with black eyeliner, are calm, her thick tail low. When the quartet reaches a peninsula studded with stromatolites, a puma timer apparently goes off: The mother and cubs curl up inside one of the doughnut-shaped rocks and do what cats do best. They nap.

Found all the way from southern Alaska to southern Chile, Puma concolor has the largest range of any land-dwelling mammal in the Western Hemisphere. Scientists suspect that there are higher concentrations of pumas around Torres del Paine than anywhere else. That’s mostly because pumas have plenty of prey (guanacos, hares), are protected in the park, and lack competition from other mammalian predators, such as wolves.

For anyone bent on seeing this apex predator in the wild, Torres del Paine—more than half a million acres of granite peaks, grasslands, subarctic forests, and wind-whipped lakes—is the place to be. The landscape is wide open, and many of the pumas have become habituated to humans as tourism has exploded. Like Sarmiento’s cubs along the lakeshore, pumas stroll about, hunt, groom, mate, and play with apparent disregard for the grinning visitors who come upon them.

Itching for more puma action, my guide, Jorge Cardenas, and I track the predators over several days, our ears alert for the high-pitched alarm calls of guanacos—a giveaway that pumas are on the hunt. We see no puma kills, but later, at a gathering organized by the conservation group Panthera, I get a sharp sense of the havoc the region’s expanding puma population can wreak. The meeting, held in a hotel in the hamlet of Cerro Castillo, is attended by government officials, biologists, tour guides, and ranchers.

Arturo Kroeger Vidal—a second-generation sheep rancher who operates a large estancia southeast of Torres del Paine—has taken a rare day off to voice his concerns. “Earlier in the month I sold 400 sheep,” he says calmly. “Five days after the sale, I had only 370 for the buyer. A puma took 30 in one night.” Fellow ranchers nod sympathetically. 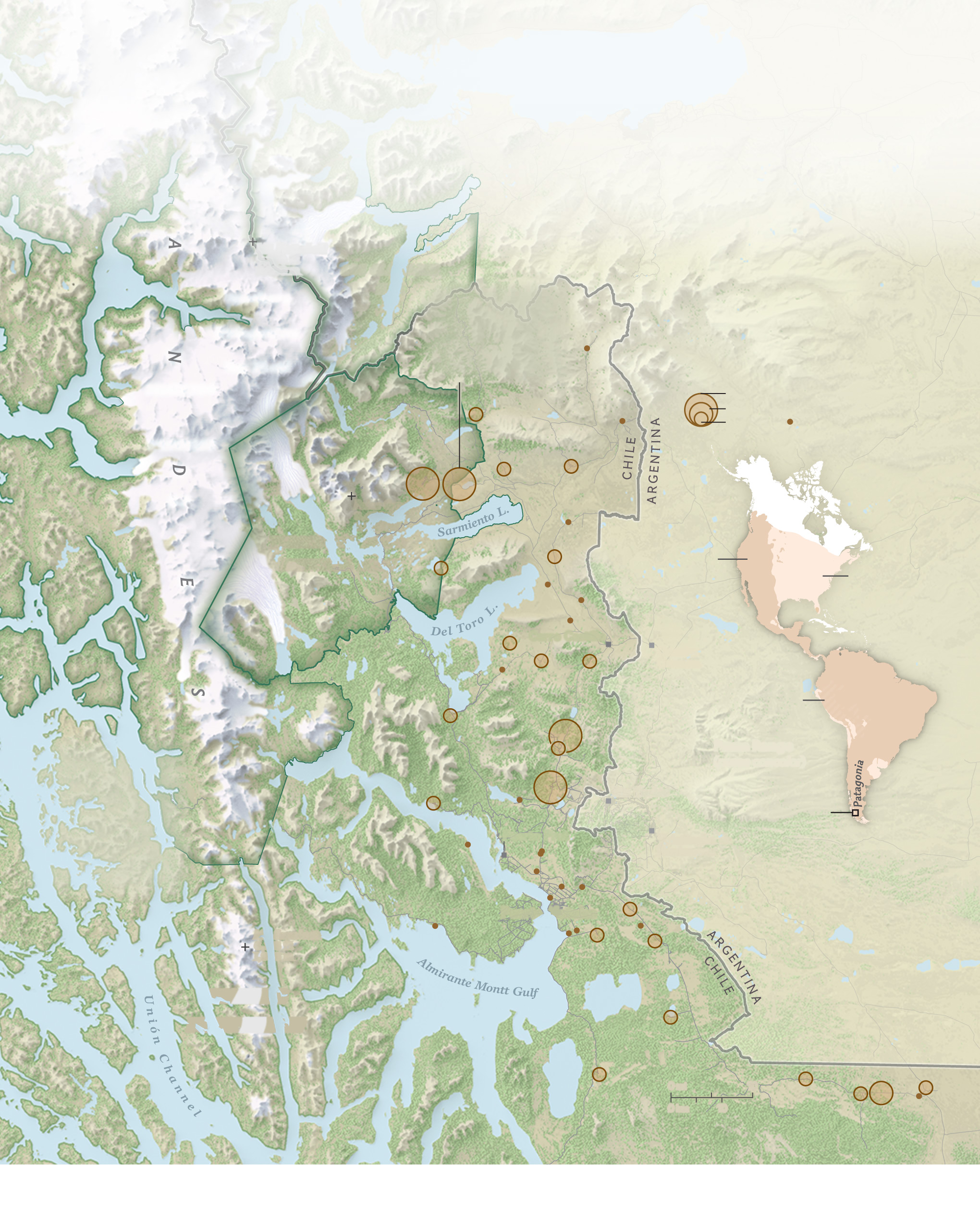 The puma population in Chile’s Torres del Paine National Park is booming, but the

protected cats are straying beyond park borders to prey on livestock. Their travels

seem to be haphazard: In a survey of Chilean ranchers near the park, most had seen

pumas on their land, but others hadn’t seen any.

root at ranches such

in hopes of spotting

a puma in the wild.

lands west of the park

grounds: There are no

ranches and the area

is beyond the range

of the pumas’ natural

pumas to the east.

lands west of the park

grounds: There are no

ranches and the area

is beyond the range

of the pumas’ natural

pumas to the east.

*PUMA SIGHTINGS DATA BASED ON INTERVIEWS CONDUCTED BY PANTHERA with 45 Chilean ranchers.

The puma population in Chile’s Torres

the protected cats are straying beyond

park borders to prey on livestock. Their

travels seem to be haphazard: In a survey

of Chilean ranchers near the park, most

had seen pumas on their land, but others

The rocky, protected lands west of the park

are poor hunting grounds: There are no

ranches and the area is beyond the range

pumas to the southeast.

The rocky, protected lands northwest of the

park are poor hunting grounds: There are no

ranches and the area is beyond the range

pumas to the southeast.

Ecotourism is taking root at ranches such

as Refugio Laguna Amarga, where visitors

may take guided tours in hopes of spotting

a puma in the wild.

DUCTED BY PANTHERA with 45 Chilean ranchers.

For well over a century, men like Kroeger—riding horses, carrying guns, and aided by hounds—controlled the region’s puma population. But when the Chilean government established Torres del Paine in the 1970s, hunting of pumas and guanacos was banned. Their numbers rose significantly, and both predator and prey, in search of sustenance, began migrating out of the park onto private ranchland.

“The creation of the park was terrible for ranchers,” Kroeger says, because some pumas leaving the park began attacking sheep. Since the park’s inception, ranchers estimate pumas have devoured some 30,000 sheep, representing substantial lost income from wool and meat sales.

Guides and some veteran park guards put the numbers of pumas in the park at 50 to a hundred. Outside the park, where pumas have yet to be accurately censused, ranchers collectively claim to kill a hundred of the cats a year. “Ranching is our economy,” Victor Manuel Sharp says at the hotel meeting. “What are we going to do?”

One option is to forgo sheep for cattle, which are too big for pumas to bother with. But sheepherding is a tradition here, and not everyone has good forage for bovines. Or you can use dogs to protect sheep, says rancher and dog breeder Jose Antonio Kusanovic, who hunted pumas before he got into the dog-training business. But a guard dog costs about $1,500, aside from food and veterinary care, and you’d need several to watch flocks of 2,000 or 3,000 sheep. It’s far cheaper, ranchers say, simply to hire a leonero—a lion hunter.

Charles Munn, an American who runs ecotourism companies, stands to speak. “I made an industry out of jaguar tourism in the Brazilian Pantanal. Pumas can bring you a lot of money.”

The ranchers grumble. They know they can’t charge tourists to track pumas on their land while continuing to kill them. (Chile’s government allows ranchers to kill a puma if they can prove it has taken a sheep, but most ranchers don’t even try to get a permit.)

“You’re saying we need to feed the puma so you have more pumas for tourism,” another rancher says sharply. “I’m too old to become touristic.”

Munn singles out the Goic brothers, Tomislav and Juan, sitting in the back of the room. Through the years their 5,500 sheep, which grazed along the park’s eastern border, dwindled to about a hundred—victims of a wicked snowstorm and constant puma predation. Now some 800 puma tourists a year pay the Goics a hefty fee to drive and hike around their 24-square-mile property with a guide and tracker, equipped with powerful binoculars and walkie-talkies.

On the Goic ranch, guests are almost guaranteed to see Sarmiento and her cubs, the lanky Arlo, or the laid-back Hermanita, who likes to hang out near the fence that divides Goic land from Torres proper. The Goics opened their ranch for puma tracking in 2015, when the park began enforcing rules that kept tourists and guides on trails, limiting their chance of seeing pumas. “We were worried about people’s security,” park superintendent Michael Arcos explains. Under pressure from clients to produce a puma, independent guides would stalk their prey at night, using lights, and they crept too close to animals. Only one fatal puma encounter has occurred in Torres del Paine, Chile’s most visited park, and they want to keep it that way.

The park’s cautious approach to tourism will stay in effect until scientists can establish how many pumas live there, how far they roam, their eating habits, and their social behaviors. The research—in and out of the park—will take years and will involve thermal camera surveys, GPS-collared pumas, guard dogs on especially vulnerable ranches, and scat-sniffing dogs (DNA from poop can reveal how many pumas live in an area).

The resulting information will shape conservation plans and, it’s hoped, make puma tourism safer for cats and people alike. Tourism fees could even help compensate ranchers for sheep killed by pumas. The idea is to make these keystone predators, which keep prey populations in check, as valuable to the region’s economy as they are to its environmental integrity.

Pumas here most likely eat more guanacos than sheep. That’s of little solace to ranchers such as Jorge Portales, who tells those at the hotel that he lost 24 percent of his sheep—600 animals—to pumas in one season. He switched to cattle, then reintroduced sheep along with guard dogs, but the pumas kept coming. “This is the cost of living near Torres del Paine,” he says with a sigh. “Now we don’t have any more sheep.” Today he runs his estancia as a guest-oriented operation, offering scenic horseback rides and outdoor lamb roasts. Puma tourism, he says, is next.

His fellow ranchers make no comment. Defiant and proud, they’ll hold out as long as they can.

Elizabeth Royte wrote in the June issue about the potential for marine microplastics to harm humans. This is award-winning wildlife photographer Ingo Arndt’s first story for the magazine.