Considered messengers of the gods, the macaques are now made to wear costumes, do backflips, and walk on stilts to please crowds.

Read Caption
Trainers with the Sen-zu No Sarumawashi performance group in Kawasaki take their diapered charges on daily walks in the streets. In the earliest stage of sarumawashi (monkey performance) training, baby monkeys are taught to sit on tiny stools. Gradually they learn to walk on stilts and vault over hurdles.

Considered messengers of the gods, the macaques are now made to wear costumes, do backflips, and walk on stilts to please crowds.

This story appears in the March 2020 issue of National Geographic magazine.

Six Japanese macaques standing erect on leashes obediently kicked the ball up and down the turf as their human trainers and a crowd of spectators cheered them on in a mock Japan-versus-Brazil match.

The monkeys in blue jerseys (Japan) looked sturdier, with fat tails sticking through the holes cut in their pants, but Brazil’s yellow lineup was quick—especially when player 10 stopped licking its hands. Suddenly, 10 got the ball, kicked, and scored. Victory! Japan’s team bowed. And the crowd exploded in laughter.

This was just one of the warm-up acts to the main event in the indoor amphitheater at Japan’s Nikko Saru Gundan, a roadside attraction off Route 121 in Nikko City. Wandering around the courtyard, I saw a macaque in diapers and an orange leisure suit trounce a five-year-old visitor in a game of air hockey. Every time the puck came its way, the monkey smacked it back toward the challenger’s goal. Another monkey doled out fortunes. On the main outdoor stage, a male macaque in a kimono struck macho poses and leaped over high hurdles.

Soon it was time to line up at the amphitheater, where a woman named Yuria Suzuki and her faithful primate, Riku, were headlining a parody of a popular Japanese police show and a circus act. When Sergeant Suzuki pretended to dispatch Captain Riku to a reported crime scene, he ducked behind the curtain and returned with a butcher knife—a rubber prop—in his head. In the circus finale, Riku, in blue polka-dot pants and a pink satin vest, vaulted across a chasm between staircases and executed a one-armed handstand on a tall, swaying pole. 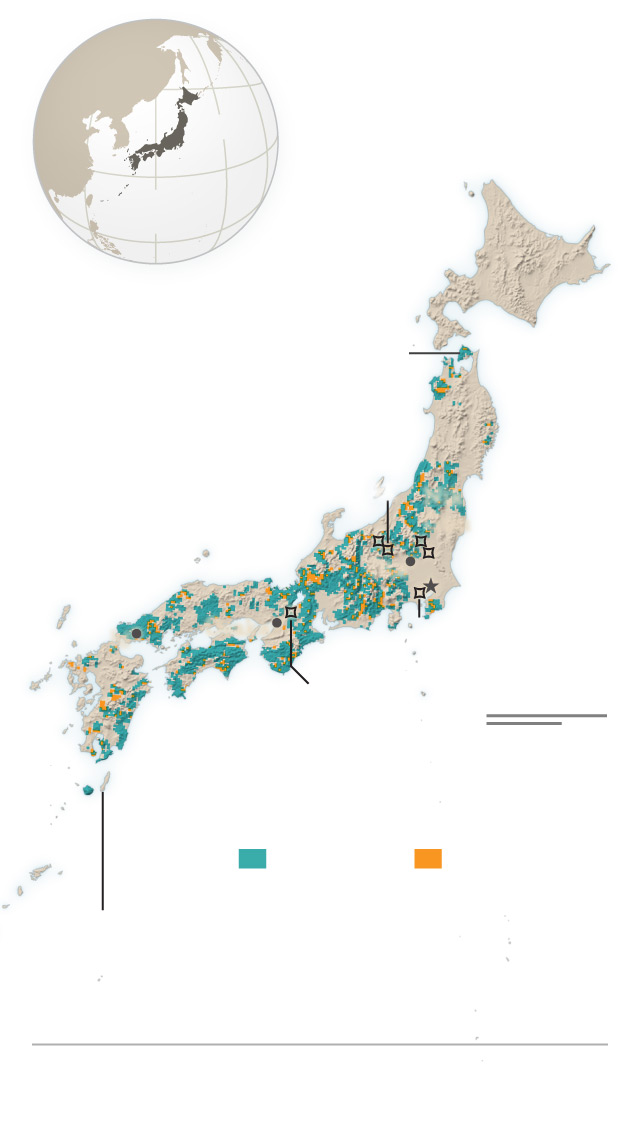 live as far north as the

A subspecies of macaque once

found on the island of Tanega Shima

RESEARCH CENTER; MINISTRY OF THE ENVIRONMENT, 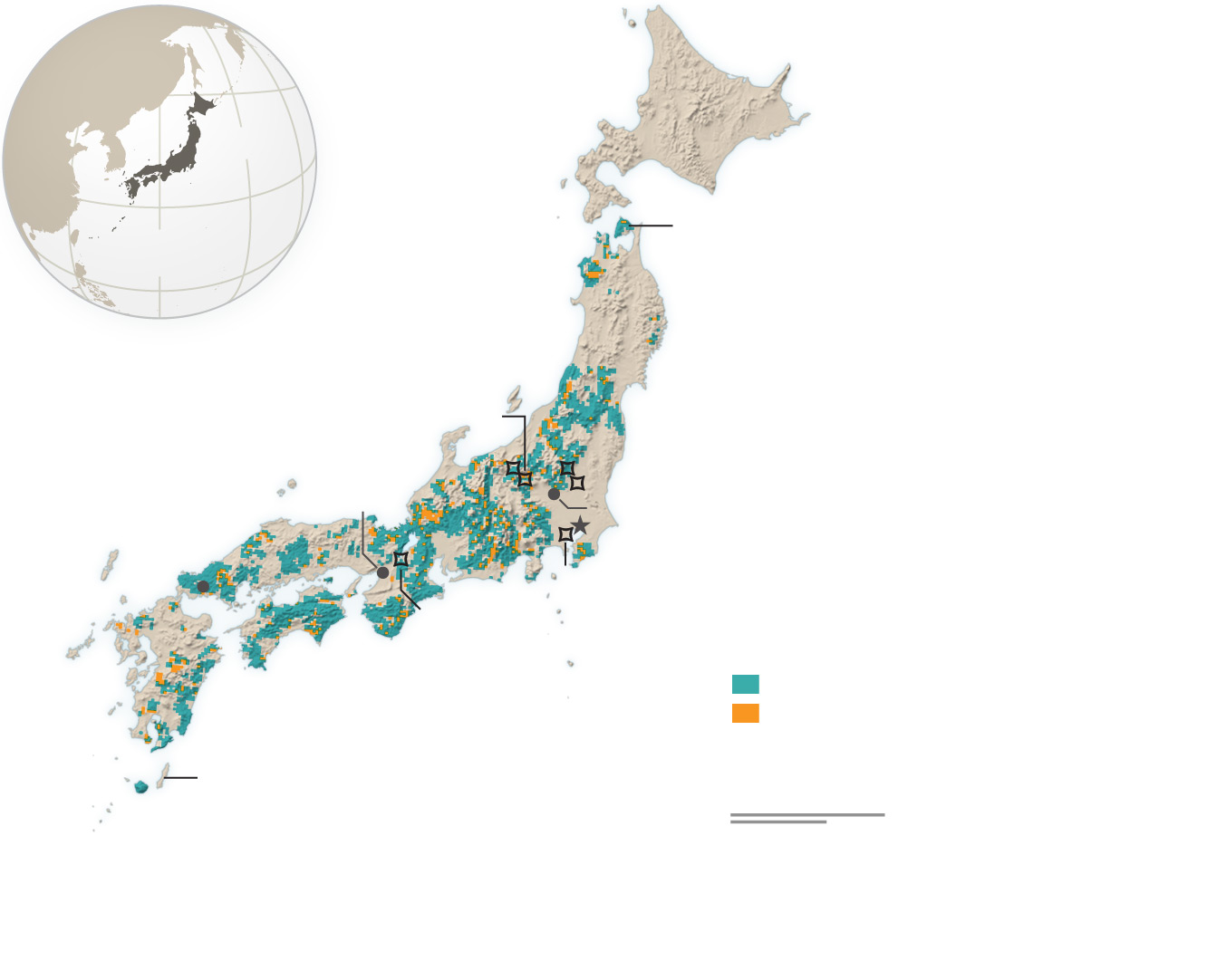 live as far north as the

A subspecies of macaque once

found on the island of Tanega Shima has been extinct since the 1950s.

MINISTRY OF THE ENVIRONMENT, GOVERNMENT OF JAPAN

The presentation at Nikko Saru Gundan has roots in traditional Japanese culture. The acts evolved from a form of entertainment known as sarumawashi, monkey performance, based on the belief that the saru (monkey) is the protector of horses and the mediator between gods and humans, capable of dispelling evil spirits and clearing the path for good fortune. Like Kabuki, sarumawashi was performed in public theaters as long as a thousand years ago.

But in a modernizing Japan, the spiritual significance has faded.

Today’s monkey performances resemble circus acts. Many animals are schooled using positive reinforcement and affection, but some are harshly disciplined and physically abused by their trainers, said Keiko Yamazaki, executive director of the Animal Literacy Research Institute and a board member of the Japanese Coalition for Animal Welfare. Yet diapered monkeys waddling across stages in Japan have not gotten the same attention as, say, bears that ride motorbikes in high-wire acts in China. Captive monkeys are protected under Japan’s animal welfare law, but the legislation emphasizes the treatment of common domestic pets.

“A lot of the welfare groups lobby for the kittens and the puppies—they want no-kill shelters. The cat ladies get a bigger following,” Yamazaki said. “Our goal is to make Japan’s animal welfare law applicable to all animals—farm animals, zoo animals, lab animals.”

Japan has a long history of using animals for entertainment, but sensitivities toward a cultural tradition shouldn’t prevent performing monkeys from being protected from abuse, she said. “It’s like the circus. When you go back in history, you see animals have been trained using extremely abusive methods, and the monkey business is no exception. But culture evolves—it’s not set in stone.”

The 21st-century versions of sarumawashi range from monkeys turning backflips in frilly dresses at street festivals to Nikko Saru Gundan’s primate pupils pretending to do math calculations and playing the piano in videos posted to YouTube. On a nine-day tour of sarumawashi culture, I saw a range of productions and visited a bar in Utsunomiya, nearly two hours north of Tokyo, where monkeys serve cold beers and warm hand towels and wear papier-mâché masks, including one that resembled U.S. president Donald Trump.

In nature, Japanese macaques, also known as snow monkeys, are hardy creatures. No other nonhuman primate lives at such northern latitudes. At Jigokudani Monkey Park, roughly 2,800 feet above sea level and a three-and-a-half-hour drive northwest of Tokyo, all those familiar images in magazines and nature documentaries of frosted snow monkeys lounging in hot springs come to life before throngs of tourists snapping wildlife photos and selfies.

Despite their nickname, Japanese macaques are found throughout most of the country, including subtropical forests in the southern part of their range. They’re true omnivores, eating everything from plants and fruits to insects, bark, and dirt. That varied diet has put them in some farmers’ crosshairs.

Every year, engai, monkey damage, costs millions of dollars in lost crops—mostly fruits and vegetables. Growers use fencing, scarecrows, and pyrotechnics to deter monkeys. In some municipalities, farmers can file complaints with agencies that manage programs to trap and kill nuisance animals. As a result, more than 19,000 monkeys are killed in Japan annually, according to the Ministry of the Environment. A byproduct of those eradication programs can be orphaned young monkeys, sometimes collected by concerned citizens and passed along to entertainment groups.

One afternoon near Yamaguchi, on a sloping hillside where a man was tending his koi pond, I took a short walk on a country path with Shuji Murasaki, 72. He stopped and motioned toward a large empty metal cage about the size of four school buses, in a field. It was a trap designed to lure crop-raiding monkeys with food.

The village had captured about 10 monkeys the previous week, Murasaki said. He didn’t know what happened to them—they probably were shot, though he wished they’d been sent to a zoo. Two tiny rescued monkeys found a home with his son, Kohei, who would train them to be performers, he said.

Murasaki, a human rights activist and former actor, was among a small group of people who revived traditional sarumawashi when it had virtually disappeared in the 1960s. Now he’s retired and has passed his practice of staying true to sarumawashi’s spiritual roots to Kohei. The performances they offer embrace the original Eastern ideas, Murasaki explained. “The animals are mediators between the audience and God—it’s not just a monkey show, it’s a ceremony.”

In Japanese beliefs, every animal has a route to provide good fortune, he continued, and in the traditional sarumawashi act, each monkey trick has meaning. When the trainer spins the animal by the arms, the performance area is purified. When a monkey leaps through two hoops, it is spreading health and long life. Having monkeys walk on stilts extends wishes to children for wellness and happiness.

It’s not easy training the animals to do such complicated stunts, Murasaki said. Even basic sarumawashi tricks can take more than a year to learn. The first step is teaching the monkey to sit on a small stool, he said. The trainer presents the stool and taps for the monkey to take a seat. If the monkey obliges, the trainer showers it with praise and affection. Next comes bipedal walking. “Very unnatural for monkeys,” Murasaki emphasized, which is why it can take months of leading the monkey by its hands until the animal starts doing this on command.

Gradually, trainer and monkey work toward more elaborate moves and gymnastics. Tiny stilts are mastered, then replaced with taller ones. Murasaki and his son allow the monkeys to take the lead, he said, because the alternative—screaming or hitting—would discourage trust.

Training methods vary, however. On my visit to Nikko Saru Gundan, Tsuyoshi Oikawa, a trainer there for 20 years, told me that traditionally animal handlers used dominance to teach the monkeys that humans outranked them. To establish a pecking order, they’d yell and sometimes even bite the monkeys. He said he uses positive reinforcement through play combined with oral discipline. “We treat them like our kids. If they do good performances, we say well done. But if they don’t, we scold them.”

Around the world, attractions such as Nikko Saru Gundan face an increasing backlash from those morally opposed to keeping wild animals in captivity and exploiting them for entertainment. “The world is outraged by gimmicky animal acts, which is why so many animal circuses are closing their doors and countries are banning them,” said Jason Baker, senior vice president of international campaigns with People for the Ethical Treatment of Animals. “Sadly, history has shown us that we can’t rely on governments to protect animals, especially in countries like Japan, where animal welfare laws are weak. No one monitors living conditions, preproduction training sessions, maternal separation, or what happens to animals when they’re no longer used by the entertainment industry.”

But Oikawa said that people critical of the attraction’s animal ethics don’t understand Japan’s sarumawashi culture. “We love monkeys—we’re on their side,” he said. “We don’t use abusive training methods.”

Satoshi Harada was a trainer who used to work in monkey shows before becoming director and head animal coach of a monkey act company called Sen-zu No Sarumawashi, which stages shows at street festivals, schools, and parties. When I met him at the company’s office in Kawasaki, he said he wanted to avoid stressful training methods by focusing more on positive reinforcement and affection, including even sleeping with the animals when they’re very young.

We stepped into his troupe’s practice room, where Harada introduced me to his colleagues and their furry collaborators dressed in diapers, including four new babies. He explained that the group keeps a rigorous training schedule—two hours in the morning and two hours in the afternoon, except on days when the monkeys are performing.

Earlier that morning, I’d marveled at the animals’ acrobatics during a show for 300 toddlers who were sitting with their legs crisscross in a preschool gymnasium. The star of the show was Ponzo, wearing a bright yellow vest and a black jumpsuit. The children squealed with delight as the monkey nailed his tricks, striding across the auditorium on stilts that towered above Harada and even catapulting over a boy who had volunteered to sit in a chair. “Ankoru! Ankoru!” the children yelled. “Encore! Encore!”

Now back at the Sen-zu office, the trainers stripped off the monkeys’ diapers and shut them into red metal cages, where they live when not performing. Then the trainers set about their end-of-day routines: scrubbing foul-smelling feces off the metal drip trays beneath the cages and preparing bowls of oranges, apples, and bananas for the monkeys’ dinner. They placed the bowls in a row on the floor and in unison presented the food to their performers. It was five o’clock, time to go home. They’d be back before breakfast to prepare for the next show.

Rene Ebersole writes about animals and wildlife crime for National Geographic. Jasper Doest won the 2019 Wildlife Photographer of the Year Photojournalist story award for this project.