A new species of flying squirrel has been found in the Pacific Northwest. It’s been dubbed Humboldt’s flying squirrel, in honor of the great naturalist Alexander von Humboldt.

The discovery means that three—not two—species of the furred gliders live in North America, and it changes our understanding of how these squirrels evolved and spread across the continent, scientists report today in the Journal of Mammalogy.

Researchers will want to take a closer look at the role these gliders play in their ecosystem. And they’ll want to assess how well they’re doing, especially because they’re found in areas with threatened spotted owls, which often dine on flying squirrels—most likely this new species.

Last year the United States Fish and Wildlife Service rejected granting endangered species status to a population of the squirrels in southern California, and it’s not yet clear if the new species designation will affect that decision.

“I’ve been scratching my head over these squirrels since 1992,” says Brian Arbogast, a mammalogist at the University of North Carolina in Wilmington, and the study’s lead author. “There was just something weird about those from the West Coast.”

(Glaucomys oregonensis) is found in forested

habitats along the Pacific coast of North

America, from southern British Columbia to

southern California. Its range overlaps that of 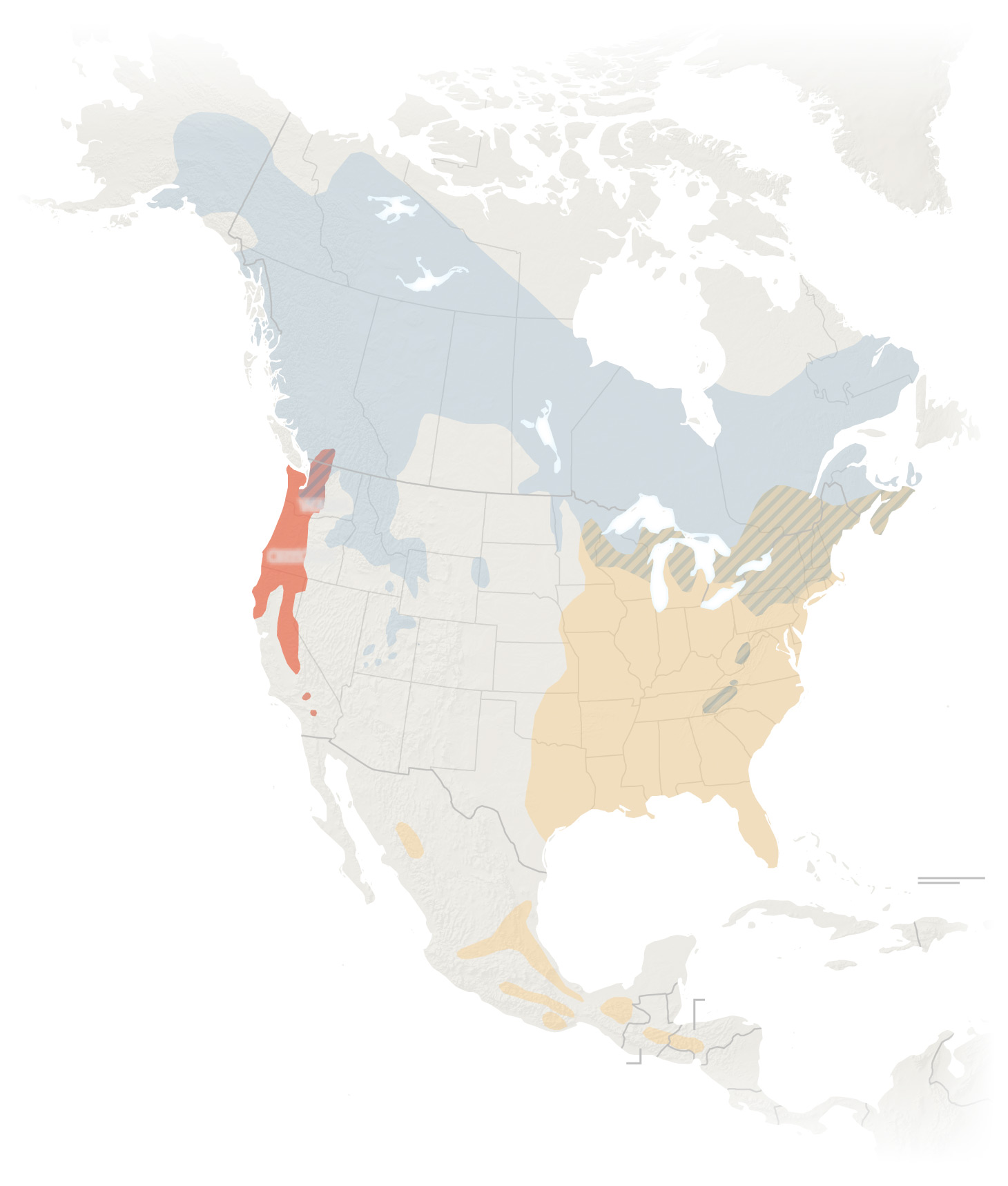 squirrel (Glaucomys oregonensis) is found in

forested habitats along the Pacific coast of

to southern California. Its range overlaps that of

Actually, all flying squirrels are a little bit weird. For starters, they don’t fly but glide, using a parachute-like membrane on both sides of their body that stretches from wrist to ankle. When they leap at a target tree, they spread their body into a square (a design some BASE jumpers have copied) and cover as much 150 feet in a single glide with great accuracy.

They use their broad, fluffy tails for steering and braking, slowing down before hitting a target tree. To escape predators, they usually sail through the forest at night, foraging for berries, nuts, fungi, and birds’ eggs. During the day they sleep in old tree holes they line with lichens and moss. Tiny, nocturnal, and to our ears almost silent, they’re the secretive souls of our forests—animals of no commercial value, and perhaps for that reason treasured by those fortunate enough to spot them.

And while Arbogast and his colleagues have been some of those lucky folks, they didn’t discover the new squirrel while working in the wild but through a genetic study, combined with analysis of the gliders’ history and mapping of their shifting ranges as glaciers and forests expanded and contracted.

One of the two previously known North American species, the southern flying squirrel (Glaucomys volans), is found in small, isolated populations in Mexico and Central America, as well as throughout the eastern United States. It makes its home in deciduous hardwood forests.

The other, the northern flying squirrel (G. sabrinus), inhabits the boreal coniferous forests of the northeastern U.S., Canada, and Alaska. It’s also found in the higher elevations of the Appalachian Mountains, the Rocky Mountains, eastern Oregon, and eastern Washington state.

Often such differences aren’t enough to identify a new species. Indeed, as Arbogast notes, a key physical trait scientists use to distinguish northern and southern flying squirrels—the baculum, or penis bone (robust and spiky in the northern species, and longer in the southern species)—doesn’t prevent the two from mating and producing hybrids in southeastern Canada.

“It was a shock when that was reported,” he says of the hybrid north-south squirrels. Abrogast’s new study shows, in fact, that the two species are closely related—sister taxa, as scientists say.

Another shock came as the scientists analyzed the DNA from tissue and skeletal samples they snipped or scraped from western flying squirrel museum specimens. They also examined DNA from fresher samples provided by trappers, who often find gliders in traps set out for martens.

“We thought the western squirrels had been separated from the northern species by glacial cycles,” Arbogast says. After the ice, which covered much of North America, retreated, the squirrels would have come back together to mate—an event that would have triggered “gene flow” between the two groups and should have been apparent in the gliders’ DNA.

That’s basically what did happen to the northern and southern gliders. As the ice pushed south, the squirrels were pushed south and became geographically isolated from one another. Later, as the ice melted and the forests moved northward, both species rapidly advanced north too. The northern gliders also expanded to Alaska and the west coast of Canada, bringing them into contact with the western squirrels.

But despite that contact, the new study shows there wasn’t any gene flow between the northern and western flying gliders—even in places in British Columbia and Washington where they live side-by-side. “For whatever reason, they aren’t breeding together,” Arbogast says. “Perhaps because they can’t.”

Arbogast suspects that these Pacific coast gliders endured a different experience during the glacial period, perhaps becoming isolated in the southern regions of the Pacific coast. For whatever reason, their expansion to the north and east as the climate warmed was not as rapid or as extensive as that of the northern and southern species. And whereas they also inhabit a northern coniferous forest, in general their habitat is more humid, darker, and milder than the forests of the colder, continental interior.

The scientists’ analysis of the DNA from 185 individuals across North America confirmed Arbogast’s view of the West Coast squirrels. They were different and weird enough to be classified as a new species: G. oregonensis—Humboldt’s flying squirrel.

“They’re what we call a “cryptic species,” one that’s hidden in plain view because they look so much like another species—you’d never guess they were different,” he says.

Scientists now regularly use snippets of DNA to detect new species whose features aren’t readily apparent to our eyes.

But Arbogast’s discovery is more than that, says Peter Weigl, a vertebrate ecologist and emeritus professor at Wake Forest University, in Winston-Salem, North Carolina. “He has their genetics, but he’s also shown how their geography, climate, and vegetation changed over time. It’s the full story.”

Now the big challenge is “to figure out what the hell the northern and Humboldt’s squirrels are doing,” Weigl says. “What’s keeping them apart? Is it the ecology or their behaviors? Are they specialized in some ways so that they aren’t competing?”

Answering these questions is important to conserving each species. It might be, for instance, that one glider is more often found in thick stands of old growth forest, while the other does fine in both old growth and younger, more open woodlands. Equally important is Weigl’s last question, “How do you tell them apart?”

“That’s something we’re working on,” Arbogast says. He and his colleagues are taking a closer look at museum specimens and will also be catching the squirrels for study to see if they can identify some key distinguishing features.

“Right now the easiest way is through genetics or geography.” So if you have the good fortune one night to spot a palm-size, dark squirrel, as opposed to a slightly larger and grayer squirrel, gliding through the mossy woods of an Oregon coastal forest, you can boast, “I’ve seen it: Humboldt’s flying squirrel.” North America’s newest mammal.

Virginia Morell, a National Geographic contributor, is the author of the New York Times bestseller Animal Wise: How We Know Animals Think and Feel.