An Acropora colony on Christmas Island, Kiribati, before and after bleaching that struck the reef in 2015 and 2016.

The rainforests of the sea, coral reefs play vital roles in the health of the ocean. But as a new study makes clear, humans’ influence on Earth’s climate is pushing them to the brink.

The analysis, published on Thursday in Science, takes a fresh look at the health of 100 coral reefs from around the world, stitching together a record from 1980 to 2016 from government documents, scientific studies, and media reports.

This approach corrects for the biases found in other, more spottily maintained databases—and paints a grim picture. On average, the study finds that the amount of time between severe bleaching events, which gravely wound coral reefs, has shrunk by a factor of five.

In the 1980s, coral reefs could expect about 25 to 30 years of recovery time between stressful episodes. But now, abnormally warm waters come once every six years on average. That’s simply not enough time for corals to cope, scientists warn. Even the fastest-growing corals need at least 10 to 15 years to fully recover from severe bleaching. Entire reefs need decades to heal.

“It’s like getting hit by a serious disease every couple of years, or at such short intervals that you don’t have time to recover in between,” says study coauthor Julia Baum, a marine biologist at the University of Victoria.

THE SCOURGE OF BLEACHING

Corals bleach when stressors like unusually hot water short-circuit the symbiotic algae inside corals’ tissues, rendering them toxic. Corals then expel these colorful algae from their flesh, revealing the corals’ white skeletons. This short-term bid for survival poses grave risks. In exchange for corals’ protection, the algae help feed the corals. Without them, corals can starve to death—and often do.

Scientists describe these bleached, dying reefs as haunting. Fields of once-vibrant coral lay barren and white, only to be covered in death shrouds of opportunistic algae. Fish flee. The water falls eerily silent, robbed of the buzzes and crackles of healthy reef life.

“You get out of the water, and you realize you stink—you smell of death,” says study coauthor C. Mark Eakin, one of the U.S. National Oceanic and Atmospheric Administration’s chief coral scientists. “Corals are expelling their own tissue along with the algae…[so] you’ve just got all this rotting coral flesh.”

This carnage has dire implications. More than a quarter of all known marine species spend at least some of their lifecycle in coral reefs, says Eakin. In addition, more than 500 million people depend on coral reefs for food or fishing income. Even more still rely on corals to protect their shorelines from unchecked erosion and to fuel local tourism industries. 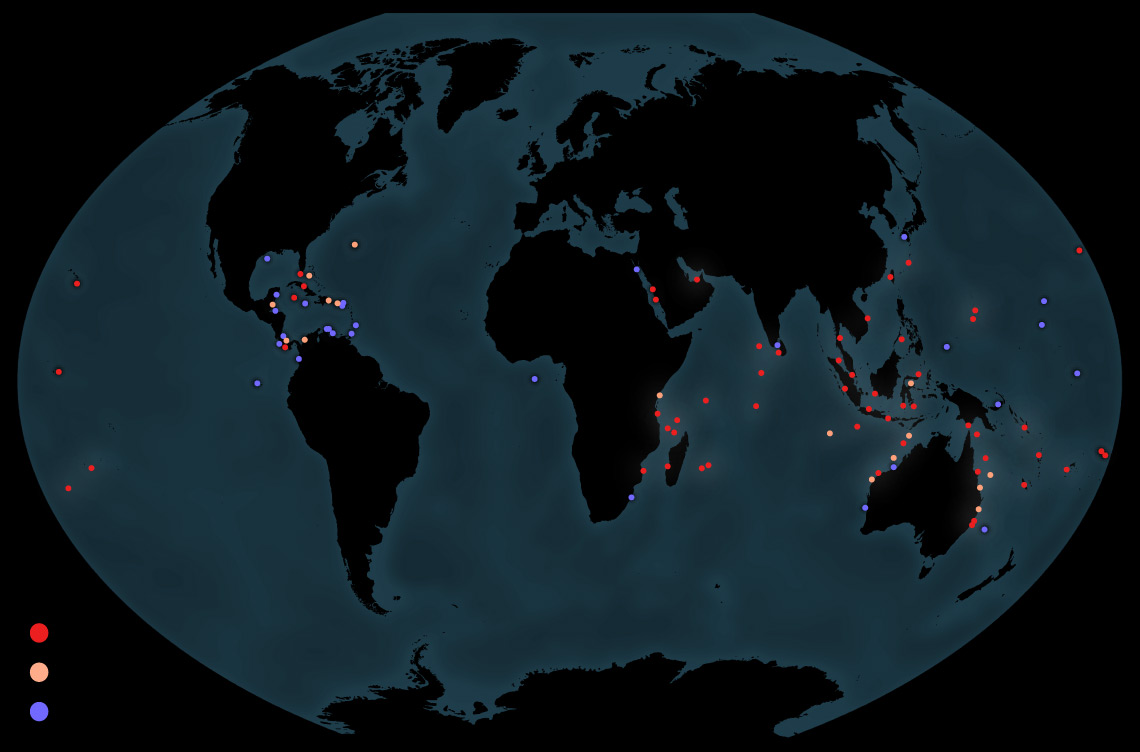 THE CONDITION OF CORAL 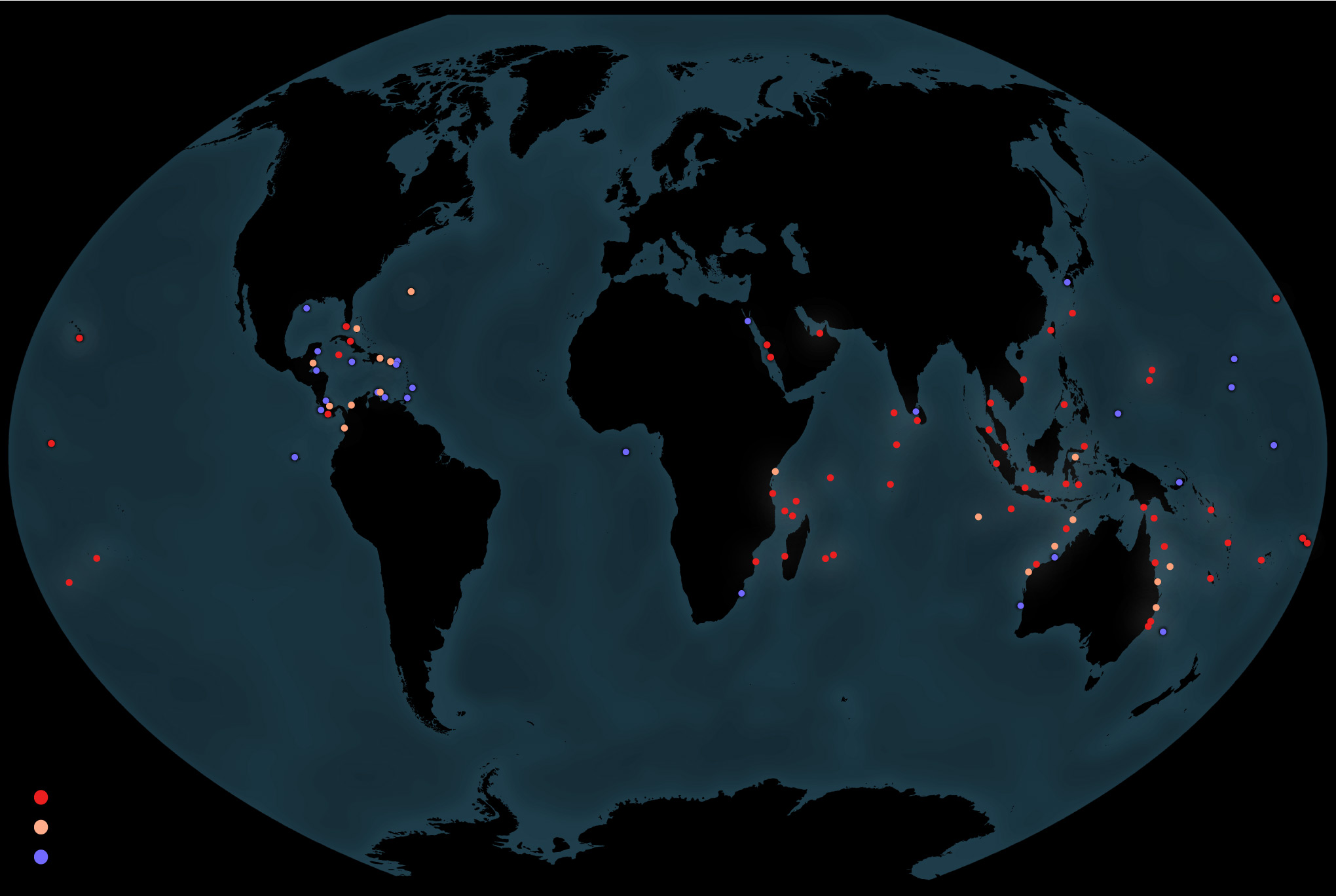 THE CONDITION OF CORAL

Among them is the Great Barrier Reef, the iconic 1,400-mile stretch of coral that snakes along Australia’s eastern shores. In 2016 and 2017, the reef bleached in back-to-back years for the first time in recorded history. The 2016 bleaching killed about two-thirds of the corals along one stretch of the northern Great Barrier Reef.

From July 2015 to April 2016, scientists watched in horror as abnormally warm waters pummeled Christmas Island for ten straight months. To Baum’s knowledge, that’s the longest stretch of heat stress ever observed on a single reef. In the months since, 90 percent of the reef’s corals have died.

“The whole thing just melted down,” says Baum, who has taken 14 expeditions to Christmas Island. “The deafening silence of the dead reef punched us in the gut.”

The 2016 mass bleaching, like the devastating bleaching of 1998, was made worse by El Niño, which pushed temperatures in the tropical Pacific above average. But as humans tweak Earth’s climate on a planetary scale, “average” temperatures can also be deadly. The warming that walloped the Great Barrier Reef in 2017 came without an El Niño.

Despite climate change’s influence, the new study doesn’t find a clear relationship between the number of severe bleaching events and the amount of long-term warming in Earth’s oceans. Baum says that this is because corals aren’t slow-cooked but rather flash-fried in short temperature spikes.

Other studies have suggested climate change makes these deadly spikes likelier. One recent study published by the American Meteorological Society found that human activity increased the odds of the 2016 spike that, on top of El Niño, bleached the Great Barrier Reef.

“It’s those temperature spikes that are going to drive corals to extinction in the next couple of decades if we don’t wake up now and start getting serious about saving these ecosystems,” Baum adds.

To curb damage to corals, the researchers say that humankind must swiftly reduce heat-trapping gases in the atmosphere and lessen local damages to coral reefs, such as overfishing.

Current actions aren’t enough, the scientists say. Australian coral-reef scientist Terry Hughes, the study’s lead author, has publicly lambasted his government for promoting coal, among the world’s most carbon-intensive forms of energy. Australia's federal and local governments support the Adani Carmichael coal mine, which would be one of the largest mines on Earth if built.

Eakin, a U.S. government scientist, adds that the United States could also be doing more.

“Certainly, the actions being taken by the Trump administration—the plan to pull out of the Paris Agreement as well as end the Clean Power Plan—are not the actions you would take if you were trying to protect coral reefs,” he says.

Researchers emphasize that there’s still time, perhaps a couple of decades, to prevent existential damage to the world’s reefs—but only if sweeping action is taken now.

“The very last thing I would want people to take from this is that there is no hope,” says Baum. “This should serve as a really serious wake-up call.”