Although poaching is down in Kruger National Park, the former hot spot, the overall crisis continues.

Rhinoceros poaching is still at crisis levels, according to the South African government, which today released statistics on rhino poaching and rhino horn smuggling in 2017. Some 1,028 rhinos were illegally killed last year, 26 fewer than in 2016 but far above the 13 killed in 2007.

“While this may look like progress on paper, it's overshadowed by the fact that rhino populations are still in critical danger,” said Jimmiel Mandima of the Nairobi-based African Wildlife Foundation. “A small drop in yearly poaching statistics doesn’t tip the scales against the imminent threat of extinction.” 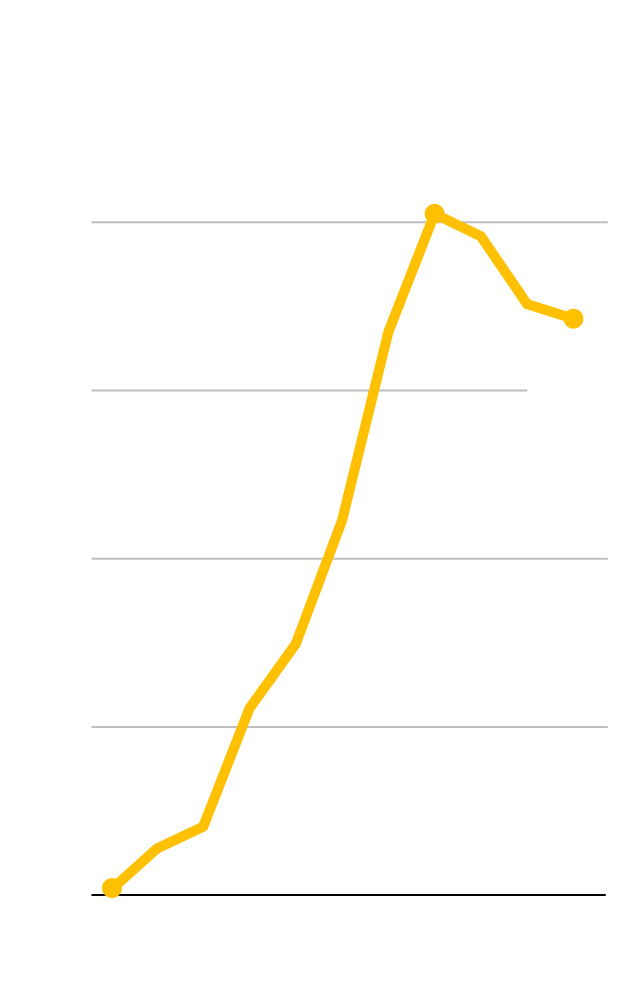 South Africa is home to about 80 percent of the world’s 29,000 rhinos. Though this is the third year in a row the number of rhinos poached in South Africa has dropped—from a high of 1,215 in 2014—conservationists say these losses are still unsustainable. The decline last year was small enough that it could be accounted for by undetected carcasses in large national parks, according to TRAFFIC, the wildlife trade monitoring organization.

Rhino horn is in demand in Asia, especially in Vietnam. Some erroneously believe it has medicinal value, capable of anything from curing cancer to working as an aphrodisiac. Others use it as a kind of club drug, to be mixed with water or alcohol. In reality, rhino horn is made of keratin, the same material as hair and fingernails, and there’s scant evidence that it has any effect, medicinal or otherwise. Rhino horn is also increasingly being carved into works of art.

“Clearly poachers will go for the easiest targets, and if South Africa's main crime fighting institutions are failing to coordinate their efforts to prevent poaching effectively, then the country's rhinos will inevitably be targeted,” Thomas says.

Cross-border trade in rhino horns has long been banned, and from 2009 to the middle of 2017, buying and selling it within South Africa was also prohibited. But following a court ruling in April on a lawsuit brought by rhino farmer John Hume, who owns about 1,500 rhinos, the domestic moratorium was lifted.

In August Hume held an auction for some of his stockpiled rhino horn, obtained by cutting off horn with a chainsaw, which is painless if done right. He and other proponents of legalizing the domestic trade argued it would combat poaching by incentivizing the protection and breeding of more rhinos. But because the international trade is prohibited, and the biggest demand for rhino horn is overseas, critics say that a legal trade in South Africa inevitably would result in those horns leaking onto the international black market and further stimulating demand.

Official numbers for how much horn Hume actually sold have not been released. “Rumors are it was very little indeed,” Thomas says. “That being the case, I don’t believe it will have had any measurable impact one way or another on the poaching statistics.”

One notable change is that the number of rhinos poached in Kruger National Park, previously a poaching hot spot, has decreased by 24 percent. It’s attributed to an anti-poaching strategy that combines more specialized training for rangers, improved radio communications, the use of trained dogs to track suspected poachers over longer distances, better coordination with law enforcement in bordering Mozambique.

In addition the use of new surveillance technology called “Meerkat” has been effective. The mobile system can differentiate between human and animal movements to alert rangers of possible incursions. Specialized long-range optics then can identify the exact location of the suspected poachers. This allows for early and rapid response by park rangers.

On the other hand, rhino poaching in KwaZulu-Natal, in the country’s northeast, has increased. By November 2017 the province was projected to have a 50 percent increase in rhino poaching incidents over the previous year.

Across South Africa, 502 alleged rhino poachers and 16 alleged traffickers were arrested in 2017, according to the government’s press release. Moving from arrests to prosecutions and convictions is an area of critical importance, the government noted.

Official 2017 numbers for rhino poaching incidents in other countries have not yet been released, but there appears to have been a drop in killings in both Zimbabwe and Namibia, Thomas says. Combined with the slight drop in South Africa, it’s likely the continent overall has made at least minor progress in reducing the number of rhinos poached.