National Geographic produced this content as part of our partnership with Rolex, formed to promote exploration and conservation. The organizations will join forces in efforts that support veteran explorers, nurture emerging explorers, and protect Earth’s wonders.

The year was 1981, and Angelique Songco, then an employee of a dive boat, found herself marveling at the atolls before her, the coral heart of the Philippines. But over the next few years, she saw humans’ shadow creep over the waters of the Sulu Sea.

Fishermen from as far away as the province of Quezon, some 370 miles distant, filed into Tubbataha Reef, one of the world’s most biodiverse—for their livelihoods’ sake. The results were devastating. Dynamite killed fish where they swam; cyanide squirted over corals stunned fish into submission. On the reef’s islets, fishermen gathered seabirds and their eggs.

“Without even understanding the ecological value of the marine environment, I was convinced that such beauty must be protected,” Songco told the World Wildlife Fund in 2015.

In 2001, Songco applied to be park manager of Tubbataha, designated a protected area in 1988. Ever since, she has devoted her life to protecting the reef. Her efforts have paid off: As reefs worldwide find themselves under siege, Tubbataha has remained shockingly pristine.

“The first thing that strikes you is that you are in an ocean wilderness,” say National Geographic photographers David Doubilet (who is also a Rolex Ambassador) and Jennifer Hayes, who visited the reef in May 2017. “You encounter the sea and marine life here on their terms, not yours.”

Here, among undersea coral walls that plunge more than 300 feet deep, nature’s chaos reigns. Schools of jack dart and dazzle; marble rays patrol the deep. Tiger sharks, usually thought of as lone predators, are even rumored to swim in groups at Tubbataha.

In all, some 600 species of fish and 360 coral species—about half of all known species—call Tubbataha home. The park’s islets also host the last seabird rookery in the Philippines, providing refuge to 100 species of birds.

“All of the signs are that Tubbataha Reef is nearing what we believe to be the true natural state,” says John McManus, a marine biologist at the Rosenstiel School at the University of Miami. “This is an amazing thing that’s happened.”

The peace that nature and humans have brokered at Tubbataha stands out within the Coral Triangle, a richly biodiverse corner of Southeast Asia, where overfishing and international shipping are increasingly common.

How has Tubbataha avoided the fate of overfished reefs nearby? In part, its isolation. Tubbataha sits near the center of the Sulu Sea, more than 90 miles away from the nearest inhabited islands. Neither of its two islets has fresh water.

Declarations made in Manila or Paris, though, mean little unless they hold weight in the middle of the Sulu Sea. That’s where Songco comes in. For the last 16 years, she has worked to build public support for the reef, commanding attention with a public persona McManus likens to a fairy godmother’s. 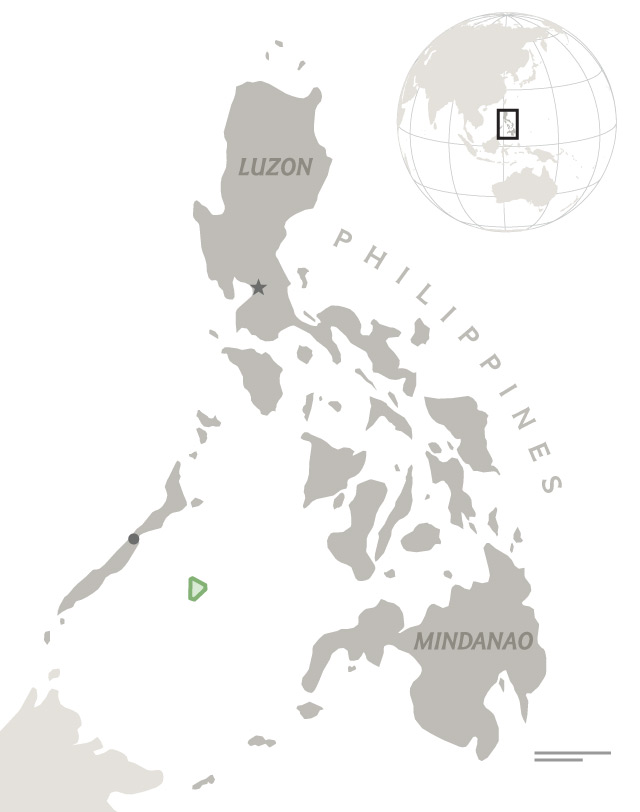 Songco also has the law on her side. The Philippines has prohibited fishing in Tubbataha, and in partnership with UNESCO, the country recently secured extra protections for the reef against shipping. What’s more, vigilant park rangers, some of them members of the Philippines’ military, have protected Tubbataha since 1995. They live two months at a time at Tubbataha in total isolation. Their only place of refuge: a spit of sand and concrete jutting from the water.

These extraordinary efforts safeguard Tubbataha’s extraordinary benefits. For one, it’s considered one of the world’s best dive sites, drawing in tourists worth many times more than fishing the reef would bring. Tourism also provides nearly half of the park’s funds, and revenue-sharing agreements help fund the local government.

Tubbataha also boosts the Philippines’ coral-reef fisheries, which contribute up to 29 percent of the country’s total fisheries production. According to Silliman University biologist Angel Alcala, ocean currents carry huge numbers of marine larvae from Tubbataha to the rest of the Sulu Sea. The influx helps to replenish fished waters and ensures the country’s food security.

Despite managers’ successes, challenges remain for Tubbataha. Rangers continue to find seabird nests built with washed-in plastic, and despite its decline, illegal fishing stubbornly persists. Since 2013, Tubbataha has recuperated from the grounding of a U.S. naval ship, which damaged more than 21,000 square feet of coral.

And as climate change continues, local vigilance can’t stop the Sulu Sea from getting warmer and more acidic. Altered waters will expose the reef’s corals to increasingly severe, and potentially deadly, bleaching conditions. From 2014 to 2017—the worst global bleaching event on record—Tubbataha faced two years of bleaching stress, after decades of relative calm.

The climate threats to Tubbataha stand to worsen. A recent UNESCO report forecasts that by 2040, the reef will face severe heat stress at least twice per decade. If we do not slow global carbon emissions, such stress could hit Tubbataha annually by 2040, potentially dealing it a death sentence.

For now, though, Tubbataha stands tall, a coral sentinel that its protectors will defend—and marvel over—to the last.

“I have very few words for the kind of tremendous beauty that you see [at Tubbataha],” says Fanny Douvere, the head of UNESCO’s World Heritage Centre Marine Programme. “A photo can never capture what you actually experience.”