In a tiny corner of one of Earth’s harshest, coldest regions, an unlikely force continues to shift and change the landscape: an active volcano.

Deception Island, made of the volcano’s caldera and located near the tip of the Antarctic peninsula, has erupted several times since humans first set foot in the South Shetlands around 1820. The active volcano is home to a wide variety of wildlife and has repeatedly spewed ash and hot lava into the frigid waters of the surrounding ocean. A violent eruption about 10,000 years ago caused the volcano’s summit to collapse and formed the flooded caldera in the center of the island.

Acacia Johnson, a photographer and naturalist who works as a guide for Quark Expeditions in Antarctica, says the island’s name comes from the very narrow, easy-to-miss opening into the caldera, known as Neptune's Bellows.

“The island appears solid from the outside, until that opening is found and it is discovered to be a flooded caldera,” she says. “It's an amazing passage to sail through, with walls of rock rising up on both sides. There is also a submerged rock right in the middle of the channel that has caused many a shipwreck.” 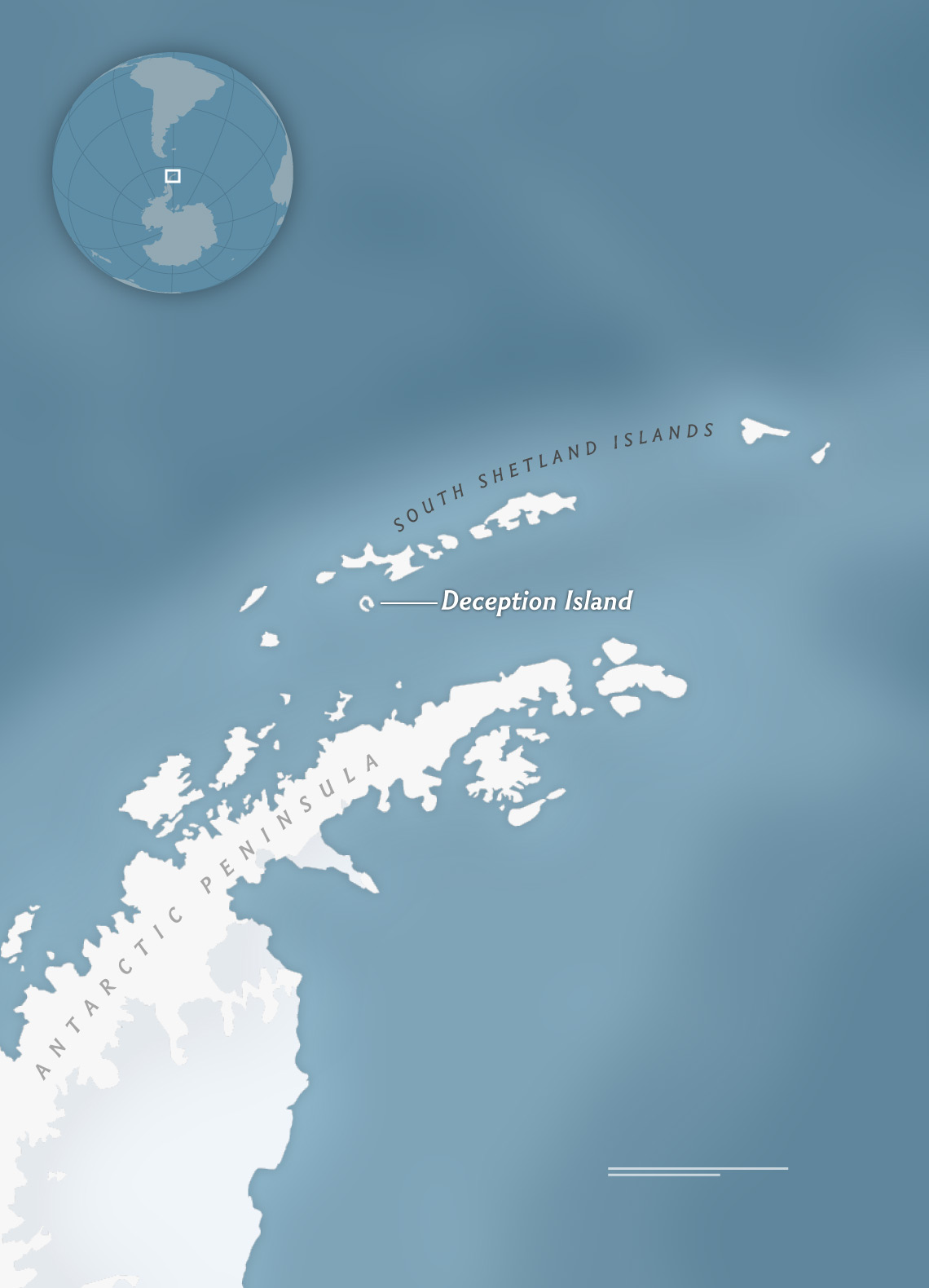 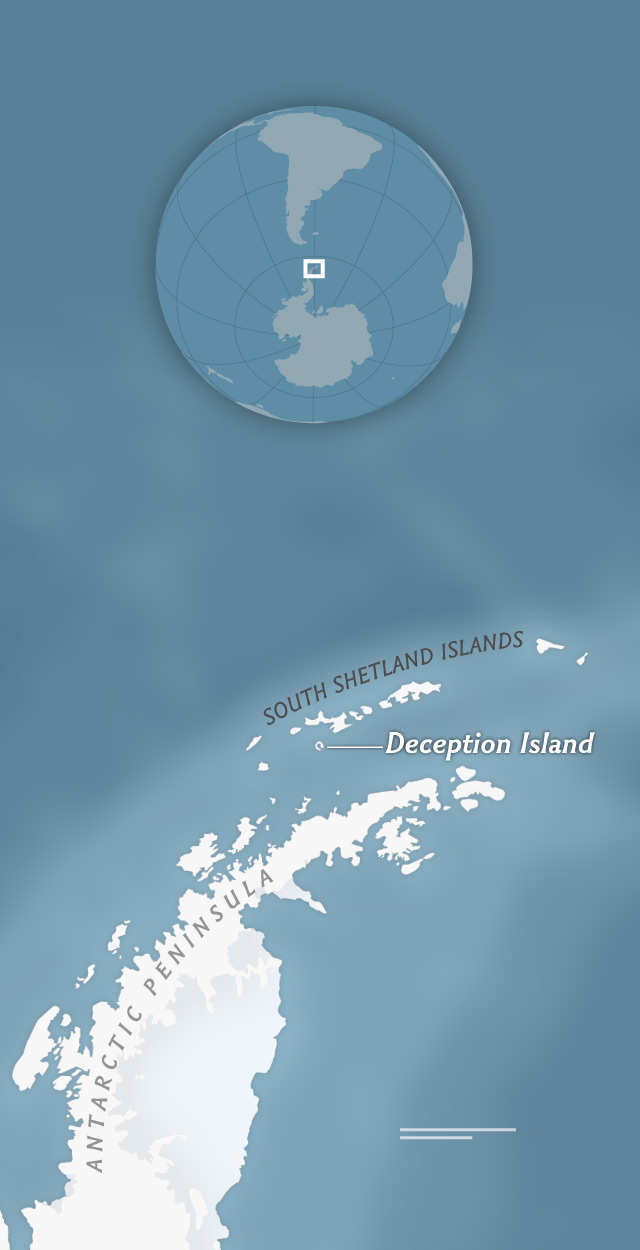 Since its discovery, the island has played host to brutal seal- and whale-hunting groups that used it as a base for their operations. With the rise of pelagic whaling, where fleets of ships with efficient tracking technology and on-board whale-processing equipment were sent on months-long voyages to Antarctica, the island wasn't needed as a base of whaling operations anymore—but some of the area’s whale species were hunted almost to extinction by the 1930s.

While life on the island can seem bleak and inhospitable, a diverse array of species still exists there. Because of the volcano’s activity, 18 species of moss and lichens that have not been recorded elsewhere in Antarctica live on the island. Eight seabirds also nest there, including the chinstrap penguin colony at Baily Head. The colony is comprised of over 100,000 breeding pairs of penguins—the largest group in the Antarctic Peninsula and possibly one of the largest in the world.

Several countries established research bases on the island in the 20th century, though scientific experiments were being conducted by the British as early as 1828. Chile, Norway, and Britain all had bases on the island, but volcanic eruptions and activity in the late 1960s destroyed the Chilean base at Pendulum Cove and led to the permanent closure of the British base.

Johnson was moved by the beauty of the island on her first trip to Antarctica, and she resolved on her very first voyage that she would return one day as a guide. A photographer who first fell in love with wild Arctic landscapes, she was captivated by the surreal, otherworldly nature of Antarctica.

“It's a photographer's dreamland,” she says. “There are old, decaying buildings and rusting structures that people love to photograph—a rare time when we can see, and understand, traces of human presence and industry in the Antarctic region.”

The island’s black-sand beach is geothermally heated, so at low tide, clouds of steam rise from the shore. Johnson says she’s actually been swimming there because the water along the shoreline is quite hot within the first six feet of the shore.

“The volcanic geology of the island, especially inside the caldera, is stunning,” she says. “There are some features that are very colorful, but by and large it's very monochromatic and high-contrast. The glaciers and mountains are patterned and streaked with ash in many places, creating patterns and subtleties of tone unlike anything I've ever seen. It just looks like it can't possibly be real.”

National Geographic has been photographing Deception Island for decades. A search of the photo archives turned up images taken as early as 1929, revealing whaling ships, explorers, and lots of penguins.

Today, Deception Island is often thought of as desolate and empty despite luring tourists to visit, but favorable weather gave Johnson the chance to see a different side of the island—and a different story about the wildlife there.

Johnson thought she knew what her favorite part of the island was—the landscape and geology. In early 2018, though, she had the opportunity to observe the chinstrap penguin colony at Baily Head, a spot on the outer edge of the caldera where the sea swells are usually so large that a boat landing is impossible.

“The density of wildlife at Baily Head is so staggering that it brings people to their knees,” she says. “Even some of my most experienced colleagues were in tears. The black beach is peppered with penguins as far as the eye can see, diving in and out of the water in the surf. The colony is up in the mountains, blanketing the hillsides in a natural amphitheater, and the penguins move back and forth to the ocean in this massive, condensed ‘superhighway’ of life.”

During her visit, Johnson climbed a hill to get a broad view of the amphitheater, the penguin superhighway, the glittering ocean, and the green vegetation growing on the hillside.

“As you watch, it's as if every corner of the landscape is subtly moving with life—yet inside the caldera, just on the other side of the mountains, you'd sworn you'd never seen such a desolate place,” she says. “Plus, the penguins had recently hatched their chicks, so the whole colony was brimming with new life.”

Visits to the island aren’t always that easy. Twice this season, Johnson says winds flowing down the slopes of the caldera appeared suddenly, gusting in excess of 46 miles an hour and forcing her group to cancel their plans and head back to the ship.

“The change happened in a matter of minutes and exemplified one of the reasons I love traveling in Antarctica,” she says. “Things are always changing, reminding us of how powerful the landscape actually is—reminding us of our place within it, how small and insignificant we really are.”