Jeff Bezos and his spaceflight firm Blue Origin have announced their lunar ambitions—joining the global race for this prime extraterrestrial real estate.

Jeff Bezos and his spaceflight firm Blue Origin have announced their lunar ambitions—joining the global race for this prime extraterrestrial real estate.

Blue Origin—the private spaceflight company owned by billionaire Jeff Bezos—announced today that it intends to send its new Blue Moon lander to the lunar south pole. During an invitation-only event in Washington, D.C., Bezos revealed that the company is targeting Shackleton crater, a 13-mile-wide splotch parked at the moon's south pole that is rich in water ice and surrounded by patches of near-perpetual sunlight. 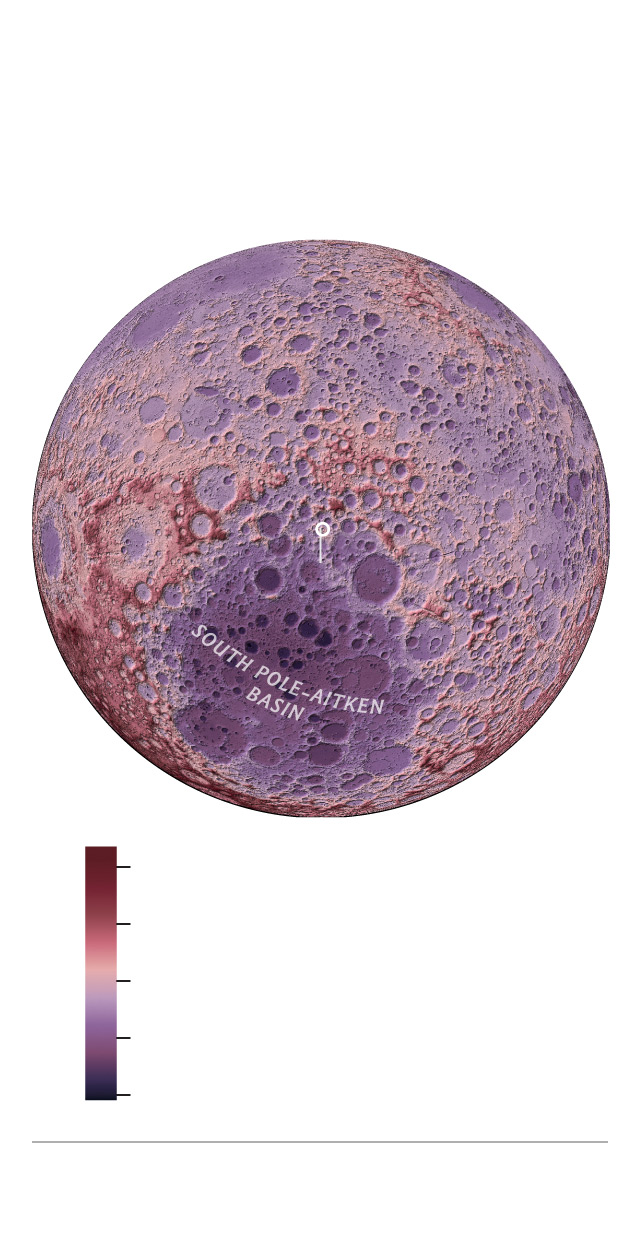 In the permanent shadows of the moon’s south polar craters, water ice is known to exist.

*With no sea level, zero is set where a hypothetical 1,079-mile radius sphere would intersect the surface.

Rumors of Blue Origin's lunar designs took off on April 26, when the company issued a cryptic tweet giving today's date, paired with an image of explorer Ernest Shackleton’s ship the Endurance, part of his troubled 1914 journey across Antarctica.

But the company had quietly been laying a groundwork for months. Since last fall, Blue Origin has advertised jobs in lunar lander design, filed a request to trademark the term “Blue Moon”, and announced that it is co-sponsoring a moon race along the lines of the former Google Lunar Xprize. The company even features the moon in its coat of arms.

“It’s time for America to return to the moon—this time to stay,” Bretton Alexander, Blue Origin’s director of business development and strategy, testified to Congress in 2017. “Shackleton crater, and other locations like it, offer a realistic proving ground for testing of critical deep space exploration technologies in close proximity to Earth.”

With this announcement, Blue Origin joins a fleet of space agencies and other private groups with their sights set on the lunar south pole. But why this region in particular, and what does the race mean for potential human missions? We’ve got you covered.

For starters, the south pole is marred by one of the largest known impact craters in the solar system. Called the South Pole-Aitken Basin, it’s a mammoth blemish that scientists would love to get a better look at.

Thought to be ancient, the basin spans 1,600 miles and is roughly eight miles deep. It contains numerous smaller (but still relatively large) craters, such as Apollo, Schrödinger, Shackleton, and Von Kármán, a crater on the lunar far side where China’s Chang’e-4 spacecraft set down in January.

“There’s been a lot of interest in going to the south pole of the moon,” says Noah Petro of NASA’s Goddard Space Flight Center, the project scientist for the Lunar Reconnaissance Orbiter. “We just haven’t had the opportunity to do it.”

Aside from the value of examining that giant basin up-close, the south pole boasts several crucial resources for those intending to establish a more permanent presence on the moon. Chief among them are water, in the form of ice, and sunlight, for solar power.

“Ultimately, the moon will provide a proving ground to test our technologies and resources that will take us to Mars and beyond, including building a sustainable, reusable architecture,” says Sarah Noble, lead lunar scientist at NASA Headquarters in Washington, D.C.

For a long time, scientists suspected that the moon held onto some water, perhaps as a consequence of early volcanism or impactors from the outer solar system. But it wasn’t until relatively recently that they began to pinpoint just how much water might be there—and where to find it.

In 2009, the Lunar Crater Observation and Sensing Satellite, or LCROSS, went into orbit around the moon’s poles; the spacecraft then slammed its spent rocket booster into Cabeus crater, near the south pole. The impact slung debris into space, which the spacecraft descended through and studied before also hitting the moon (“I like to call it lithobraking—a hard landing,” Petro says).

In that busted up moonstuff, LCROSS found water. That, says Brown University’s Ariel Deutsch, is perhaps the strongest direct evidence for the presence of water on or near the moon’s surface, although of course, the spacecraft could only study one lunar region.

But Deutsch, who studies the distribution of ices on planetary surfaces, also points to more recent data as strong evidence for water on the moon, this time collected using a NASA instrument aboard the Indian Space Research Organization’s moon-orbiting Chandrayaan-1 spacecraft.

Announced last year, those observations reveal the presence of exposed water ice on the moon’s surface. Its distribution and depth are not well understood, but the ice appears to be sparsely scattered throughout the walls and floors of permanently shadowed regions at both lunar poles.

At the south pole, most of those icy deposits are inside the dark recesses of craters, including Shackleton, where the temperature never rises above -250 degrees Fahrenheit. The University of Hawaii’s Shuai Li, who spearheaded the report, says the ice is most likely mixed in with surface soils, rather than being solid slabs you could skate on, and that there could be between 10 thousand and a hundred million tons of it at the south pole alone.

“We do not know how deep the deposits are,” Li says. “We need rovers or landers to be there to do the in situ detections, to tell the ice layer thickness, their origins, their ages, and their more accurate abundance.”

Water is, of course, essential for human life as we know it, and extracting moon water is astronomically simpler and cheaper than hauling the stuff over from Earth. So, reliably supplying a moon base with life-supporting liquid would be among the first steps in establishing any kind of lingering lunar presence.

Secondly, water can be used to make rocket fuel. Doing that would mean setting up the necessary equipment to cleave the two hydrogen atoms from each water molecule’s oxygen atom—both of which, when separated, are fuel components.

But not all south polar destinations are created equal, and it’s possible Shackleton crater isn’t even the greatest. Li suggests that Sverdrup, Haworth, Shoemaker, and Faustini craters might have the most abundant ice deposits, a conclusion that is mirrored by work from Arizona State University’s Mark Robinson, who runs the camera aboard the Lunar Reconnaissance Orbiter.

Recently, Robinson and his colleagues decided to rank some of the south polar craters in terms of their richness in potential resources, including water ice. The crew took a look at volatiles, compounds that easily transform into vapors or gases, and compiled data on the distribution of those volatiles across the south pole. They ranked various craters in terms of size and potential resources, and emerged with a clear winner: Shoemaker crater, followed by Haworth and Faustini.

“But of course we need to get down and get some regolith under our fingernails!” Robinson says, referring to the top layers of lunar soil. “Shackleton is certainly a pretty good place to prospect. But it is inherently smaller than Shoemaker, so chances are Shoemaker could hold more ice.”

Eternal sunshine of the spotted rind

The lunar south pole also boasts some of the rare places on the moon’s surface that are almost perpetually bathed in sunlight. Although recent data confirmed that true “peaks of eternal light” don’t exist even at the lunar poles, the massive lowland basin at the south pole does host some thin crests, peaks, and crater rims that see sunlight for as many as 200 lunar days at a time.

“This has a variety of positive impacts on exploration architectures, including a benign thermal environment, and the ability to leverage solar power systems to facilitate surface presence,” says Sam Lawrence, lead scientist for lunar exploration at NASA’s Johnson Space Center. “All in all, the polar environment makes surviving the lunar night a very tractable engineering problem.”

Rather conveniently, a few of these areas are right next door to the permanently shadowed craters—including near Shackleton—meaning that humans looking to set up a moon base might want to seek this somewhat paradoxic mixture of eternal light and dark.

Harvesting the available resources, though, raises some questions.

If Blue Origin does land near the lunar south pole, could the company legally begin to mine the moon’s resources? Yes. But would it—or could it—actually own those lunar resources? Maybe.

In 1967, beset by rising tensions during the height of the space race, countries across the globe agreed on a set of rules governing the exploration and use of space. Just over a hundred countries, including the United States and the former U.S.S.R., have now signed the Outer Space Treaty, which says that space is to be free for exploration and use by all, but only for peaceful purposes.

As well, the treaty prohibits any nation from appropriating celestial territory “by means of use or occupation, or by any other means”—meaning that no patch of the moon (or Mars, or anywhere off Earth), can be considered sovereign property, ever.

So, Blue Origin can send a lander to the lunar surface, and it can even begin to extract water ice—there is nothing under U.S. law prohibiting the company from doing that. But the rules are less clear when it comes to determining whether Blue Origin would own the resources it extracts.

“The U.S. view has been that private ownership of ‘real estate,’ either on or below the surface of the moon, is not permitted. However, the U.S. interpreted the treaty to permit ownership of the natural resources after they’ve been extracted,” says Georgetown Law School’s Steve Mirmina, an expert in space law. “Sometimes people make an analogy to the Law of the Seas—no one can own the high seas, but if you go and you take fish out of the high seas, you can own those fish, you can eat them, you can sell them.”

Furthermore, the United States passed a law in 2015 allowing private citizens to own, sell, and transfer any non-living resources they extract from outer space and celestial bodies, ostensibly to set up the legal and economic machinery for asteroid mining, which has not yet come to fruition.

But not everyone agrees with the United States’ viewpoint, specifically because the Outer Space Treaty prohibits national appropriation of space.

In other words, it’s the rule of nemo dat quod non habet—"you cannot give what you do not own”—meaning that if the U.S. is not allowed to own outer space, then the country should not be able to give its citizens that right.

As Blue Origin and others hasten humanity’s return to the moon, these are the kinds of questions that are going to bedevil the space law community, says Michelle Hanlon of the University of Mississippi, another expert in space law.

“I’m all for exploration and utilization, and if you are a Jeff Bezos-type and you are going to invest billions of dollars in it, then I think you ought to be able to mine it,” she says. “But it needs some sort of management, and that’s what we’re struggling with now.”

Editor's Note: This story has been updated to include the news about the Blue Moon lander announced on May 9; the story was also updated to clarify that no regions of true eternal sunlight exist on the moon.