For nearly a decade, researchers have puzzled over what the Denisovans looked like. Now, we have our best model yet of the species' skeleton.

An illustration shows what a Denisovan might have looked like. Genetic research that created a model of a Denisovan skeleton suggests that these mysterious human relatives were similar to Neanderthals in many ways, including having low foreheads and robust jaws.

For nearly a decade, researchers have puzzled over what the Denisovans looked like. Now, we have our best model yet of the species' skeleton.

Gokhman, then a Ph.D. student at the Hebrew University of Jerusalem, was attempting to piece together the skeleton of an enigmatic ancient human known as a Denisovan. But while the Denisovans likely lived in Asia for tens of thousands of years, researchers have only found meager fossil traces—a pinky bone, a skull fragment, a fractured jaw, and a few teeth.

To give these specters form, Gokhman instead turned to the most compelling trace of their existence: their ancient DNA.

Now, in an impressive feat, Gokhman and his colleagues have mapped out a proposed Denisovan skeleton using information for 32 skeletal features encoded in DNA that was extracted from a pinky bone. The research, published today in the journal Cell, doesn’t give exact values for Denisovan proportions, but it does offer a comparative look at how this mysterious kind of hominin measured up against Homo sapiens and Neanderthals.

“Using this [method] to reconstruct the past is so exciting,” says María Martinón-Torres, the director of Spain's National Research Center on Human Evolution. “It’s a scientific wonderland.”

were different than both Neanderthals and modern humans in some important areas.

SOURCE: Liran Carmel and others, 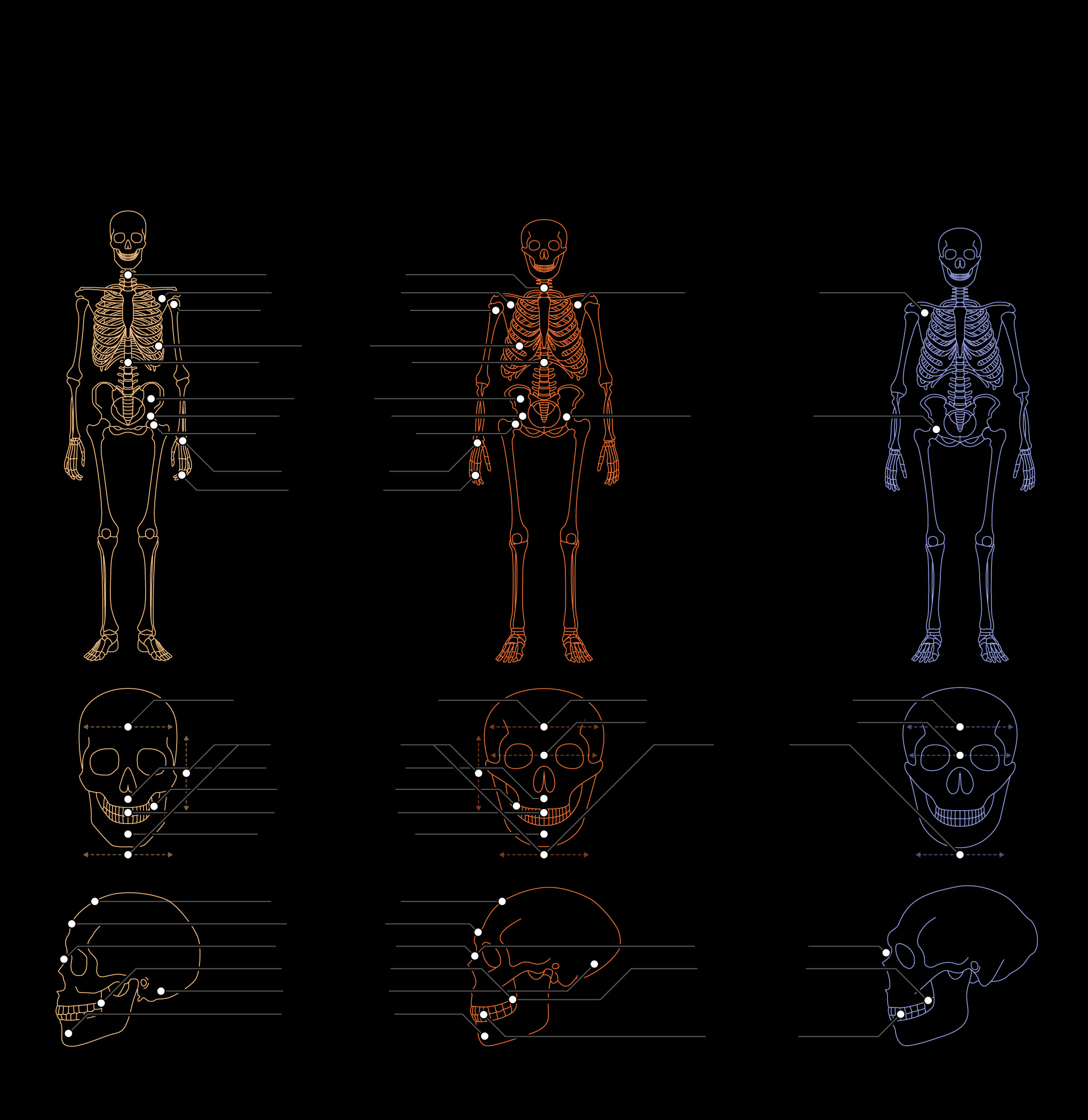 Wider and taller front of jaw

Funded in part by the National Geographic Society, the new research yields tantalizing hints that more Denisovan remains might be hiding in plain sight. Over the years, scientists have unearthed a number of fossils across Asia that don’t neatly sit on the branches of the hominin family tree. Yet with scant Denisovan bones for comparison—and the heat in much of Asia dashing most hopes for DNA extraction—many of these fossils languish in a kind of paleo-purgatory, assigned to hazy categories like “archaic Homo.” (Learn more about ancient teeth found in China that have scientists scratching their heads.)

Many of the newly proposed features might help with at least tentative identification for some of these remains. Already, the work points to Denisovan identity for a pair of fragmented skulls found near the city of Xuchang, China.

The work also probes the bigger question of what makes us human, says Liran Carmel from the Hebrew University of Jerusalem, who led the new study’s research team. While a dazzling array of hominins once fanned across ancient lands, only our species survived—and no one knows why.

“This is a big step to answer this question,” Carmel says.

Genetic ducks in a row

The discovery of the Denisovans, announced in 2010, relied on DNA extracted from a pinky bone and a hefty tooth unearthed in Denisova cave in Siberia’s Altai Mountains.

“It was the first time in the history of science that a new group of humans was discovered based on only DNA,” Carmel says. “There was a lot of mystery.”

Continued genetic study has slowly drawn the Denisovans out of the shadows. They split from their Neanderthal relatives at least 400,000 years ago, and while Neanderthals put down roots across Europe and the Middle East, Denisovans headed east throughout Asia. Along the way, they interbred with our ancient ancestors and left genetic fingerprints still seen in modern populations of Asian descent. (Learn more about how multiple lines of these mysterious ancient humans interbred with us.)

Traditionally, paleoanthropologists use fossil skeletons of ancient hominins to look for features that set them apart. But without more physical evidence for the Denisovans, there was no way to put a face to the name. That’s where Carmel and his team came in. The string of chemical “letters” that make up DNA encodes instructions for creating proteins that play into physical characteristics. This genetic material can’t simply be read like a book, though, in part because scientists must not only know which strings connect to which proteins, but also how active each gene is.

One way evolution tamps down on gene activity is methylation, or the attachment of chemical tags to specific parts of the DNA. For example, loss of methylation on certain parts of the genome results in the runaway growth of many types of cancer cells.

A year or so after the Denisovan discovery was announced, Gokhman and his team were studying methylation patterns for ancient humans, which are fortuitously preserved in ancient DNA as tweaks to the genetic alphabet soup. They mapped out these patterns in the genomes of Neanderthals and modern humans, tying some methylation differences to anatomical features or disease. But they wanted to take it a step further. Using methylation, could they predict the mysterious Denisovans’ physical features?

“We weren’t sure at all what we were going to get, because it was never done before,” says Gokhman, who is currently a postdoctoral fellow at Stanford University.

To determine how methylation might play a role, the researchers pored through a modern database that lays out the genetic mutations underlying a slew of human diseases. In these cases, mutations cause certain genes to become inactive in a presumably similar fashion to what happens due to methylation. The database even helped them understand the direction of change, like whether a mutation might cause longer or shorter fingers.

The team took precautions to only attempt to predict aspects of the skeleton that they could reasonably tie back to genes. For example, if multiple genes controlled a feature, they only included it in the model if the direction of change for each gene was the same.

Finally, with all their ducks in a row, they tested the method by predicting the known skeletal differences in Neanderthals and chimpanzees compared to those of modern humans, and they were successful with 85-percent accuracy.

Perhaps unsurprisingly, the results overall suggest that Denisovans were close in appearance to their nearest known relatives, the Neanderthals, including a low forehead and robust jaws. But there were some key differences.

“What we’re looking at here is not just another Neanderthal,” says Massey University’s Murray Cox, who was not part of the study team. “We’re really looking at a third group that looks quite different from both modern humans and Neanderthals—that’s really interesting.”

One particularly intriguing feature is the width of the skull between the parietal bones, which make up the sides and upper rear of the skull. This measure, known as the biparietal width, was strikingly large for a pair of fragmented skulls between 100,000 and 130,000 years old discovered in Xuchang—one of which had the largest biparietal widths yet measured for its time. Many experts thought the fossils could be Denisovan, but without DNA, nothing definitive could be said.

The new study predicts that the broad biparietal width—larger than that of both modern humans and Neanderthals—points to a Denisovan identity. Of the eight predicted Denisovan skull traits present in the Xuchang fossils, seven align with the team’s predictions.

“It was very revealing for us to see this,” Carmel says, describing his feeling at the time as “a great joy.”

Another test for the model came in May of this year, when researchers announced the discovery of a Denisovan jaw in a cave nestled at the edge of the Tibetan Plateau, the first definitive Denisovan remains yet found outside of Siberia. As soon as he heard the announcement, Gokhman ran to his profile to check the prediction. He was thrilled to find that all of the newly described traits matched, from the height of the front jaw to the elongated arch under the teeth.

The study is already sparking excitement among hominin researchers, who are avidly comparing the predicted measurements to other remains. Xiujie Wu, a researcher at China’s Institute of Vertebrate Paleontology and Paleoanthropology, says in an email that the proposed Denisovan features seem to line up with unidentified remains found at Xujiayao in northern China.

Not all of the proposed features fit with the few Denisovan remains yet found, like enamel thickness and fingertip width. But focusing on these traits misses the bigger picture, says Bence Viola, a paleoanthropologist at the University of Toronto and the leading expert on Denisovan fossil morphology.

“I find it absolutely awesome they can do this stuff,” he says, emphasizing that the team did the best they could with limited information. The model isn’t accurate enough to make definitive Denisovan IDs for small fossils based only on this data, he says, but it does serve as a helpful guide for future research.

“This is exciting work, pushing the boundaries of what can be gleaned from ancient genomes,” Chris Stringer of London's Natural History Museum says via email. But the work "relies on a complex chain of extrapolations," he adds, and those must now be assessed by the scientific community.

For one, it’s unclear how much variation the study overlooks across the Denisovan population, Cox notes. Genetic studies of Denisovans, including Cox’s own research, suggest that the group was incredibly wide-ranging, with some populations evolving separately for tens of thousands of years. One Denisovan line was almost as different from other Denisovans as it was from Neanderthals.

There are also still many uncertainties in how methylation patterns relate to skeletal features, says Genevieve Housman, a postdoctoral researcher at the University of Chicago studying primate genetics and epigenetics.

Mutations that cause a gene to lose function are like light switches—the gene is either on or off, says Nicholas Banovich, an expert in human genomics at the nonprofit Translational Genomics Research Institute. Methylation, however, is like a volume knob that fine-tunes the amount of gene activity. Thus, as the study authors themselves stress, the predicted skeletal features can only be considered distinct when compared with those of modern humans or Neanderthals. Quantifying the change remains out of reach.

Still, Cox and others are excited about the research: “We know essentially nothing about Denisovan morphology,” he says, “so every new little bit of insight is a big deal.”