What happens when the roof of the world melts?

The ice that has long defined South Asia's mountain ranges is dissolving into massive new lakes, raising the specter of catastrophic flooding.

The ice that has long defined South Asia's mountain ranges is dissolving into massive new lakes, raising the specter of catastrophic flooding.

This story appears in the December 2019 issue of National Geographic magazine.

Fly in a jet over Mount Everest, and you will soar over a sea of jagged white peaks stretching endlessly to the horizon.

It’s a landscape like no other on the planet—the colossal glaciers of the Himalaya, which for millennia have been replenished by monsoons that smother the mountains in new snow each summer.

But take that same jet trip 80 years from now, and those gleaming ice giants could be gone.

Earlier this year, the International Centre for Integrated Mountain Development published the most comprehensive analysis to date of how climate change will affect the glaciers of the Himalaya, Hindu Kush, Karakoram, and Pamir mountains, which together form an arc across Afghanistan, Pakistan, China, India, Nepal, Bhutan, and Myanmar. The study warned that, depending on the rate of global warming, one-third to two-thirds of the region’s approximately 56,000 glaciers will disappear by 2100.

Scientists say the accelerated melting of

hundreds of new lakes across the Himalaya

and other high mountain ranges. If the natu-

the resulting flood could wipe

in the valleys below. En-

looking at ways to

lower the most dan- 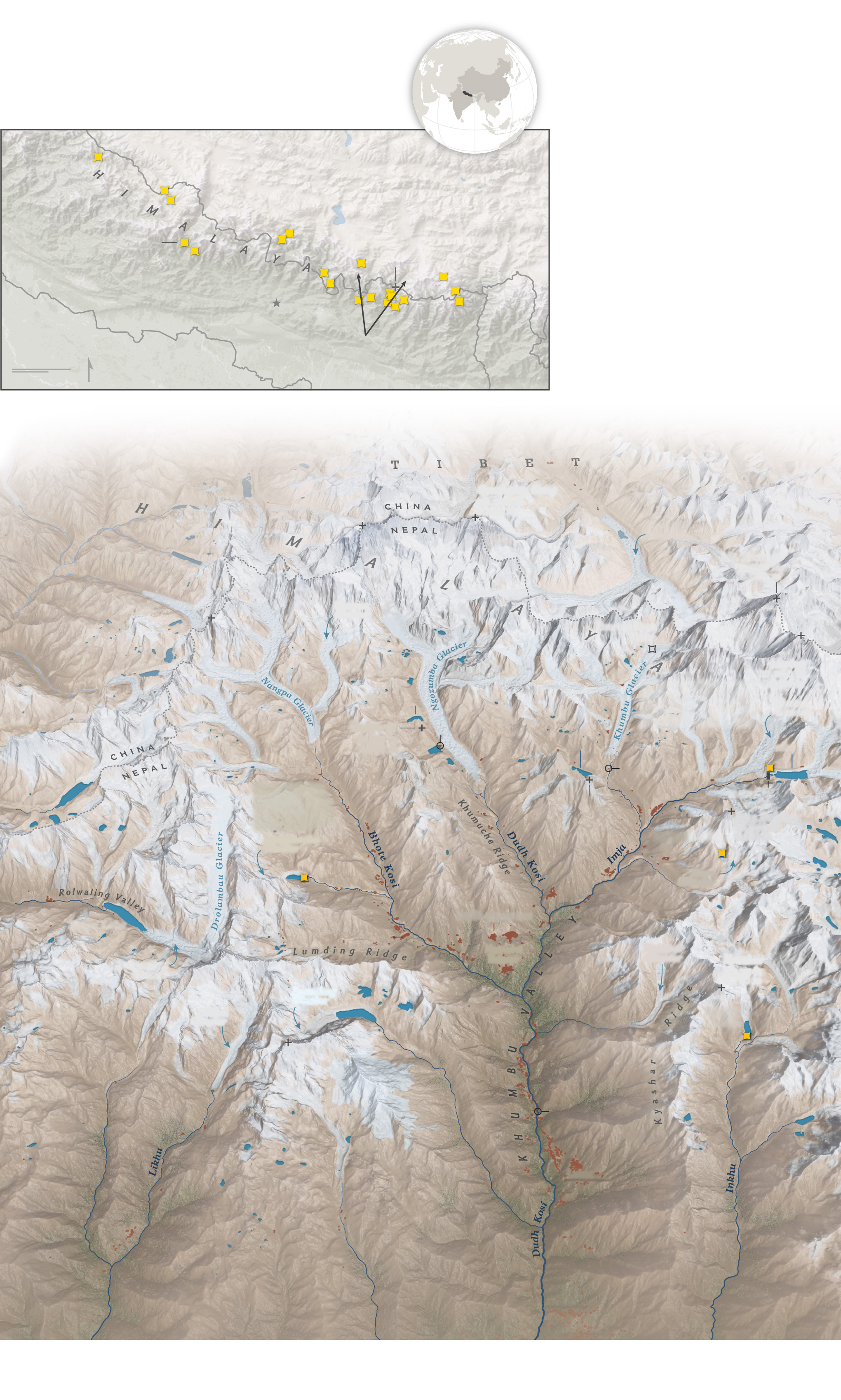 Scientists say the accelerated melting of Asia’s estimated 56,000 glaciers is creating hundreds of new lakes across the Himalaya and other high mountain ranges. If the natural dam holding a glacial lake in place fails, the resulting flood could wipe out communities situated in the valleys below. Engineers in Nepal are looking at ways to lower the most dangerous lakes to reduce the threat.

*Scale varies in this perspective. The distance from Cho Oyu summit to Lukla is 28.5 miles.

This is a dire prediction for some 1.9 billion South Asians, who rely on the glaciers for water—used not only for drinking and sanitation but also for agriculture, hydroelectric power, and tourism. But the survey also looked at a more immediate question: As the glaciers rapidly melt, where will all the water—more than a quadrillion gallons of it, roughly the amount contained in Lake Huron—go?

The answer is that the Himalaya, long defined by its glaciers, is rapidly becoming a mountain range defined by lakes. In fact, another study found that from 1990 to 2010, more than 900 new glacier-fed lakes were formed across Asia’s high mountain ranges. Because of the remote locations, scientists must rely on satellites to count them, and new lakes appear to be growing so quickly that it’s difficult for scientific teams to agree on the precise number.

“It’s all happening much faster than we expected it to even five or 10 years ago,” says Alton Byers, a National Geographic explorer and mountain geographer at the University of Colorado Boulder.

To understand how these lakes form, think of a glacier as an ice bulldozer slowly plowing down the side of a mountain, scraping through the earth, and leaving a ridge of debris on either side as it pushes forward. These ridges are called moraines, and as glaciers melt and retreat, water fills the gouge that remains, and the moraines serve as natural dams.

“They start as a series of meltwater ponds,” Byers explains, and “they coalesce to form a single pond, then a larger lake. And year by year they get larger and larger, until you have a lake with millions of cubic meters of water.”

And as the lake fills up, it can overspill the moraines holding it in place or, in the worst-case scenario, the moraines can give way. Scientists call such an event a glacial lake outburst flood, or GLOF, but there’s also a Sherpa word for it: chhu-gyumha, a catastrophic flood.

One of the most spectacular Himalayan GLOFs occurred in the Khumbu region of Nepal on August 4, 1985, when an ice avalanche rumbled down the Langmoche Glacier and crashed into the mile-long, pear-shaped Dig Lake.

The lake was likely less than 25 years old—a photo taken in 1961 by Swiss cartographer Edwin Schneider shows only ice and debris at the foot of Langmoche. When the avalanche hit the lake, it created a wave 13 to 20 feet high that breached the moraine and released more than 1.3 billion gallons—about the equivalent of 2,000 Olympic-size swimming pools—of water downstream.

The Sherpa who saw it described a black mass of water slowly moving down the valley, accompanied by a loud noise like many helicopters and the smell of freshly tilled earth. The flood destroyed 14 bridges, about 30 houses, and a new hydroelectric plant. According to some reports, several people were killed. By a benevolent twist of fate, the flood happened during a festival celebrating the coming harvest, so there were few local residents near the river that day, which undoubtedly saved lives.

“There have always been GLOF events,” Byers says. “But we’ve never experienced so many dangerous lakes in such a short amount of time. We know so little about them.” The Dig Lake flood focused attention on the risks posed by other lakes across the Himalaya. Chief among them were Rolpa Lake, in the Rolwaling Valley of Nepal, and Imja Lake, near the foot of Everest, directly upstream from several villages along the popular trekking route to Everest Base Camp.

In the late 1980s teams of scientists began to study those two lakes. Satellite imagery revealed that Imja Lake had formed after Dig Lake, sometime in the 1960s, and was expanding at an alarming rate. One study estimated that from 2000 to 2007, its surface area grew by nearly 24 acres.

“The challenge with glacial lakes is that the risks are constantly changing,” says Paul Mayewski, director of the Climate Change Institute at the University of Maine and leader of the 2019 National Geographic Society and Rolex expedition to study Nepal’s glaciers. For example, many moraines holding back glacial lakes are naturally reinforced with chunks of ice, which help stabilize the overall structure. If the ice melts, a once solid moraine may fail.

Other threats lurk beneath the ice. As melting occurs, large caves can be hollowed out inside a retreating glacier and can fill with water. These hidden reservoirs sometimes link via conduits in the ice to surface ponds. When an escape path for this reservoir suddenly melts out, dozens of linked ponds may drain at once, converging to create a major deluge. Though smaller and less destructive than GLOFs, this type of event—known to scientists as an englacial conduit flood—happens more frequently. Little is known about these floods. “Figuring out how water flows through glaciers is not so trivial,” Mayewski says.

But for the moment, GLOFs remain the primary worry. Byers points to the moraine at the foot of the Khumbu Glacier, where a cluster of small ponds currently sit. “That’s the next big lake,” he says, noting that the moraine towers above the trekking village of Tugla. “It’s only a matter of time before it turns into a potential risk.”

It’s difficult for scientists to assess the danger without conducting fieldwork, which often requires days of hiking to reach the remote lakes, but a 2011 study identified 42 lakes in Nepal as being at either very high risk or high risk of flooding. Across the entire Greater Himalaya region, the number could be more than a hundred.

Another nation with a long history of dealing with rising glacial lakes is Peru, a mountainous country that has lost up to 50 percent of its glacial ice in the past 30 to 40 years and has seen thousands of people killed in GLOF events. After a devastating flood from Lake Palcacocha wiped out a third of the city of Huaraz, killing some 5,000 people, Peruvians began to pioneer innovative ways to partially drain dangerous glacial lakes. Today dozens of lakes in Peru have been dammed and lowered—creating hydroelectric plants and irrigation channels in the process.

But there are major obstacles to implementing some of those solutions in Nepal.

The big difference between Peru and the Himalaya is the logistics, explains John Reynolds, a British geo-hazards specialist who helped direct an effort that lowered Rolpa, considered by many to be the most dangerous lake in Nepal. “In Peru you could virtually drive to within a day’s walk of the lake,” he says. In Nepal, “it could take five, six days to walk to the site from the nearest roadhead.”

Rolpa Lake is so remote that heavy machinery had to be helicoptered to the lake in pieces and then reassembled. After constructing a small dam with sluice gates, engineers slowly began releasing water and drawing down the lake. “If you draw the water down too quickly, it can actually destabilize the valley flanks, particularly the lateral moraines that impounded it,” Reynolds says. Ultimately, the water level of Rolpa Lake was lowered by more than 11 feet—the first mitigation project in the Himalaya.

In 2016 the Nepalese Army participated in an emergency project that drained Imja Lake by a similar amount. Neither measure has completely relieved the respective flood risks, but both represent, along with the installation of warning systems, a positive step.

Not all glacial lakes pose an equal threat, and as scientists continue to develop new ways to study the lakes, they are learning how to assess the true level of risk each lake poses. In some instances, they’ve found that the perceived risk was overstated, including in the case of Imja Lake. “There is no actual relationship between causality of a GLOF and lake size,” Reynolds says. “What’s critical is how the lake body interacts with the dam itself.”

And it’s not just the large lakes that pose threats, says Nepali scientist Dhananjay Regmi. “We are concerned more about big lakes, but most of the disasters in recent years have been done by relatively small lakes, which we never suspected.”

Whether the lakes are small or large, there’s little doubt that conditions for setting off floods are increasing. Reynolds points out that as the permafrost begins to thaw, massive rockfalls and landslides will become more common, and if they hit vulnerable lakes, they could trigger floods similar to the 1985 Khumbu Valley flood.

“We need to be conducting integrated geo-hazard studies of these valleys,” Reynolds says. “GLOFs are just a piece of it.”

Regmi considers the growth of lakes an opportunity for development. “Every lake has its own characteristics, and each needs to be treated differently,” he explains, noting that some might be good sources of mineral water and some might be good for generating hydropower or tourism, while others might be reserved for religious purposes.

Alton Byers is optimistic about the progress already made. “It’s not just the big infrastructure projects, like lowering Imja. People who live in remote high-mountain regions are quietly going about developing their own technology to adapt.”

He notes that residents in the Khumbu have begun to build gabions—wire cages filled with rock—to help deflect floods away from settlements. The effort paid off in 2016 when an englacial conduit flood released above the village of Chukung. The gabions held up against the torrent, diverting the floodwaters around several lodges, and the village was saved.

Freddie Wilkinson reported from Mount Everest’s Base Camp during the 2019 climbing season. His story about climbing in Antarctica’s Queen Maud Land appeared in the September 2013 issue.

This article was supported by Rolex, which is partnering with the National Geographic Society on the Perpetual Planet initiative, a series of science expeditions to explore, study, and document change in the planet’s unique regions.