Initial results from the Parker Solar Probe deliver new clues to our star's big mysteries—along with some unanticipated observations.

For billions of years, the sun has stashed its secrets in a maelstrom of energy called the solar corona. Stupefyingly hot and occasionally ultra-violent, this churning shroud of magnetized, million-degree plasma is a region that no spacecraft has dared explore—until now.

Today, four studies in the journal Nature report the first data from NASA’s Parker Solar Probe, an unprecedented mission that has been able to fly ever closer to the sun, three times so far, and taste its coronal breath. Already, these close encounters are solving some solar mysteries, and they’re revealing a treasure trove of unexpected findings.

“It’s doing things no spacecraft has ever done before,” says Sarah Gibson of the National Center for Atmospheric Research. “I just can’t wait to see what’s next—it’s really delivering.” (Here’s what Eugene Parker is most excited to learn from his namesake probe.)

Such intimate observations will untangle basic conundrums in solar physics and could help us better predict harmful solar outbursts aimed at Earth. Called coronal mass ejections, these dangerous clouds of extremely energetic particles produce shimmering auroras that can bedazzle even mid-latitude skies, but they can also knock out communication satellites, take down power grids, and could be lethal for astronauts.

“People think about risks from space, and they often think about the meteor that kills the dinosaurs,” says study author David McComas of Princeton University. “But if you get a huge space weather event that knocks out a bunch of your technology, that’s a much bigger risk to us here today.”

A mission to taste the sun

The Parker Solar Probe launched in August 2018 and made its first solar flyby that November. Over its seven-year mission, the probe will buzz by the sun 24 times, swinging lower on each pass until it finally comes within four million miles of the sun’s surface.

the heat of the sun

Its trajectory also takes it close to the planet Venus. These flybys decrease the probe’s orbital speed and will ultimately allow it to sail within four million miles of the sun, or eight times closer than any previous spacecraft.

Measure magnetic field of corona from 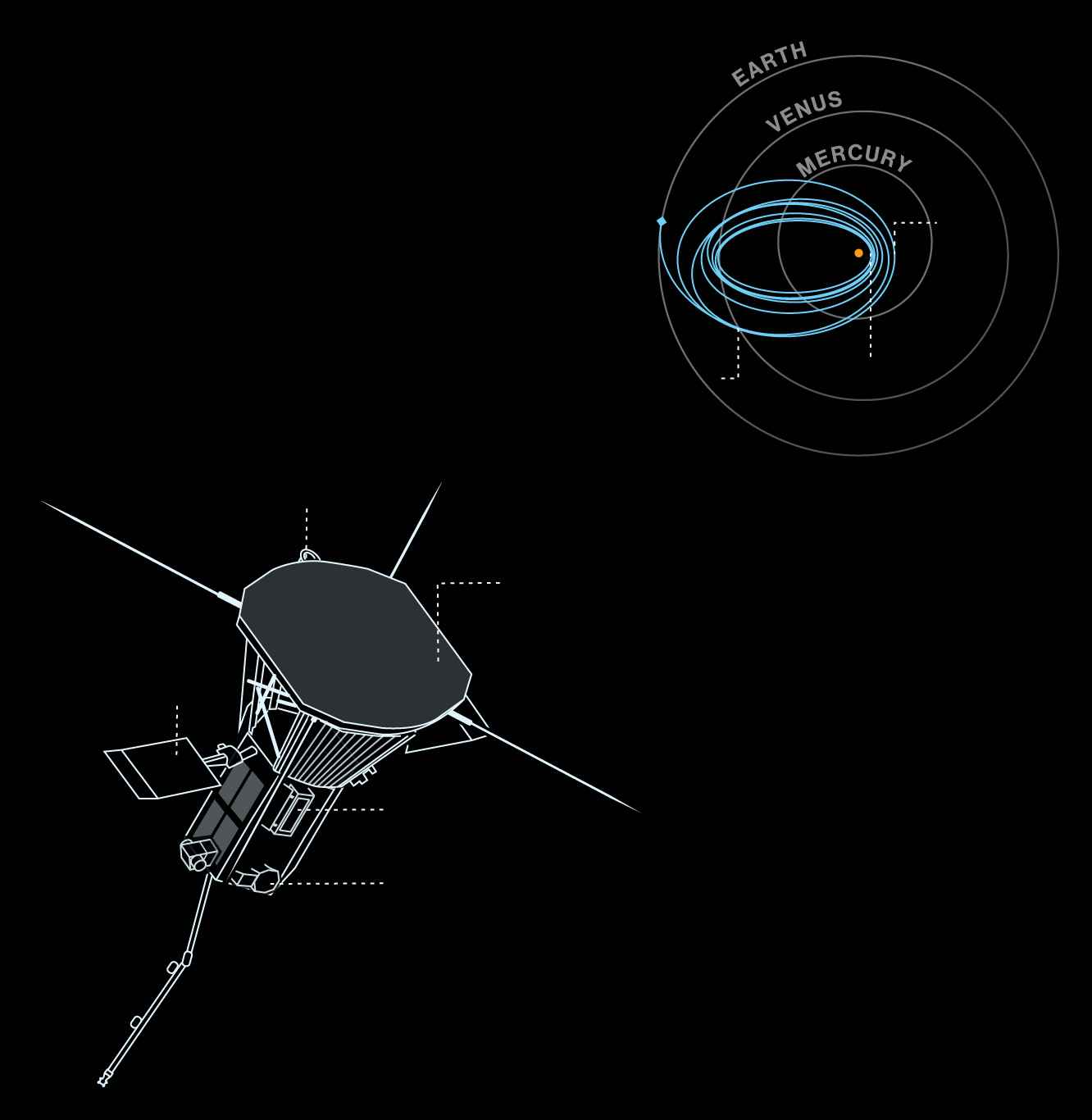 HEAT OF THE SUN

the spacecraft will orbit the sun 24 times.

Its trajectory also takes it close to the planet

speed and will ultimately allow it to sail within

four million miles of the sun, or eight times

closer than any previous spacecraft.

Measure magnetic field of corona from various spots on boom.

Carrying four instruments, the spacecraft is flying through the sun’s corona, taking measurements of the solar atmosphere and trying to sniff out the origin of the solar wind, or clouds of speedy energetic particles that the sun endlessly exhales. Getting so close to the sun is crucial, since the probe can sample the raw, pristine solar wind that we can’t easily study from Earth.

“By the time it gets to us, it has evolved. It’s changed, it’s been processed, a lot of the structure, a lot of the things that might tell us how it originated have been smeared out or smoothed out,” Gibson says of the solar wind. “Parker is diving down to where it’s young, and it’s taking observations where it’s fresh.” (Also find out what the Voyager 2 spacecraft saw when it crossed the boundary between the solar wind and interstellar space.)

Already, scientists know that the gustier, supersonic breaths originate from cold, magnetic holes in the solar corona. But the denser, slower solar wind’s origin is a mystery. So, too, is the sun’s unfathomably hot atmosphere. While the star’s face burns at a relatively cool 10,000 degrees Fahrenheit, the upper corona burns at more than a million degrees.

“The sun has to be releasing some extra energy that we don’t see,” says study author Justin Kasper of the University of Michigan. “And it actually has to dump that energy. So, we have to find some mechanism for throwing energy out into space before depositing it.”

Rogue waves in the solar sea

Perhaps most stunning among the initial observations are dramatic magnetic waves that sweep through the solar atmosphere, instantly increasing wind speeds by as much as 300,000 miles an hour and, in some cases, causing a complete reversal of the local magnetic field.

“The wind is moving so fast, and this thing that’s shooting past us is so violent, it actually flips the magnetic field 180 degrees around in under a second,” Kasper says. “Our first question was, What on Earth are these?”

During its first two passes, the Parker Solar Probe encountered maybe a thousand of these waves, which are mammoth locally but too small to detect from Earth. They last for seconds to minutes, would completely bamboozle a normal compass, and have no obvious source.

The team calls these features switchbacks, and some scientists suspect that if the waves are depositing energy, they could be playing a role in superheating the solar corona. But it’s not yet clear what is launching these kinks or if they will become stronger or more numerous as the spacecraft snuggles closer to the sun. (Here’s how some scientists are creating solar wind to study in the lab.)

Also perplexing is the sideways speed of the solar wind. The sun spins on its axis once every 24.5 Earth days, and as it pirouettes, its breathy barrage of particles initially rotates along with it. By the time the solar wind reaches Earth, it’s traveling radially, or streaming outward like water from a rotating lawn sprinkler.

That makes a certain amount of sense. But when the Parker Solar Probe swung low over the sun’s southern hemisphere, it measured the solar wind’s rotational speed and found that the wind is whipping around the star much faster than anyone thought possible at such a distance.

“It’s like 20 times larger than the standard model of the sun and its rotation predict,” Kasper says. “We’re missing something very fundamental about the sun’s corona and the solar wind.”

Overly speedy winds can affect the rate at which stars evolve; newborn stars spin quickly and slow down over eons, losing energy in the form of these winds. While it’s not looking like our sun will burn out any faster than anticipated, these strangely fast winds hint that our star may slow its rotation rate more quickly as it ages.

More immediately, the surprising rotational speed could also be affecting predictions about the trajectories and arrival times of coronal mass ejections, the solar spasms that can take out power on Earth.

“Often, the CME moves in a direction we’re not expecting … if there are large flows sideways, this could be a big reason why we do a bad job predicting coronal mass ejections,” Kasper says. “Well, I wouldn’t say we’re lousy at it, but we’re not great at it.”

As the mission continues, the Parker Solar Probe will undoubtedly reveal even more surprises. For one, the spacecraft is on the verge of detecting a long-hypothesized but never-seen area around the sun where it’s so intensely hot that “no dust can survive,” says study author Russell Howard of the Naval Research Laboratory. This dust-free area has evaded detection since its prediction in 1928—even during solar eclipses, when the near-sun environment is much easier to see from Earth.

And as the solar cycle begins to ramp up from its 11-year-minimum, scientists are expecting the mission to get even more exciting. Ultimately, the team hopes that the Parker Solar Probe will stare down the barrel of a monster coronal mass ejection – an event that will become increasingly more likely as the sun awakens from its slumber.

“We are hoping for the strongest, fastest coronal mass ejection the sun can produce,” says project scientist Nour Raouafi of the Johns Hopkins Applied Physics Laboratory. “Please, bring it on.”