Mars is humming. Scientists aren’t sure why.

InSight is designed to map out Mars's interior structures. Among the spacecraft's many instruments, InSight carries an extremely sensitive seismometer, shown in the center of this image, that's been monitoring the planet's every quiver.

Mars is humming. Scientists aren’t sure why.

Under its frigid, dusty surface, Mars is humming. The quiet, constant drone periodically pulses with the beat of quakes rippling around the planet, but the source of this alien music remains unknown.

This Martian hum is just one in a slew of fresh mysteries and discoveries detected by NASA’s InSight lander. The work, described in a suite of five studies published today in Nature Geoscience and Nature Communications, provides a peek at the surprising activity above and below the red planet’s surface.

InSight touched down on Mars in November 2018, following a harrowing descent to a flat, featureless expanse near the planet's equator. Since then, the craft has been using an extremely sensitive seismometer and an array of additional instruments to take readings that are helping scientists untangle Mars’s geologic activity and internal structure.

“It’s just such a relief to finally be able to stand up and shout, look at all this great stuff we’re seeing,” says Bruce Banerdt, the principal investigator of the InSight mission.

In addition to the strange hum, the latest batch of data from InSight describes the first active fault zone discovered on Mars, patterns and pulses in the modern magnetic fields, and hints to the planet’s magnetic past. Taken together, the information gleaned from Mars is vital to figuring out how all rocky planets form and evolve over time.

“You can’t make a model just from Earth, you need more data points,” says Suzanne Smrekar, the deputy principal investigator of the InSight mission. “It’s just super exciting that we see some of these things, and that we are trying to understand Mars.”

One of InSight’s primary goals is to measure the seismic activity of Mars. The first few months of listening for temblors were worryingly quiet. But finally, on April 6, 2019, the first "marsquake" ever detected rumbled across the red planet, thrilling earthbound seismologists.

Since that detection, the marsquakes have continued to roll in, with more than 450 recorded so far, Banerdt says. While the level of activity didn’t come as a surprise, small events seem to be happening more and more frequently. The uptick in small tremors could be a seasonal effect, but since we’ve only just started collecting records, that’s still one of the many mysteries the team is working to unravel. 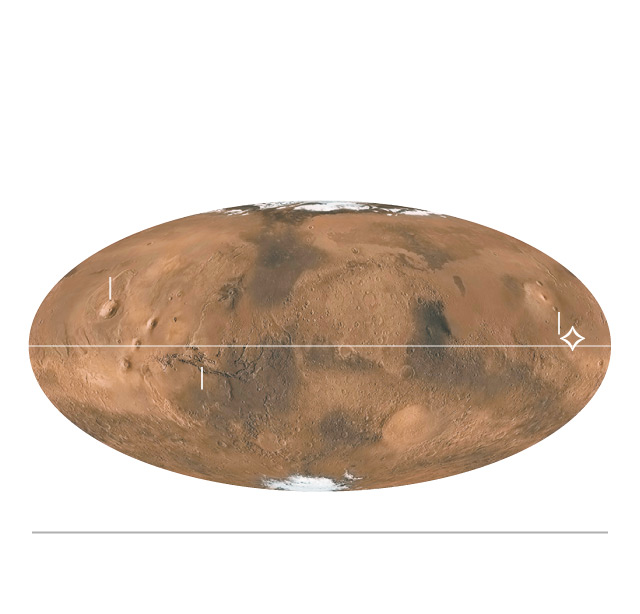 near the Martian equator.

Scientists are also unsure exactly where all these marsquakes come from. Here on Earth, the planet’s surface frequently quivers due to the slow march of tectonic plates. Stress builds up in the crust, and a sudden release generates a quake. But Mars doesn’t have global plate tectonics, so geologists are eyeing other possible triggers.

Two particular temblors InSight detected are helping scientists inch closer to answers. The pair rang loud and clear, clocking in between magnitude three and four, which allowed researchers to track them back to their area of origin—a series of deep slashes in the surface known as Cerberus Fossae, which formed 10 million years ago or less.

Expansive lava flows and floods of water once burst from these fissures onto the surface, and some fluids might still linger deep underground. As such, pockets of magma cooling and contracting, or the movement of molten rock or even water through the subsurface, are possible sources for the pair of Martian rumbles, Smrekar says. (Learn more about the first active fault zone found on Mars.)

To pinpoint the cause of marsquakes, and to get a better picture of the subsurface, scientists will have to detect more tremors, maybe even a few whoppers.

“We’d love to see a [magnitude] five,” Smrekar says. “And who knows? It’s a waiting game.”

The Martian song that never ends

InSight also detected a mysterious seismic signal that constantly hums in the background of the popping quakes.

Earth has many steady background hums, the most prevalent of which comes from the slosh of oceans and the crash of waves against the shore. But at 2.4 hertz, Mars’s drone is a higher pitch than most naturally occurring hums on Earth, which tend to fall below 1 hertz, says Stephen Hicks, an earthquake seismologist at Imperial College London who was not involved in the new studies.

Analysis suggests the Mars hum is unrelated to the planet’s roaring winds, and it seems to strengthen with the crack of a distant marsquake. The effect is a little like causing a bell to ring by yelling nearby, explains Joshua Carmichael, a quantitative geophysicist at Los Alamos National Laboratory who was not involved in the research. Your voice is a mix of frequencies, and if one matches the resonance of the bell, your shouts can set it ringing.

Perhaps the hum is related to the geology beneath InSight, which somehow amplifies that particular tone, Banerdt says. InSight sits in an ancient crater, since filled with dust and sand, which could ring by trapping waves from the quakes. However, the structure is not also excited by turbulent winds, and the basin seems a little small to generate this particular ring, Banerdt says.

The hum and the quakes could possibly come from two separate sources, Hicks says. The InSight lander itself might even be causing the mysterious resonance, Banerdt adds.

“It’s extremely puzzling,” Banerdt says. “We have no consensus idea what this is.”

In addition to revealing oddities about Mars’s current seismic activity, the latest data from InSight have uncovered something unexpected about the planet’s magnetic field: The field surrounding the lander is 10 times stronger than that predicted by satellites.

On Earth, our magnetic field is driven by what’s known as a geodynamo, created as the molten iron core inside the rotating planet steadily churns some 1,800 miles beneath our feet. This churn generates a global magnetic field that surrounds the planet and shields it from solar radiation.

Mars also had a geodynamo once, but it ground to a halt billions of years ago, perhaps allowing solar blasts to strip away a once-thick atmosphere. Only wisps of Mars’s magnetism still linger today, in the form of magnetic minerals locked in the planet’s rocks. As such, the planet has a patchwork of magnetic fields of varying intensities draped across its surface.

Orbiters have provided a fuzzy picture of that patchwork field while soaring high above the ground. But now, InSight has provided the equivalent of a high-res image, and the magnetic field is much more intense than expected. While the lander’s measurement is just a single data point, the information could eventually help untangle the strength of Mars’s past geodynamo, which could in turn answer questions about when and why Mars transitioned from a warm, wet world to a cold, dry orb.

“This measurement was our first little tiny taste—one single point—of how much stronger the magnetization might be,” says Robert Lillis, a planetary space physicist at the University of California, Berkeley who was not part of the study team.

The new studies also provide a tantalizing clue to the geodynamo’s age. The researchers traced the signals to a rock unit miles underground that’s thought to be some 3.9 billion years old—about 200 million years younger than when Mars’s geodynamo is commonly thought to have switched off.

Did the geodynamo churn in Mars’s core for longer than previously believed? It’s tough to say for sure due to vast uncertainties in the age of the rock units, cautions Catherine Johnson, first author of the new study on Mars’s magnetic fields and a geophysicist with the University of British Columbia and the Planetary Science Institute. But perhaps future discoveries from InSight will offer more clues.

InSight also detected some wobbling magnetism layered on top of Mars’s steady magnetic field—changes from day to night and signals that occasionally throb in a faint pulse.

Daily magnetic field variations are common on Earth. On the dayside of our planet, solar radiation beats down on the upper atmosphere, creating charged particles that interact with winds and Earth’s ropey magnetic field lines to generate electrical currents. As a result, the magnetic field on the dayside of our planet receives a little extra boost, while the nightside is slightly weaker. This diurnal pattern is also seen on Mars—something scientists weren’t expecting to detect from the surface.

The Martian magnetic field seems to have shorter periods of wobbling that take place right around midnight and sometimes during dawn or dusk. They don’t appear every day, with no apparent rhyme or reason behind the pattern, Johnson notes. The invisible conductor of this magnetic orchestra is likely high above the red planet’s surface. There, streams of charged particles from the sun flow around the planet, partially deflected by Mars’s weak atmosphere and patchy magnetic field.

Turbulence in these solar winds could generate waves in Mars's magnetic field, and this process or similar effects could be the source of the pulsations that InSight measures on the surface.

“We really don’t understand where these are coming from,” Johnson says. Paired analysis from InSight on the ground and an orbiter called MAVEN in the sky might help provide a break in the case.

Meanwhile, all of the InSight data from the new studies are now available to the public, with new batches publicly released every three months. Banerdt hopes that other scientists will join his team in their continued efforts to pore over the numbers.

“The more minds you have thinking about this stuff,” he says, “the more likely you are to come up with some good answers.”