This scrum of oil tankers, right next to the Los Angeles basin, emitted tons of air pollutants and CO2 while they were parked.

An aerial view shows oil tankers anchored near the ports of Long Beach and Los Angeles amid the coronavirus pandemic on April 28, 2020. Around three dozen oil tankers were anchored off the California coast as the spread of COVID-19 impacted global demand for crude oil.

This scrum of oil tankers, right next to the Los Angeles basin, emitted tons of air pollutants and CO2 while they were parked.

Giant ships lurked off the California coast for weeks in April and May, their bellies full of up to 20 million barrels of oil. This floating cache, enough to support the energy needs of the entire U.S. for a day, sat aboard an idling fleet that pumped out tons of pollutants, according to a new analysis performed by the University of College London and shared with National Geographic. These emissions could ultimately affect the long-term health of coastal communities—many of them already at risk and underserved—and they added tons of climate-warming carbon dioxide to the atmosphere.

Despite U.S. energy demand plummeting to record lows due to the coronavirus crisis, oil kept getting pumped out of the ground. The resulting oversupply taxed the limits of U.S. storage capacity. Oil trade groups spoke of a scramble to fill up empty pipelines or rail cars, but the most popular option was to charter and fill giant oil tankers. These tankers and their sea-size loads of oil began idling a few miles offshore from major shipping centers around the world, including Los Angeles and Long Beach, California. 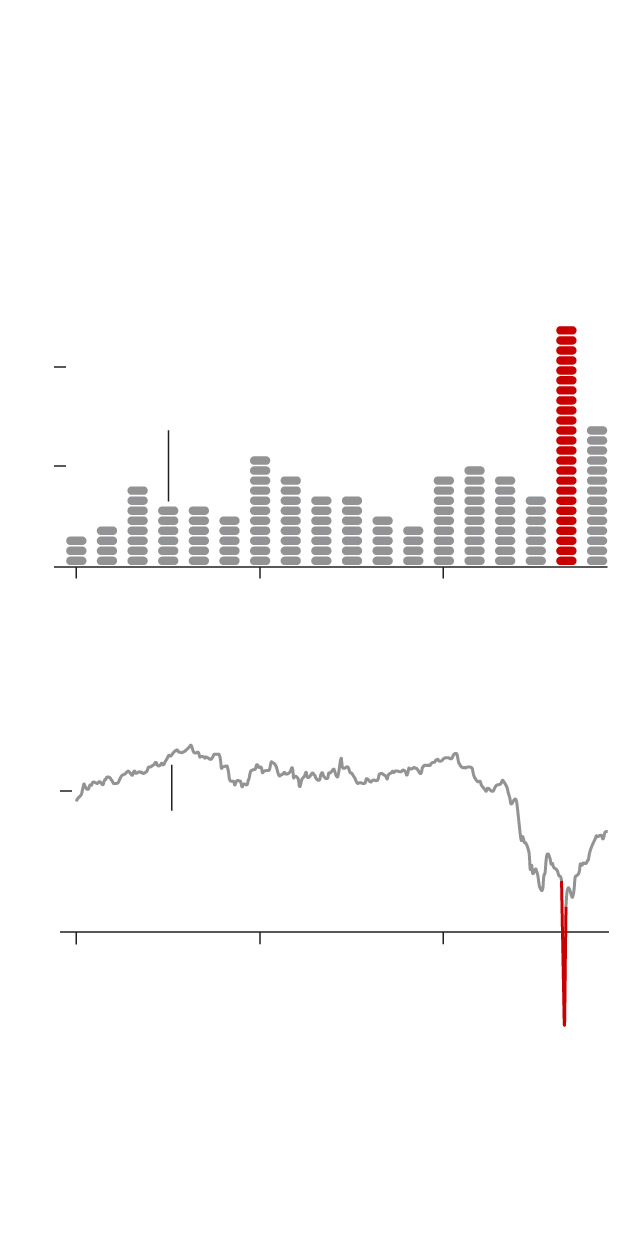 *Number on first of month except for MAY 2020 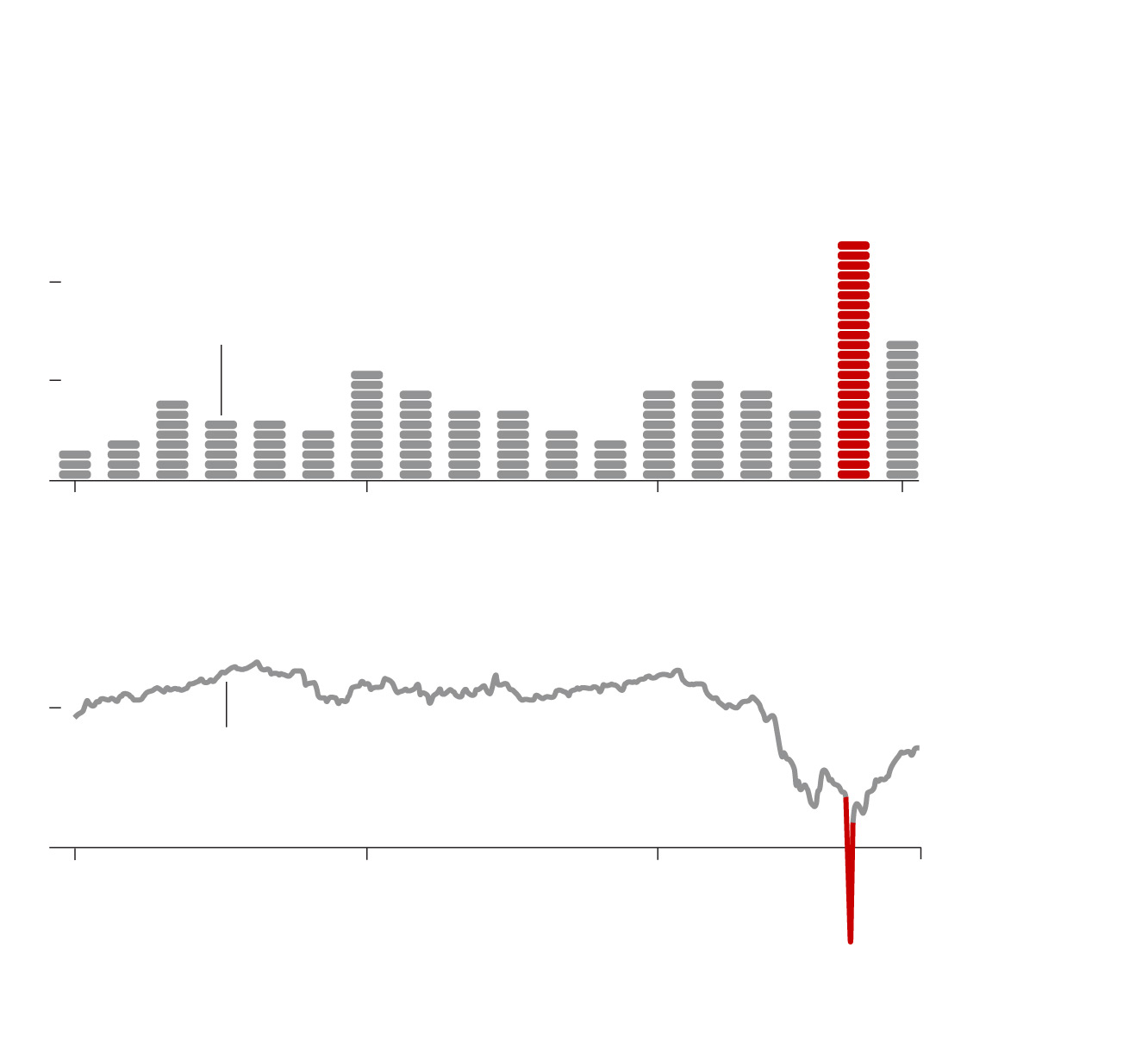 *Number on first of month except for MAY 2020

“It’s not normal to float [this many] barrels off the West Coast,” says Reid l’Anson, a senior economist with Kpler, a global analysis firm that specializes in energy commodities. He says oil refiners would normally “run” the crude oil to extract and then sell diesel, gasoline, and other distillates. But they didn’t want to in this case because both the consumer demand and the price dropped.

“Reduced oil demand resulting from efforts to slow the spread of COVID-19 has created a backlog in the supply chain for crude oil and refined products such as gasoline and jet fuel,” Robin Rorick, vice president of midstream and industry operations, American Petroleum Institute, says via email. “Tankers that typically transport oil and refined products to West Coast refineries were likely forced into somewhat of a holding pattern, including serving as interim floating storage facilities until demand starts to rebound and while the market rebalances.”

In late April, at the height of the oil market’s convulsions, 22 oil tankers and two chemical tankers sat off Southern California. That’s more than twice the average from January to early March, and four times the number from a year ago. Based on their analysis, Tristan Smith and Camilo Velandia Perico at University College London estimate that every day this 24-ship fleet idled, it spit out six tons of nitrogen pollutants, a quarter ton of sulfur pollutants, and about 290 pounds of PM2.5—the fine particles that have been correlated with higher risk of lung and heart diseases, as well as with worse outcomes from COVID-19. The tankers' PM2.5 emissions amount to a third of what the Port of Los Angeles, one of the largest sources of pollution in the city, produces on an average day.

The ships also pumped out up to 600 metric tons of CO2 each day—equivalent to 68,000 daily car trips for Angelenos. That’s small relative to global annual carbon emissions, but every bit of carbon not added to the air helps in the bid to stabilize the planet’s climate.

Over the following weeks, the number of tankers fluctuated, dipping down to 19 at the end of April and back up to 23 in early May. Only by mid-May did the numbers dip to the low teens, where they have stayed since. But if the UCL data can serve as an upper estimate, then the extra oil tankers may have added up to 15,000 tons of planet-warming CO2 and 7,250 pounds of lung-harming PM2.5 during their month or so of idling.

Exactly how much of this air pollution will end up on shore—and how much of an effect it will have on air quality and health in the long run—has yet to be determined. It takes careful atmospheric modeling and checking of air quality sensors across the whole Los Angeles basin to track the pollutants. Wind patterns, rain, and complicated chemistry influence how much of the dirty stuff gets to people’s doorsteps—and into their lungs. However, the UCL team and other experts see a stark message at play when tankers hover offshore, even as COVID-19 has been hurting communities already made vulnerable by air pollution and the resulting long-standing health issues.

Shipping undergirds much of the modern global economy. Thousands of freighters and tankers crisscross the ocean every day carrying food, consumer goods, chemicals, and oil. About 90 percent of the worlds’ goods rely on this mode of transportation at some point between their production and when they are discarded.

When far offshore, most of those ships are powered by “heavy” oil—a fuel that is much dirtier than what is used in cars or trucks. Heavy oil is essentially what’s left over after gasoline, natural gas, and the other “cleaner” fuels are distilled from crude oil. These leftovers are thick with sulfur, heavy metals such as vanadium and nickel, and a suite of other contaminants that, once burned in an engine, combust into fine, lung-damaging particles.

“They’re not the kind of thing you want to eat for dinner,” says Andrew Ault, a chemist at the University of Michigan who has studied the effects of ship emissions along the California coast. Scientists estimated in 2018 that pollution from global shipping used to contribute to about 400,000 premature deaths and 14 million extra childhood asthma cases each year.

Those fuels also produce atmosphere-warming greenhouse gases, including carbon dioxide. Annually, ocean-crossing tankers emit about 125 million tons of CO2 into the atmosphere, as much as the home electricity consumption from 21 million U.S. residents (roughly the population of Florida) over the same time period.

Most of this climate and air pollution happens in the vast expanse of the ocean, so their repercussions are often overlooked.

“Ships are just quite often out of sight, out of mind,” says Bryan Comer, an expert on shipping pollution with the nonprofit International Council on Clean Transportation. As a result, these emissions are one of the least-regulated sources of air pollution globally.

In January, the International Maritime Organization, an agency that regulates the shipping industry, introduced stricter fuel-quality rules, a step forward in the effort to clean up air pollution and climate impacts. The new regulation dialed back the amount of sulfur allowed in shipping fuels, from 3.5 to 0.5 percent. Sulfur content can be considered a rough proxy for other pollution that causes lung damage, says Matthew Loxham, a respiratory specialist at the University of Southampton in the U.K. This single shift alone is expected to prevent some 150,000 early deaths annually.

Most other fuel sources started cleaning up after the “wild west” days of the 1970s, says Kent Johnson, an engineer at the University of California, Riverside. Car fuel, truck fuel, and even train fuels were subject to tightening pollution regulations. But ships were long left out of those reforms. Until 2012, they were allowed to use heavy fuels with up to 4.5 percent sulfur. Now, when they come within 200 miles of U.S. shores, all ships must also switch to slightly cleaner fuel, which can contain up to 0.1 percent sulfur. That’s still about 67 and 100 times dirtier than diesel truck fuel and car gasoline, respectively.

A map of modeled air movement shows how pollution is carried onshore and over populated areas from idling oil tankers off the California Coast.

Thick air near ports, and traces far away

Communities near ports are all too familiar with ship pollution. Long Beach and Los Angeles neighborhoods near and downwind of the ports consistently earn the distinction of having the worst air quality, and the health impacts are borne primarily by people of color. According to the American Lung Association, some 13 million black, Latino, Asian, and American Indian residents breathe in the ports' pollution-laced air.

“The ports are an environmental justice issue,” says Yifang Zhu, an air pollution expert at UCLA’s Fielding School of Public Health. “The nearby communities are exposed to so many pollutants from ships and trucks, and the effects are very clear,” she says. Among them, more preventable lung and heart disease, an increased risk of diabetes, and higher cancer rates.

In Southern California, the ports of Long Beach and Los Angeles—which sit right next to each other—are, together, one of the biggest sources of air pollution in the region, accounting for roughly 10 percent of the local smog-forming emissions. The pair handle some 40 percent of all the imports coming into the country and serve as a gateway for oil and gas products moving their way to and from consumers and refineries within the U.S.

Much of the port-related pollution comes from diesel-burning trucks zooming in and out of the facility, but the ships themselves are also major sources. These hazards are most noticeable near where the ships are docked or anchored. But common weather phenomena, like the sea breezes that often sweep air inland from the cool Pacific, can carry gases and particles miles inland. In a 2009 study, Ault and his colleagues found traces of ship-sourced emissions from the Long Beach/Los Angeles port area all the way in San Diego, a hundred miles downwind.

“The systems we have in place to move people and goods around: They’re not working,” says Cesunica Ivey, an atmospheric chemist at the University of California, Riverside, who studies air pollution in the Inland Empire. “We can’t reach our [air pollution reduction] goals without major changes.”

And in 2008, a study for the California Air Resources Board found that ship emissions made up roughly 25 percent of the Los Angeles basin’s sulfur pollution load, 4 percent of the nitrogen pollutants, and less than one percent of the fine particles. The impacts weren’t subtle: The scientists could essentially track the path of a ship motoring down the coast from Ventura toward Los Angeles if they looked at the stations along the way that monitored ozone, a pollutant formed from chemical reactions among the sulfur and nitrogen pollution.