A new high-resolution view into Earth's crust shows what caused more than 22,000 tiny temblors to rumble in Southern California.

Early in 2016, without any fanfare, a swarm of earthquakes silently revved up in Southern California. The quakes didn’t occur every day, and most were too small for humans to feel, but month after month the tremors continued to rumble and multiply. By the spring of 2018, thousands of little quakes were striking each month, some large enough to set lamps swaying and put residents of nearby towns on edge. Over the past four years there have been more than 22,000 temblors. Yet the source behind all this activity has been a mystery.

Seismologists examined a cluster of 22,698 tiny earthquakes that lasted three and a half years.

The Cahuilla swarm occurred between the San Jacinto

The swarm began in 2016 and was likely caused by fluids infiltrating a small fault zone.

The strongest earthquake of the swarm occured

in August 2018. Light shaking was felt in the region. 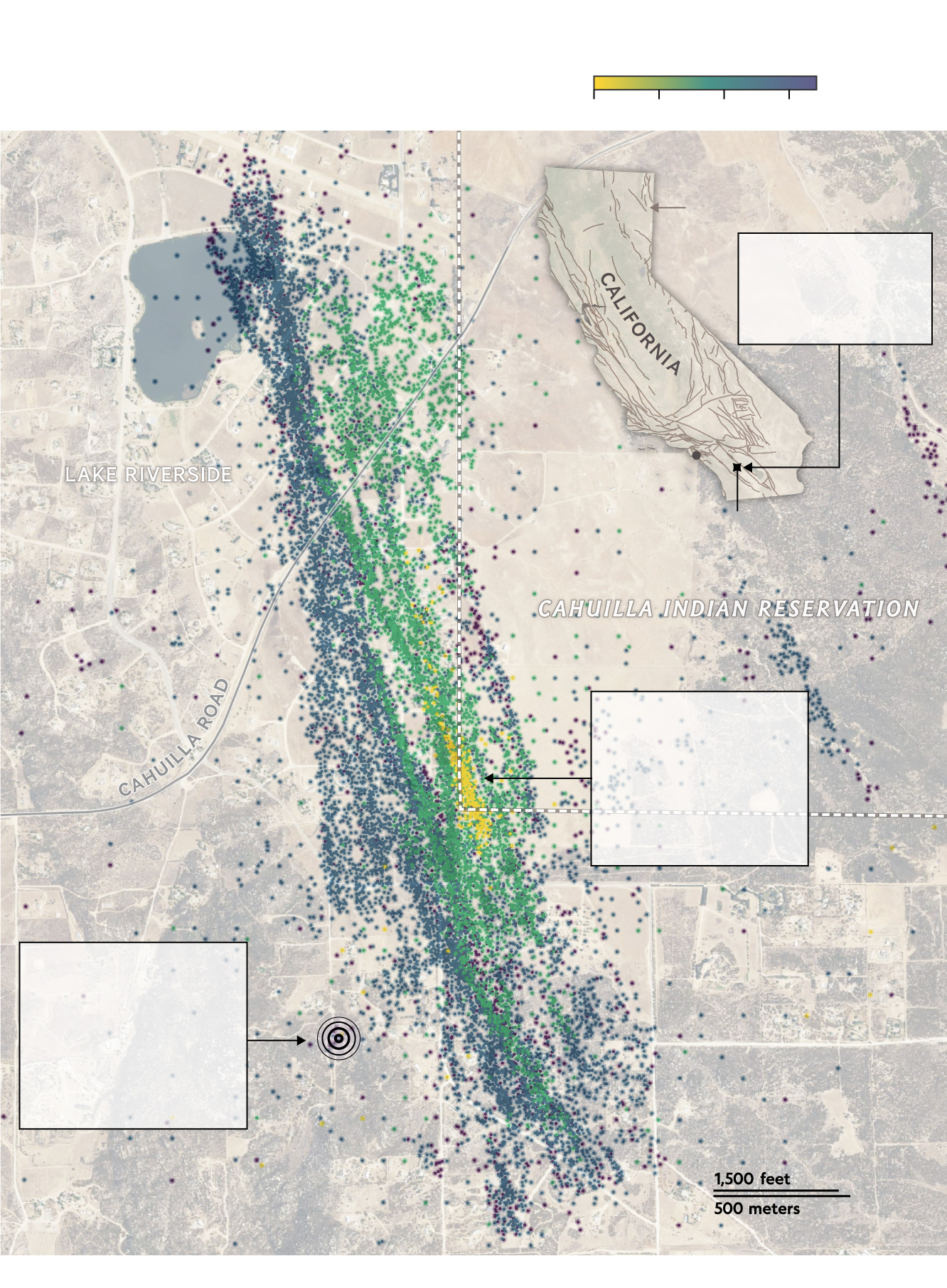 The Cahuilla swarm occurred between the San Jacinto

The strongest earthquake of the swarm occured

in August 2018. Light shaking was felt in the region.

Now, in one of the highest resolution looks at a seismic swarm yet, scientists have zeroed in on a likely cause. The results may help geologists around the world better untangle the underlying physics of earthquakes both large and small. Eventually, similar work could even improve real-time earthquake monitoring.

The analysis used a computer algorithm to tease out the locations and timing of the tiny temblors, creating a stunningly detailed portrait of the swarm activity as it unfolded along a spidery network of fractures. This intimate picture of the swarm’s progression suggests that the cluster of quakes was triggered by fluids being naturally injected into the fault system. The work hints that fluids may play a role in other swarms detected around the world—and the method used could prove useful for improving global seismic analysis.

“The detail here is incredible,” says seismologist Elizabeth Vanacore from the Puerto Rico Seismic Network at the University of Puerto Rico at Mayagüez, who wasn’t part of the study team. “This type of work is cutting edge and really where the science is going.”

Spotting a swarm of tremors

Along a fault line, the fissures in Earth’s crust were once imagined as simple structures, but “in reality, fault zones are very complicated places,” says Emily Roland, a marine seismologist at the University of Washington who was not part of the study team. Some faults can bend. Others crisscross under the ground. The fractures analyzed in the new study weave together in a subterranean labyrinth sprawling across several miles.

The earthquake swarm that revealed this intricate structure passed unnoticed until 2017, when an email from a curious citizen landed in the mailbox of Southern California Seismic Network. That email requested information about a cluster of tiny quakes in a sparsely populated stretch of the state.

A cursory look at the region didn’t reveal anything extraordinary, says Zachary Ross, a geophysicist at the California Institute of Technology who led the study, published June 18 in the journal Science. Located about 10 miles from the highly active San Jacinto fault zone, the area is often subject to tiny tremors. But by digging deeper into the region’s seismic history, the researchers realized that the email’s author was on to something: Starting nearly a year before, in 2016, a swarm of tiny earthquakes had rippled along the edge of the Cahuilla Band of Mission Indians reservation.

Such swarms of small quakes are distinct from large earthquakes, which often follow a familiar pattern: An intense event, or main shock, is followed by a series of aftershocks that taper off in magnitude and frequency over a predictable period of time.

Earthquake swarms are another geologic beast entirely. These events have little rhyme or reason to their progression, and they are sometimes made up of hundreds or thousands of small or moderate but similarly sized earthquakes. Most swarms occur as a burst of quakes over hours, days, or even months. In Puerto Rico, where swarms are particularly common, the bursts tend to last between 36 and 48 hours, Vanacore says.

While many swarms are associated with burbling volcanoes, others roll across landscapes far from any major activity. The potential for destruction from these events varies widely. The Cahuilla swarm pumped out quakes from early 2016 through last year—but all of the shakes were itty bitty, and they never generated significant damage in four years.

“How they start and why they do what they do is a matter of debate,” says earthquake seismologist Abhijit Ghosh of the University of California, Riverside, who was not involved in the study.

To investigate these events in detail, scientists needed a way to spot all the tiny tremors in reams of seismic data. Over the past several years, Ross and his colleagues have been working on new methods for detecting and monitoring earthquakes by harnessing the power of machine learning. By feeding earthquake data labeled by human experts into the algorithms of a neural network, the machine learned to recognize small earthquakes in the mess of squiggles from seismometers.

“We decided to turn this loose on [the Cahuilla swarm] dataset,” Ross says.

The result of the team’s work is a remarkably complex look at how the Cahuilla swarm unfolded. The researchers conclude that a reservoir of fluid—such as water or liquid carbon dioxide—lingered beneath the fault structure. For many years, that fluid was sealed off from the fault system, but in 2016 something breached the rocky divide. Fluid was injected into the fault, altering the pressures of the system and lubricating the cracks, which triggered the swarm’s first quakes some five miles deep.

Over the following months, the swarm slowly migrated upward and outward from this narrow starting point. A radiating front of quakes fanned out along underground fractures in the rock—precisely the way a fluid spreads. Some paths of the quake front eventually died out, perhaps as the fluids reached the end of a crack. Other times, the quakes seemed to pause at a boundary, migrating sideways before resuming their trajectory, like a river flowing around a rock. 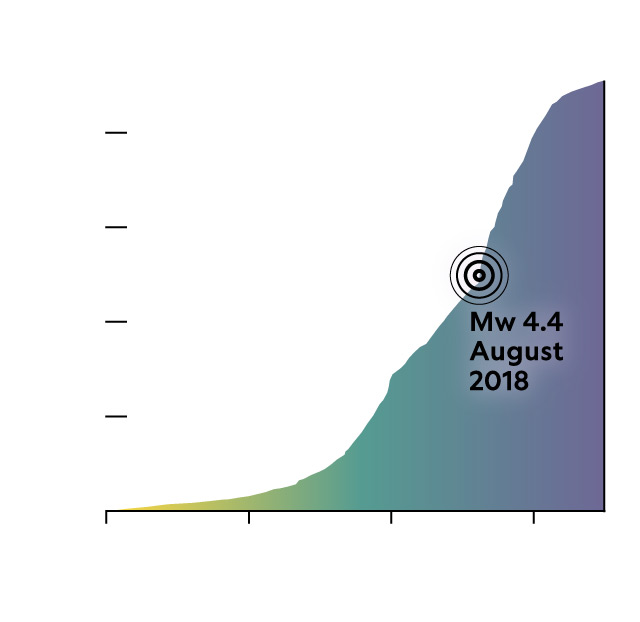 Earthquakes in the Cahuilla swarm

When the strongest earthquake of the swarm struck, the rate of tremors

In August 2018, nearly three years after the swarm began, one particularly stalwart blockage seemed to stall out the fluid’s upward progression. The quakes took a turn before eventually finding a new path to resume their spread toward the surface. That’s when the flow triggered the biggest earthquake measured in the swarm—a magnitude 4.4 event that anyone just above it would have felt rippling through the ground. The temblor was a “huge kick to the system,” Ross says, triggering a spike of smaller quakes in one last burst of energy before the swarm died out.

In total, the study provides a convincing picture of fluids rushing into a fault zone and sending a four-year shudder through the rock beneath Southern California. Similar injections of fluid may cause many other swarms around the world, though there are likely multiple causes for clusters of quakes.

“Each swarm, each tectonic area, has its own quirks, its own identity,” Vanacore says. Swarms in Puerto Rico, for example, rumble relatively deep beneath the surface and might be the result of a tear in a tectonic plate as it plunges underground.

The study also showcases how machine learning can help geologists paint a detailed picture of our planet’s subterranean realms. Each earthquake is like a dot of a pointillist painting. By studying just the largest quakes, you see only a smattering of spots. But by filling in the tiny tremors, a complete portrait of the complex physics behind our planet’s many creaks and quivers begins to emerge.

Editor’s Note: A quote in this story has been updated to correct a misheard word. Vanacore said “tectonic.”