Warned of an “unsurvivable" storm surge from the Gulf of Mexico, more than half a million people in Louisiana and Texas have evacuated in the midst of a burgeoning pandemic.

Hurricane Laura swept ashore near Cameron Parish in southwestern Louisiana early Thursday as the most powerful storm to hit Louisiana in a century. The storm made landfall as a Category 4 hurricane, bringing heavy rain, tornadoes and sustained 150 mph winds that pounded low-lying coastal communities for hours.

Laura weakened over the pre-dawn hours to a Category 2, according to the NHC, with maximum sutained winds of 110 mph, still a very dangerous hurricane.

Officials in Texas and Louisiana had worked hard to evacuate more than 500,000 residents along the coast ahead of Laura's arrival, warning of a potential “unsurvivable storm surge” that could push ashore a wall of seawater as high as two stories. Such a surge could penetrate up to 40 miles inland and cause up to 20 feet above tide levels, officials said. (Find out why storm surges are so dangerous.) 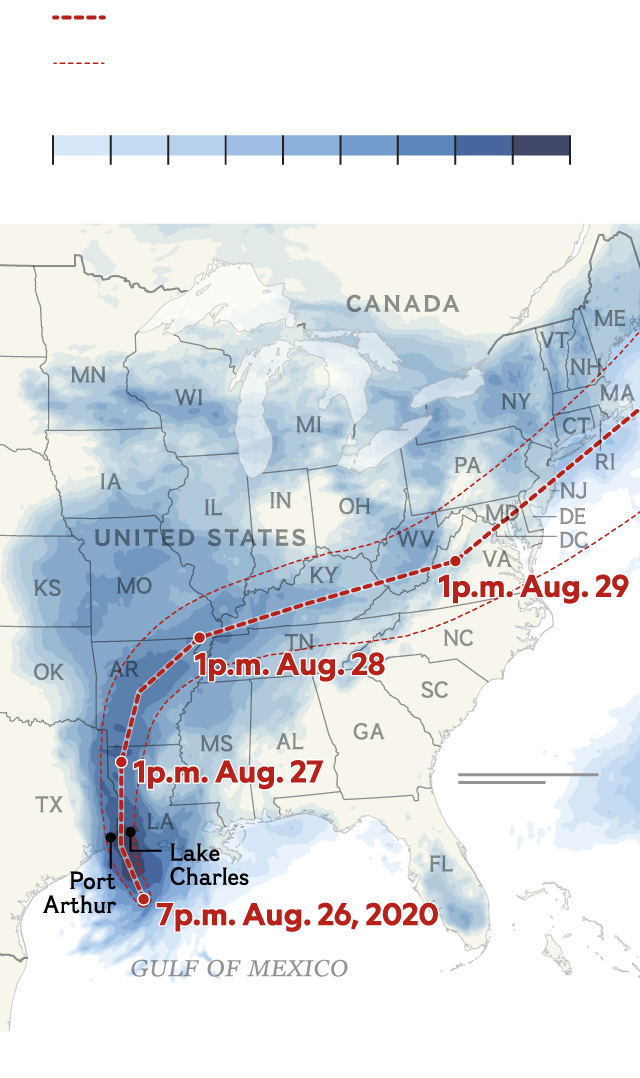 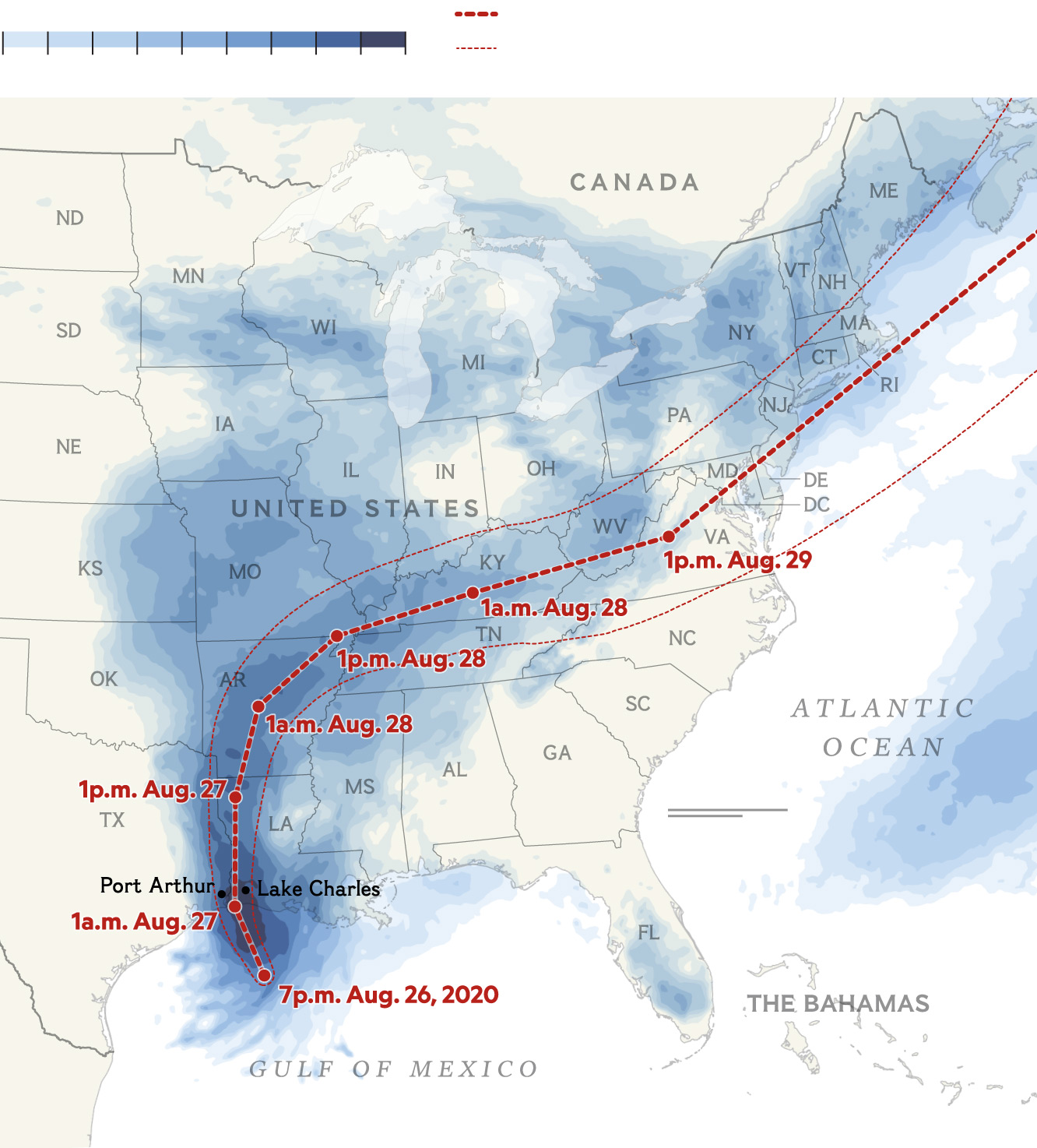 “The word ‘unsurvivable’ is not one we like to use and one I have never used before,” Louisiana Gov. John Bel Edwards said at a briefing on Wednesday. “I don’t believe I’ve had a (press) conference where I tried to convey the sense of urgency I’m trying to convey right now. Pay attention to this storm, get out of harm’s way. Our state hasn’t seen a storm surge like this in many decades. We haven’t seen wind speeds like we’re going to experience in a long time as well.”

Edwards urged residents not to let the dire forecast distract from the need to protect against COVID-19.

“We have this historical storm at a time when we’re in a public health emergency,” he said, noting that “tens of thousands of individuals” who live in areas with the highest rate of infection are now on the move, evacuating to other parts of the state in search of hotel rooms or relatives they can bed down with. On top of that, Louisiana has one million school children and college students who have returned to classrooms in the past two to three weeks. By Thursday morning, whoever could and wanted to leave, had left.

All that movement could cause “a hurricane of COVID,” says Dr. William Schaffner, an infectious disease specialist at Vanderbilt University. “All of these people moving around, going to shelters and doubling up with relatives creates an ideal environment for the further spread of the COVID-19 virus.” (Read about efforts to mitigate the spread of COVID-19 during hurricane season.)

Half a million flee the storm’s path

With such a massive storm, one bit of good luck appeared on Wednesday: Tropical Storm Marco, which took aim at the same area as a possible hurricane, instead dissipated, buying much-needed time to prepare.

“The only way to get people out is to increase the timeline of the evacuation,” says John Renne, an expert in disaster planning from Florida Atlantic University. Renne previously worked in New Orleans where he spearheaded a volunteer-led disaster response program.

That chore began even before Laura had entered the Gulf. Around 385,000 people in Texas and 200,000 people in Louisiana were ordered to evacuate, according to the Associated Press.

Several thousands people have voluntarily evacuated the Lake Charles area, and according to Mike Steele from the Louisiana Governor’s Office of Homeland Security, at least a thousand people who rely on state-assisted evacuations have been placed in hotels in Baton Rouge and New Orleans.

Nearly 350 people are being sheltered in New Orleans, where Hurricane Katrina struck 15 years ago Saturday, according to the state’s Department of Child and Family Services. In Texas, eight counties were under mandatory evacuation orders, 22 were under voluntary evacuation orders, and 225,000 hotel rooms across the state were readied for evacuees. Parts of Harris County, which includes Houston, will likely be damaged.

At a press conference in Austin on Tuesday, Texas Governor Greg Abbott urged people in the storm’s path to waste no time in finding shelter and remember to take precautions against COVID-19. In August, the state averaged 200 deaths from the disease every day, and though the incidence of new cases had fallen steadily through the month there were still more than 5,000 reported on August 26.

As of Wednesday, the Red Cross estimated they’d provided shelter to 5,000 vulnerable people in both states. In Louisiana on Wednesday, busloads of people evacuated throughout the morning, but that service was suspended in the early afternoon as flooding began and road conditions worsened.

In the eastern portion of the state, several tornadoes touched down as Laura’s outer bands made landfall.

Jefferson Parish Homeland Security Director Joseph Valiente said Highway 1, the only road out of the region for several small towns, was already flooded and impassable.