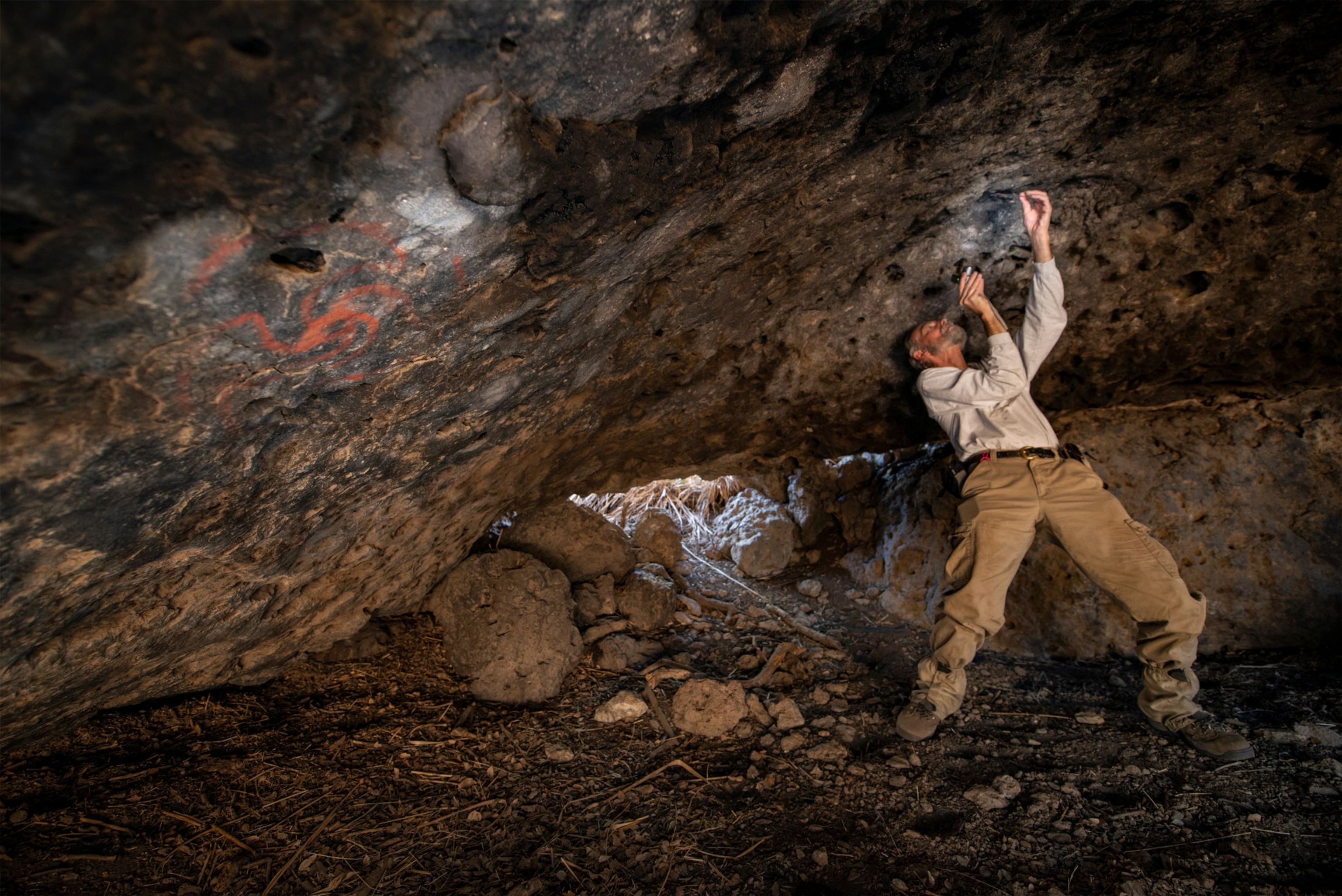 400 years ago, visitors to this painted cave took hallucinogens

Research team member Jon Picciuolo documents quids (wads of chewed-up plant matter) that were stuffed centuries ago into crevasses in the walls of Pinwheel Cave in southern California. The painted pinwheel that gives the cave its name can be seen to the left.

Researchers have debated for decades over the relationship between hallucinogens and rock art. Ancient cultures around the world have left an intriguing legacy of abstract, even psychedelic-looking images on cliff faces and cave walls, but modern researchers argue over the motivation behind the creation of such artworks.

Until now there has been no physical evidence of the use of hallucinogens at rock art sites. But a surprising discovery at a site in southern California now provides proof that at least some people experienced the site in an altered state of consciousness centuries ago.

In a study published today in Proceedings of the National Academy of Sciences, an international research team reports that 400-year-old chewed-up wads of datura, a plant with powerful psychoactive properties, have been found stuffed into the cracks of the ceiling of a sacred cave. Located near the edge of the traditional territory of the Chumash people, the cavern had been dubbed Pinwheel Cave after the swirling red painting on its curved ceiling. Researchers think this artwork might represent a datura flower, which unfurls in a pinwheel shape at dusk, and that the site may have been a place for group ceremonies where datura was consumed.

“This is the first evidence of the ingestion of a hallucinogen at a rock art site—the evidence is literally on the wall,” says Carolyn Boyd, an archaeologist at Texas State University, who wasn’t involved in the new research but specializes in Native American rock art.

Pinwheel Cave is one of several rock art sites in the Wind Wolves Preserve, which encompasses 93,000 acres to the south of Bakersfield and is owned by The Wildlands Conservancy, a nonprofit founded in 1995. Inside the cave are a few abstract red blobs and smears; the pinwheel painting, which was first recorded by archaeologists in 2002, is the most distinct artwork. The image is located on a sloping section of the low ceiling, about three feet off the ground. During summer solstice, a beam of sunlight travels across it.

Archaeologist David Robinson, leader of the new study, had been researching and documenting rock art in California for two decades; he and his colleagues started working at Pinwheel Cave in 2007. Through small excavations and radiocarbon dating, they found that the site had been occupied from around A.D. 1530 to 1890. The archaeologists discovered that more than 50 little crevices in the ceiling were stuffed with wads of chewed plant fibers, called quids. Chewed to extract nutrition, usually from plants like yucca and agave, quids are a common find in archaeological sites in the southwestern U.S.

The researchers initially took a sample of quids, hoping to find traces of ancient human DNA. While those analyses failed to turn up useful genetic evidence, subsequent tests on 15 quids showed that they contained scopolamine and atropine, hallucinogenic alkaloids found in datura. Microscopic images captured with a scanning electron microscope confirmed that most of the quids contained plant matter of the species Datura wrightii. Subsequent 3D analyses of the quids showed that these fibers had been gnashed and broken in patterns consistent with chewing.

Deadly in high doses, with potency that’s often difficult to predict, datura is very dangerous. But the plant can also be classified as an entheogen, or a psychoactive substance that’s used for spiritual purposes, in the same category as ayahuasca and peyote. In the cosmology of the Chumash people, who historically consumed the plant during initiation ceremonies and shamanic vision quests, datura was in a special category of plants seen as kin; it was personified as an old woman named Momoy, says Robinson.

“Datura is far more than a hallucinogen,” adds Devlin Gandy, a co-author of the study who received a National Geographic Young Explorers Grant in 2014 to study Chumash rock art. “It is a sacred being which is part of prayers, utilized for cleansing, as well as healing.”

Datura ceremonies, like many of Native American religious traditions, were suppressed by decades of U.S. policies of forced assimilation and displacement from ancestral lands. Many Indigenous ritual practices were explicitly outlawed until the 20th century.

“We've historically lost so much,” says Sandra Hernandez, a spokesperson for the Tejon Tribe, which has links to the Chumash people and was consulted during the research on the cave. The tribe regained federal recognition only in 2012, and while datura is still considered a culturally important plant, the tribe’s living members haven’t continued its ritual use.

Hernandez notes that the tribe’s archives contain records describing one ceremony where datura would be consumed three times over the span of a few days. She says when she reflects on that case she’s always impressed with the knowledge and expertise it must have taken to be able to ingest that much of the plant safely in a short time span.

“I find myself at times with a lack of words to define the feeling of how great it is to know how smart our ancestors were,” Hernandez says. “I can never get around that. We knew things because we communed with creators and we communed with nature.”

What does the artwork mean?

It may be impossible to know why and under what conditions the pinwheel painting was created. But the authors of the new study think the archaeological evidence inside the cave may offer clues about the context in which the art was experienced.

“There's this theory that the rock art in California is often made by shamans on private retreats,” Robinson says. The paintings thus represented the psychedelic visions these shamans, who were typically male, received during their hallucinogenic trance, and as a result these rock art sites became supernaturally powerful places meant to be avoided by the rest of the tribe.

This theory has often been driven by the fact that the art “looks so surrealistic that it had to be made by someone tripping,” says Gandy. “As both a Native person and an archaeologist I do think that is possible some rock art comes from hallucinogens, but I find that idea is far too exaggerated.”

The researchers don’t think the evidence from this site suggests that datura was consumed in order to create the paintings. Rather, they have interpreted the pinwheel cave painting as a representation of a datura plant, serving as a sign that says, “Here’s the place to take datura.” Researchers have interpreted a nearby red figure as an insect—possibly a hawk moth, known to become intoxicated on datura nectar drawn through its long proboscis—perhaps here a symbolic stand-in for the datura-taker.

Robinson thinks the density of the chewed datura quids, as well as the number of other tools and artifacts found on the cave floor directly under the painting, further suggests that this place was used communally, not only by a single shaman. Ethnographic sources indicate a tea called toloache made from mashed datura root was consumed during adolescent initiation rituals by Indigenous groups in the region, so the datura quids could represent an unrecorded way of taking the substance during an initiation or, in a separate group ceremony, in preparation for an activity like a hunting expedition.

Boyd, the rock art researcher who wasn’t involved in the study, says she agrees that the pinwheel image is that of an actual datura flower. “That said, I suspect the image simultaneously corresponds to visual phenomena experienced during an altered state of consciousness, which further reinforced the significance of the design to those who visited the site and ingested the powerful plant,” she adds.

For Hernandez, visiting the cave and looking at the paintings today is “completely an individual experience.” She says she sees the datura flower when she looks at the pinwheel painting, but notes that her family members don’t always agree. She was open to multiple interpretations of the site as a place for individuals seeking spiritual guidance or groups participating in a communal ceremony. Regardless, the cave serves as a conduit for her tribe to learn about their past.

“There are California Indians throughout this entire state that have these places that have so much to offer in terms of ecological knowledge,” Hernandez says. “It's still all around us, waiting for us as tribal people to learn these things about our ancestors.”