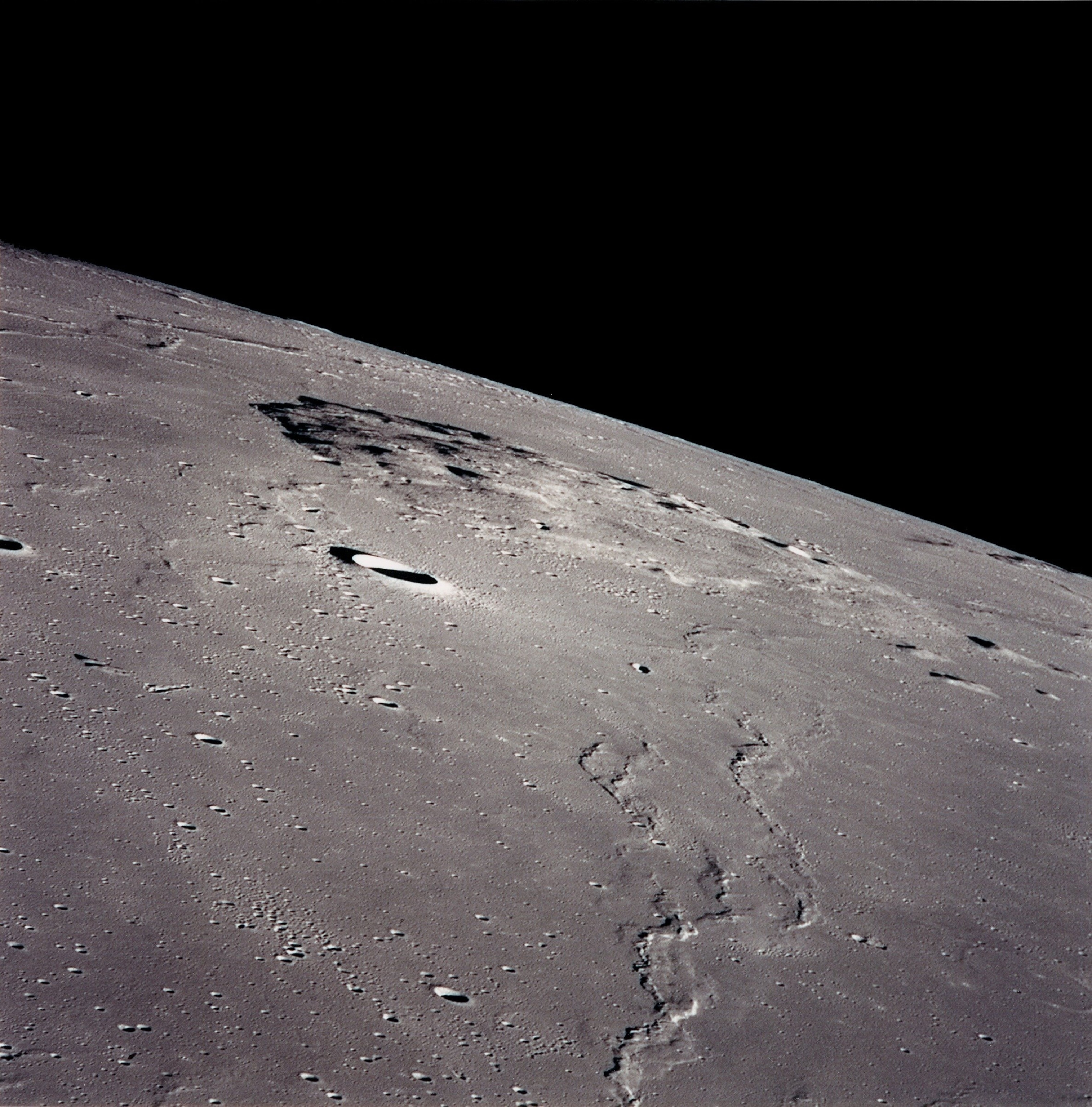 China's Chang'e-5 spacecraft will land near Mons Rümker, a volcanic mound in the northwest region of the moon's near side that reaches about 3,600 feet above the surface. This photo of Mons Rümker was taken by the crew of Apollo 15 while in lunar orbit.

NASA
Editor’s Note: The lunar samples collected by China’s Chang’e-5 mission were returned to Earth on December 16, parachuting down at about 1:00 p.m. ET in Inner Mongolia. Recovery vehicles arrived in the area shortly after touchdown to collect the return capsule, which will be transported to the Chinese Lunar Sample Laboratory in Beijing for study. The following story originally published on November 23.

China is attempting its most complex and ambitious space mission to date with the launch of its Chang’e-5 spacecraft, which will attempt to do something that has not been done since the 1970s: bring pristine pieces of the moon back to Earth.

On November 23 at around 3:30 p.m. ET, a Long March 5 rocket lifted off from Wenchang Satellite Launch Center, on the coast of China’s Hainan Island, carrying the 8.2-ton spacecraft. After separating from the rocket, Chang’e-5 will use its own thrusters to make the estimated four-day trip to the moon. The spacecraft will then release a lander that will touch down near a volcanic mound called Mons Rümker in the northwest region of the lunar near side. There, it will drill and scoop samples from the surface and store them in a protective capsule.

An ascent module on the lander will then launch that capsule back into orbit around the moon, hopefully carrying around 4.5 pounds of lunar material. Finally, the orbiting spacecraft will collect the capsule and return it to Earth, sending it on a high-speed reentry to land in Mongolia at the end of the roughly 23-day-long mission.

The returned lunar samples will “absolutely add new knowledge of the history of the moon,” says Long Xiao, a planetary scientist at the China University of Geosciences. Of particular interest is the moon’s volcanic activity, which scientists once thought lasted for a little more than a billion years following the moon’s formation 4.5 billion years ago. Now, scientists studying craters on the moon believe magma continued to erupt and flow in some regions until much more recently, erasing signs of some ancient craters and leaving behind younger volcanic rock.

The rocks sent back by Chang’e-5 “will ask us to rethink about why and how the moon’s volcanic history lasted this long,” Long says.

First approved in 2004, Chang’e-5 is a long-anticipated chapter in China’s lunar exploration plans. The Long March 5 rocket, designed with this mission in mind, required numerous breakthroughs in rocket technology, built with China’s most powerful engines and a new structural design. The heavy-lift vehicle failed during its second launch in July 2017 due to an issue with one of the engine’s turbopumps, delaying Chang’e-5 by three years.

Now that the ambitious mission is finally on its way, China is making a bold step in the new global era of lunar exploration.

“It seems like the spacefaring countries of the world now view the moon as a place for long-term exploration and potentially exploitation and settlement,” says John Logsdon, a space historian and professor emeritus at George Washington University's Space Policy Institute.

The last sample returned from the moon was delivered by the Soviet Union’s Luna 24 spacecraft in 1976. That mission sent back 170 grams (a little more than a third of a pound) of lunar material directly from the moon’s surface to Earth. Chang’e-5, however, will resemble the more complex Apollo missions—which collected 382 kilograms (842 pounds) of material in all—involving a rendezvous and docking maneuver in lunar orbit.

However, the Apollo samples are all more than three billion years old. Chang’e-5 aims to collect samples that are less than two billion years old, Long says, so scientists will be able to study the late-stage volcanism that shaped the younger parts of the rocky surface we see today.

What is the moon made of, and how did it form? Learn about the moon's violent origins, how its phases shaped the earliest calendars, and how humans first explored Earth's only natural satellite half a century ago.

Mons Rümker, near which Chang’e-5 will land, rises about 3,600 feet above the moon’s Oceanus Procellarum (Latin for “Ocean of Storms”). Oceanus Procellarum is a plain of volcanic rock that formed from past magmatic activity, making up the largest of the dark basaltic plains—known as maria, or “seas”—that are visible on the surface of the moon with the naked eye. Some of the rock in this region is thought to be much younger than all other lunar samples.

The moon’s volcanic history is not the only mystery that Chang’e-5 will attempt to solve, however. The landing area allows for “all kinds of fundamental hypotheses to be tested,” says James Head III, a planetary scientist at Brown University.

Looking at the mineralogy of the rocks and soils near Mons Rümker could help reveal why the region has an unusual and unexplained concentration of certain elements—potassium, rare earth elements, and phosphorus—and a strong radioactive anomaly driven by the elements thorium and uranium. “There are really good fundamental questions to be answered that will change our thinking about the moon big time,” Head says.

The mission could also help calibrate timescales across the entire solar system. Counting the size and number of craters in an area gives clues about the age of the site, because impact craters accumulate at an estimated rate over time. Dating lunar samples can provide more accurate ages not only for the moon’s surface, but also for other pockmarked objects across the solar system, which are often dated by comparing their surfaces to similarly aged regions of the moon.

The new dating analyses “could potentially challenge theories and assumptions and pose new questions” about how our planetary neighborhood formed, says Clive Neal, an expert in lunar geology at the University of Notre Dame.

Securing the samples and studying the surface

Chang’e-5 will sample material in two ways. A drill will bore to a depth of around six feet, while a scoop will collect rocks and lunar soil from the surface. Once on Earth, the precious cargo will be transferred in a sealed container to the Chinese Lunar Sample Laboratory located in Beijing's National Astronomical Observatory. Scientists at the facility will study the mineralogical and chemical makeup of the samples, including measuring the abundance of certain radioisotopes—elements that decay over time—to precisely date them.

Long says the mission is a huge event for the lunar and planetary science community in China. “We will have new and our own lunar samples to study … [and] it will inspire young students and scientists to engage in planetary science and exploration.”

It is unclear for now if these samples will be shared with scientists outside China. Karl Bergquist, head of international cooperation at the European Space Agency, said there have been discussions between ESA and the China National Space Agency about sending samples to other labs, but no agreement has been reached yet.

However, ESA will be involved in the mission, Bergquist says, by providing “support from our deep space network in the critical beginning of the mission and then later with backup support for the mission’s critical phases.”

The lander will also carry science instruments similar to those on the ongoing Chang’e-4 mission—the first in history to land on the far side of the moon. A lunar penetrating radar will allow scientists to discern disparate layers of rock down to a depth of hundreds of meters, revealing the local geologic history. And an imaging spectrometer, like that used by Chang’e-4 to detect rocks that may have come from the deep lunar mantle, will be used to analyze the composition of the landing site and search for water-containing minerals.

China’s Apollo-like approach to collecting lunar samples suggests the country is looking to develop technologies that will be needed for even more ambitious missions. “This is just one mission in a long, planned sequence of robotic lunar exploration by China,” Logsdon says.

After the successes of the lunar orbiters Chang’e-1 and Chang’e-2, and the landers and rovers of Chang’e-3 and Chang’e-4, China has laid out plans for further exploration targeting the south pole. If Chang’e-5 successfully completes its mission, an identical spacecraft called Chang’e-6 will then attempt a sample-return mission from the moon’s south pole—an area of intense scientific interest given the large amount of water ice and the presence of one of the largest impact craters in the solar system, the South Pole-Aitken basin.

The more advanced Chang’e-7 and Chang’e-8 spacecraft are also slated to land near the south pole to carry out analysis of the region and test new technologies, including detecting and extracting materials that could be useful to future human explorers, such as water and hydrogen, and testing 3-D printing on the lunar surface. The long-term aim is to establish an International Lunar Research Station around 2030 to support robotic and, eventually, crewed missions.

“There is a convergence of human and robotic efforts to eventually have China launch human missions to the moon,” Logsdon says.

To gain more experience in human spaceflight, China will begin constructing its third space station, by far its biggest and most complex, in low-Earth orbit in 2021. The Chinese space station, designed to last around a decade, will provide valuable experience while the country prepares to send people farther out into space.

The Chang’e missions are also laying the groundwork for future robotic missions to other planetary locations. The country already has an orbiter and rover on the way to Mars, known as Tianwen-1, which will study the chemical makeup, magnetic field, and surface structure of the red planet. And Chang’e-5 is a crucial step toward an audacious future sample-return mission to Mars, a goal laid out in China’s space exploration roadmap for late this decade, as well as a mission to sample a near-Earth asteroid.