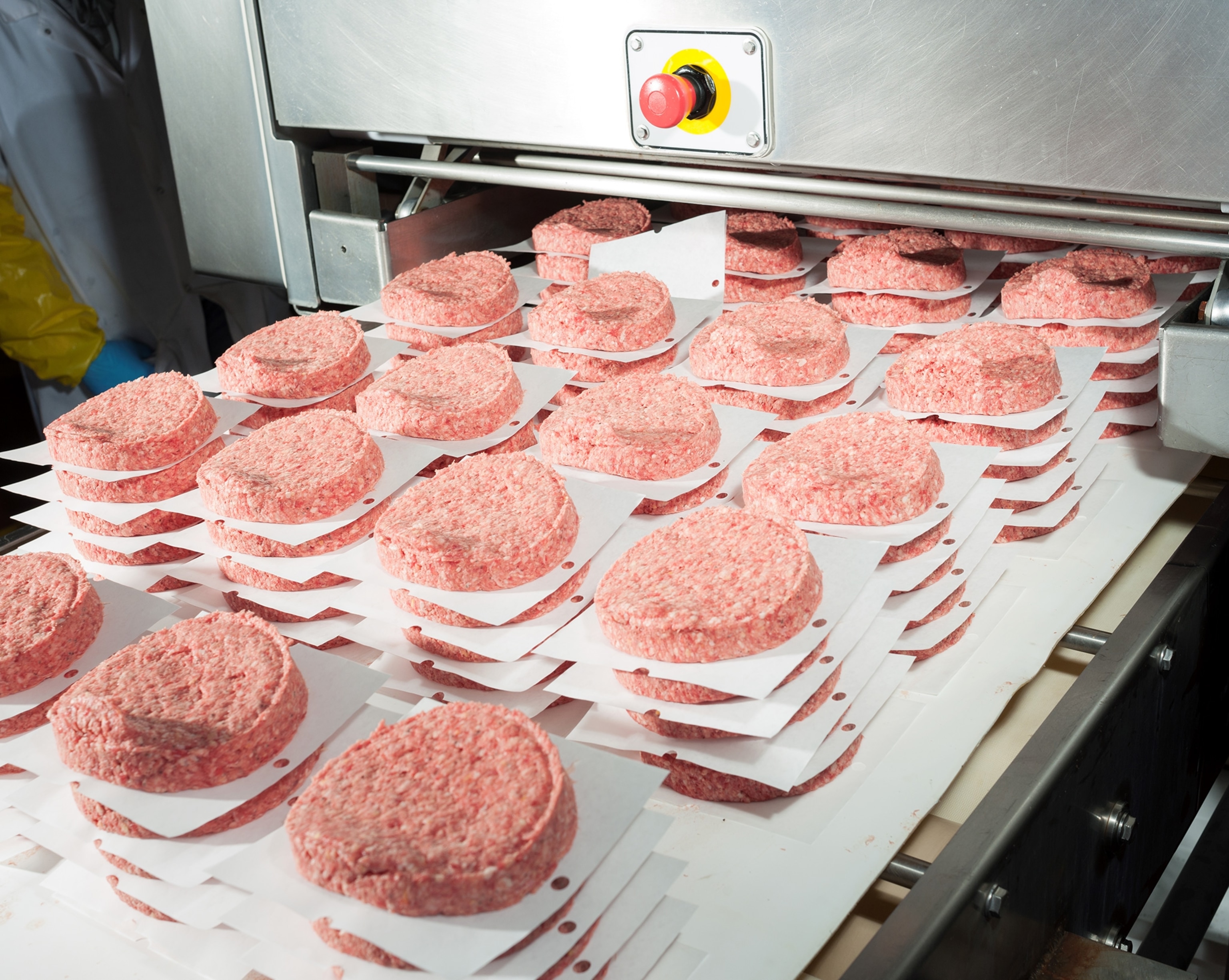 Used in fast food packaging, the long-lasting chemicals can seep into food—and build up in our bodies.

A patty-forming machine at a packing plant in Amarillo, Texas. Fast-food patties like this often end up in packaging coated with a chemical that's proving to be harmful to humans that consume them.

From the calories to the additives, there are many reasons fast food is unhealthy, but a new study of a toxic chemical called PFAS reveals the packaging that contains it may also be doing harm to our bodies.

PFAS, or per- and polyfluoroalkyl substances, refers to a class of chemicals used abundantly in common household items to make objects water or fire resistant. A new study published in the journal Environmental Health Perspectives looked at levels of PFAS in people who ate fast food versus those who ate homecooked meals.

Using data from the CDC’s National Health and Nutrition Examination Survey (NHNES), a comprehensive and regularly maintained dataset, researchers looked at PFAS in blood samples collected from more than 10,000 people from 2003 to 2014.

Five commonly used types of PFAS were found in the blood of around 70 percent of those surveyed.

The survey also questioned people on how often they had eaten fast food over the past 24 hours, week, and month.

After a 24-hour period, those who had eaten fast food consistently showed an increase in the amount of PFAS in their blood. Unlike other common contaminants, which pass through the human body quickly, PFAS can linger for years, meaning that regular fast food consumption adds more PFAS to the system, scientists say.

It’s unclear at what threshold PFAS begins to take a toll on human health. A number of studies have linked the chemical to cancer, thyroid disorders, hormonal changes, and weight gain.

Washington state and the city of San Francisco have both passed legislation to limit the use of PFAS in food containers.

A 2017 study conducted on 400 fast food wrappers and containers found that more than half of bread and dessert wrappers contained the fluorine compound. It was also present in nearly 40 percent of sandwich and burger wrappers, and 20 percent of paperboard, the stiff containers used to hold french fries. The chemical is commonly added as a barrier to packaging because it resists water and grease, making food more portable.

It’s those same tough properties that concern those who study the effects PFAS might have on the body.

“We’re still learning about health effects that may occur at lower and lower levels of exposure,” says study author Laurel Schaider, an environmental engineer and chemist at the Silent Spring Institute.

“Food is just one source of exposure,” she says, noting that PFAS is commonly found in paint, carpeting and clothing. “At this point I would say it makes sense for people to try to reduce their exposure, [but] we’re not able to link a certain rate of fast food intake with harmful health effects.”

She says the regular ingestion of PFAS may have cumulative effects on human health.

PFAS is so notorious for its inability to break down that the compounds in it are often referred to as “forever chemicals.” Where other contaminants like bisphenol-A clear from the body in a number of hours, even the weakest PFAS can remain for months.

Demonstrating a measurable health impact from eating five PFAS-contaminated cheeseburgers a week versus just one is difficult because of how ubiquitous the chemicals are.

To see the impact a chemical might have, scientists first rely on studies in which lab animals like rats and mice are exposed to varying degrees of a certain toxin. Those animal studies have shown PFAS exposure consistently results in damage to liver, kidneys, and the immune system. Tumors are also common and some strains of PFAS show signs of causing cancer and thyroid disruption.

Scientists also look for trends in diseases at the population level. For this, large study groups of thousands of people are needed to control for PFAS alone.

It took dozens of population studies to show that early-in-life lead exposure could impact cognitive performance later in life, a finding that helped set stricter regulations on how profusely lead could be used. Scientists have yet to reach a consensus about bisphenol-A (or BPA), a chemical the FDA deems safe that some research indicates could be an endocrine disruptor.

The amount of exposure an individual has to PFAS can vary widely, says Schaider, making it difficult for scientists to construct a historical snapshot of when they consumed the contaminate.

“There are windows of susceptibility for certain diseases, but it’s very difficult when studying adults to go back and recreate their exposures,” she says.

Rolf Halden is the director of Arizona State University’s Center for Environmental Health Engineering. He says the study’s data show a clear link between fast food and PFAS consumption, but he worries more about the overall abundance of PFAS in consumer goods.

“I am less interested in the aspect of popcorn and fast food and more fascinated that we see [that] 70 percent of the U.S. population is getting exposed to chemicals that cannot degrade,” he says.

In addition to the unknown health consequences of consuming food contaminated with PFAS, Schaider says consumers should be concerned about the impact PFAS has on the environment when it’s discarded. In unlined landfills, PFAS can leach into groundwater. Earlier this month, a report by the Environmental Working Group found that tap water going to 7.5 million Californians tested positive for the contaminant.

In addition to Washington and San Francisco, California, New York, and Rhode Island have each proposed restrictions on PFAS. Last month, Denmark was the first country to ban it from food packaging.

Of the study results, Halden adds: “It would be naive to think what’s here is the complete exposure to PFAS. That [total exposure] is much larger and still growing more complex.”