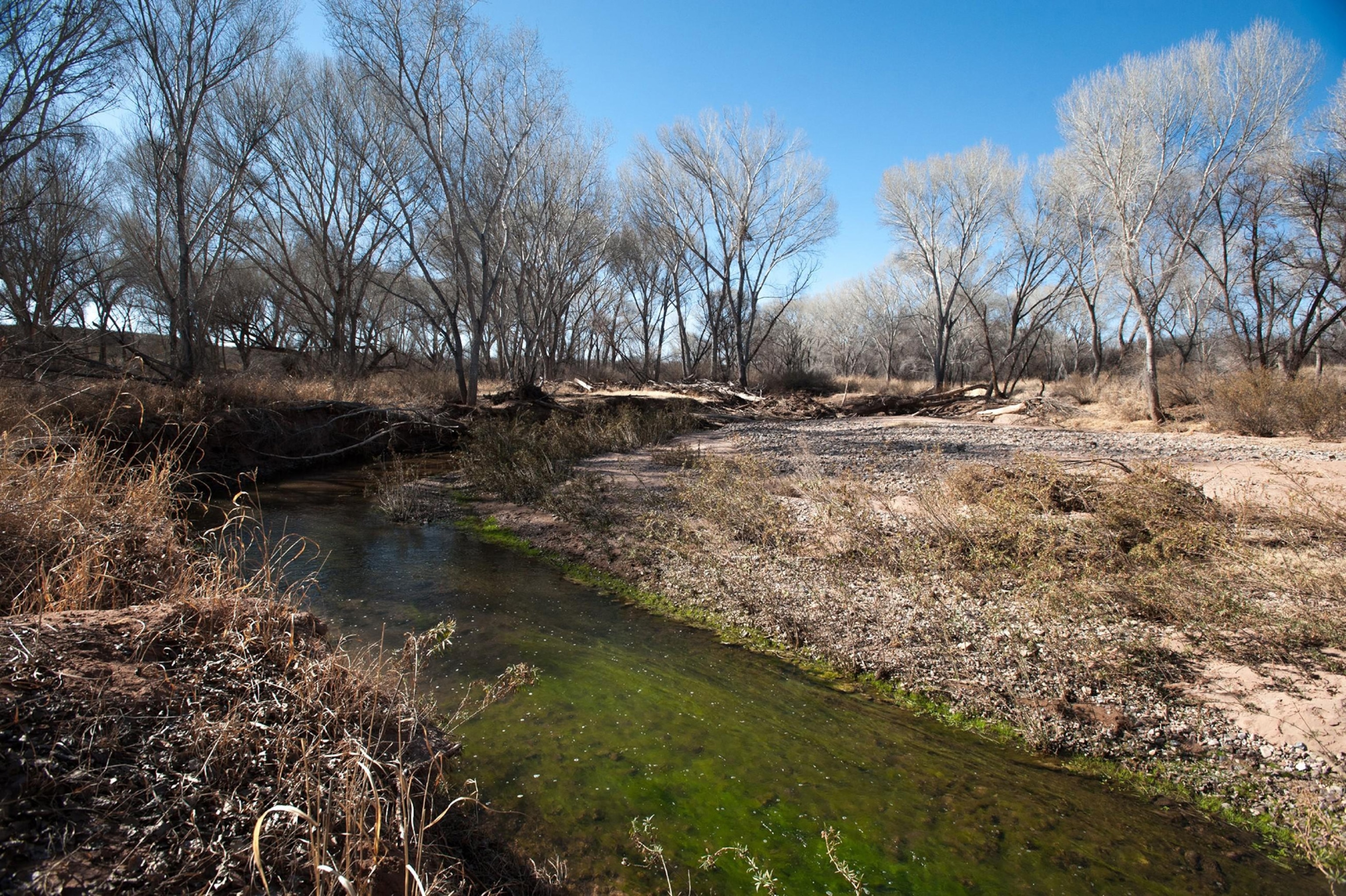 By 2050, thousands of rivers and streams worldwide could pass a critical ecological threshold, new research shows.

The San Pedro River in Arizona has seen its flows decrease over the past few decades because of groundwater extraction nearby. The river's habitats have suffered as water levels dropped.
Photograph by Will Seberger/ZUMA PRESS, Inc/Alamy

There’s more fresh water hidden below Earth’s surface in underground aquifers than any other source besides the ice sheets. That groundwater plays a critical role for rivers worldwide, from the San Pedro to the Ganges, keeping them running even when droughts bring their waters low.

But in recent decades humans have pumped trillions of gallons out of those underground reservoirs. The result, says research published Wednesday in Nature, is a “slow desiccation” of thousands of river ecosystems worldwide. Already, somewhere between 15 and 21 percent of watersheds that experience groundwater extraction have slipped past a critical ecological threshold, the authors say—and by 2050, that number could skyrocket to somewhere between 40 and 79 percent.

That means hundreds of rivers and streams around the world would become so water-stressed that their flora and fauna would hit a danger point, says Inge de Graaf, the lead author of the study and a hydrologist at the University of Freiburg.

“We can really consider this ecological effect like a ticking time bomb,” she says. “If we pump the groundwater now, we don’t see the impacts until like 10 years further or even longer. So what we do right now will impact our environment for many years to come.”

The last undammed river in the U.S. Southwest, the San Pedro of southwestern Arizona, used to gush and roil. Birds chirped and splashed on its banks when they stopped by on their migrations. Rare fish swam in its pools.

But in the 1940s, wells started to pop up in the nearby area, sucking clean, cool water out of the region’s underground aquifers.

It turned out that a good portion of the water that flowed through the river came not from rain and upstream snowmelt, but from those underground sources. The more water that got pumped out of the aquifers, the less flowed into the river—and the wetlands, cottonwood stands, fauna, and rushing waters of the San Pedro all suffered.


(Read about the vanishing Ogallala aquifer, one of the most important water sources in the western U.S.)

Groundwater is the hidden scaffold propping up much of modern life. Globally, about 40 percent of the food we grow is watered with liquid extracted from below Earth’s surface.

But many of the aquifers from which this water is extracted took hundreds, or even tens of thousands of years to fill: The water inside may have percolated through cracks in the earth when giant ice sheets last covered New York City 20 thousand years ago.

Much of that water is being removed much faster than it can be replenished. That has enormous potential consequences for people who want to drink water grow and crops in areas that don’t get enough rain. But far before those impacts emerge, the effects will—and in fact already have—hit rivers, streams, and the habitats around them.

“Think of an aquifer like a bathtub full of water and sand,” explains Eloise Kendy, a freshwater scientist at the Nature Conservancy. Then, imagine running your finger lightly through the top of the sand, creating a little trail. That little trail fills up with water that percolates through the sand into the “stream.”

“If you pump out just a little bit of water out of the bathtub, that stream is going to dry out, even though there’s plenty of water still left in the bathtub,” she says. "But as far as healthy rivers go, you’ve destroyed it. But because rivers don’t scream and shout, we don’t necessarily know that they’re in trouble.”

(Read about how two-thirds of the world’s longest rivers don’t flow freely anymore).

Water is life, until it’s gone

In the new research, the team took a global look at where groundwater is already being extracted at such a rate that it has caused water levels to drop so much in rivers and streams that they cross a critical environmental threshold: when water levels drop to less than 90 percent of the average flow during the dry season, the time when groundwater matters the most to river flow. Passing that threshold for more than three months of the year, for at least two years in a row, endangers the flora and fauna of freshwater systems, says Brian Richter, a water expert and scientist at Sustainable Waters.

“There can be just a very small depletion of water at those sensitive times, but ecologically it’s meaningful,” he says.

Freshwater species, like ones that depend on healthy rivers and streams, are some of the most endangered in the world.

In the new analysis, de Graaf and her colleagues found that 15 to 21 percent of watersheds that pump groundwater are already past this threshold (about half of all watersheds worldwide are pumped). As climate change exacerbates droughts in many parts of the world, the stresses on groundwater—and by extension, on rivers and streams—is likely to get much, much worse, they say.

Their predictions might be conservative. As a baseline, they used the global water demand in 2010 and spun their climate model forward to see how stresses on groundwater systems might develop. But as populations swell and the demand for food rises, those stresses could increase for reasons other than climate change, speeding along the extraction from underground water sources.

But the effects of overpumping groundwater take years, if not decades, to become visible. Changes in rain have immediate, obvious effects on river flow, explains Gretchen Miller, a hydrologist and engineer at Texas A&M University: When it pours, rivers often rage. But groundwater is hidden: changes take much longer to come to light, and don’t always manifest in the place where the pumping occurs. That makes aquifer management issues extra challenging, and only a small fraction of watersheds have plans in place to address the looming problems.

In the meantime, rivers and streams are the “canary in the coal mine,” says Richter. “They’re the signal that says we’re using water in an unsustainable fashion, we need to take a hard look at what we’re doing.”