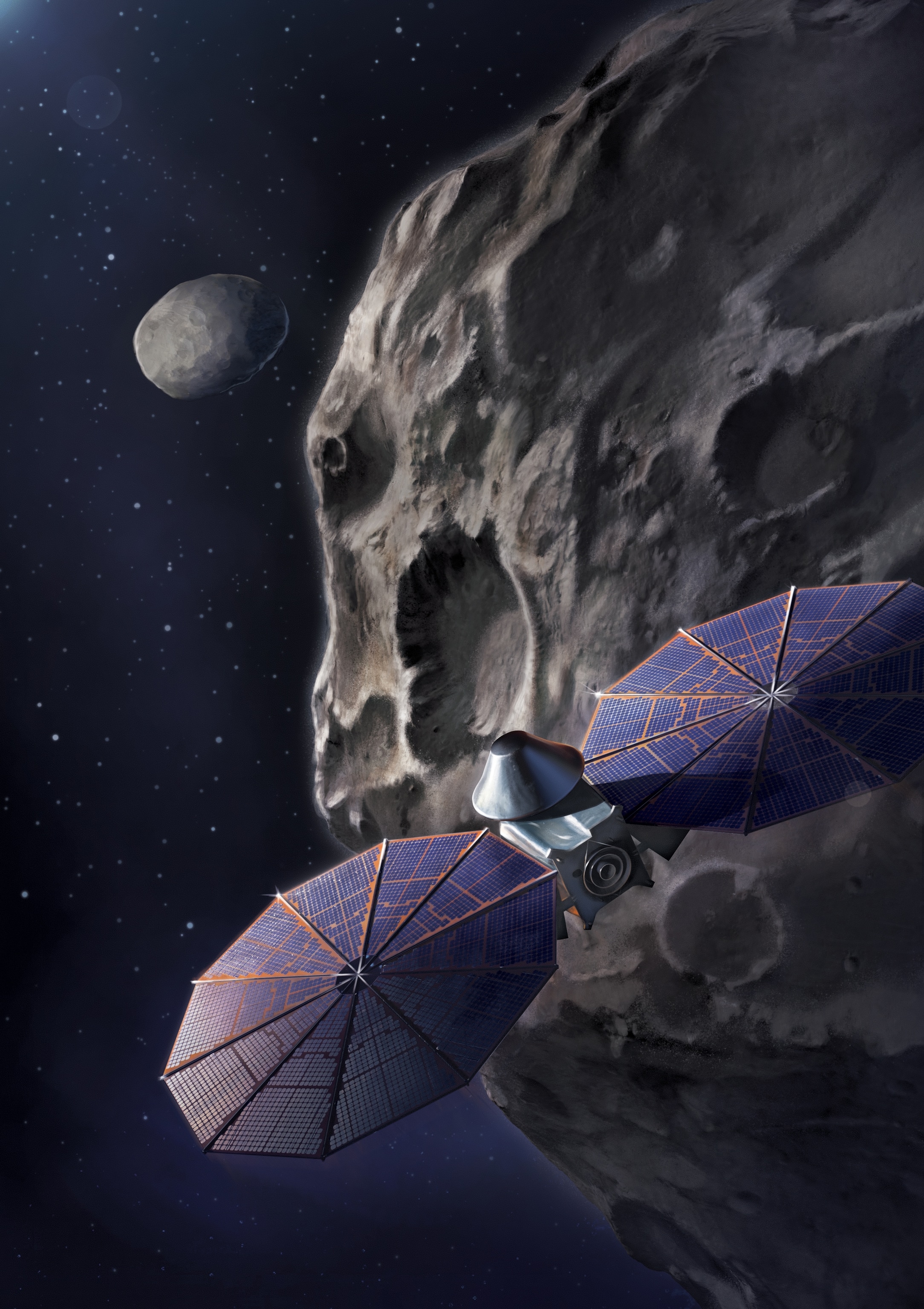 The spacecraft will explore a group of asteroids that share Jupiter’s orbit and have never been seen up close before.

NASA's 12-year Lucy mission will explore seven asteroids near Jupiter, including the binary system Patroclus and Menoetius, providing humankind with its first glimpses of the enigmatic Jupiter Trojans.
Monica Serrano and Ronald Paniagua

Beyond the main asteroid belt, alongside the gargantuan planet Jupiter, hundreds of thousands of unexplored worlds, each smaller than 140 miles across, hold precious secrets of our solar system’s birth.

A new NASA mission called Lucy launched October 16 from Cape Canaveral, Florida, to embark on a voyage to study these asteroids, known as the Jupiter Trojans. During the 12-year, four-billion mile journey, Lucy will periodically dip into two swarms of asteroids that lead and trail Jupiter as it orbits the sun, flying by a total of seven Trojans—as well as a bonus eighth asteroid in the main belt, between Mars and Jupiter.

“Lucy will explore a region in our solar system never explored before,” Adriana Ocampo, the Lucy program executive at NASA headquarters in Washington, D.C., said in an October 14 press briefing.

The Jupiter Trojans have not been seen in any more detail than merely points of light in the night sky; Lucy will fly within 600 miles of them. Along the way, the mission will set the record for most asteroids visited by a single spacecraft.

Lucy will reach its first target, the main-belt asteroid, in 2025, and then it will set off for the Trojans, which it will explore in a series of flybys from 2027 to 2033. Data from the spacecraft, detailing the asteroids’ color, composition, density, and craters, should help researchers figure out when and where each formed within the solar system.

The mission—only the tenth to ever venture as far as Jupiter—will also inform simulations of the early solar system, helping reveal how our neighborhood around the sun came to be.

Fittingly, “Lucy” was inspired by the famous fossil of the same name, a 3.2-million-year old skeleton of an ancestral cousin to modern humans. In a sense, the Jupiter Trojans play the same role those iconic bones did: preserving vestiges of the distant past that scientists can use to make sense of our present.

“These things really are the fossils of what planets formed from,” Hal Levison, Lucy’s principal investigator and a researcher at the Southwest Research Institute in Boulder, Colorado, said in an October 13 press conference. “If you want to understand where the solar system came from, you have to go to these small bodies.”

A flight for the ages

Lucy’s mission relies on a complex trajectory that places the spacecraft in a six-year orbit around the sun. After a series of Earth flybys to use our planet’s gravity for extra oomph, Lucy will fly past the main-belt asteroid 52246 Donaldjohanson—a 2.5-mile-wide world named for the paleoanthropologist who discovered the Lucy fossil.

The spacecraft will then pass through the leading Trojan swarm in 2027, flying by five Trojans in a single go. On the next pass, in 2033, it will dip into the trailing swarm, where it will whiz past Patroclus and Menoetius, a binary asteroid system.

The intricate path that Lucy will thread through the solar system was painstakingly mapped by Lockheed Martin’s Brian Sutter, the spacecraft’s mission architect. “Brian’s part is not just science—he is an artist,” Levison says.

Though the Jupiter Trojans occupy two fairly narrow swaths of the solar system, they’re extremely diverse in color, size, and certain aspects of their orbits, ranging from gray to a deep, muted red, and they vary from less than six-tenths of a mile wide to about 70 miles across.

Some of these asteroids resemble other kinds of small bodies strewn throughout the solar system. The grayish Eurybates, for instance, looks like the asteroids found orbiting in the main belt just beyond Mars. The slow-dancing pair of Patroclus and Menoetius, by contrast, looks a lot like binary systems in the Kuiper belt, a region beyond Neptune’s orbit.

“We’ve designed our mission to investigate the diversity of objects in this population,” Lucy deputy principal investigator Cathy Olkin, also of the Southwest Research Institute, said in an October 12 press briefing.

Lucy’s team had to build a spacecraft that could pull off the four-billion-mile trip. At its farthest, Lucy will get more than half a billion miles from the sun, where sunlight is only a few percent of what we get on Earth. So Lucy needs massive solar panels: The spacecraft’s twin solar arrays carry nearly 8,000 individual solar cells, spread out across an area as big as three and a half parking spaces. At the Trojans’ distances, these huge arrays will only generate about 500 watts of power—less than the average microwave uses.

During the flybys, Lucy will come within 600 miles of its target asteroids at velocities of nearly 15,000 miles an hour, requiring its instruments to be mounted on an extremely precise gimbal. During Lucy’s closest approach of each target, its highest-resolution camera, called L’LORRI, will be able to pick up surface features as small as 24 feet across.

“The kind of data that you can get up close, both for the geology and the composition, is not something that you can replicate from just seeing them as a point of light,” says Andy Rivkin, a small-bodies expert at the Johns Hopkins University Applied Physics Laboratory.

Astronomers estimate that several hundred thousand Jupiter Trojans orbit alongside the gas giant. Since 1906, when the first Jupiter Trojan was found, astronomers have located nearly 11,000 of these objects. More than half of them have been discovered since 2010, thanks to steady improvements to telescope surveys that sweep the night skies.

Following a hunch that there might be a missing planet in between Mars and Jupiter, early 19th-century astronomers serendipitously discovered the first asteroids. Today, spacecraft missions provide scientists a closer look at these important building blocks of our solar system.

The asteroids were named for warriors who fought in the Trojan War: Greek heroes for the asteroid swarm leading Jupiter, and Trojan heroes for the trailing swarm. As astronomers brace for hundreds of thousands more Trojans to be discovered in the next decade, The Iliad’s well of names is finally running dry.

For decades, these asteroids were considered mere leftovers from the formation of Jupiter’s largest moons. But in the last 25 years, scientists have realized that the Jupiter Trojans could provide major clues to our solar system’s chaotic youth.

Astronomers know from telescopes on Earth that the Jupiter Trojans come in a variety of colors, which suggests they’re not all made of the same materials. Yet somehow this melange of small bodies ended up settling into extremely stable—and hard-to-enter—orbits alongside Jupiter.

“Since they share the same orbit of Jupiter, they are kind of like witnesses to everything that’s happened with Jupiter,” says Simona Pirani, a postdoctoral researcher at the University of Copenhagen who studies the solar system’s early formation. And untangling the history of Jupiter, the largest planet, is crucial to the story of the whole system.

In 2005 Levison and his colleagues at the Côte d’Azur Observatory in Nice, France, published an influential hypothesis—now called the Nice model—that proposed an era of chaos in the solar system’s youth.

In the Nice model and other scenarios like it, the solar system began with many more small bodies than it has now, and Jupiter, Saturn, Uranus, and Neptune migrated inward as they first formed. After they grew to large planets, the gas giants’ gravitational dances with tiny “planetesimals” shifted their orbits bit by bit, until they slipped into an unstable configuration.

Suddenly, the giant planets are thought to have spiraled outward to their current positions, scattering many small bodies out of the solar system and jumbling up some of those that remained. Some theories even suggest that a fifth gas giant may have been ejected from the solar system around this time, adding to the chaos.

Jupiter may have captured its Trojan asteroids during all the hullabaloo, many of which likely formed beyond Neptune. In the years since the Nice model was first published, theorists have updated it to try and explain even more of the Trojans’ unusual features. Others have tested whether some of the Jupiter Trojans could have been captured even earlier in the solar system’s formation, possibly even when an infant Jupiter was only the size of Earth.

But to test these theories about the formation and evolution of the solar system, scientists need to visit the Jupiter Trojans up close.

“I’m looking forward to finding something that I never expected,” Levison says. “There’s no doubt!”

This story has been updated to reflect the successful launch of NASA's Lucy spacecraft.