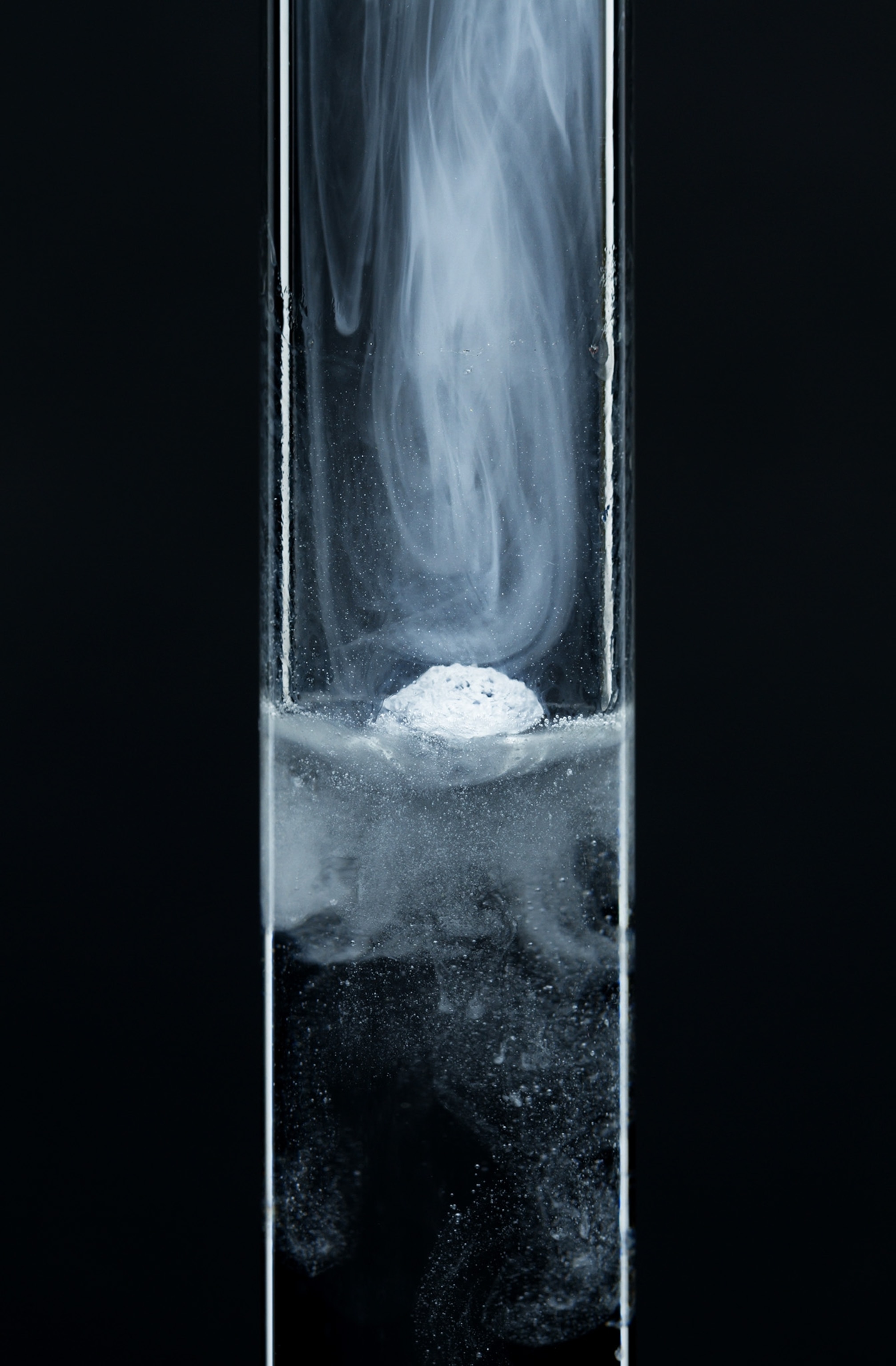 Confirmed: New phase of matter is solid and liquid at the same time

The mind-bending material would be like a sponge made of water that's leaking water.

As a small particle of potassium metal is dropped into a test tube of water, it moves around vigorously—melts, fizzes, and even jumps, changing into bubbles of hydrogen gas and potassium hydroxide. Under the right pressure and temperature, the metal can become a solid and a liquid at the same time, scientists have confirmed. “It’s kind of strange,” says study coauthor Andreas Hermann of the University of Edinburgh.
Photograph by Turtle Rock Scientific/Science Source

Solid, liquid, gas … and something else? While most of us learn about just three states of matter in elementary school, physicists have discovered several exotic varieties that can exist under extreme temperature and pressure conditions.

Now, a team has used a type of artificial intelligence to confirm the existence of a bizarre new state of matter, one in which potassium atoms exhibit properties of both a solid and a liquid at the same time. If you were somehow able to pull out a chunk of such material, it would probably look like a solid block leaking molten potassium that eventually all dissolved away.

“It would be like holding a sponge filled with water that starts dripping out, except the sponge is also made of water,” says study coauthor Andreas Hermann, a condensed matter physicist at the University of Edinburgh whose team describes the work this week in the Proceedings of the National Academy of Science.

The unusual state of potassium could exist under conditions found in Earth’s mantle, but the element is generally not found in a pure form and is usually bound up with other material. Similar simulations could help study the behaviors of other minerals in such extreme environments.

Earth is the only planet known to maintain life. Find out the origins of our home planet and some of the key ingredients that help make this blue speck in space a unique global ecosystem.

Metals like potassium are fairly straightforward on a microscopic level. When shaped into a solid bar, the element’s atoms link up into orderly rows that conduct heat and electricity well. For a long time, researchers believed that they could easily predict what might occur to such crystalline structures under pressure.

But around 15 years ago, scientists discovered that sodium—a metal with similar properties to potassium—did something strange when compressed. At 20,000 times the pressure present at the Earth’s surface, sodium transformed from a silvery block into a transparent material, one that did not conduct electricity but rather prevented its flow. By probing the sodium with x-rays, scientists could see that its atoms had adopted a complex crystal formation instead of a simple one.

Potassium, too, has been subjected to much experimental scrutiny. When compressed to similar extremes, its atoms arrange themselves into an elaborate formation—five cylindrical tubes organized into an X shape, with four long chains sitting in the crooks of this assembly, almost like two separate and non-intertwining materials.

“Somehow, these potassium atoms decide to divide up into two loosely linked sub-lattices,” Hermann says. But as scientists turned up the heat, x-ray images showed the four chains disappearing, and researchers argued about what exactly was happening.

Hermann and his colleagues turned to simulations to find out, using what’s known as a neural network—an artificial intelligence machine that learns how to predict behavior based on prior examples. After being trained on small groups of potassium atoms, the neural network learned quantum mechanics well enough to simulate collections containing tens of thousands of atoms.

The computer models confirmed that between about 20,000 and 40,000 times atmospheric pressure and 400 to 800 Kelvin (260 to 980 degrees Fahrenheit), the potassium entered what’s called a chain-melted state, in which the chains dissolved into liquid while the remaining potassium crystals stayed solid.

This is the first time scientists have shown that such a state is thermodynamically stable for any element.

The machine learning technique that the team developed could be useful in modeling the behavior of other substances, says Marius Millot, who studies material under extreme conditions at the Lawrence Livermore National Laboratory.

“Most of the matter in the universe is at high pressure and temperature, for instance inside planets and stars,” he adds.

Exoplanets challenge the notion that we are alone in the universe. Learn what types of exoplanets exist, the methods scientists employ to find them, and how many worlds might exist in the Milky Way Galaxy.
Producer / Narrator: Angeli Gabriel Editor: Dan Steinmetz Associate Producer: Marielena Planas Research Manager: Mark Levenstein Sound Recordist: Jay Olszewski

Now that the chain-melt phase of potassium is confirmed, it joins the known array of other unusual states of matter beyond gas, liquid, and solid.

Plasma: A superheated form of gas in which atomic nuclei are separated from their electrons, meaning they can generate and be affected by electric and magnetic fields.

Bose-Einstein condensate: Only formed at temperatures close to absolute zero, all the atoms in this material begin to act as a single particle.

Superconductor: A state achieved when certain metals are cooled to low temperatures, and electricity can move through them with no resistance.

Superfluid: A liquid cooled to near absolute zero, so that it can flow without friction, even climbing up the sides of a container and dripping down the outside.

Quark-gluon plasma: A state in which protons and neutrons dissolve into their constituent quarks, which can move freely among particles called gluons that carry the strong force.