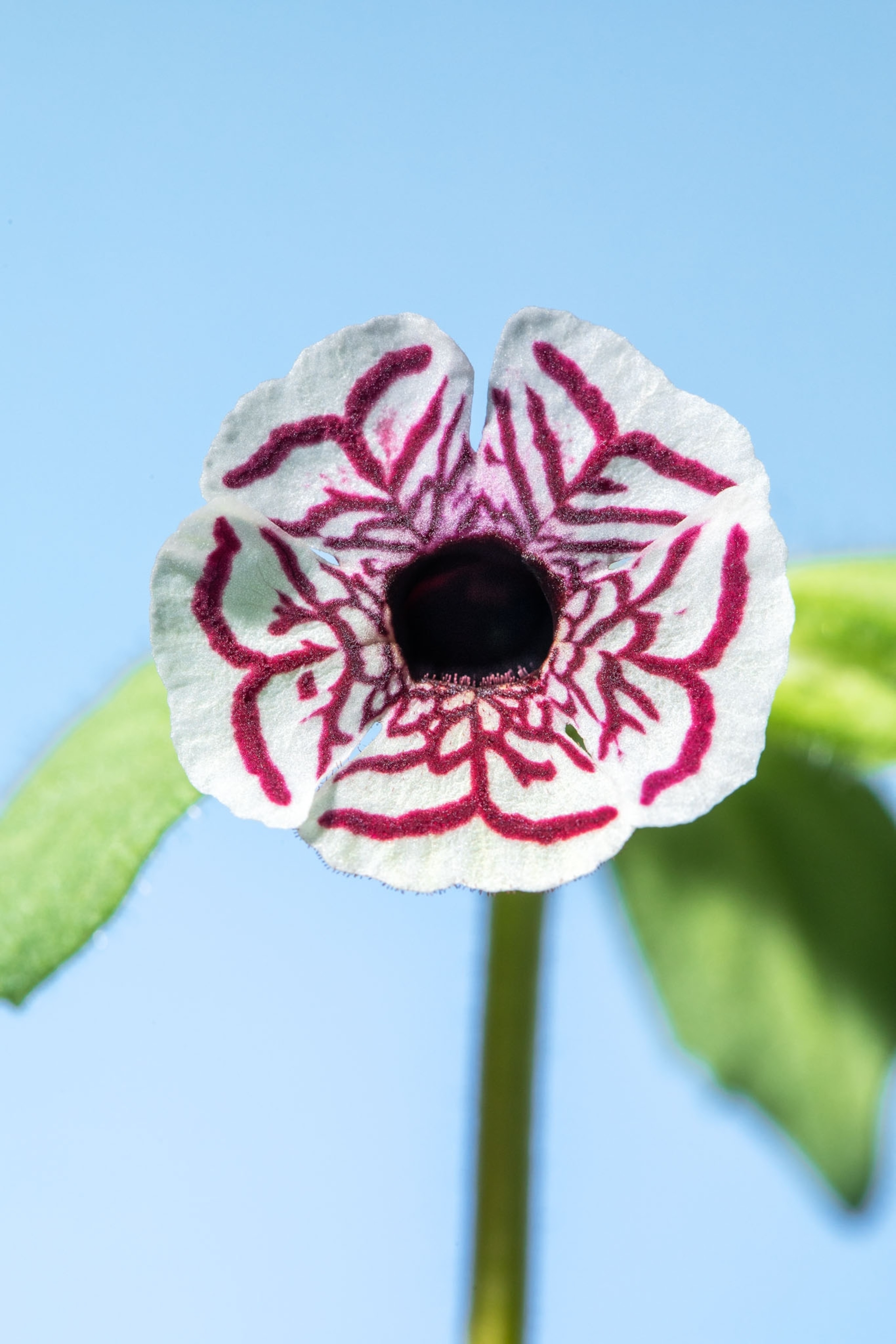 A model developed by Alan Turing can help explain the spots on these astoundingly diverse flowers—and many other natural patterns as well.

The monkeyflower species Mimulus pictus, with a unique pattern displayed on the petals.

Scientists who study monkeyflowers sometimes feel as though the plants are looking back at them. The blooms are said to resemble the faces of playful monkeys—hence the name—complete with a speckled central region that looks like a gaping mouth, helping bees zero in on their nectar-rich targets.

“It's like a friendly smile indicating safe harbor for pollinators,” says Benjamin Blackman, a plant biologist at the University of California, Berkeley. By attracting these pollinating insects, the speckled petals help ensure the plants will go on to bloom another day.

To Yuan, who’s devoted the past decade of his life to studying monkeyflowers, these spotted petals aren’t just eye candy for insects. They’re a botanical example of patterns found across the tree of life. From the evenly spaced striations of seashells to the stripes that adorn zebra flanks, all of these patterns may be created from some of the same evolutionary building blocks.

In a recent study, Yuan and his colleagues showed that the dots that dapple monkeyflower petals are the result of a war between just two genes. Tussling over control of each plant cell’s pigments, these genes can seed wild amounts of diversity within even a single species—a find that may validate a decades-old theory first cooked up by British mathematician Alan Turing, who proposed a common template for many of nature’s most enigmatic designs.

“Pigmentation patterns are complex and ubiquitous in the natural world,” says Blackman, a co-author of the new research. “This study tells us that a relatively simple system can give rise to this complexity.”

Nature is full of patterns—visible traits that serve various biological functions, from attracting mates to warning predators to identifying members of the same species. Researchers have long understood that these patterns follow predictable mathematical models. In the 1950s, Turing proposed a “reaction-diffusion” model to explain many of the patterns in the biological world, wherein chemicals with opposite effects work against each other in the same organism.

Organisms appear to use the same molecular building blocks to generate life’s visual motifs, but the genetic workings of these colorful arrangements have proven difficult to pin down. The monkeyflower, however—a hardy and fast-growing plant of the genus Mimulus, with a relatively simple genome—is the perfect organism to study the patterns of nature, says Irene Martinez, a Mimulus researcher at Binghamton University.

Monkeyflowers come in a mind-boggling array of colors, shapes, and patterns, even within a single species. In recent years, hundreds of scientists have cultivated the plants in their greenhouses, eager to uncover the genetic source of their diversity and the role of variation in the species’ survival. The flowers are also excellent proxies for other species that are harder to wrangle in the lab—such as leopards with their rosette-spotted fur.

“Mimulus is a very powerful, testable system,” says Arielle Cooley, a monkeyflower biologist at Whitman College who wasn’t involved in the new study.

Yuan took advantage of the plant’s flexibility to generate a whole slew of Mimulus lewisii genetic mutants in his laboratory. Some of them lost their typical dappled patterning, instead displaying a uniformly crimson splotch resembling a tongue, hanging over a backdrop of yellow and pink.

By chance, Blackman and his laboratory—stationed in California, at the opposite end of the country from Yuan in Connecticut—converged on a similar idea after finding, in the wild, some red-tongued mutants of the closely related species Mimulus guttatus. Blackman and Yuan decided to team up to search for the genetic drivers of the flowers’ lavish displays.

Leveraging powerful genetic editing tools such as CRISPR, Yuan and Blackman’s teams analyzed the red-tongued mutant monkeyflowers and re-engineered them in the lab. They tracked down two genes responsible for the speckled pattern of red spots that monkeyflower tongues typically display in the wild.

For a monkeyflower cell to turn red, it must churn out gobs of a pigment called anthocyanin—a process switched on by a gene that generates an “activator” molecule. These activators prompt the flower to make more activators, spurring pigmentation onward. If this process goes unchecked, the entire tongue of the flower will turn red.

“It basically looks like the plant is sassing you,” Blackman says of the red-tongued mutants.

To keep themselves in check, the activator molecules also trigger the production of a “repressor”—another molecule that can leak into adjacent cells and shut off their activators, preventing coloration. Farther out from the first cell, the repressor becomes less abundant, allowing activators in distant cells to flip the pigmentation switch on again, and new spots of color form on the flower petal.

Driven by battling microscopic molecules, the genetic workings behind monkeyflowers’ spots are a perfect example of the reaction-diffusion model proposed by Alan Turing more than half a century ago.

Just two genes are enough to make this deceptively simple system work, and both are crucial to producing pigmentation patterns. If the activator molecule in Mimulus mutates, it can result in bland, spot-free plants; if the repressor molecule mutates, that can yield flowers with an oversaturated red blemish. Either is bad news for the plant, discombobulating the bumblebees that would otherwise land to slurp up the flower’s nectar and pollinate it in the process.

Yuan, Blackman, and Cooley all think reaction-diffusion plays at least a partial role in determining every visual pattern that repeats itself in nature. “If you look at a vine that pops out flowers at intervals, or stripes repeated across the body, those are really good candidates,” Cooley says. With the team’s monkeyflower findings in hand, solving some of these other living equations looks more possible than ever before.

With models that simulate the colorful clash between activator and repressor, Yuan and Blackman can reproduce the freckles of Mimulus plants. But there’s almost certainly more to the story. “It’s a simple model,” Yuan says. “But if I’ve learned anything in biology, it’s that … in a real biological system, it’s never going to be as simple as that. The details will always be different.”

Monkeyflower spots appear only on certain parts of the petal, for example, strictly avoiding others. By studying these speckle-free zones, Cooley and her team are homing in on another system that restricts the spots to specific regions.

“There is a long history of looking at a phenomenon and thinking: That seems so crazy and amazing, there is nothing to explain it,” Cooley says. “But as we work on it more, we find there are underlying principles.”