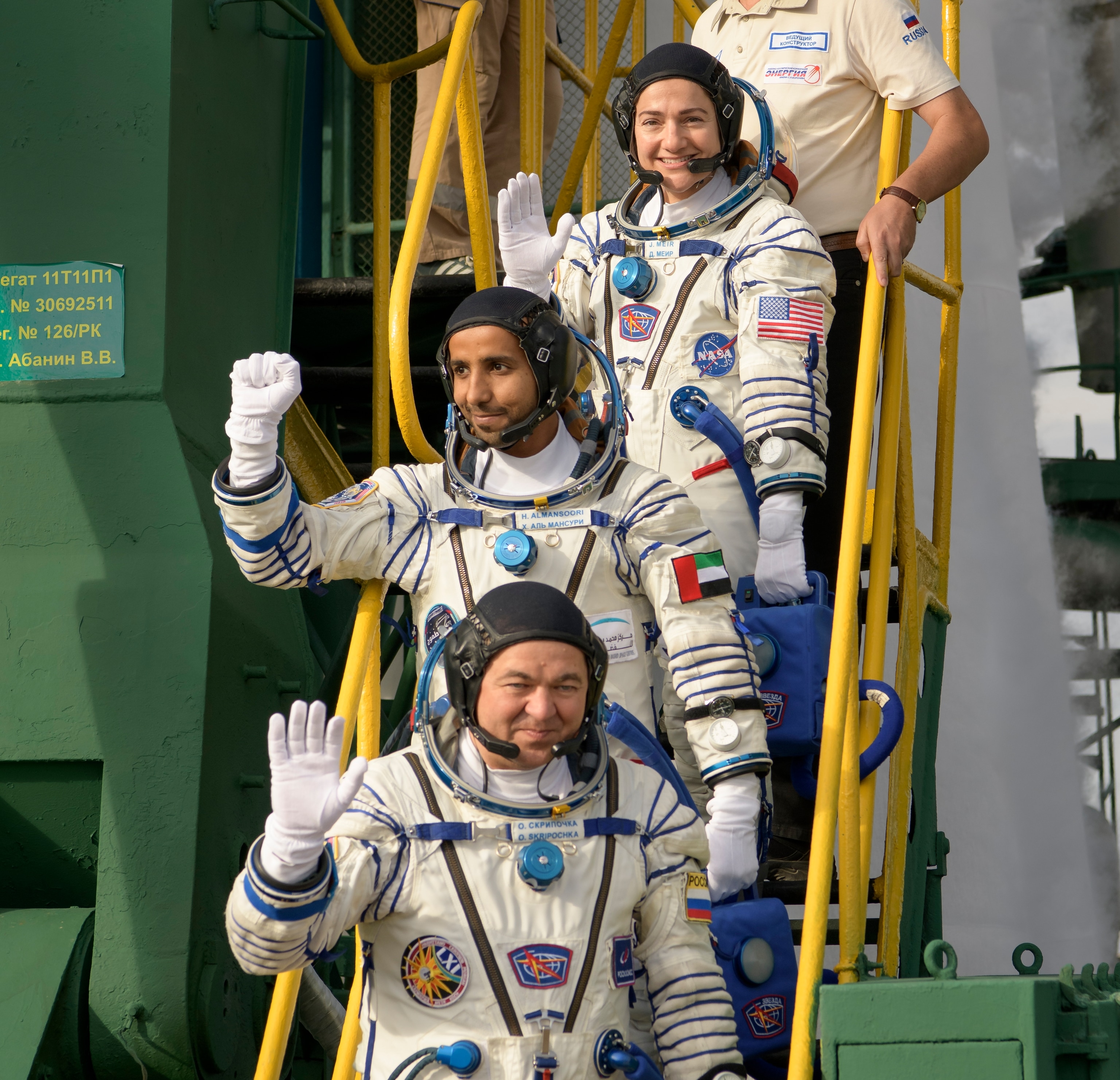 Astronaut Hazaa AlMansoori with his fellow crew members wave to the cameras before blast-off.
Photograph courtesy Mohammed Bin Rashid Space Centre
This is Paid Content. The editorial staff of National Geographic was not involved in the preparation or production of this content.

As sure as the stars in their courses, astronaut Hazzaa AlMansoori is adamant about one thing: he’s going back into space.

Whether it’s a return to the International Space Station, where he proudly represented the UAE as a vital member of the orbital colony’s international team, or to the Moon or on to Mars, the 36-year-old father of four has the space bug.

“One of the biggest objectives of this program is to be sustainable and to focus on science - that's what the leadership wanted,” says AlMansoori, who blasted off from the Baikonur Cosmodrome in Kazakhstan aboard a Soyuz MS-15 spacecraft on September 25 last year, and touched down safely on October 3.

“The future is bright for our program and as long as I have the health and the time, I will be focusing on supporting the future missions by participating myself or supporting our fellow astronauts.”

To that end, AlMansoori and the scientists and engineers at the Mohammed Bin Rashid Space Centre (MBRSC) will be focusing on all they have learned from the ISS mission, including the priceless trove of medical and genetic data gained from his sojourn.

“Going to space and stopping is not an achievement,” the veteran UAE Air Force F-16 pilot says.

“The achievement is to have mission two and three and four and so on. The MBRSC missions will continue - that is a must, and I will do whatever I can to support this program to move forward.”

The astronaut says that now the UAE is firmly on the map as a spacefaring nation the sky is no longer the limit.

“The biggest lesson I've learnt personally is to believe in your ambitions. Nothing is impossible and that's the message that our leadership is focusing on,” he says.

“One year back people would have felt uncomfortable saying they want to be an astronaut because no one would believe in that.

“We had no program, and no previous missions. So now with no hesitation you can say you want to go to the Moon or reach Mars and in the future that's not impossible.”

AlMansoori was one of two people whittled down from 4022 candidates when, in September 2018, Sheikh Mohammed announced AlMansoori and Sultan AlNeyadi would “represent all young Arabs and represent the pinnacle of the UAE's ambitions”.

In April last year it was announced that AlMansoori would be the one strapped into the nosecone of the venerable Soyuz. AlNeyadi would be the backup and train with a different crew.

As part of the agreement between MBRSC and Russian space agency Roscosmos to train Emirati astronauts, the pair went through training at Yuri Gagarin Cosmonaut Training Centre in Star City, Russia.

The highlight of the journey for AlMansoori was the launch of the Soyuz.

“It was a mixture of emotions – happiness, joy, fear. I mean the whole training period, the whole one year we spent training going through the difficulties learning Russian, a lot of challenges whether it's physical or mental - everything was summarised in that moment when the rocket went up,” he says.

“It was like a controlled explosion - there’s no other way to explain it. And then there was the lift-off. That moment was the biggest moment for me and everybody started cheering - all of them were happy and yes, I was happy.

AlMansoori says getting around in microgravity is a challenge.

“You cannot move like the astronauts who have been on board for a couple of months,” he says.

“You have to know where to grab and you have to learn how to move.

“Sometimes you're just stuck in the middle slowly rotating – and you cannot use your hands to ‘swim’ forward by moving the air when you’re in space. I know - I tried it.”

"I wanted to cry"

Aside from looking at the Earth, which was a constant wonder AlMansoori says one highlight was an Emirati night when he prepared the food for the nine astronauts and cosmonauts aboard the station and dined with them while he wore traditional Arab dress.

He says his return to his homeland - after a week’s in Star City for medical tests and rehabilitation from the effects of microgravity - was “magical”.

“It was magical. I can't describe in a few words - seeing the leadership, all the families and ministers, my kids seeing me, holding the mission patch – it was really exciting.

“It was an emotional moment for me. I wanted to cry at that point but I had to look like a hero. I just hugged everybody. I will not forget that I achieved the goal for our nation - the first astronaut from my country to open up space so: mission accomplished.”

Both AlMansoori and AlNeyadi say their mission on Earth continues, for the moment that mission is to inspire the next generation of Emirati astronauts, to go to the Moon, Mars and beyond.