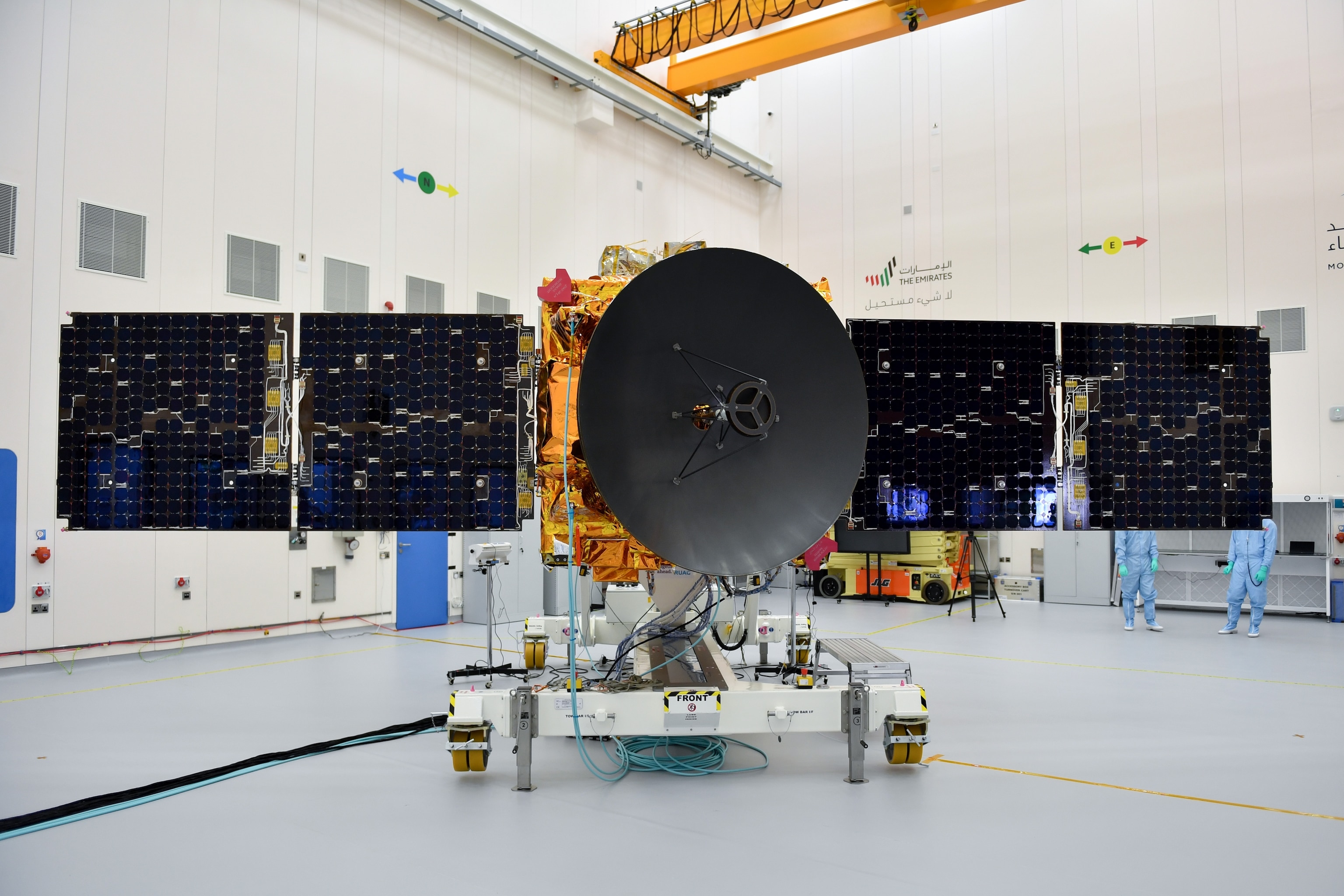 Red Planet probe, a symbol of independence, hope and peace

The first Emirati Mars probe will mark the nation’s 50th birthday and provides a promise of the region’s future.

UAE’s Hope probe will be the first to take a detailed look at the Martian atmosphere.
Photograph courtesy Mohammed Bin Rashid Space Centre
This is Paid Content. The editorial staff of National Geographic was not involved in the preparation or production of this content.

The birth of the United Arab Emirates is linked inextricably and forever to the Red Planet.

For it was on the UAE’s first Independence Day, December 2, 1971, that the probe Mars 3 landed successfully and began signalling from the planet’s surface –the first artefact fashioned by humans to ever make a soft landing on the planet.

And in 2021 – 50 years after the birth of the Gulf nation - the first Emirati spaceship will fire its retros and enter Mars’ orbit – the culmination of seven years’ hard work and a celebration of Arab ingenuity and achievement.

For the head of the UAE Mars mission Omran Sharaf, the achievement is summed up in the name of the craft – Al-Amal – the Arabic word for Hope.

Hope’s two-year mission: to seek out the reasons for the loss of oxygen and hydrogen from the gaseous envelope that surrounds the fourth planet from the Sun – a question that should be close to the hearts of people who live on nearby Earth.

Equipped with a science package of three sophisticated sensors, Hope will be the first probe to take a detailed look at the Martian atmosphere including investigating how the lower and upper levels of the planet’s atmosphere are connected, and form a complete picture of how the it varies during the day and over the seasons.

Previous visiting spacecraft have only provided a brief snapshot of Mars’ atmosphere – Hope will be the first to give scientists a holistic view of the Martian climate every day of the year, month in and month out, right through the planet’s complete 24-month orbit around the Sun.

The mission parameters were breathtakingly ambitious and presented a seemingly impossible timeline for the UAE’s scientists and engineers – for once the phrase is not used ironically.

Matters were further complicated by the fact that a launch window for a journey to Mars only occurs every two years.

There was – and is – the potential for many things to go wrong.

Then there is the journey itself. The craft could lose its way, and then either crash into Mars or miss the planet entirely – more than 50 per cent of Mars missions mounted by all nations have failed.

The successful launch came less than six months after the UAE’s first astronaut returned to Earth, with Hazzaa AlMansoori, making landfall on the Kazakhstan steppe after an eight-day science mission on board the International Space Station.

AlMansoori is now part of the UAE’s cadre of veterans, engineers and technicians who will in the future lead the nation’s spacefaring efforts.

Sharaf, one of the first engineers to join the core team members at the inception of the Mohammed bin Rashid Space Centre has himself worked his way up through the ranks of the UAE’s burgeoning space program, and hopes this mission will inspire younger Emiratis to follow his career trajectory.

“This mission will be a catalyst, and a driver for change in different sectors: from educational to space to industrial.

“Mars is not the end goal. As His Highness says, this mission is about creating an innovative and competitive knowledge-based economy.

“It's about the future of the UAE and addressing new and international challenges, including energy, food and water security.”

Long-term, Sharaf says, the UAE’s goal is to begin putting humans in space, which will also help solve challenges on Earth.

He says that space is a proven and perfect crucible to test humankind’s mettle.

“One thing about space - it inspires people, it pushes us out of our comfort zone and that set of challenges are the kind of challenges we need.”

Sharaf says that in addition to putting the UAE on the map as a major player in space – Hope’s was the first ever countdown in Arabic – the craft’s findings will benefit future missions, and assist scientists to better understand Mars’ potential for human visitors and ultimately, human settlement.

In February, shortly before the 530kg, 2.9 metre probe reaches Mars after its 200-day, 500-million-kilometre voyage it will need to slow down from its headlong 121,000km/h rush in order to go into its parking orbit.

To do this, Hope will fire up its six on-board hydrazine thrusters and point their angry red glare towards the planet the Romans named after their god of war. Except, for the Emirati people who launched the trailblazing probe to the stars, the spacecraft will be a shining beacon of peace – and hope.

The UAE has sent a probe to the Red Planet, blasted its first astronaut into space and the next stellar challenge – a Lunar rover.

Astronaut’s ticket to the moon is her engineering degree

UAE’s next generation of space explorers are living the dream.

The young desert nation’s first missions to space are part of its roadmap to the stars.