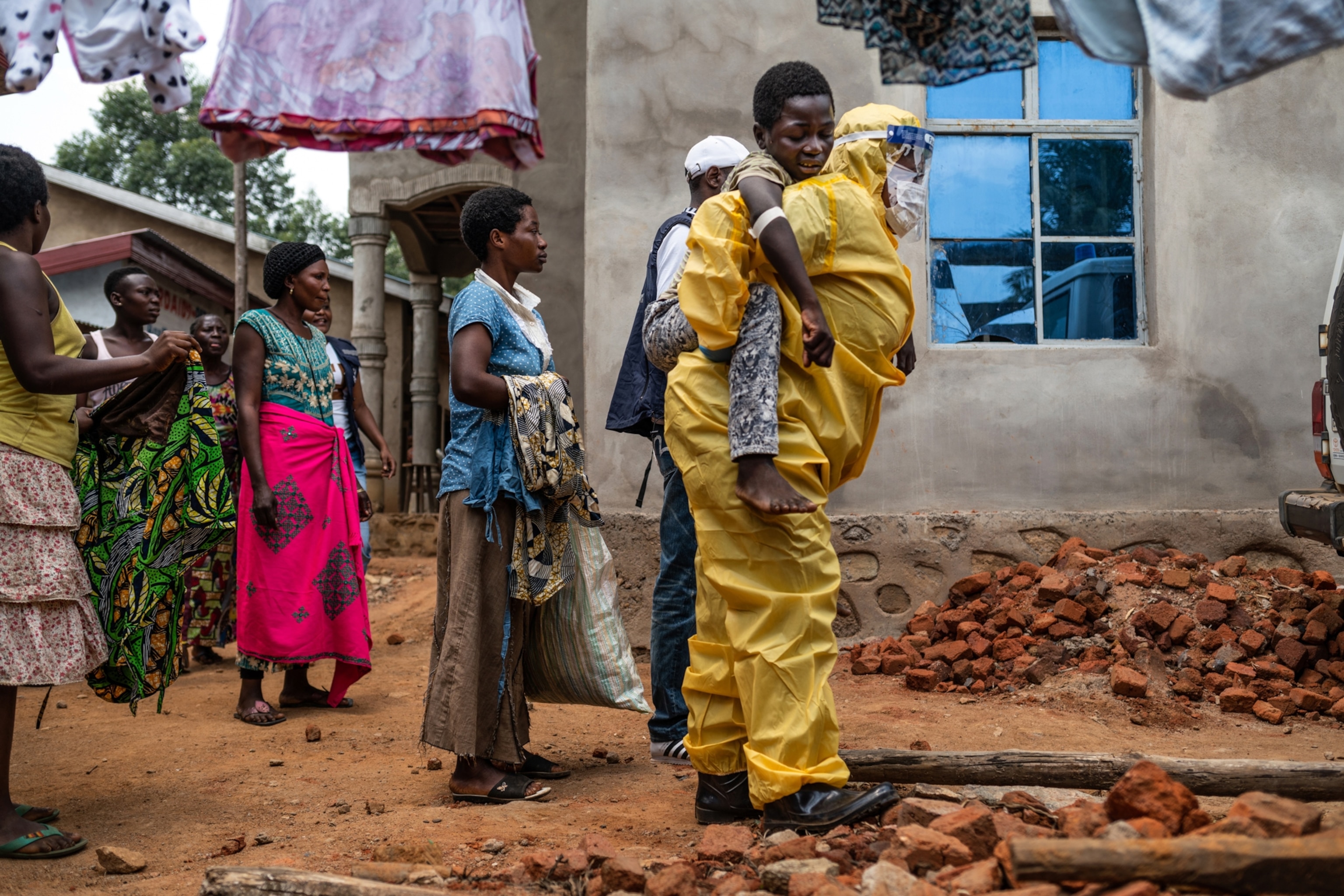 The second largest Ebola outbreak in history may finally be over

For almost two years, the Democratic Republic of Congo has been struggling to suppress the deadly virus. Now, this outbreak appears to have been defeated.

A health worker carries Kakule Kavendivwa, 14, to a waiting ambulance in Beni last year. The day before Kakule's sisters had taken him to a nearby health center, but fled when the team encouraged them to go to a treatment center. The health center alerted the World Health Organization who found the family. After several hours of talking with community outreach workers, they allowed an ambulance to take him for treatment.
Photograph by Nichole Sobecki
Editor’s Note: The World Health Organization declared the North Kivu Ebola outbreak in the Democratic Republic of the Congo—the second largest on record—to be over on June 25, following reports of a new case in April. Another outbreak was declared in early June when a cluster of cases cropped up in the country’s Équateur Province, but the WHO declared that outbreak over on November 18.

While the world has been gripped by the ongoing coronavirus pandemic, the second-largest Ebola outbreak in history finally may be winding to a close.

The Democratic Republic of the Congo (DRC) reported the first cases in what came to be known as the Kivu outbreak in August 2018. So far, the event has led to about 3,453 cases and 2,273 deaths. But no new Ebola cases have been reported in the DRC since February 17, and if that situation holds, the World Health Organization plans to declare the end of the outbreak on April 12.

Like the new coronavirus, Ebola is a zoonotic virus, which means it can pass from animals to people. However, Ebola is a very different disease that attacks various organs, causing a severe hemorrhagic fever, whereas the coronavirus primarily targets the lungs. Also, people spread Ebola once they start showing symptoms, while the new coronavirus can be transmitted even when people are feeling well.

The largest Ebola epidemic was in West Africa from 2014 to 2016. Back then, the disease emerged in a border region that had no experience with the virus, and Ebola carved a destructive path across several countries, killing more than 11,000 people. By contrast, the Kivu outbreak has been confined mostly to the DRC. However, local unrest driven by long-simmering political and social tensions helped fuel its spread and hampered early efforts to contain it.

The eventual containment of Ebola in the northeastern DRC reflected the value of an intensified vaccination campaign with an increased focus on community engagement aimed at easing suspicions about the efforts of government, international organizations, and health-care workers who were trying to end the spread of the virus.

Crucial to their efforts was the availability of a new vaccine, first tested during the West African Ebola outbreak in 2016. More than 300,000 people have received the vaccine since the Kivu outbreak began, marking the largest deployment ever of preventive medicine for Ebola. For now, researchers are still working on a vaccine for the new coronavirus, and odds are any preliminary versions won’t be widely available for at least a year.

“If we wouldn’t have had that, it would have been much worse,” says Thibaut Jombart, an epidemiologist who worked in the DRC for six months to analyze the outbreak in real time and provide advice to health-care workers on the ground.

When international organizations arrived in the eastern DRC in 2018, they already faced suspicions from the local population, caused by a long history of conflict in the region. The distrust only deepened when the government announced changes to that year’s general election.

The regions of Beni and Butembo were among the areas heavily affected by the Ebola outbreak. But, after a long history of violence and neglect, people there tend to be more critical of the government. In December 2018, government officials announced that those regions would have to wait until March 2019 to vote, even though polling would continue as planned on the last day of 2018 elsewhere in the DRC.

“Because of this, the population revolted,” says Mathias Mossoko, an epidemiologist for the DRC’s Ministry of Public Health. “They barricaded roads, which prevented us from following all the Ebola cases and bringing them to the treatment centers. So, they stayed in the community, where they contaminated others.”

The protests, combined with several attacks on health-care workers and treatment centers, caused Ebola transmission to spike. Violent incidents continued throughout the spring of 2019, as false rumors spread that the Ebola outbreak was fabricated and that health-care workers were experimenting on locals and stealing their organs. By April, Ebola cases were surging, with more than a hundred new patients reported on some days.

How Ebola was wrangled

Realizing drastic action was required, a group led by Michel Yao, the WHO incident manager for the Kivu outbreak, launched an intensified strategy. The team decided to respond to new cases much faster, ideally within 24 to 48 hours. It also agreed to track down and vaccinate anyone who had been in contact with each case, as well as the contacts of those contacts.

“In some small places with just a few hundred people, where everyone was a contact of a contact, we would just vaccinate everyone,” Mossoko says.

The strategy also aimed to improve community engagement, making the response on the ground seem less intimidating and invasive.

“We made a team of influencers who helped us convince people to accept the interventions of the response teams, to go to a treatment center if they had symptoms, and to have safe and dignified burials for those who died,” Mossoko says.

After the initiative was implemented on May 7, 2019, the number of cases around the treatment center in Butembo, one of the last and largest holdouts of the virus, finally started decreasing, Jombart says. His research shows that this was the beginning of the end for the outbreak. His team hopes the strategy’s effectiveness will motivate governments and health officials to implement similar tactics earlier during future outbreaks where violence is an issue, by focusing on building trust in the affected communities and vaccinating as soon and as widely as possible.

Mossoko believes the outbreak is very likely to be over, but he adds that “this does not in any way relieve our vigilance.” His team continues to reinforce disease surveillance activities across the region, in afflicted areas and places with no known cases, to try to prevent any chance of a surprise resurgence.

This vigilance is justified: An analysis published last year warned that if more than one in five cases went unreported during the outbreak, 42 days may not be enough to say with confidence that the epidemic is over. And right now, reliable data on the possible number of unreported cases are lacking. But given that all of the most recent cases came from known chains of transmission, Jombart also thinks the DRC’s latest Ebola nightmare may finally have come to an end.