A pristine American backcountry faces down an environmental crisis

Minnesota’s million-acre Boundary Waters Canoe Area has long been a wilderness haven. Can it be preserved?

Minnesota’s million-acre Boundary Waters Canoe Area has long been a wilderness haven. Can it be preserved?

With a million acres of woods and a thousand lakes, the Boundary Waters Canoe Area Wilderness in Minnesota’s Superior National Forest is one of America’s most iconic natural preserves.

Each year, the BWCAW attracts 155,000 visitors, with many reserving passes years in advance. The appeal? Going completely off grid to camp and canoe along wildlife-rich shores.

But the wilderness is now facing challenges that threaten to erode the reasons people come here in the first place. Long an existential threat, a controversial copper-nickel mine with the potential to cause irreparable environmental harm is poised to become a reality. The mine, coupled with pandemic crowds leaving a trail of damage, are raising concerns over the Boundary Waters’s future as a sanctuary for visitors and a vital economic engine for locals.

(Related: Avoid the crowds at these 10 least-visited national parks.)

Mining on the horizon

The BWCAW isn’t just a haven for nature lovers; it’s a trove of precious metals used to make a wide range of products, from electronics to roof gutters and aircraft engines. One of the richest loads—four billion tons of copper and nickel—is buried deep within the Duluth Complex, an ancient rock formation along Lake Superior that extends from the city of Duluth to the northeastern tip of Minnesota. It’s an area that Twin Metals, a subsidiary of Chilean mining giant Antofagasta, has spent years trying to tap via a proposed underground sulfide-ore copper mine.

If approved, the mine would be located a few miles from the southern edge of the Boundary Waters, not far from Ely, a town of 3,356 people filled with outfitters and key entry points to the wilderness. Another company, PolyMet, has secured permits to build a mine near Lake Superior, outside of the BWCAW watershed. But that project has stalled for now due to scrutiny over how regulators handled the process.

Opponents say that the type of mining Twin Metals wants to do results in heavy metal runoff that would cause irreparable damage to the BWCAW’s lakes and rivers. Led by Northeastern Minnesotans for Wilderness (NMW), the Campaign to Save the Boundary Waters has filed several lawsuits to stop the mine. 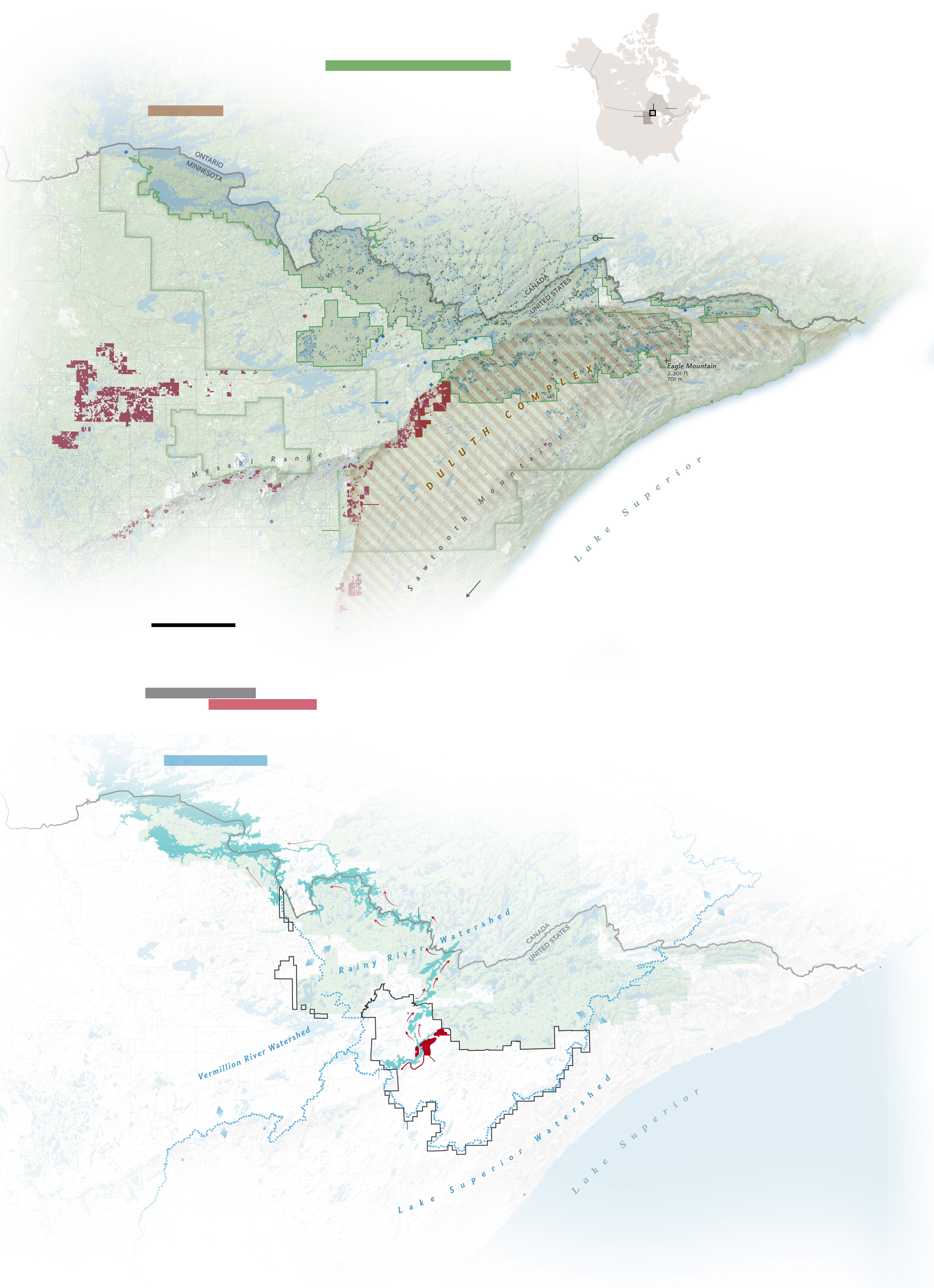 Important wilderness is under

is not only crucial habitat to countless endangered species, but also is a key driver

of the region’s economy—drawing 155,000 visitors each year and housing several

youth and family camps. However, the region sits on a geologic zone called the

Duluth Complex , a formation with a lot of mining potential.

The BWCAW and Quetico

In late 2017, the Trump administration reversed an Obama-era proposal to pro-

posed a large sulfide-ore copper mine in the area. Although the mines are not

directly in the wilderness area, they will almost certainly seep hazardous runoff

bedrock geology, making the spread of seepage hard to predict. Large areas of

the Rainy River Watershed , including waters on both sides of the border, would

be at risk of contamination if the mine were to be allowed to proceed.

is under threat of

Located in Northeastern Minnesota, the Boundary Waters Canoe Area Wilderness is not only crucial habitat to countless endangered species, but also is a key driver of the region’s economy—drawing 155,000 visitors each year and housing several youth and family camps.

The Boundary Waters is overlapped by a

a geological formation with a lot of

In late 2017, the Trump administration re-

from the Boundary Waters (the Withdrawal

Now a Chilean comapny, Antofagasta, has

proposed a large sulfide-ore copper mine

in the area. Although the mines are not

dirtectly in the wilderness area, they will

north from the mine into large areas of the

Rainy River Watershed, including waters on

both sides of the international border.

The area is “critical habitat” for endangered animals including the Canadian lynx, gray wolf, and moose, notes Marc Fink, a senior attorney at the Center for Biological Diversity, which is part of the coalition. “We definitely feel that the proposal for a copper mine outside the BWCAW is [the wilderness’s] biggest threat in a number of ways,” he adds.

(Related: A proposed copper mine in Alaska puts a pristine wilderness at risk.)

Before the Boundary Waters Canoe Area Wilderness Act was passed in 1978, the Bureau of Land Management issued two 20-year mineral leases with the option for three 10-year renewals related to the Rainy River Watershed, which houses the BWCAW. Twin Metals acquired those leases in 2012 and applied to renew them a few years later. But President Barack Obama rejected the application in 2016. That was reversed after President Donald Trump came into office. He granted the renewal in 2017, a move that’s part of his administration’s efforts to roll back a slew of environmental laws.

Twin Metals spokesperson Kathy Graul says the company’s proposal, which is currently under environmental review, includes advanced technologies like the dry stack method “to protect the environment and minimize the project’s impact.” The method removes most of the water content from waste rock pulled from the ground. The resulting sand-like “tailings” are then piled into a lined storage facility.

While some environmentalists say dry stack storing is safer than the traditional method of storing tailings in a pond with a dam, Friends of the Boundary Waters Wilderness, isn’t convinced. “This specific type of copper-nickel mining has never been done [here] before, so there are a lot of reasons why we oppose these mines,” says Pete Marshall, a spokesperson for the organization, which is a co-plaintiff with Save the Boundary Waters on two lawsuits against Twin Metals.

The town of Ely was built on mining, but residents today are split on the proposed mine, which would be Ely’s first in 50 years. Some say the potential environmental damage is too great a risk for tourism businesses. Others welcome additional jobs that wouldn’t depend on the seasons. Graul says Twin Metals “expects to directly employ more than 750 people long term in northeastern Minnesota and to create an estimated 1,500 spinoff jobs in other industries.”

But even if the project did create that many additional jobs, they would be short lived. A study by a Harvard economist determined that “the economic benefits of mining would be outweighed by the negative impact of mining on the recreational industry and on in-migration,” considering the boom-bust nature of mining jobs.

Though the Trump Administration’s decision to renew the leases is helping to push Twin Metals’ project along, the regulatory review process and lawsuits puts the mine several years out at best. In the meantime, opponents like Marshall continue to add hurdles with plans like “prove-it-first” legislation, modeled after a similar Wisconsin law that was repealed in 2017. This January, Minnesota Rep. Betty McCollum introduced H.R. 5598, which aims to permanently protect 234,328 acres within the Boundary Waters watershed from copper mining. The bill is currently in subcommittee, but Rebecca Rom, national chair of NMW, says she believes it will pass the House this year.

Although Marshall believes that organizations like his will succeed in stopping Twin Metals, he says it would be a temporary victory. “The challenge with any kind of environmental battle is that the copper is still going to be there. It will always be that valuable resource that will attract powerful companies and powerful interests,” he says. “We’ll have to be on guard indefinitely.”

The problem with popularity

While the controversy over the mine continues, the Boundary Waters area faces a more immediate problem. A rise in visitation is leading to destruction, which has become all too familiar in public lands as visitors look for wide open spaces in the midst of COVID-19.

Forest service officers report visitors are cutting down trees to get better views of lakes, washing with soap in rivers, not using latrines, leaving trash, and failing to store food properly—a dangerous practice that can have tragic consequences for the area’s black bears as well as visitors.

Ann Schwaller, Boundary Waters program manager for the Superior National Forest, suspects the damage is being caused by an influx of new visitors unfamiliar with the unique qualities of backcountry camping, an issue made worse by enhanced safety measures.

Before the pandemic, visitors were exposed to multiple “touch points.” During these face-to-face moments a forest service worker or an outfitter informed and reinforced the “Leave No Trace” ethic for mitigating human impact on natural lands that is essential to visiting the backcountry. Now those moments are mostly gone, replaced by physical distance and contactless processes. Before, visitors were required to pick up entrance passes in person, where they watched videos explaining the rules and then took a quiz. Now those videos come as attachments to emails confirming reservations. Schwaller suspects first-timers are ignoring the videos.

“Perhaps some are more used to developed campgrounds or resorts, so they just aren’t aware,” says Schwaller. “But that’s what the videos are there for and that’s what our trip planning guide is for—to learn before you come. There seems to be a disconnect between the place they’re going to visit and protecting it while they’re there.”

Schwaller says staff are doing what they can by responding immediately to damage reports and working closely with outfitters who do come into contact with visitors. But the BWCAW is vast, making it difficult to police. For the most part, Schwaller says prevention is the service’s best option.

“We’re talking education and prevention because we’re assuming a lot of these new users are going to come back,” she says, adding that the forest service isn’t planning to pull back permits just yet.

For the time being, visitors—both repeat and new—continue to arrive, immersing in what Sigurd Olson, one of the Boundary Waters’s founders, sought to preserve: “an area where the earth and its community of life are untrammeled by man, where man himself is a visitor who does not remain.”

Cinnamon Janzer is a Minneapolis-based journalist covering the Midwest. Her work has been published in the Guardian, the Washington Post, and AFAR, among others. She’s supported by the Economic Hardship Reporting Project. Follow her on Twitter.

Award-winning photographer and Minnesota native, Jim Brandenburg traveled the globe for National Geographic magazine for over three decades. His work has been published in numerous other publications, including the New York Times, Life, Time, Audubon, Smithsonian, and BBC Wildlife.