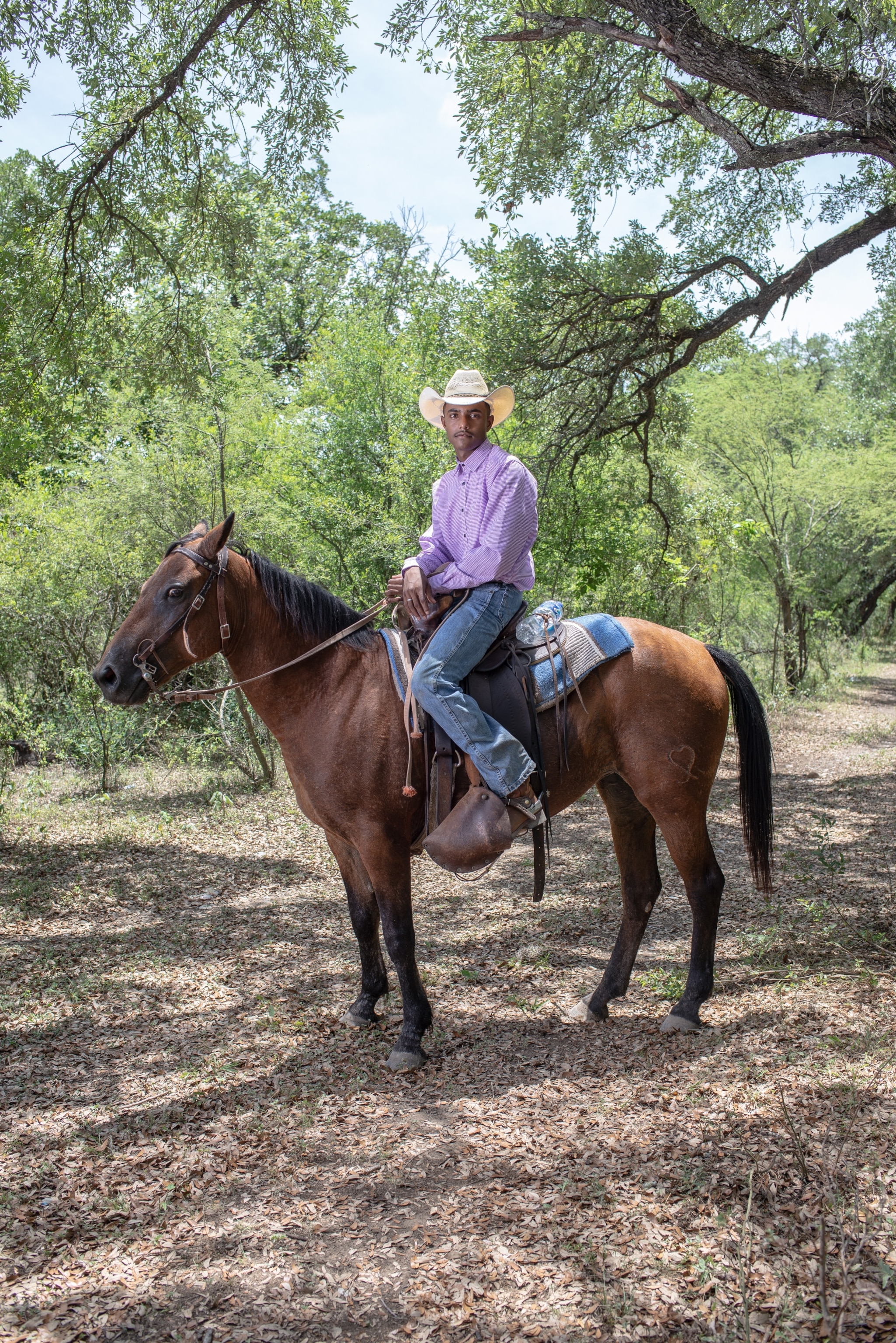 Just across the border, this Mexican community also celebrates Juneteenth

Adan Salazar, a member of the cabalgata (a parade of horseback riders), travels 20 miles from the neighboring town of Múzquiz to celebrate Juneteenth in 2018 in Nacimiento, the generational home of the Black Seminoles who escaped the threat of slavery in the United States.

It may seem unlikely that this holiday would be honored in a small village at the base of the Sierra Madre range, but Nacimiento de los Negros—meaning “Birth of the Blacks”—became a haven for the Mascogos, descendants of Black Seminoles who escaped the brutality of the antebellum South and settled in Mexico.

Now, long after the group came to Nacimiento in 1852, a new challenge remains for the Mascogos: Keeping their culture and traditions alive. In a country of approximately 130 million people, where 1.3 million identify as Afro-descendants, there are only a few hundred Mascogos. Decades of navigating ongoing drought conditions in Mexico, currently affecting 84 percent of the country, have devasted the village’s agriculture-based economy. Younger community members have little choice but to seek new opportunities elsewhere.

But there is hope—both in the strength of Mascogo identity and in the growing recognition of Juneteenth (June 19), a day that marks the freedom of enslaved people in Texas at the end of the United States Civil War and is considered by some to be America’s “second Independence Day.” On June 17, President Joseph Biden signed a bill that recognizes Juneteenth as a federal holiday. Such recognition could also strengthen the visibility of this historic community nearly 2,000 miles from Washington. D.C.

Hundreds of enslaved people fled from southern plantations to live among the Seminoles in Florida Territory during the mid-to-late 18th century. Spain granted freedom to enslaved people who escaped to Florida under their rule, but the U.S. did not recognize this agreement.

(Here’s why Juneteenth is a celebration of hope.)

In 1821, the Spanish ceded Florida to the U.S., sending the Seminoles and their Black counterparts farther south onto reservations near the Apalachicola River. Andrew Jackson, territorial governor of Florida, ordered an attack on Angola, a village built by Black Seminoles and other free Blacks near Tampa Bay. Dozens of escaped slaves were captured and sold or returned to their previous place of enslavement; many others were killed.

Nearly a decade later, Jackson, now president, signed the Indian Removal Act of 1830 into law, which required Native tribes in the southeast to relocate to Indian Territory in what is now Oklahoma. Seminole and Black leaders opposed the forced removal, later leading to the Second Seminole War (1835–42). Halfway through the confrontation, the Seminoles called for a truce and agreed to move—if their Black allies were allowed to move safely as well.

The negotiations quickly fell through, and the war resumed, but the relocation of nearly 4,000 Seminoles and 800 Black Seminoles, also known as the Trail of Tears, had already begun.

Mexico officially abolished slavery in September 1829, and in 1857, Mexico amended its constitution to reflect that all people are born free.

Alice Baumgartner, assistant professor of history at the University of Southern California, says that the Seminoles’ and Black Seminoles’ move to Mexico was part of a much longer history of Mexican authorities recruiting Native peoples who had been forced from their homelands to help defend Mexico’s northern border. In exchange for fighting, they would receive 70,000 acres of land in northern Coahuila as well as livestock, money, and agricultural tools.

“That alternative was far from perfect,” she says, “but it was an alternative nonetheless.”

Juneteenth—in Mexico and the U.S.

Even though the Emancipation Proclamation declared enslaved people in the Confederacy free on January 1, 1863, word had not fully spread to geographically isolated Texas, where slaveholders refused to comply with the federal orders.

It wasn’t until the last battle of the war when Union troops arrived in Galveston, Texas—a full two-and-a-half years after the Emancipation Proclamation was signed—that many enslaved people knew they were free.

María Esther Hammack, a historian at the University of Texas at Austin, believes the first Juneteenth celebrations in Nacimiento may have been held as early as the 1870s due to military families traveling back and forth from Nacimiento to Fort Clark in Brackettville, Texas. From 1870 to 1914, Black Seminoles were enlisted by the U.S Army as Seminole Indian “scouts” to defend against other Native American tribes as the U.S. Government expanded into West Texas.

(Remember the Alamo? A battle brews in Texas over history versus lore.)

“People in el Nacimiento had already been enjoying freedom for many years, since their arrival in Mexico in 1850,” says Hammack. “[But] Juneteenth celebration in Coahuila, Mexico began as a means to show solidarity with their brethren in the U.S.,” says Hammack. Black Seminoles still living in Brackettville drive 160 miles south to celebrate Juneteenth with the Mascogos in Nacimiento.

While many details of the earliest celebrations have been lost to time, today’s traditions are a vibrant testament to Mascogo culture. On “Día de Los Negros,” women wearing traditional polka-dot dresses, aprons, and handkerchiefs assemble at the nogalera (a park surrounded by walnut trees) at dawn to begin cooking the communal meal. The cabalgata (a parade of horseback riders) begin their 20-mile journey from the neighboring town of Múzquiz, while the elders lead the community in clap-accompanied spirituals such as “Swing Low, Sweet Chariot.” Dancing to live music and playing bingo, a popular pastime in the town, are also musts.

After a quick rest, the Mascogos reconvene at night for a party in the town’s plaza, where they dance the night away.

Threats to the Mascogo culture

With more and more Mascogo descendants leaving Nacimiento for other parts of Mexico and the U.S., Dulce Herrera, a sixth-generation Mascogo and great-granddaughter of Lucia Vazquez Valdez—one of the last surviving negros limpios (pure Blacks)—fears the traditions of her culture will be lost.

She hopes to preserve them by teaching the younger generation of Mascogos the traditional songs and gastronomy of the community. Herrera is also working with her mother, Laura, and great-grandmother to raise the awareness of Mascogo heritage in Mexico.

“Negros Mascogos is one of the most invisible Afro-descendant communities in Mexico,” she says, citing incidences in which community members were asked for official identification when visiting neighboring towns because “they think we are not Mexican.”

Her efforts have not been in vain. In May 2017, the governor of Coahuila signed a decree recognizing the Mascogos as Indigenous people of Coahuila.

As a result, Herrera and Valdez were able to secure federal funding for huertos familiares (community gardens) to assist community members with planting and selling their crops.

Luján Agusti is a visual storyteller, National Geographic Explorer, and IWMF fellow currently based in Tierra del Fuego, Argentina. Her work on the Mascogos was part of the “Africamericanos” exhibition held by the Government of Mexico and was supported by the International Women’s Media Foundation. Follow her work on Instagram.