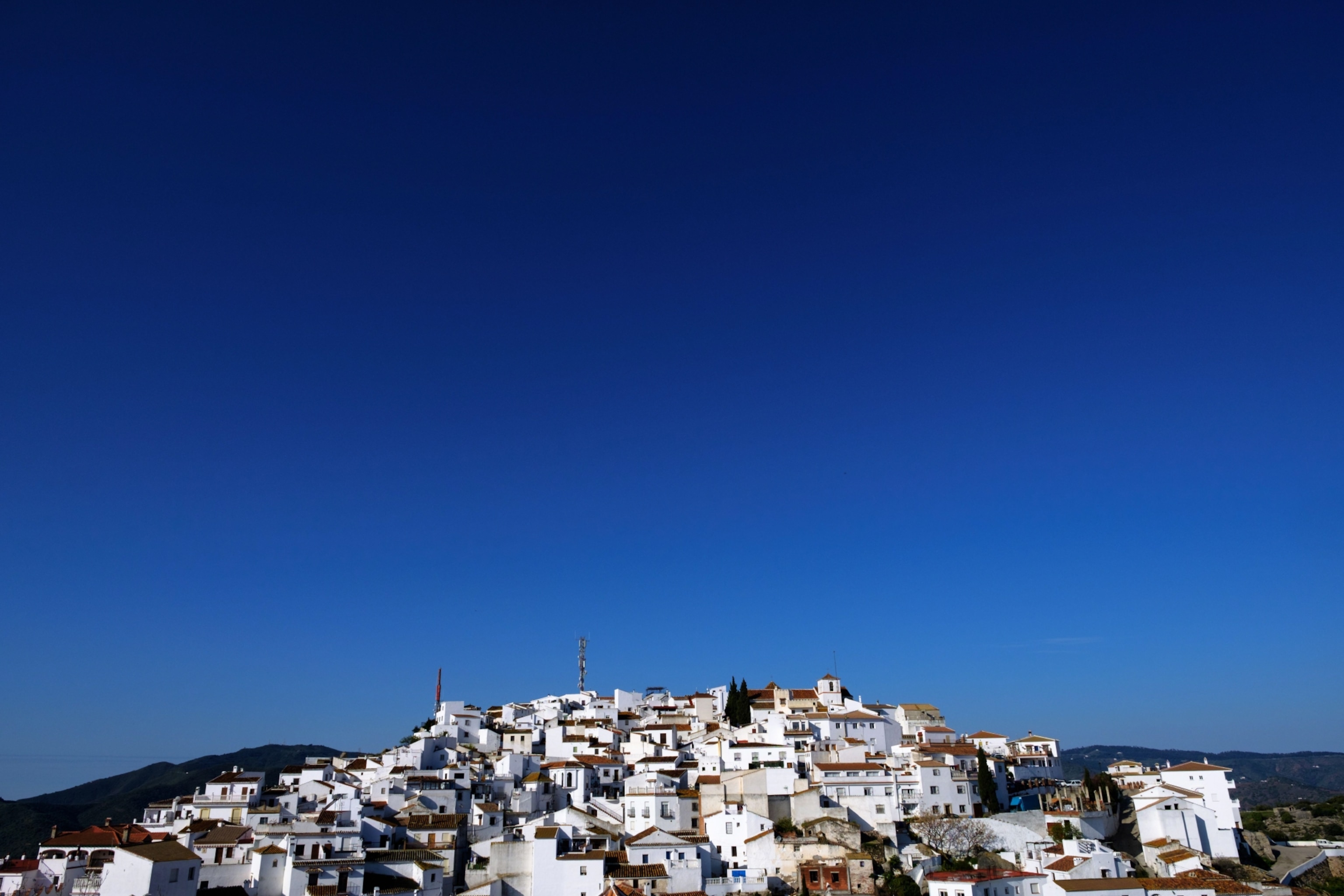 Andalusia’s ‘white towns’ were forged by past epidemics

“Pueblos blancos” (white villages), such as Camares, shown here, cap many hilltops in Andalusia in southern Spain. When a series of epidemics swept through the region between the 16th and 19th centuries, houses were painted with whitewash, made of slaked lime, as a way to protect against disease.
Photograph by The Studio Under The Wall, Alamy Stock Photo

Whitewashed villages teeter on hilltops throughout the countryside of Andalusia, Spain, but the pueblos blancos share more than beautiful architecture. They were built to defend communities against invaders during centuries of conflict.

Today the conflict is past but community remains: A pueblo blanco named Algar recently began a campaign for a local tradition they call charlas al fresco, or “fresh-air chats” to be recognized on the UNESCO World Heritage Intangible List. The honorific recognizes the importance of beliefs, customs, and skills such as dancing, food preparation, and crafts intrinsic to specific cultures and places.

“We all bring chairs into the street to spend time with our friends and neighbors. It’s been happening as long as anyone can remember,” says Algar mayor José Carlos Sánchez, who was born and raised in this Andalusian community of just 1,442 people. “It’s a special thing, to see people old and young sitting out in the street together.”

That long-running, communal discussion has the power to bridge social and political divides and brings the community together to share news, says the mayor, who launched the UNESCO bid last summer. When the pandemic allowed, residents donned their masks and kept the conversations going.

Still, fewer and fewer people are joining in the street-side socializing in the evenings—drawn, instead, to online platforms, says Sánchez. A road trip through Andalusia’s pueblos blancos not only reveals a land once caught between medieval warring kingdoms but also a way of life threatened by rapidly changing social norms.

Among the white villages of Andalusia

Algar is one of 19 pueblos blancos in this southernmost region of Spain. In the late Middle Ages, these towns formed a contested borderland.

Zoom in to see all the locations featured.

To the north were Christian kings, eager to reconquer the Iberian Peninsula. They faced off against the Islamic Emirate of Granada, a Moorish kingdom ruled from the magnificent Alhambra Palace.

(Granada, an ancient city of sultans, is a 21st-century wonder.)

The emirate surrendered to Christian forces in 1492, but Arabic-speaking Moors left their architectural legacy etched across this landscape. In the Islamic era the villages had likely begun to acquire their distinctive hue, says Eduardo Mosquera Adell, who studies historic architecture at the University of Seville, noting that 14th-century Andalusian-Arab scholar Ibn Khaldun described a method for making whitewash, or cal, from slaked lime.

Cal helped keep homes cool through the searing Andalusian summer, Mosquera says, and in time its pristine color also became associated with hygiene. When a series of epidemics from plague to cholera and yellow fever swept through the region between the 16th and 19th centuries, houses were painted with cal in the wake of infection. (It may have actually helped: Studies show that slaked lime does kill bacteria that cause cholera.)

Weathering year after year of disease, some of Andalusia’s villages slowly turned the pure white that still shines under southern Spain’s year-round sunshine.

Today, the white villages of Andalusia are also a point of cultural pride. Traditional production of Andalusian whitewash was itself given UNESCO status in 2011, and southwest of Seville the Museo de Cal de Morón demonstrates the artisanal process for visitors.

“That type of recognition can raise awareness of the community’s shared heritage,” says anthropologist Gema Carrera Díaz, director of the Atlas of the Andalusian Immaterial Heritage. While industrial paint has largely supplanted cal in Andalusia, Carrera says the UNESCO designation helped spur a revival. “It’s really important from an educational perspective.”

To see just how spectacular the white villages can be, rent a car and head for the hills. Linked by a tangle of narrow mountain roads, Andalusia’s pueblos blancos invite leisurely road trips that reveal the traditional ways of life that have persevered here.

(Find mosaics and mystery in an outpost of the Roman empire.)

Start the journey at the northeast corner of the pueblos blancos region, where lines of silver-leafed olive trees march away from the hilltop village of Olvera. From there, a short drive leads to Setenil de las Bodegas, where historic homes were built directly into a series of overhanging cliff faces.

The landscape turns wild as the road twists southwest into the Parque Natural Sierra de Grazalema and towards Zahara de la Sierra, a tiny village that makes the most of a spectacular setting atop a rocky promontory. Zigzag over the high pass Puerto de las Palomas to reach Grazalema, a shepherding village famed for aged cheese and warm woolen clothing.

After mountain peaks give way to rolling farms, you’ll arrive in Algar—the pretty pueblo blanco where charlas al fresco still last all through the summer night.

The future of ‘charlas al fresco’ in Algar

That custom is not unique to Algar, Carrera cautions. “It’s a tradition that you see in many parts of Andalusia and across the Mediterranean,” she says. “The summers are very warm, so people always went outside to cool off, and cultures here have placed a lot of value in socializing.”

But when it comes to preserving heritage, Carrera says, customs don’t need to be singular to be worthy of recognition. It’s more significant that they’re representative, which this one is. And for a village like Algar, even the process of seeking UNESCO status might help sustain a traditional way of life. It can spark conversations about shared values, and which customs must be safeguarded in years to come.

“Especially in a moment like this one, in a pandemic, when so much is changing and so many social relations are changing, it can have an important effect on that community,” Carrera says. “They begin to take pride in a practice, which then gains new value.”

The Algar mayor’s campaign for UNESCO recognition isn’t just about looking backwards. Sánchez also hopes his efforts will bring fresh energy to a quiet town that few outsiders—even Spaniards from nearby cities—are familiar with. He wants to put the town on the map for friendliness, Sánchez says, insisting that travelers are welcome to join in.

For now, the UNESCO bid is pending. The process of recognition can take years. At home in Algar, however, Sánchez has already seen results.

“After I launched the UNESCO campaign, I saw a car pull up one summer evening and two strangers got out with a pair of beach chairs,” he says, laughing at the memory. The mayor was thrilled that two outsiders heard about the tradition and came to take part. “Come to Algar for a chat next summer,” Sánchez told me. “You can even bring a beach chair.”

Based in Vermont, travel writer Jen Rose Smith covers outdoor adventure, remote places, and traditional cuisine for CNN, the Washington Post, Outside, and other outlets. Follow her on Instagram.