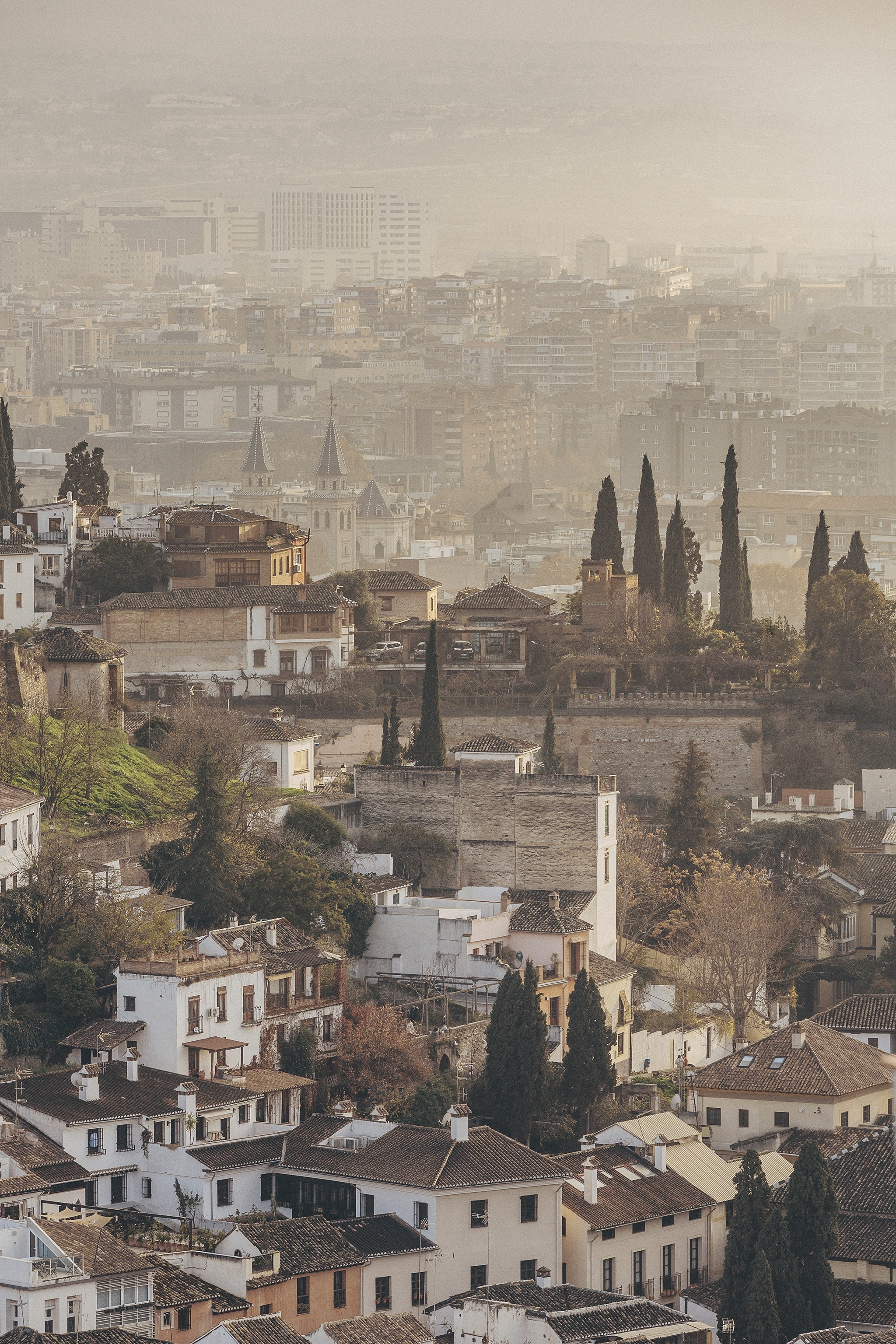 This ancient city of sultans is a 21st-century wonder

In Spain, Granada preserves treasures from the past. But trendy hotspots and a new ecopark have this city looking to the future.

Mirador de San Nicolás, in the Albaicín neighborhood, is a popular perch for catching sunset over the ancient city of Granada, Spain.

Returning to the Alhambra is like rereading a book. The hilltop citadel built by the Nasrid sultans above Granada, in Spain’s autonomous Andalusia region, was a masterpiece of medieval engineering, but also of literature—poetry and philosophy expressed in dream-like architecture. Verses, blessings, and ruminations were etched into its facades so the structure would seem to speak.

“The perpetual bliss, the continual ecstasy…” runs one long strand around the reflecting pool of the Comares Palace. “Be sparing with your words, and you’ll go in peace” advises the inner wall above the sultan’s throne. Above, a domed roof composed of more than 8,000 pieces of wood and inlaid with a constellation of stars represents all seven heavens of Islamic cosmology.

The grand, medieval Alhambra palace, a UNESCO World Heritage Site, sets the tone in this historic city awash with traditions—one of Nat Geo’s Best of the World destinations. But while one foot is in the past, the other is tapping out a modern beat. Besides its history of flamenco singing and dancing, Granada is a European hub for the reigning hip-hop subgenre of trap music. It’s a university town, forever replenished by students, a place where ultra-traditional tapas bars share bustling streets with contemporary fusion restaurants.

Founded in the 11th century, Granada was a flourishing Moorish stronghold until it fell to Ferdinand II and Isabella I’s Catholic rule in 1492. In the ensuing years, Muslims and Jews were forced into the Albaicín, a neighborhood north of the Alhambra.

In modern times, the medieval Muslim quarter has preserved its sideways maze of whitewashed houses, spilling down the hillside on zigzagging narrow lanes. Indeed, there’s an edge-of-the-world appeal to the cafes and tapas bars that hang over the switchbacks and stairways that offer breathtaking views of the Alhambra.

It’s still possible to feel the passage of centuries through atavistic portals like El Bañuelo, the bunker-like remains of an 11th-century hammam bathhouse. Later Catholic monarchs saw to the destruction of many similar spas, equating them with sin. Thankfully this one survived and lives on as a small museum.

The king and queen who reconquered Spain and sent Christopher Columbus to the New World are buried together in the Royal Chapel of the Cathedral of Santa María de la Encarnación. Here, one of many Catholic sanctuaries that sprouted up during the couple’s reign, a gloomy mood of gothic romance prevails around their sculpted tombs.

Walking around the historic core, visitors find other famous figures, including Federico García Lorca. Born in Granada and executed with one of the first shots fired in the Spanish Civil War, the poet is still mourned like a favorite son around this city. Guided tours of his family’s summer house, Huerta de San Vicente, take visitors through his life and work. The park outside—formerly an orchard—is a fine place to read a few of his lines.

(This off-the-beaten-track Belgian city is where the Big Bang theory was born.)

Spain’s small-plate dining culture began in this region, and Granada’s hostelries can be absurdly generous in observing the local custom of free tapas with every alcoholic drink. The shortest glass of beer may come with a pork loin sandwich the size of your face. Hitting a few bars around Realejo or Plaza Nueva will leave you as stuffed and stunned as repeat trips to a wedding buffet.

In the glut of tapas bars, La Trastienda keeps a low profile, tucked behind the counter of a butcher shop. In 1836, the owner started feeding cold cuts to hungry customers in the queue. Today’s fare is still premium-grade cured meats and smoked cheeses.

Traditional carmen (traditional-style houses) scatter the Albaicín, garden vineyards and orchards growing over their high white walls. Topmost among them is Las Tomasas, which offers a triumphant view of the Alhambra. The food here is built on regional and national staples from baby squid to bull’s tail.

In this Spanish town, tapas go hand in hand not only with sherry but also cocktails. A relic of the Civil War era, Bodegas Castañeda is stacked with load-bearing bottles and barrels full of local wines and sherries, but the house special is calicasas—a homemade doozy concocted from vermouth, gin, rum, soda, and spices.

Tragofino-SanMatías 30 is a relatively young and cool alternative to Granada’s antique taverns. It also stands out for its superior take on the pomegranate cocktails served all over town. Here, it’s made with fresh pulp and Pama liqueur and served in a jam jar.

Flamenco was born in Andalusia, about a millennium ago, and has evolved into a semi-improvised art form of percussive footwork, plaintive singing, and flurries of acoustic guitar. The question of the most “authentic” venue in Granada is still the subject of furious debate among local aficionados.

Popular cave bars like Cueva de la Rocío in the Sacromonte neighborhood can amplify the style’s explosive tempos, but the sounds and colors also whirl in airier settings like Jardines de Zoraya, a conjoined flamenco stage and garden restaurant forming a world-class tablao venue for dinner and a show.

These days Granada’s music scene is fed by students and immigrants from across Europe, North Africa, and Latin America. As a result, you’ll hear plenty of genres just walking around—cellists from the Superior Royal Conservatory of Music Victoria Eugenia de Granada practicing in a plaza or Balkan accordion ballads bleeding into French rap battles at jam sessions outside Huerto de Carlos garden.

The city’s genre-blurring club culture is further melted down at Boogaclub, a small and beloved dance venue. Hosting regular jazz, reggae, and flamenco sessions, Booga also played a key role in breaking the hip-hop splinter groups who went on to make trap music the crisp, bouncy, auto-tuned sound of the Spanish underground.

Venturing outside the city center yields other wonders ripe for exploration. The suburban village of Monachil leads into the Sierra Nevada range by way of an exhilarating trail through the Los Cahorros valley. Long, high, hanging bridges sway dramatically underfoot, and looming canyon walls lean so far over the river that you can only pass by grabbing metal handholds that have been hammered into the rock.

A half-hour drive outside the city limits takes travelers to a prehistoric landscape of fossil-rich clay hills. This is the “other Alhambra,” claim promoters of the scrolling geopark around Granada, newly designated by UNESCO as a heritage site.

Early Moorish settlers dug subterranean dwellings in that terrain, which were later occupied by people who couldn’t afford to build or buy homes. These dwellings were recently repurposed by operators like Cuevas Almagruz, a family-owned cavern network housing an underground museum and a row of rustic-chic accommodations carved into soft red rock.

Hosted in one of these chambers, visitors become a figure in a folk tale for a night. They sleep and dream in the belly of a mountain, then wake and rise from the mouth of a cave, ready to wander through history in this unique region of southern Spain.

A version of this story first published in the March 2021 issue of National Geographic Traveller (UK).