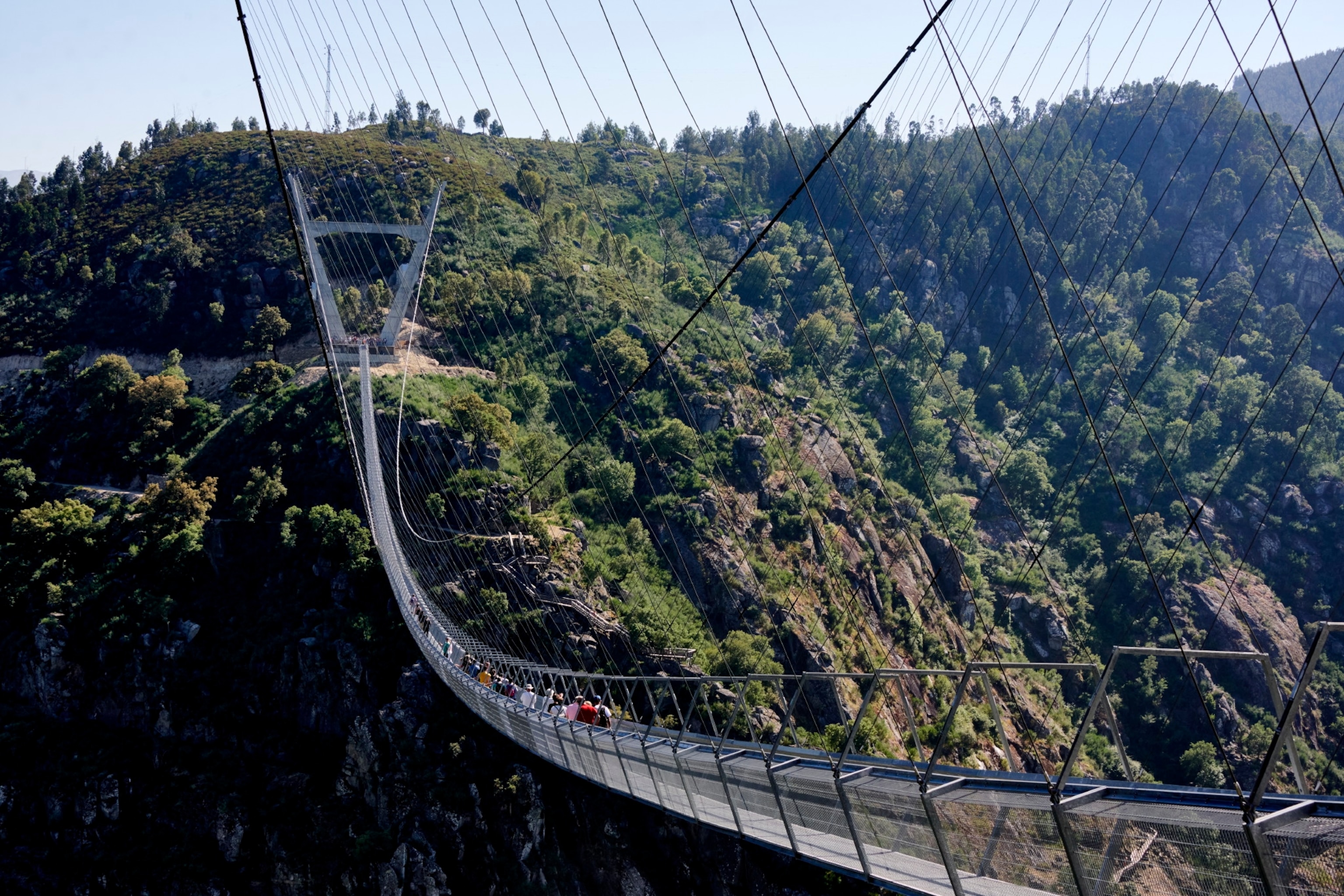 These 12 stunning bridges are engineering marvels

Some of the world’s most beautiful bridges, such as Portugal’s 516 Arouca, are architectural feats that keep visitors in a state of suspended disbelief.
Photograph by Horacio Villalobos, Corbis/Getty Images

Road trippers this summer may discover that epic bridges are also a journey in themselves—a chance to spot bottlenose dolphins and peregrine falcons, an opportunity to see a destination from a new, bird’s-eye perspective.

As a child growing up on the Eastern Shore of Maryland, crossing a big bridge meant entering a portal to a new world. The majestic, dual-span Chesapeake Bay Bridge and the 23-mile-long Chesapeake Bay Bridge Tunnel were our two main routes off of the rural shore toward “real cities” and airports with more than two gates.

Bridges all around the world, from West Virginia’s New River Gorge to Peru’s Q’eswachaka give every traveler an opportunity to connect and explore. In fact, this year, the Q’eswachaka quite literally brought communities together to rebuild a time-honored bridge that had collapsed from pandemic-caused neglect.

Whether you’re a thrill seeker or a nature lover, we’ve got a bridge for you. Here are 12 spans we just can’t get over.

For 500 years, a hand-woven suspension bridge has spanned 92 feet across the Apurimac canyon. Called Q’eswachaka, the bridge is rebuilt every year in a ritual where locals untie the existing bridge and weave a new one out of local ishu grass. The ancient bridge-building ceremony is then celebrated with traditional song and dance.

The annual reweaving was canceled in 2020, due to the pandemic, causing the bridge—one of the last surviving Inca rope bridges—to collapse from disrepair. But community members were able to gather once more in June 2021 to rebuild the bridge that has connected communities divided by the Apurimac river for centuries.

Jet-setting north of the equator? Spot puffins and sharks from Ireland’s 100-foot-high Carrick-a-Rede Rope Bridge—first constructed by salmon fishermen in 1755. If that’s not high enough, take a drive across France’s Millau Viaduct or China’s record-setting Beipanjiang Bridge—a whopping 1,854 feet above the Beipan River.

0:12
The Rakotzbrücke is a “devil’s bridge,” a type of ancient European bridge so precarious that locals believe the devil built them, in exchange for a person’s soul.

Commissioned by Friedrich Hermann Rötschke in 1860, Rakotzbrücke’s perfect parabola and basalt spires make it a legendary “devil’s bridge.” According to Rakotzbrücke’s myth, the builder crossed the finished bridge, sacrificing himself in exchange for the devil’s help. A great time to visit is during the spring rhododendron bloom; for great views board the Muskau Forest Railway.

Devil’s bridges are a thing. You can visit others in Switzerland, Bulgaria, Italy, Wales, France, England, Spain, and Arizona.

Nongriat, India, is one of the world’s wettest places—a jungle of waterfalls, beehives, and betel nut trees. For hundreds of years local Khasi have dealt with seasonal river surges by weaving living footbridges out of Indian rubber tree roots. Umshiang, a double-decker (soon to be triple-decker) root bridge is expected to survive several hundred years and can support the weight of 50 people at once.

For even more fresh air (both in and out of the city) check out Malaysia’s Langkawi Sky Bridge, or natural bridges in Virginia, Alabama, Arkansas, and Seoul.

0:21
The Rolling Bridge curls up into a freestanding circular sculpture on one bank of Paddington Basin.
Video Courtesy Heatherwick Studio

The Guditjmara people have been harvesting eels in Lake Condah, Victoria, for more than 6,000 years, using a system of canals and traps that is one of the earliest surviving examples of freshwater aquaculture. These basket-woven Koori eel traps served as inspiration for Melbourne’s Webb Bridge, designed by world-renowned sculptor Robert Owen. Webb Bridge is best explored by bike via the Capital City Trail or by paddling the Yarra River on a moonlight kayak tour.

At 1,693 feet long, the 516 Arouca has surpassed Switzerland’s Charles Kuonen Suspension Bridge as the longest suspension pedestrian bridge in the world. Breathtaking views of the Paiva Gorge and Aguieiras Waterfall may just be enough to distract brave souls from the 574-foot drop to the Paiva River below.

Poets, painters, and opera singers have swooned over Ponte dei Sospiri, Venice’s Bridge of Sighs, for centuries. Gondoliers claim that kissing below the bridge during sunset, as the bells of St. Mark’s toll, is a surefire recipe for everlasting love. The connecting palace offers tours through the bridge with blue-lagoon views of San Giorgio Maggiore. Kayak the Rio di Palazzo beneath the bridge to see its 17th-century limestone mascarons, ornately carved masks meant to ward off evil spirits.

Other starry-eyed bridge strolls: the Si-o-se-pol Bridge in Iran, the Yeojwacheon Romance Bridge in South Korea, and the geranium-flooded 17th-century frescoes of Kapellbrücke in Lucerne, Switzerland.

More than three million vehicles cross San Francisco’s Golden Gate Bridge every month. Skip the exhaust-filled bridge sidewalk and opt for a bird’s-eye view of the mountain-high suspension bridge from Hawk Hill, where a new trail offers easier slopes, plus new signage and guard rails. Or whale watch while lounging on a deck trampoline as you sail beneath the bridge at sunset.

Steel and local Balau wood curve together to form the spectacular Henderson Waves, the highest pedestrian bridge in Singapore. The bridge connects Telok Blangah Hill Park and Mount Faber Park as part of the six-mile-long Southern Ridges walk. Visit the bridge at sunrise for fewer crowds and excellent birdwatching, including a chance to see the rare black baza.

0:29
France’s ancient aqueduct was built from limestone transported via boat from a nearby quarry.
Video by Paul Mathon, Getty Images

Arching over the Gardon River, halfway between Nîmes and Uzès, sits the massive Pont du Gard, a limestone aqueduct built by the Romans roughly 2,000 years ago. Visit in summer for a leisurely paddle and afternoon swim, then wind your way past a 1,000-year-old olive tree on the way to Les Terraces for a sunset glass of Clairette.

Want more than a calm kayak? Visit Bosnia’s Stari Most for diving, Australia’s Sydney Harbor Bridge for climbing (re-opens July 10, 2021), and Skypark Sochi in Russia for skybridge walks and bungee-jumping.

On March 7, 1965, 600 voting rights activists, led by Dr. Martin Luther King Jr., began marching across Selma’s Edmund Pettus Bridge toward Montgomery, Alabama. Because of the bridge’s design, they couldn’t see the violent counter-protestors waiting for them on the other side. When the activists finally saw those on the other side, they marched forward anyway. Two weeks later, the march began again, successfully, with not 600, but more than 3,000 supporters. The annual Selma Bridge Crossing Jubilee honors this historic moment of bravely.

Other bridges that have made their mark on history include Turkey’s Taşköprü, West Virginia’s Philippi Covered Bridge, Israel’s Ad Halom, and Spain’s Alcántara.

Wander down other lovely footbridges in the Netherlands, South Korea (plaza closed through July 31, 2021), the U.K., and Switzerland.

This list was compiled with the help of structural and civil engineers, Mark R. Cruvellier and Stephen Ressler. Cait Etherton is a Virginia-based writer and frequent contributor to National Geographic Travel.

This story has been updated with new information since it first published on Jan. 31, 2018.