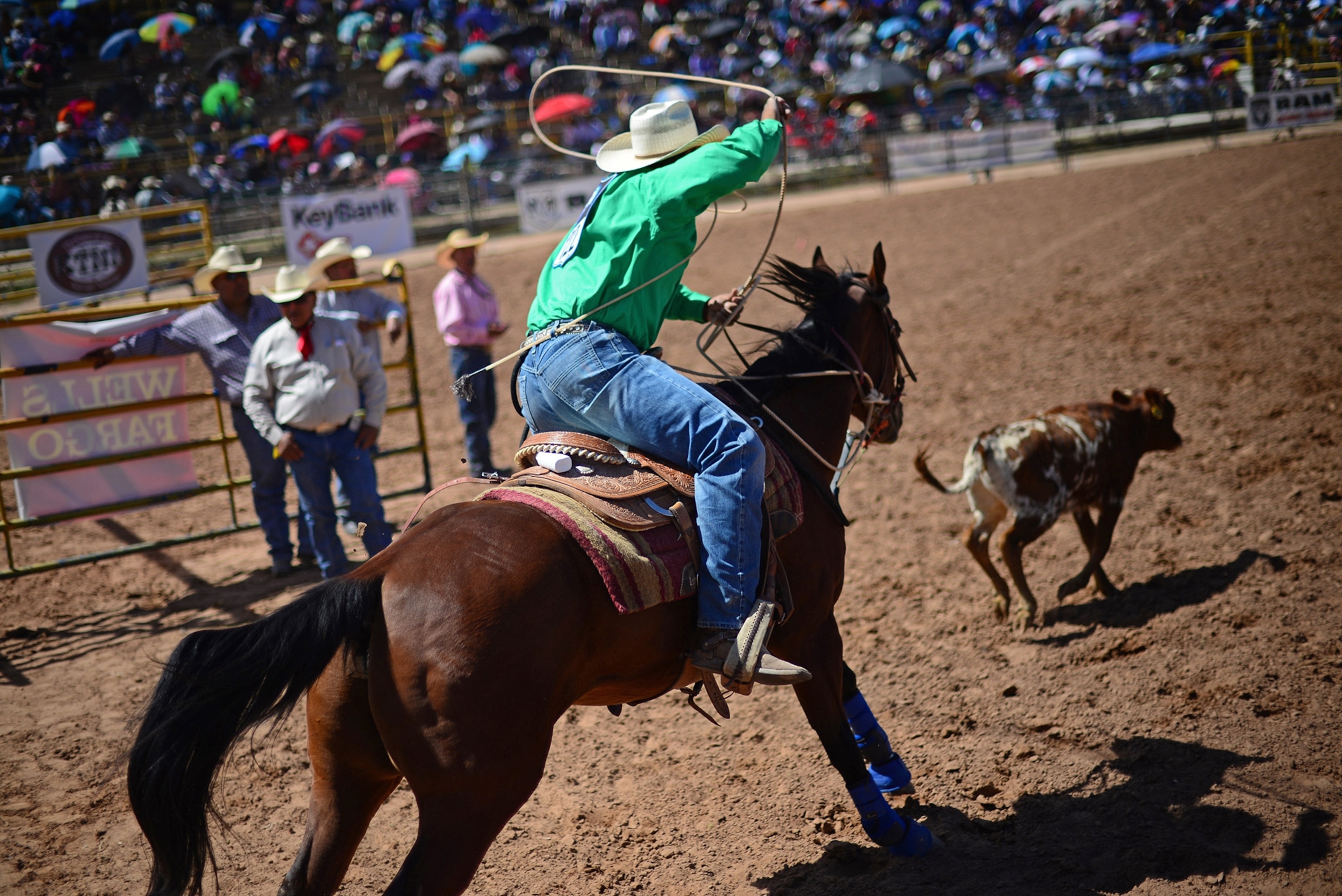 Go inside the close-knit world of Native American rodeo

Keeping a cowboy legacy alive in the face of pandemic challenges, this Montana family is at the forefront of a growing sport.

At the Navajo Nation Fair—an event that showcases and preserves Navajo (Diné) heritage in Window Rock, Arizona—riders compete during a rodeo event. Native riders are among today’s elite rodeo athletes.

Some consider rodeo the world’s most dangerous sport—and despite dating from the late 1800s, it’s one of the fastest-growing in the United States, worth hundreds of millions of dollars.

With roots in 19th-century cattle farming, rodeo is often considered the domain of white ranchers, but it has a long history of participation from people of color. In the close-knit world of Native American rodeo, the sport is a way to sustain community culture and to stimulate economic activity.

“We have communities from all over,” says Michael “Bo” Vocu, president of the Indian National Finals Rodeo (INFR), an organization formed in the 1970s by the uniting of several Indian Rodeo Associations from the U.S. and Canada. “If we go to Oklahoma or Canada or somewhere, we have folks we know there, or if people come to Montana needing anything, we’d help them work something out.”

Some of the top-ranked riders on the Professional Bull Riders circuit (PBR) are Native. For the past two years, the annual PBR Global Cup event—which draws cowboys from Canada, the U.S., Mexico, Brazil, and Australia—has included a Native American team, the USA Wolves. The 2018 PBR Rookie of the Year, Keyshawn Whitehorse, is Diné (Navajo) from Utah.

But the coronavirus pandemic has dealt a blow to the sport, and Native communities as a whole. In early spring, the virus appeared in Native American communities, prompting lockdowns as life ground to a halt. Dozens of rodeo events across the U.S. and Canada were postponed, then canceled outright. The Cheyenne Frontier Days—a non-Native-run event that attracts around 200,000 people to Wyoming every July for a rodeo, carnival, concerts, and an early morning cattle drive through its city streets—was called off for the first time in its 124-year history.

As the future remains uncertain in the face of the pandemic, one Native rodeo family is weathering the storm.

For the Vocu family, of Ashland, Montana, rodeo is a way of life.

Bo is a former bull rider. Barrel-racing world champion Shelly Vocu comes from a family that has competed for generations. Their sons, Bo Tyler and Logan, grew up traveling thousands of miles for the chance to compete for eight potentially life-threatening seconds. “They’ve been traveling since they were born,” says Shelly.

A typical pre-pandemic weekend sees the family up early on a Thursday to check a trailer full of hay bales, clean plaid shirts, saddles and bridles, and three roping horses before setting out on a long-haul drive through the open plains of central Montana. The family has competed in events from Calgary, Canada (a 24-hour drive from home), to Florida (a 3,700-mile round-trip).

When the Vocus attended the 2019 Chippewa Cree Annual Celebration, in Box Elder, Montana, tents and children’s playpens were pitched next to horse trailers, while kids roamed freely on the backs of Shetland ponies. After a prayer in Cree and English, the rodeo got going with the senior roping division—the elders’ counterpart to the upcoming youth events.

Here’s why traditional Indigenous beliefs are a powerful tool for understanding the pandemic.

Bo’s generation was the first to turn rodeo events into family-friendly affairs. In order to encourage newcomers, INFR doesn’t limit the number of competitors in its events.

Bo also pushed for adding women’s competitions, mainly because it makes financial sense. In 2020, a new women’s rodeo world championship (not exclusive to Natives) debuted in Arlington, Texas, with $750,000 in prize money.

Much of this success is down to engaging youth—like Bo Tyler and Logan. Of the INFR’s 3,000 members, the ever-expanding junior class numbers 500, largely because more events are open to youngsters than in the past. Unlike many rodeos, INFR-sanctioned events hold junior competitions as part of the main rodeo weekend. It gives the next generation of riders a chance to meet and learn from their heroes face to face.

Although Native rodeo is a thriving and resilient industry, it’s not without its struggles.

With more Native Americans living off-reservation than ever before (78 percent, according to the 2010 census), the cowboy life is quickly eroding. Rodeo sponsorships are harder to obtain. The remainder of INFR’s funding is tribal money, from income sources such as casinos.

The pandemic has made these economic challenges even more acute. “The tribes that usually sponsor rodeos are putting all their money into COVID prevention and relief,” Bo says.

The INFR’s centerpiece event usually brings tens of thousands of Native Americans, rodeo fans, and competitors to Las Vegas, Nevada, each October. As head of the INFR, Bo agonized over whether or not to hold the event last year, before eventually canceling.

Here’s how Indigenous people are building solidarity during the pandemic.

Bo wasn’t alone. Although INFR affiliates in Oklahoma and North Dakota did go ahead with the 2020 season—as did a number of major, non-Native-run competitions, including the PBR circuit—most Native-run rodeo events across the U.S. and Canada were canceled.

The struggles to keep the sport thriving often pale in comparison to the risks riders face in the ring. Although fatalities are rare, they happen. In January 2019, professional bull rider Mason Lowe died after a bull stomped on his chest at a rodeo in Colorado. Twelve months later, 19-year-old Chase Bishop died practicing on a bull in Stephenville, Texas.

Learn about the Iroquois’ quest to compete in Olympic lacrosse: “It’s more than a game to us.”

The Vocu family hasn’t been left unscathed. In 2018, Bo Tyler​ broke both bones in his right forearm after landing hard from a bucking off. His dad has a titanium plate underneath most of the right side of his face from an injury sustained during his own bull riding days.

But when preparing for an experience that risks serious injury or worse, Bo Tyler is mostly philosophical. “If you overthink it, you end up beating yourself,” he says.

Humans don’t carry the only risk in rodeo: There’s also long-standing criticism from animal welfare groups who say horses and livestock are unnecessarily put under stress and at risk of injury for entertainment and economic gain. Critics object not only to the nature of events but also to the tools that are sometimes used, including flank straps to make animals buck, and electric prods. Bulls and horses are often bred especially for competitions, and the wilder they are, the better. (Rodeo events like bronc and bull riding use stock animals provided by contractors, while riders bring their own horses for events like barrel racing.)

But for the Vocus, rodeo is a vital part of their life and heritage—and their future. This winter, Bo Tyler finds himself in Texas, attending college classes online and participating in bull riding events in one of the few states still holding rodeos. Despite the pandemic setbacks, he hopes to do well in enough non-Native tournaments over the coming months to qualify for a card that would send him to join his idols on the PBR circuit.

Aug. 18, 2014 - At the Cheyenne Frontier Days rodeo, in Cheyenne, Wyoming, the bullfighters of the Championship Bull Riding World Finals risk life and limb to keep the bull riders from harm. Different from matador or torero bullfighters, these professionals protect the bull riders. Once a rider is thrown off, the bullfighters' job is to rush in to grab the attention of the bull, allowing the rider to escape. Injuries are a constant threat, but the safety of the bull riders is their top priority.
Stephen Starr is an Irish journalist and author who reported from the Middle East for a decade before moving to Ohio. Find Stephen on Twitter and Instagram.