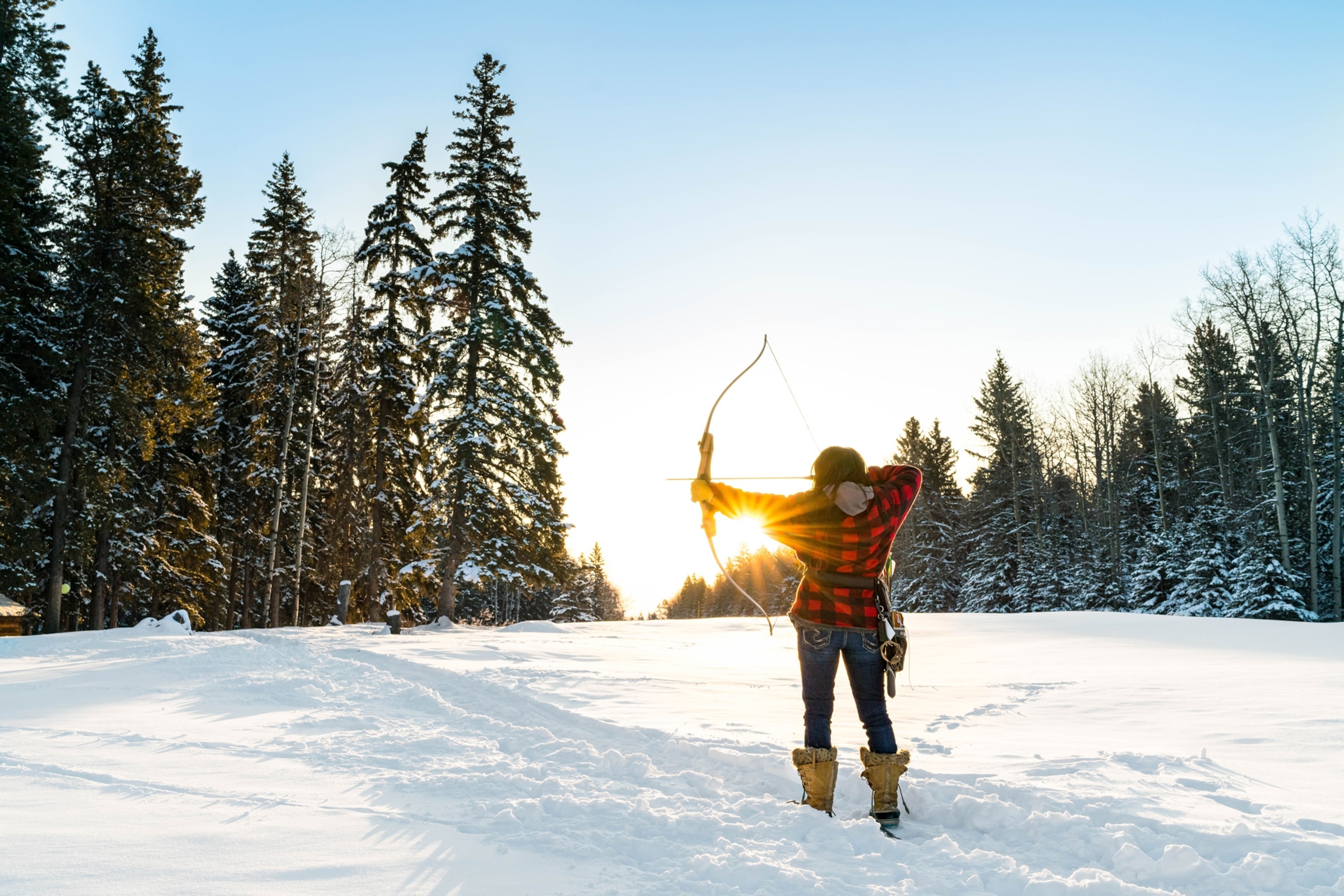 Long marginalized by the tourism sector, Indigenous women are bringing First Nations, Métis, and Inuit narratives to the mainstream.

During one of her tours, Tracey Klettl, owner and operator of Painted Warriors, demonstrates how Indigenous hunters would use a bow and arrow.

Flu-busting bedstraw. Soothing broadleaf plantain. Even the humble dandelion, which can be used to fight inflammation, tells of the natural healing power of plants.

But Brenda Holder—a woman of Cree descent who shares her peoples’ knowledge on tours through rural Alberta, Canada—says her preferred medicinal herb is fireweed, a fuchsia flowering plant that has both antibacterial and antiviral properties. It’s been used to treat everything from burns and the common cold to HIV and AIDS.

When visitors learn about the centuries-old plant wisdom of Indigenous cultures, “it totally floors people,” Holder says. “Most people have a desire to connect to the land in this way. They’re seekers. They just don’t know it.”

(Related: Read more about Indigenous Canada in our Best of the World 2021.)

Two decades ago Holder started her company, Mahikan Trails, responding to a nascent consumer appetite for Indigenous-led tourist experiences. Since then, the market has grown in Canada for experiential tour companies that connect curious visitors to the cultures of First Nations, Métis, and Inuit people.

This tourism boom represents a remarkable change from the early years of Canada’s tourism development, when Indigenous people were largely excluded and sometimes exploited by the industry. But things are changing: Indigenous people are more visible than ever, and that’s partly thanks to a growing group of women who are spearheading change in the sector.

But Holder says that breaking into the mainstream has been difficult. “The tourism industry has not made space for us; we made space for us,” says Holder. “We decided a while ago that we’re going to take control and do things the way we want to.”

Tour operators have banded together to form grassroot, Indigenous-run organizations, including Indigenous Tourism Association of Canada (ITAC) and Indigenous Tourism B.C. These groups develop and promote the work of Indigenous people in the tourism space, and ensure members have control over their own narratives.

Photography by Indigenous Tourism Alberta / Roam Creative
Please be respectful of copyright. Unauthorized use is prohibited.

“There used to be a sort of ‘pan-Indianism’ promoted in Canadian tourism that contributed to stereotypes about Indigenous people,” says Marilyn Yadultin Jensen, vice-chair of the Indigenous Tourism Association of Canada (ITAC) and an educator in Indigenous governance. “Now we have a stronger partnership with organizations like Destination Canada—the government-owned national research and marketing company dedicated to supporting Canada’s tourism industry—and Indigenous people are at the front end of the industry.”

Candace Campo, owner of Talaysay Tours, introduces visitors to the customs, history, and practices of the Shíshálh and Squamish people through educational hikes, sailing tours, and other eco excursions around Vancouver and the Sunshine Coast, B.C.

“We really want our guests to know who we are,” she says. “We’re tour guides; we share stories. That’s how we foster more understanding.”

For many Indigenous tour operators, their work represents a reclamation of their ancestral land. Holder’s company runs tours out of Jasper National Park—where, a decade earlier, the Canadian government evicted her Cree ancestors to open the then-new park. Many of the country’s most-visited green spaces were home to Indigenous populations before they were forced out to develop the national parks system in the 19th century. In Ontario’s Algonquin Park, for example, the Algonquin people were denied title and recognition for their towns that fell within the park’s boundaries. They were eventually moved out completely.

“My family was one of the first ones back in Jasper after being moved from the area,” says Holder. “I feel as though we’ve always been on this landscape. There’s spiritual evidence of us here.”

Even when Indigenous people were encouraged back into national parks, it was often so that their cultures could be appropriated for financial gain. The Stoney-Nakoda people were invited to perform at the Banff Indian Days festival that ran into the 1970s. Using language then and now considered slurs by Indigenous people, ads from the event promised First Nation people dressed in full regalia, and performers were expected to dance, whoop, and sport costumes that mixed “Wild West” tropes with headdresses and buckskin.

Related: How to make a traditional woven basket

Using the tools of his late father, Stephen Jerome continues the traditional indigenous art of basketmaking in this meditative short by filmmaker Heather Condo. The Short Film Showcase spotlights exceptional short videos created by filmmakers from around the web and selected by National Geographic editors. The filmmakers created the content presented, and the opinions expressed are their own, not those of National Geographic Partners.

(Related: From teepees to headdresses, signs of Indigenous culture are ubiquitous in America—but often misrepresented.)

Despite this patchy history, Canada’s tourism industry slowly began making way for Indigenous voices. Destination Canada partnered with ITAC a year after the latter’s inception in 2015. Both parties exchange knowledge and promote each other’s work in relevant spaces.

“Developing these connections takes time,” says David Robinson, vice president of strategy and stakeholder relations at Destination Canada. “Our partnership [with ITAC] has really helped advance our understanding of Indigenous tourism. We rely on their guidance.”

Independent operators such as Tracey Klettl, Brenda’s sister and the owner of Albertan tour company Painted Warriors, hope to educate travelers and help them fill in certain knowledge gaps about Indigenous communities.

“A lot Indigenous tourism used to be promoted or conducted by non-Indigenous operators, which generally put the wrong message across,” says Klettl. “Programs run by non-Indigenous people [up until the last decade] painted Indigenous women as servers, but that’s really not the way it is [in our cultures].”

“Indigenous women are traditionally very respected in our cultures,” continues Klettl. “But when Indigenous women became more integrated into Western society, it was assumed by colonizers that they had a subservient role to men. The mainstream tourism industry only understands this role for women.”

A traditional pair of Dene slippers—made of moose hide, beaver fur, and adorned with colorful beads—are displayed for tourists in Wekweeti, Northwest Territories.

These decorative flowers, stitched onto fabric, will later be sewn onto moccasins, gloves, and jackets.

This portrayal of Indigenous women—as docile and home-bound—was turned into a spectacle at the Calgary Stampede, an annual rodeo that drew thousands of visitors a year. Since 1912, the Stampede has erected an Indian Village on the festival grounds, where the domestic activities of Indigenous women are put on full display—sewing, cooking, decorating. However, in 2018, the Stampede renamed the village the Elbow River Camp. The rodeo also went from crowning an Indian Princess to crowning a First Nations Princess each year.

Klettl hopes that she and the other female Métis and First Nations instructors employed by her company will challenge any stereotypes travelers may hold about Indigenous women by teaching them traditional survival skills like hunting, archery, and horseback riding—activities that do not conform to perceived gender norms.

“It’s important to me that visitors understand that these practices are essential to our lifestyle,” she says. “Hunting is very spiritual for us—there’s a lot of respect given to the animal as a living being.”

Re-educating travelers, she believes, is the first step towards helping them become more attuned to the alarming rate at which the women in her community are still dying and disappearing. Over the past three decades, more than 4,000 Indigenous women have gone missing. Despite a three-year-long national inquiry into the crisis, the Canadian government has been slow to act, and Indigenous women are still 12 times more likely than other women in Canada to go missing or be killed.

“There’s a narrative being sold by Canadian society that Indigenous women are meek, and this causes a lot of misunderstanding around the crisis,” Klettl says. “We’re losing our voices, and our communities just want to be heard.”

Cheyenne Hackett, who is of Homalco First Nation descent and leads B.C.-based experiences from Klahoose Coastal Adventures, performs a Women’s Warrior Song before each of her tours. A haunting prayer sung over the slow heartbeat of her drums, the song is dedicated to the thousands of women who have disappeared.

Women like Klettl and Hackett not only work to foster understanding and awareness around their cultures, they also use their tours to give a voice to the women who are no longer with them.

(Related: Meet the Indigenous people who are finding ways to strengthen community bonds during the pandemic.)

Although demand for Indigenous tourism continues to surge, the coronavirus crisis has proven a stumbling block for independent operators—but many are cautiously resuming tours and running educational programs for mostly Canadian visitors. Cultural learning, according to Klettl, flows both ways.

Jessica Prupas is a Canadian travel and food writer based in London. Follow her adventures on Instagram.
Pat Kane is a documentary photographer living in Yellowknife, Northwest Territories, Canada. He works in small, remote sub-arctic communities to help amplify stories that impact people who live in northern Canada. Follow his work on his website and Instagram.