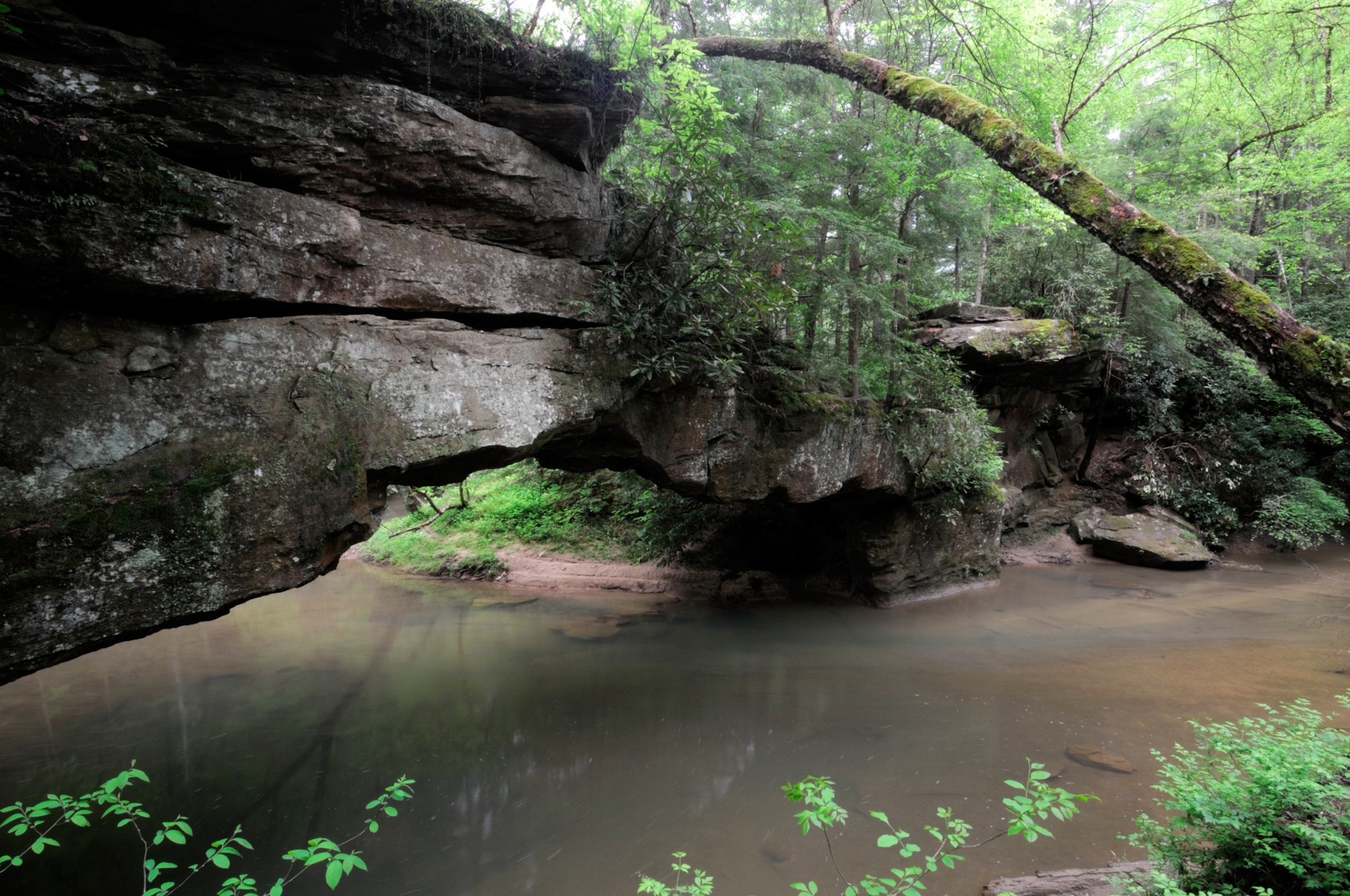 A proposed project on the edge of the protected Red River Gorge highlights community tensions and possible solutions.

But this year, the 42,000-acre preserve known as the Gorge is undergoing another change. Under the shadow of coal’s collapse, state officials decided Eastern Kentucky’s future was in tourism—and they’ve earmarked the Gorge as the official gateway.

“Eastern Kentucky is sitting on a gold mine,” says Christie Abrams, director of Wolfe County Tourism. “Everyone thought it was in coal, and it’s not. It’s literally our [ecological] region.”

A 2020 report, organized by Red River Economic Development group (RRED) and supported by $1 million in state and federal funds, highlighted regional tourism opportunities, including the latest point of contention: a $135 million luxury resort one mile outside the Gorge. A mock-up featured a glossy conference center and 170-room lodge buttressed by Appalachian hills, along with sites for wedding venues, restaurants, a spa, and even a micro-distillery.

But the Gorge’s business community has struggled to embrace this fast-tracked tourism initiative. While some see a future in large-scale development that promises bigger economic boons, others emphasize smaller-scale growth that prioritizes cultural and ecological protections. As the community reckons with its future, the proposed resort could shed light on how to approach tourism development throughout Eastern Kentucky and beyond.

This isn’t the first time residents in the Gorge have weighed the risks and rewards of development proposals. After the flood-prone Red River burst its banks in a 1962 disaster, the Army Corps of Engineers proposed a dam that would have turned a portion of the Gorge into a recreational lake. Ensuing protest halted the project, and the Red River gained federal protection as a Wild and Scenic River; it’s still Kentucky’s only one.

Zoom in on the Red River Gorge Geological Area to see the proposed resort site.

Today, the same spirit of informed resistance lives on in Red River Gorge United (RRGU), a citizen group that initially opposed the resort’s construction through an online petition. Kristen Wiley, director of the Kentucky Reptile Zoo and now president of RRGU, also worked with the University of Kentucky to create a survey of over 400 locals and visitors who expressed concern that their outdoor haven would transform beyond recognition.

At RRED’s first community meeting, Wiley—a biologist—was struck by parallels to international conservation stories, in which outside scientists enter communities and instruct them on how to protect their own ecosystems. But instead of outside scientists, RRED board members were bank owners and land developers selected by—or a part of—Kentucky’s Chamber of Commerce; RRGU viewed it as a “top-down” approach.

“[RRED] told us, ‘We’re here to tell you how to live your life better because clearly you’re not capable of doing it yourself,’” Wiley recalls.

RRGU’s survey rankled those in favor of the project. Dave Adkisson, coordinator for the proposed resort, says the survey relies on fabricated information, including the idea that the resort would attract a million new visitors (the master plan only cited increased visitorship of up to 75,000). He also emphasized the footprint: Only 5 percent of the property would turn into a resort, while hundreds of acres would be preserved as public land.

Despite disagreements over the survey, RRED quickly formed a local advisory board to address community feedback. While RRGU would prefer not to see the resort built, the organization is no longer actively opposing the project; instead, they’re trying to ensure they have a say in its development.

With new input, the master plan grew to include ecologically sound guidelines like limiting construction within 200 feet of cliffs, protecting natural arches from rock blasting, and adopting green-building practices such as creating a Dark Sky Park. In March 2021, RRED announced the purchase of 891 acres of private land for the proposed resort. Whether a developer will commit to these protections on private property is unknown.

“None of us want a Gatlinburg,” says Adkisson, referring to the eastern Tennessee gateway town for the country’s most visited national park, the Great Smoky Mountains, which saw more than 12 million people last year.

“The quickest way for [the Gorge] to become Gatlinburg is for it to continue its current unplanned growth,” Adkisson says. “Right now, anybody could put a limestone quarry next to a souvenir shop next to a hog farm.”

Such unplanned growth has been the model so far.

“There’s currently no zoning regulations as far as what you can do or build on your property,” Wiley says. “It’s an area of very independent people who don’t want a lot of government oversight, so we’re trying to come up with ways there can be oversight without trying to control what someone does in their backyard.”

(Demand for ginseng is creating a “wild west” in Appalachia.)

For some, this lack of regulation has worked well. When Miguel and Sharon Ventura moved their family to the Gorge in 1983, it was to establish a hippie commune on 50 acres. Back then, land and old buildings were cheap. They painted an abandoned storefront yellow, and after a brief stint as an ice cream shop, it became a restaurant called Miguel’s Pizza.

“They were looking for anyone to spend a penny,” says Dario Ventura, their son, now 37. They began feeding a growing rock-climbing community, allowing adventure seekers to pitch tents in the backyard for $1 a night. The restaurant quickly became a climbing magnet.

As climbers crowded the cliff sides, a surge of small businesses like the Venturas’ made the area more accessible and attractive for families who wanted to walk along shorter trails, swim along the banks of the Red River, kayak in retrofitted mining quarries, or ride the one-mile Skylift to vistas at the top of Natural Bridge State Park.

For Ian Teal, who sold the 891-acre site to RRED and is now a member of the property’s holding group, large-scale development could provide a similar economic boom in a fraction of the time. Although he could have put in a limestone mine or logged the land, Teal says, “in my heart I felt like the greatest good for the community was a major project that creates a large number of jobs.” (The master plan promises 300 new jobs and $18 million in annual labor income.)

Powell County’s unemployment rate is low, around 5 percent, but the poverty rate hovers above 20 percent; in neighboring Wolfe County, that poverty rate spikes to 30 percent. In Eastern Kentucky, infamous for its collapsing coal and logging industries, the jobs argument should get traction—but many local business owners say hiring is a challenge. Wiley says it’s not service jobs that are lacking, but salaried managerial positions that could more easily support a family and a mortgage, especially as property prices skyrocket.

Chance of a lifetime

The Gorge’s tourism potential gained statewide attention at an unlikely time: During the Great Recession of 2007-09 and the COVID-19 pandemic, visitors flocked to the geological area.

“People always revert back to the outdoors,” says Ventura. “When they don’t have money, it’s a cheap thing to do.”

But over the last year, the influx of tourists has also overwhelmed the state forest’s infrastructure. Trails are overrun, narrow country roads see bumper-to-bumper traffic, and locals say services like trash collection struggle to keep up. In late 2020, officials announced they would start seeking new environmental protections for the Gorge.

(Kentucky’s only national park has the world’s longest cave system—and a surprising history.)

Today, organizers like Wiley hope to use the momentum around the resort to focus on how to prepare community oversight for large-scale development in the future. Dario Ventura joined an exploratory committee in Powell County to reimagine the county’s commercial future, rather than react to the state’s vision.

“The amount of people visiting the Gorge has been climbing for the past 40 years,” says Django Kroner, owner of a treehouse rental company called Canopy Crew. “I’m a proponent of people getting into nature and learning to love it, and small businesses have popped up, mine included, which bring jobs and money to the area. I hope all that can be done gracefully, as long as it’s done at a manageable pace.”