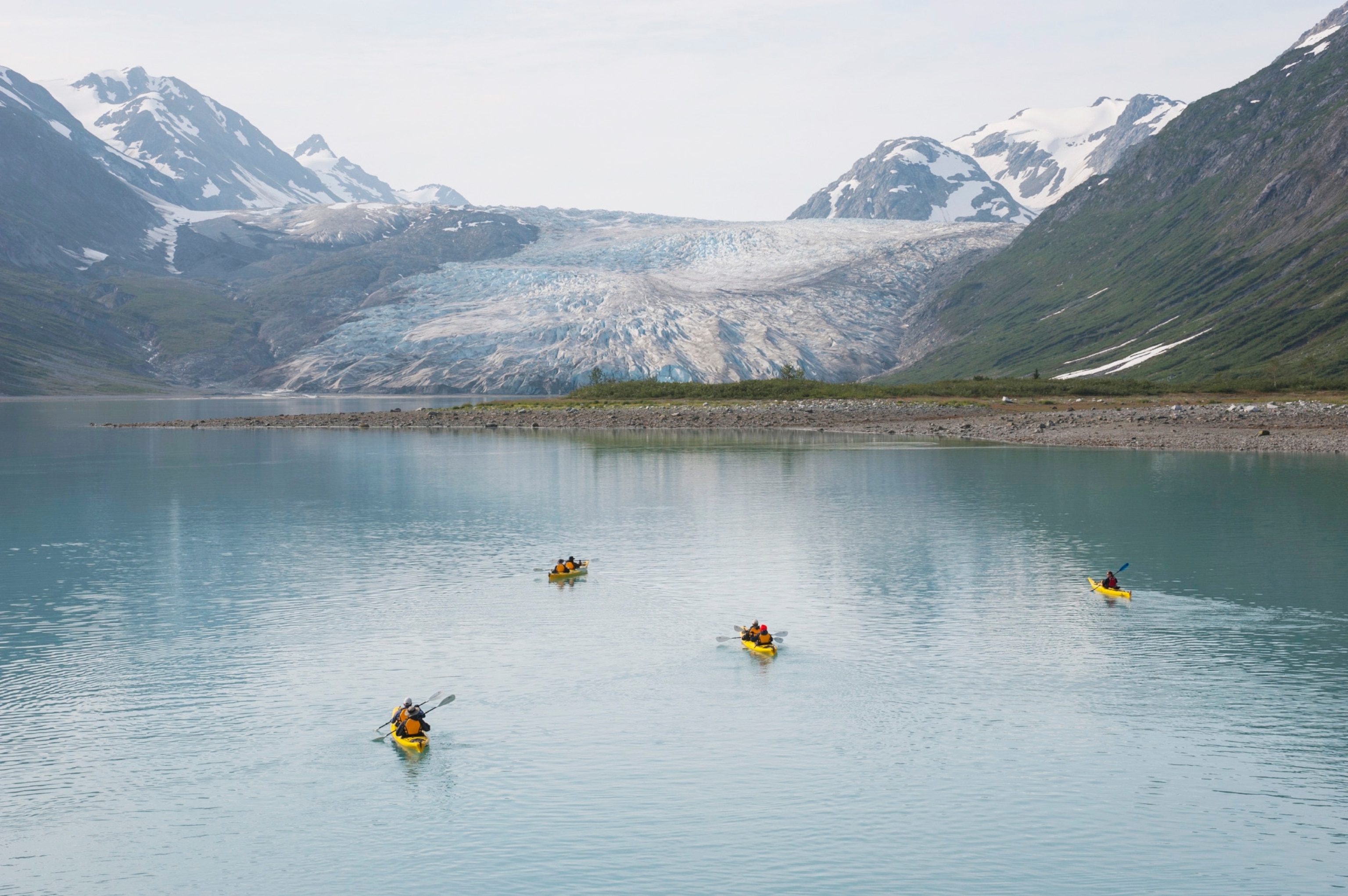 Located in the roadless panhandle of Southeast Alaska, Glacier Bay National Park and Preserve is known for its 1,045 glaciers, covering 27 percent of the park. This includes seven active tidewater glaciers calving into ocean waters—a dramatic event popular with cruise ship passengers who comprise more than 95 percent of the park’s visitors.

But while Glacier Bay’s ample waters have helped prevent the extinction of formerly endangered steller sea lions and humpback whales within the bay, the park’s famed ice sheets have not been spared from the effects of climate change.

Today, the tidewater glaciers have retreated more than 65 miles from Icy Strait. All but a few of the park’s myriad glaciers are receding, and in many cases, rapidly thinning. Between 1949 and 2016, anthropogenic greenhouse gas emissions have increased average summer temperatures in nearby Juneau by 2.2°F; winter temperatures have increased by 7°F. A temperature spike in Alaska that began in the mid-1970s corresponds to a tripling of glacial thinning throughout the state in that period.

Still, adventurers have much to celebrate in this less-visited national park. Formerly endangered humpback whale populations have steadily increased since whale hunting was outlawed in 1966 in the North Pacific. And long-overdue recognition of the area’s Indigenous history and culture adds a meaningful connection to the past.

Land of earthquakes and megatsunamis

Over the last half of the 20th century, Alaska glaciers have accounted for the largest single measured glaciological contribution to sea level, with an annual volume increase of 12.3 cubic miles of water, which equates to a sea level rise of 0.006 inch a year. Alaska’s addition of even less than an inch to sea level rise over the next century, combined with runoff from a much larger volume of ice rapidly melting in Antarctica and Greenland, could be cataclysmic. Then, among other changes, ocean acidification increases as more meltwater escalates carbon dioxide levels.

Billions of tons of melted glacial ice in the park allowed the land to rise, through what scientists call an isostatic rebound. Although this phenomenon promotes landslides and instability, movements between the Pacific and North American tectonic plates are the principal cause of earthquakes, breaking the lightened landscape above like crust on rising bread.

Zoom in and out to see other points mentioned in this article.

Ground zero is the 124-mile-long Fairweather Fault—directly above the colliding tectonic plates—running parallel to the coast and cleaving the western edge of the park. Consequently, over the past 150 years, there have been four major tremors and one severe earthquake that registered 8.8 on the Richter scale north of Glacier Bay, and one that shook the entire southeast Alaskan coast in 1899. Glacier Bay’s tidewater Muir Glacier was so badly shattered that steamships couldn’t penetrate the maze of icebergs for a decade.

(Here’s what we can learn from the biggest U.S. earthquake in more than 50 years.)

On July 9, 1958, a 7.9 Richter scale quake lifted the earth along the Fairweather Fault 21 feet horizontally and 3.5 feet vertically. Nine hundred miles south in Seattle, 20 musicians in a floating orchestra pit mounted on an inland stage bounced up and down for five minutes. One hundred miles away, in a bay outside Yakutat, Alaska, three berry pickers were lost when Khantaak Island dropped 100 feet into the sea.

Thirteen miles from the epicenter, the earthquake shook loose a landslide alongside Lituya Glacier. As 90 million tons of rock splashed into Lituya Bay, the 1,200-foot front of the glacier also collapsed and exploded down into the water, causing the world’s largest recorded wave. Its unprecedented size—expanded through the sloshing, bathtub effect inside the steep-walled bay—made it a heretofore unknown “megatsunami.”

Long before whales sang in these waters, when ice prevailed, four clans—extended family and social groups—inhabited Glacier Bay. According to the Chookaenedí clan, when the Grand Pacific Glacier advanced down the main valley in the early 1700s, it came with the speed of a running dog and destroyed everything in its path. These clans dispersed to different settlements, but today most northern Tlingit (pronounced “klinkit”) can trace their origins to the valley before the glacier came. They eventually returned for seasonal harvests, but once President Calvin Coolidge designated Glacier Bay a national monument in 1925, tribal activities changed.

Many national parks with large protected sections of wilderness have re-created scenic and wildlife-rich landscapes bereft of people. In most of today’s uninhabited parklands, the vision derived from the 1964 Wilderness Act often overlooks those cultures that were at home hunting and gathering in these places long before the parks were established. To a large extent, these indigenous and original inhabitants of the parks even viewed themselves as part of nature. Such was the case with the Tlingit.

(These revealing pictures shine a new light on Native Alaskans.)

In their minds, subsistence—which fulfilled a moral and religious duty—transcended mere economic activity. They only killed for food, without wasting the flesh or mocking the animal. Fish were treated respectfully by returning their offal to streams or burning it for proper reincarnation. Even berries held an inner spirit (yeik) that had to be treated with respect.

By the late 1930s, despite their transition to cash-oriented commercial fishing, trapping, seal hunting, and prospecting, the people remained deeply connected to Glacier Bay through their smokehouses below salmon streams and frequent harvests of berries and gull eggs. When these activities were prohibited in the 1960s, relations became strained between the Huna Tlingits and the Park Service.

But times are changing. In 2014, President Barack Obama signed a law to allow Tlingit to continue sustainable harvests of gull eggs in the park. These harvests had always traditionally heralded the arrival of good traveling weather and relief from hunger. The Tlingit name for the islands studding Glacier Bay is K’wát’ Aaní (“Land of the Seagull Eggs”), and the gulls there are thought to produce richer and more abundant eggs than anywhere in Southeast Alaska. To the Huna Tlingit, K’wát’ Aaní is considered an essential part of the sacred landscape.

On August 25, 2016—the 100-year anniversary of the National Park Service—tribal members dedicated a 2,500-square-foot Huna Tribal House, built by the Park Service and featuring the craftmanship of Tlingit on the south shore of Bartlett Cove inside Glacier Bay. Flanked by two Tlingit-carved, 20-foot-high totem poles, the house draws visitors from around the world to learn about Huna Tlingit culture and history, 250 years after the Grand Pacific Glacier forced them from their ancestral homeland.

The return of humpback whales

As spectacular as collapsing glaciers, watching the acrobatic, humpback whales of Glacier Bay leap out of the sea is unforgettable. These school bus-size cetaceans weigh over 30 tons, but still manage to vertically “spy hop” their bodies straight up above surface for up to a half minute as if to spy on the tour boats watching them, until sliding deftly back into the water. While breaching sideways out of the sea, they often belly flop back in with a thunderous splash.

Humpbacks “bubble-net feed” to capture fish. Diving deep into the bay beneath schools of small fish, they swim in a shrinking circle and herd their prey by releasing bubbles, as if turning on Jacuzzi jets and trapping the fish inside them. Then the whales collectively rise to the surface with mouths agape, sieving the fish yet releasing the water through baleen plates (humpbacks lack teeth). In one gulp, a whale will swallow hundreds of fingerlings and then continue gorging on up to a half ton of prey per day.

The Park Service has monitored whale populations in Glacier Bay since 1985. Biologists have learned how to identify each whale among the dozens that enter the park each spring, after spending the winter in Hawaiian or Mexican waters to mate or give birth. Some individuals have been returning for more than 40 years.

After a pandemic-caused delay, Alaska’s cruise season—which typically runs from May to September—officially set sail again in July 2021, though ships from Seattle are no longer stopping in Canada (the country is currently closed to cruises). Many cruise lines are now following new Centers for Disease Control and Prevention requirements shortening the window for a negative COVID test from three days to two, regardless of vaccination status. All passengers must wear masks while aboard and ashore, in the face of rising Delta variant cases in Alaska. And some cruise lines are requiring proof of vaccination, meaning children under 12 years who are currently unable to get a vaccine will not be allowed to board.

A version of this article originally appeared in the National Geographic Atlas of the National Parks, which takes readers on an epic journey through the extraordinary and unique features that distinguish these wilderness areas.