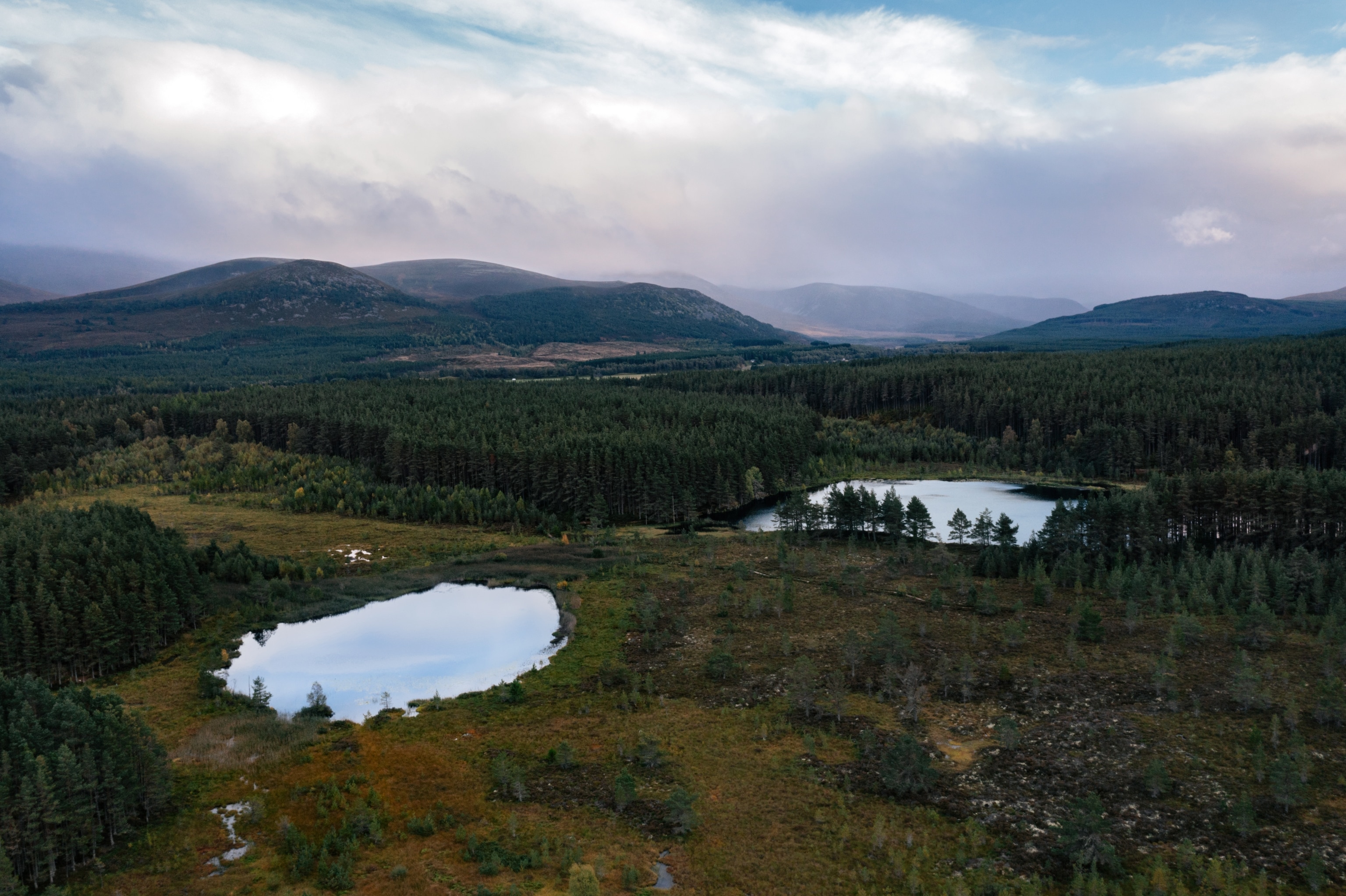 This magnificent region has many ties to the land. From rewilding projects to conservation of endangered species, witness a committed people in spectacular scenery.

Photograph by Michael George
This is Paid Content for VisitScotland. The editorial staff of National Geographic was not involved in the preparation or production of this content.

I pulled into an unmarked car park, stepping onto the soft peat, and searching the bright autumn foliage for a white sign that said “Wooden Tom.” I found the first one attached to a fencepost, pointing me towards an opening in the forest. As I walked among the ferns and branching lichen, I noticed a tree stump carved into a face, one of its branches pointing me onwards. I would soon learn that this slight mystery, the sense of being in a fairy tale, was Tom’s intention all along. He was waiting for me in a tiny shack, lying on the ground and blowing heartily into a wood stove to stoke the fire.

Tom is a “green woodworker,” using hand tools on trees that are freshly felled. He is quick to note that it only takes two large birch trees (his favorite species) to pay all of his expenses for the year. He rents the plot from an estate, located in the Badenoch and Strathspey region of Scotland, settled within the borders of the Cairngorms National Park. The Cairngorms are home to 18,000 residents who have the benefit of living on parkland. Tom does not take this responsibility lightly, teaching classes that encourage people of all ages to not only respect this land but to employ their hands to craft artwork from trees, a limited local resource.

In the Cairngorms, trees are looked at with a particular reverie. It wasn’t long ago that they were almost erased. I’d recently met with Polly Freeman, a ranger in the Cairngorms who has worked within the borders of the park since 1993. She explained, “In Victorian times, we let the deer populations get out of hand. The UK is still paying the price now.” However, Badenoch is one of the few places where you can see rewilding in action. Glenfeshie, a 66-square-mile estate, is fully dedicated to bringing their land back to what it once was. Trees pour up the mountainside, as opposed to marching in a straight line. There are endless local hikes near the estate, from the Wildcat Trail to the Badenoch Way, some of which you can walk for days without hitting a road. “In Scotland, that is rarely heard of.” As the forest, mountains, and rivers reclaim a natural feel, the land here has an aura about it.

Though Scotland has lost all of its large carnivores, a panoply of wildlife is beginning to flourish as their woodlands return. Chief among the focus in Badenoch is the Scottish wildcat, one of Britain's most endangered species. They are slightly larger than your average house cat, with a bushy tail and a much thicker coat when compared to domestic cats, keeping them warm in the deep Scottish winters. In the town of Newtonmore, you’ll find the Wildcat Centre, a nonprofit dedicated to raising awareness of the local conservation efforts. It was here I learned that Highland Wildlife Park is home to a partnership project called Saving Wildcats, which is led by RZSS and plans to release 20 wildcats per year into the wild, starting in 2023. This struggling remnant of what this area once was gives hope to the communities of Badenoch.

You don’t have to drive far to see the evidence and ruins of those that came before. The Ruthven Barracks rest heavy on the horizon, a remnant of the reaction to the failed Jacobite uprising, built between 1719 and 1721. A short drive east of Newtonmore you’ll find Glen Banchor, an area of untold beauty, dotted with empty stone structures. While peeking into the windows of an abandoned house, I met a man who was hiking alone. “The plan is to go for six hours, but now you’ve lost me four minutes,” he said with a laugh as he set off over the hills. It wasn’t long before the flash of his red backpack faded into the horizon. Polly was right, there’s a beauty to the image of someone disappearing into the landscape, knowing this type of wild is a rarity in this country.

Please be respectful of copyright. Unauthorized use is prohibited.
0:11
A hiker sets off on a six-hour trek through the one-of-a-kind landscapes of Glen Banchor just outside of Newtonmore.
Video by Michael George

The people here adore this area, from the landscape to its history. One afternoon I met with the organizers of the Storylands Sessions, Merryn Glover and Hamish Napier, a local writer and a musician. These sessions promote the music and stories of the region, unearthing the many narratives that weave through the local community. As Merryn explains, it is drawing from the ancient tradition of “cèilidh,” a Gaelic word for a gathering in people’s homes where bards, musicians, and storytellers once met to share poetry and songs. At one of their recent events, Duncan Freshwater told the story of his father’s legal battle for the right to navigate the River Spey. The case went all the way to the House of Lords in London, where he won when a 1782 case was cited that had established a Public Right of Navigation on the Spey, a victory that goes hand-in-hand with Scotland’s “right to responsible access.” This ruling helped create the country’s cherished reputation for allowing adventurers to wild camp almost anywhere, as long as they travel responsibly, by treading lightly and leaving the land as they found it. Freshwater, a last name so fitting it feels like a wink, is one of the directors of the Loch Insh Outdoor Centre along with his two brothers. The Centre is a place where visitors can take advantage of the rights his father protected by sailing, kayaking, or any number of other activities on the water.

Badenoch, as Merryn told me, means the “Drowned Lands.” Water, like the forests, has played an important part in its history. All of the towns in Badenoch, from Dalwhinnie to Kincraig, rest along a tributary. A local expert, Dave Craig, who runs “Spirit of the Spey” has been taking groups for multi-day canoe trips and sharing his boundless knowledge along the way for decades. He carries a James Bond-style metal case that holds a collection of whisky drams and a bottle of local scotch. “The true spirit of the Spey,” he jokes, as he pours a small taste after a few hours on the water. Dave knows what’s around every river bend, and times the distance from rapids with scientific precision. In our short time on the water, I learned everything from the history of the bridges we passed under to the location of a rare osprey’s nest.

0:12
A bend in the River Spey near Kincraig, Scotland, as seen from above. The grasses hint at the intensity of the river’s current.
Video by Michael George

On my last day exploring the lands of Badenoch, I was told I must visit the “holiest ground in the area,” a shinty pitch. I had seen signs of the sport every day: a tiled mosaic on the town hall, a shinty-themed bar in the Balavil Hotel, a car’s license plate bearing the name. Shinty is played with a curved stick and a small, hard leather ball, and has been played in the Badenoch area since ancient times. There are a lot of myths around the game’s influence on sports we know today, including ice hockey in Canada that’s attributed to Scottish emigrants playing during the cold winter months. These myths are described passionately by locals, who are also eager to point out the historical rivalry between the towns of Kingussie and Newtonmore. I watched a Kingussie team practice on a Tuesday night, their coach pointing to certain athletes and chronicling the many generations of players they descended from.

It is only about a 40-minute drive from one end of Badenoch to the other, but my four days there were still not enough. Badenoch is a small and mighty part of the Cairngorms National Park, rich in history and wrestling its way back into balance with the landscape that surrounds it. Polly the ranger pointed out, “The Cairngorms don’t have Scotland’s highest mountain, but we do have the 2nd, 3rd, 4th, and 5th.” There are weeks’ worth of hiking trails, and the community is so tight-knit that within a few days I was waving to people in cafés as if I was the newest resident. For travelers, there’s no better way to connect to the land, walking into the open arms of its people.

Click here for more information on visiting Badenoch and the Cairngorms National Park. Top tip: The park is easily accessed via train, and for a new style of adventure consider an e-bike safari.