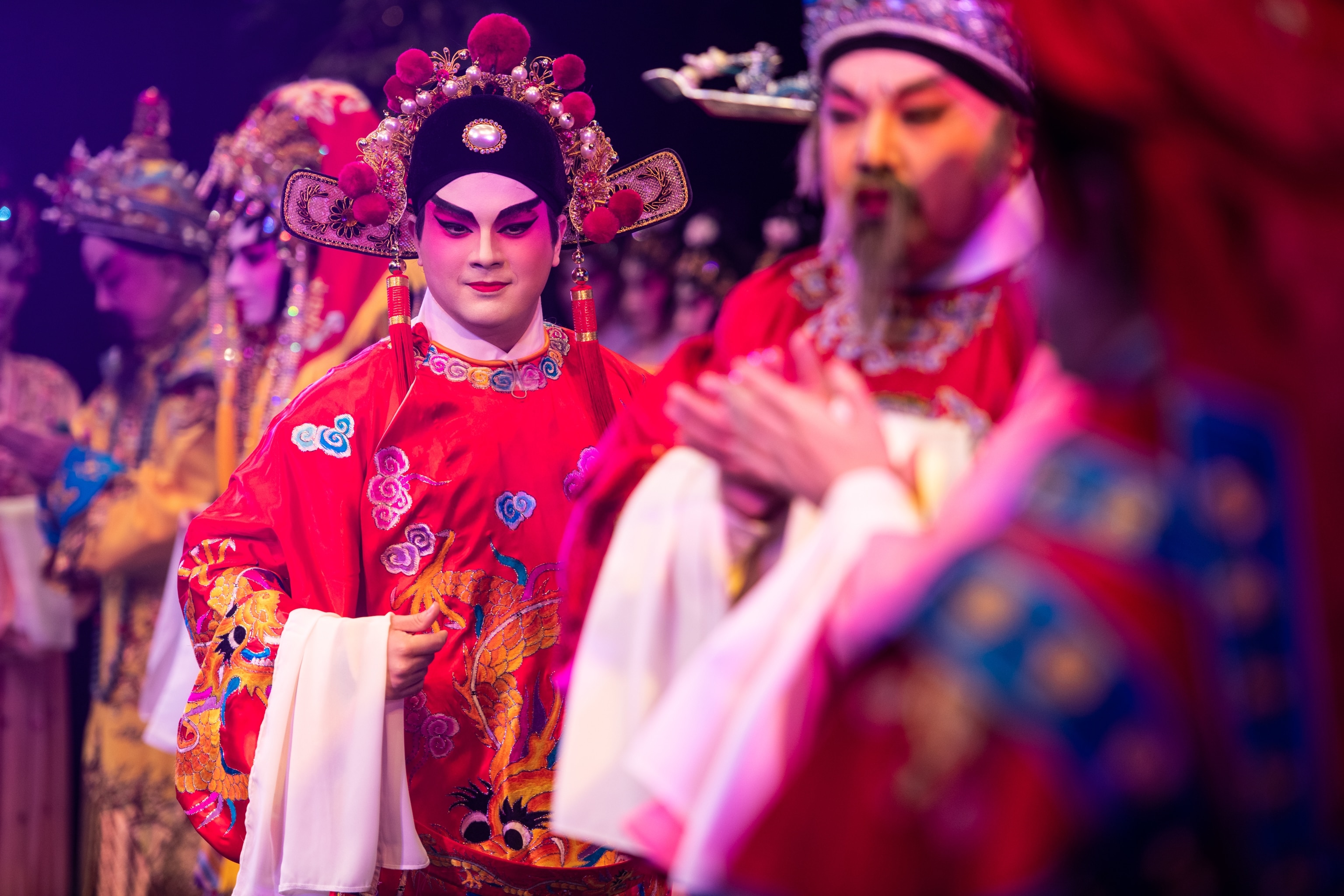 How a New York man, a Hong Kong woman, and their two sons are sharing their passion for Cantonese opera.

Native New Yorker Lawrence Rose (left), who now lives in Hong Kong, on stage in his Cantonese opera debut.
Photograph by Laurel Chor
This is Paid Content. The editorial staff of National Geographic was not involved in the preparation or production of this content.

With a few hours until curtain call, a quiet but tangible energy permeates the backstage dressing room of the legendary Sunbeam Theatre, once revered as “Hong Kong’s Grand Palace for Cantonese Opera”. Tonight, it’s the annual Rose Family performance, and the actors are getting ready.

Some of the performers are eating takeout boxes of char siu fan (barbecue pork rice), arguably Hong Kong’s most popular comfort food, sure to sustain them through the hours-long show ahead. Others are getting a head start on their make-up, a process that requires meticulously painting layers of white, pink, red and black pigment on their faces. A few are being helped into their elaborate and hefty costumes by eager assistants.

Cantonese opera, a southern Chinese tradition that dates back to the 16th century, doesn’t hold back. Its music commands attention and is meant to be loud, dramatic and expressive, with an unmistakable aural signature: the clang of cymbals, the twang of traditional string instruments like the erhu and yangqin, and the high-pitched singing with its elongated vowels carried through a procession of notes. The period costumes, reflective of dynasties past, are just as striking: the fabrics are elaborately embroidered and brightly dyed, and the headdresses, sparkling and tasseled, require careful balancing when worn.

When you speak to Hong Kong’s most fabled Cantonese opera singers, their stories often sound familiar: they started very young, when they were around seven years old. Performing is the only thing they’ve ever known, and their voices are familiar to the southern Chinese who have been listening to them for decades.

But there is something unexpectedly unusual about this particular performance that becomes apparent as soon as the curtains rise: some of the people on stage aren’t Chinese.

Mike Brady, who hails from Pittsburgh, Pennsylvania, stands on stage in full costume, his face painted in the same manner of the other performers. But he has never seen a Cantonese Opera, let alone been in one. As a background character, he has no speaking lines. And without having attended any rehearsals, he’s simply following instructions on where to stand and what emotions to convey.

This unlikely actor owes his debut to his castmate, Lyle Rose, a fellow American who stands next to him in an identical courtesan costume. Lyle, a native New Yorker who now lives in Hong Kong, is not as green of a performer as Mike; in fact, he is the mastermind behind tonight’s show.

Cantonese opera is a family affair for Lyle. Every year, Lyle, his wife, and two sons put on a performance to raise money for local charities. But the real reason they do it is simply to share their passion for the art. Though Cantonese opera remains a pillar of Hong Kong culture, it has to compete against countless other forms of entertainment for the attention of younger generations, who associate it with their grandparents. The Rose family hopes to attract younger audiences to their performances, which are unorthodox not only for their foreign actors but also novel uses of elements like smoke machines, which add a dramatic flair.

This year is special: for the first time, the entire Rose family is on stage, with Lyle’s wife, Cynthia Hui-Rose, and his two sons all playing major parts. Mike himself is actually a brand new addition to the clan: his daughter recently got engaged to Lyle’s younger son, Leonard.

Music runs in the Roses’ blood. Cynthia, a Hong Konger, had been an amateur Cantonese opera singer for years. Lyle and Leonard picked it up simply by hearing her practice around the house. Lyle began to perform alongside his wife, eventually roping in his son Leonard, an actor. This year, they finally convinced their elder son Lawrence, a professional designer and amateur pianist, to make his debut alongside his family.

The show was a rousing success, with a full house of 1,000 spectators, and fans lingering long after to take photos with the cast.

For the two Rose brothers, performing together was a special – and challenging – experience. Until the late Qing dynasty, all performers were male, with female roles played by men. Leonard echoed the past by playing a young woman in this performance, with Lawrence taking on the role as the love interest. The two sang a well-known Cantonese song, which they memorized phonetically since they don’t actually speak the language.

“Right before we went on, we bumped fists,” Leonard recounted. “I usually get nervous before shows but something about performing with Lawrence really calms me.”

Despite the duo’s linguistic barriers, the crowd cheered as soon as the pair came on stage, delighted to see young mixed-race faces performing Cantonese opera despite not even knowing the language.

It’s that kind of excitement that the Rose family hopes to rouse in local audiences. “We love Cantonese opera,” Lyle said. “We really want people to be exposed to it. We want people of all ages to come and watch.”

The soul of Hong Kong: its intangible cultural heritage

How the city's culinary, religious and artistic traditions are vital to its DNA.

The birthday of the goddess Tin Hau is one of Hong Kong’s biggest celebrations.