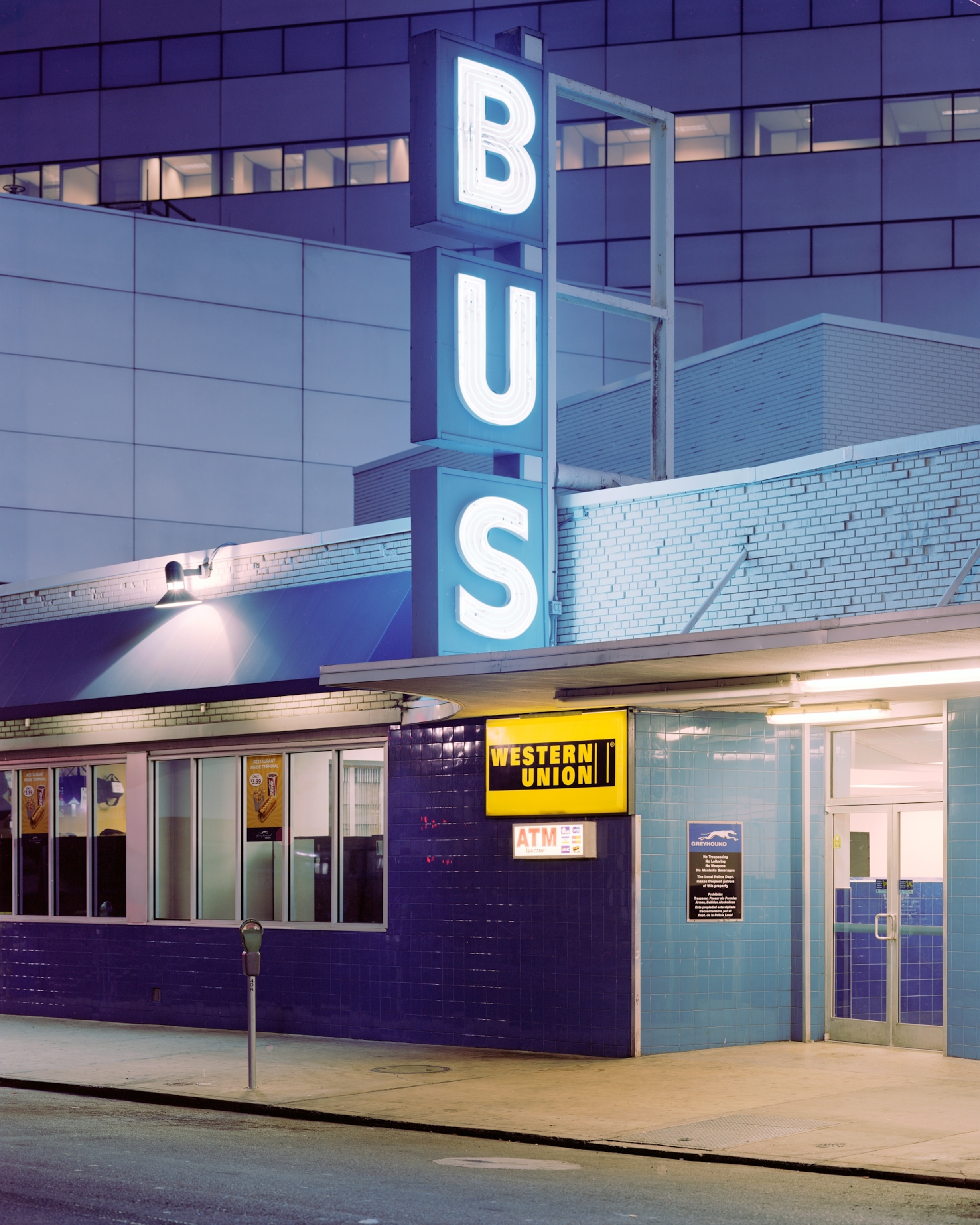 The pandemic has dealt a harsh blow to an already struggling industry. But intercity buses provide a vital service—and a link to a complex national history.

Greyhound got its start in the early 1900s, then grew rapidly; today it serves more than 2,400 locations across North America.

Past national crises often brought good business to America’s intercity bus industry. Ridership saw an uptick during recent economic recessions, and many who were anxious about flying in the years after 9/11 took to buses instead.

But the COVID-19 pandemic, with its social-distancing imperatives and calls for fresh, circulated air, decimated the industry. Bus ticket purchases in December 2020 had declined to a quarter of 2019 sales. (Prior to COVID-19, the bus industry brought in around $15 billion in revenue, according to the American Bus Association.) In 2020, the industry laid off or furloughed around 80 percent of its workforce.

Compared to Amtrak, airports, and public transit agencies, intercity bus companies have received limited relief from stimulus and recovery plans. (The industry did receive $100 million for rural intercity bus services, which rely heavily on federal grants, and $2 billion last year, though the industry had requested five times as much.)

Eva and Jesús arrived at their destination after traveling from Cuauhtémoc, Mexico.

A woman waits in a bus lot at the beginning of her journey to Los Angeles.

But what’s at stake is more than just business: Intercity buses like Greyhound provide services for about 16 million people annually—many of whom rely on buses for essential travel during emergencies or in areas without alternative transit options. And they offer a mode of transportation that may be uniquely equipped to reforge the connections that pandemic isolation has strained to a breaking point.

A sense of connection

Bus stations have a democratic feel that other hubs, like airports—with the anxiety caused by multiple levels of security and bustling connections, not to mention higher price points—don’t quite replicate.

A degree of social mixing occurs on the bus itself. Multiple stops along many routes mean a revolving door of new passengers shifting around the cabin. Many of these passengers are likely to tell you something about themselves (whether or not you asked).

“When you get on a bus, you end up striking up a conversation,” says photographer Richard Renaldi, whose project, See America by Bus, collects portraits of passengers in Greyhound bus stations across the country, mostly taken between 2004 and 2008.

(America’s postal service is a rural lifeline—and it’s in jeopardy.)

The bus passengers in Renaldi’s photos represent a cross section of people: mostly working-class, but a mix of Democrats and Republicans, truck drivers heading home after one-way trips, young queer folk leaving a rural home, people returning from a prison sentence. On the bus, they’re bonded for a short time, all watching the same landscapes roll past.

For much of the country, bus lines like Greyhound are the only option for traveling to another city if you don’t have a car. “They marry the rural and urban parts of the country,” Renaldi says. “The bus passes through all of them.”

Eric poses for a portrait aboard a bus in Flagstaff.

From civil rights to Hurricane Katrina

Like most transit hubs, buses and bus stations are shared spaces where members of different neighborhoods or social classes mix—which has made them important symbolic battlegrounds in civil rights history.

Black Americans, escaping the Jim Crow South for better opportunities in the north and west, used Greyhound buses during the Great Migration. The Freedom Riders used Greyhound buses to protest segregation and to test new protections on interstate passenger travel. In 1961, a mob beat and firebombed the Riders’ bus in Anniston, Alabama, attempting to trap the passengers, who escaped through the windows and door; the Riders had to be evacuated from Anniston through a convoy.

But intercity bus transit has played its own role in enforcing inequality. Before the Freedom Riders protest, bus operators would move Black passengers to the back of the bus when venturing south of the Mason Dixon line.

The accessibility of bus services and the mutability of their routes have historically made it an effective method for cities to move systemic problems elsewhere. Prior to the 1996 Olympics, for example, Atlanta leaders aimed to make the city more hospitable to the world by reducing its hospitality to people experiencing homelessness. The city bought thousands of one-way bus tickets to other locales to remove homeless populations from sight.

This practice continues in other cities today, though the effectiveness of such programs is in question. In Portland, Oregon, officials found that half of those bused out of the city had lost their promised housing after three months; a 2017 Guardian investigation found that, of the 7,000 homeless people San Francisco claimed to help between 2013 and 2016, nearly half were simply given one-way tickets elsewhere. The social predicament doesn’t disappear—it’s merely relocated.

On the other hand, Greyhound and other intercity buses have a long history of helping move people during human emergencies of all scales—transporting hurricane victims, or children running away from (or returning) home, or students who need a last-minute option to see family. But because of the risk of viral transmission, the COVID-19 pandemic has put a majority of rides at a standstill: Scheduled motorcoach service declined by nearly 90 percent in the months following the pandemic, rising only slightly through 2020.

The pandemic presents a crisis on top of a crisis for the bus industry: Intercity bus travel has steadily declined during the past few decades. Greyhound operates less than a third of the fleet it had in the 1980s, having cut many routes after declaring bankruptcy in 2003 in the face of competition from discount airlines.

Yet it remains the country’s largest intercity bus company, with more than 2,400 locations in the U.S., Canada, and Mexico. Greyhound also operates subsidiary brands, including Bolt Bus—despite being itself a subsidiary of a British company since 2007. (Other competitive lines include Coach USA, which owns Megabus and Olympia Trails, and Trailways, as well as hundreds of small charter, passenger, and private transit companies.)

Despite the fact that intercity buses are hailed by some transportation experts as one of the most climate-friendly ways to travel (particularly for distances less than 1,000 miles), bus transit suffers from deep-seated stigma. “Crazy Greyhound stories” abound, and bus services tend to have a reputation as seedy and run-down—a decidedly unromantic way to travel.

This reputation is a far cry from the one advanced in the mid-1900s, when Greyhound enthusiastically promoted a vision of romantic travel in America, marketing itself as the method by which one could have adventures (like Clark Gable and Claudette Colbert in It Happened One Night) and discover the country’s authentic spirit. (“Now I Know How Columbus Felt!” read one 1950s advertisement.)

That mythologizing now happens in a very different context: In recent years, Greyhound has transported Latin American immigrants and asylum seekers from Southwest border towns to cities across the country. The view from a bus provides the first impressions of the American Dream to immigrants who’ve come looking for work or refuge or hoping to reunite with family. (Conversely, during the Trump presidency, U.S. Border Patrol agents ramped up immigration checks on Greyhound buses, a practice the company said it would stop in February 2020.)

(Here’s why travel is an essential human activity.)

But the real romance of bus travel lies in something much more tangible. Greyhound bus stations are usually located in urban and accessible parts of cities, and their architecture lends itself to community building.

Another of Renaldi’s photo series, Touching Strangers—in which two complete strangers are asked to physically interact, often through embraces or hand holding—grew out of the Greyhound project, since many of the stations have communal benches where close quarters are the norm.

In Renaldi’s Greyhound photos, notations of passengers’ starting and ending points capture both the subjects’ transience—and also a sense of possibility. A Britney Spears lookalike heads from Los Angeles to New York City. A woman in a bright-green bowler hat and fuzzy scarf goes from Atlantic City to York, Pennsylvania. A man wearing an Islamic thobe in Fargo, North Dakota, told the photographer his final destination is Mecca.

Those of us emerging from social distance and isolation might see someone in these photos and wonder what brought them to the bus—and what’s waiting for them at the end of their journey.

Sonam Vashi is an Atlanta-based journalist who writes about criminal justice, immigration, and history. Find her on Twitter.

Richard Renaldi is an American portrait photographer best known for his photos of people in public spaces. To see more of his work, follow him on Instagram.