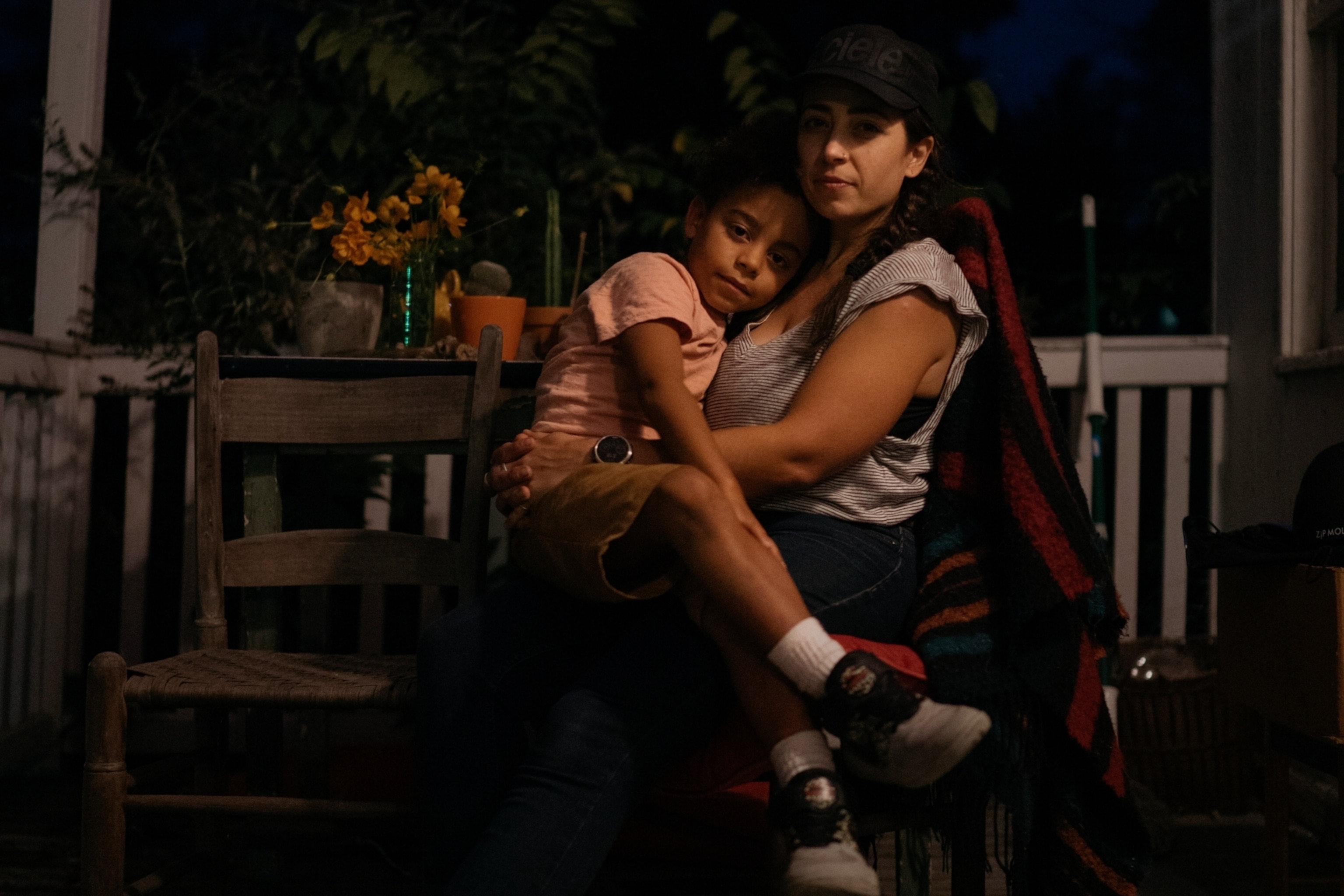 ‘We are everywhere’: How rural queer communities connect through storytelling

Hermelinda Cortés, pictured with son Santos Timmons Cortés at their Virginia home, is part of the editorial advisory team for the Country Queers podcast. She and Rae Garringer, the podcast’s host, met at a 2013 event where she facilitated a conversation among rural queer Southerners. Garringer hopes to interview her for the project someday.

In the summer of 2014, Rae Garringer took a road trip.

Toting a tent, atlas, camera, and recorder, Garringer maneuvered their tiny Subaru on a winding route across the rural United States, from Mississippi to New Mexico to Colorado. They spent some nights in campgrounds, some in hotels. But more often than not, Garringer slept on the couches and floors of near-strangers, eating food from their grills, walking their land, riding their tractors—and recording their stories.

The trip did a number on Garringer’s wheezing car, but each mile served a purpose: As a queer person in Appalachia, they needed to know they weren’t alone.

Garringer ended up with 45 hours of tape that proved they weren’t—the seeds of an oral history project in its fitful early stages. Then summer and the Subaru sputtered to a stop, and Garringer went back to work at a public school in West Virginia, where they didn’t feel they could be out. Still, the trip changed things for Garringer, who returned home to Appalachia in 2012 after eight years away. They were prepared to feel isolated, but the interviews they collected on their trip told a more nuanced story.

“Rural queer lives look so different, across space, across people’s identities,” says Garringer. “I came back like, ‘Oh yeah, we are everywhere.’ Which I’d felt to be true, but I didn’t have personal evidence for it.”

Much of the transcribed audio Garringer collected during their Kickstarter-funded road trip was added to a website: “Country Queers.” Hoping to provide access to the kinds of stories they had needed and couldn’t find, Garringer had begun by interviewing friends, then friends of friends. A fledgling network grew through word of mouth. When the project began in 2013, it was a solo endeavor; today, Garringer works with an assistant editor and three editorial advisers, all encountered along the way.

Now, 65 interviews later, the oral histories are taking the form of a podcast, set to a gently-strummed banjo. Even as the project grows, the goal remains the same: figuring out what the future can look like.

“As much as this project has been about amplifying people’s stories and raising our visibility, there is such a personal piece for me of like, how do we do this?” Garringer says. “How do we thrive in these places?”

(Related: Half a century after Stonewall, hear these stories of resistance and resilience.)

Garringer received a master’s degree in folklore at the University of North Carolina in 2017 after leaving their position in West Virginia, but initially had no experience with oral history. They gravitated to the method naturally—listening carefully to stories was a childhood instinct, honed and harnessed to benefit others. Tommie Anderson, the podcast’s assistant editor, often thinks about what it would have meant as a teenager to hear the terminology offered in interviews, and to discover a selfhood through the stories of strangers.

“The stories containing a lot of the language that we needed…would have changed things,” Anderson says. “Drastically.”

This is oral history, distilled to its essence: One person shares, one listens and records, and the past becomes a living thing to learn from.

Thirkill works as a hospice nurse on the weekends. She recently became an RN and is working to become a nurse practitioner. Garringer interviewed her in 2016, but the two met on OkCupid in 2013, chatting about bees, goats, and ducks.

Thirkill was recently inspired to begin vlogging about her experiences farming after realizing that most of the homesteaders she learns from on YouTube are straight and white. “I’m not doing anything fantastic, but I can provide some education, and if people get something out of it, awesome.”

A history of histories

Oral traditions have existed for generations, but oral history began “robustly emerging” within academia after the 1960s, says Seth Kotch, director of the Southern Oral History Program. Young activists and organizers were entering graduate school, wanting to learn from an older generation. Even today, many oral historians approach the work from a “justice-seeking perspective,” says Kotch, and most focus not only on public movements, but on the details of individual lives.

The discipline isn’t without critics. Some scholars in empirical fields claim “objectivity as the benchmark for academic truth,” says E. Patrick Johnson, who publishes and performs stories of queer Black individuals in the South. Because memories are rarely objective and almost always contradictory, oral history is often thought to be unreliable, fluctuating, even fluid.

“The foundation of queer oral history work is a total frustration—sometimes anger, sometimes grief—at being left out of the archive,” Ruiz says.

Perhaps as a result, oral history is uniquely suited for community use. Myrl Beam, oral historian for the Tretter Transgender Oral History Project, calls the form a “history from below,” accessible to individuals outside of power structures, including academia.

“When someone with a Ph.D. goes out into [a] community and gathers these stories to be held in a university repository, that’s valuable, in some ways,” Beam says. “But a community archive is even more valuable, because it transforms the community it documents.”

The Country Queers project is a reflection of that transformation. By embracing the contradictions of oral history, Garringer hopes to complicate media’s prevailing narrative of rural queer life, which emphasizes isolation, secrecy, and danger.

In reality, no two stories sound the same. The project leaves room for fluidity: Garringer always follows interviewees’ leads, even if they end up speaking about horses, goats, their garden or snow cone stand.

“My hope has been that [the project is] for rural queer people,” Garringer says. “I want it to be first and foremost about us seeing each other.”

(Related: How do you beat loneliness during a pandemic? LGBTQ elders lend their wisdom.)

Country Queers relies on this connection. Sam Gleaves, who was interviewed for the website in 2013, believes he wouldn’t have been at ease sharing his experience with someone who wasn’t queer, or who didn’t grow up in Appalachia. Without this mutual understanding, the more complicated parts of his coming-out story—including his family’s reaction—might have been misrepresented.

The connection Garringer helps to build is even more intimate in podcast form. You can hear people’s “hearts in their voices,” Gleaves says.

Lately, Garringer has been thinking about that intimacy. In 2013, they felt alone. In 2020, much of the world feels the same.

Garringer couldn’t have predicted a pandemic, but they’re glad the podcast’s themes are resonating. The stories are personal, but each episode offers wisdom: how to survive isolation, how to find community there.

“Country queers know how to do this,” Garringer says.

Over the past few months at their home in Kentucky, they’ve been attending virtual film screenings and Zoom gatherings. They can still swim in the nearby lake and walk in the woods. And being home has its advantages: The first episode of the podcast features audio of their dog and ducks. The sound disrupts the quiet. From there, the stories start.

Nicole Blackwood is a freelance writer based in Boston. You can find her on Twitter.
Annie Flanagan is a documentary photographer focusing on issues surrounding gender, sexuality, and trauma in the United States. Follow them on Instagram.