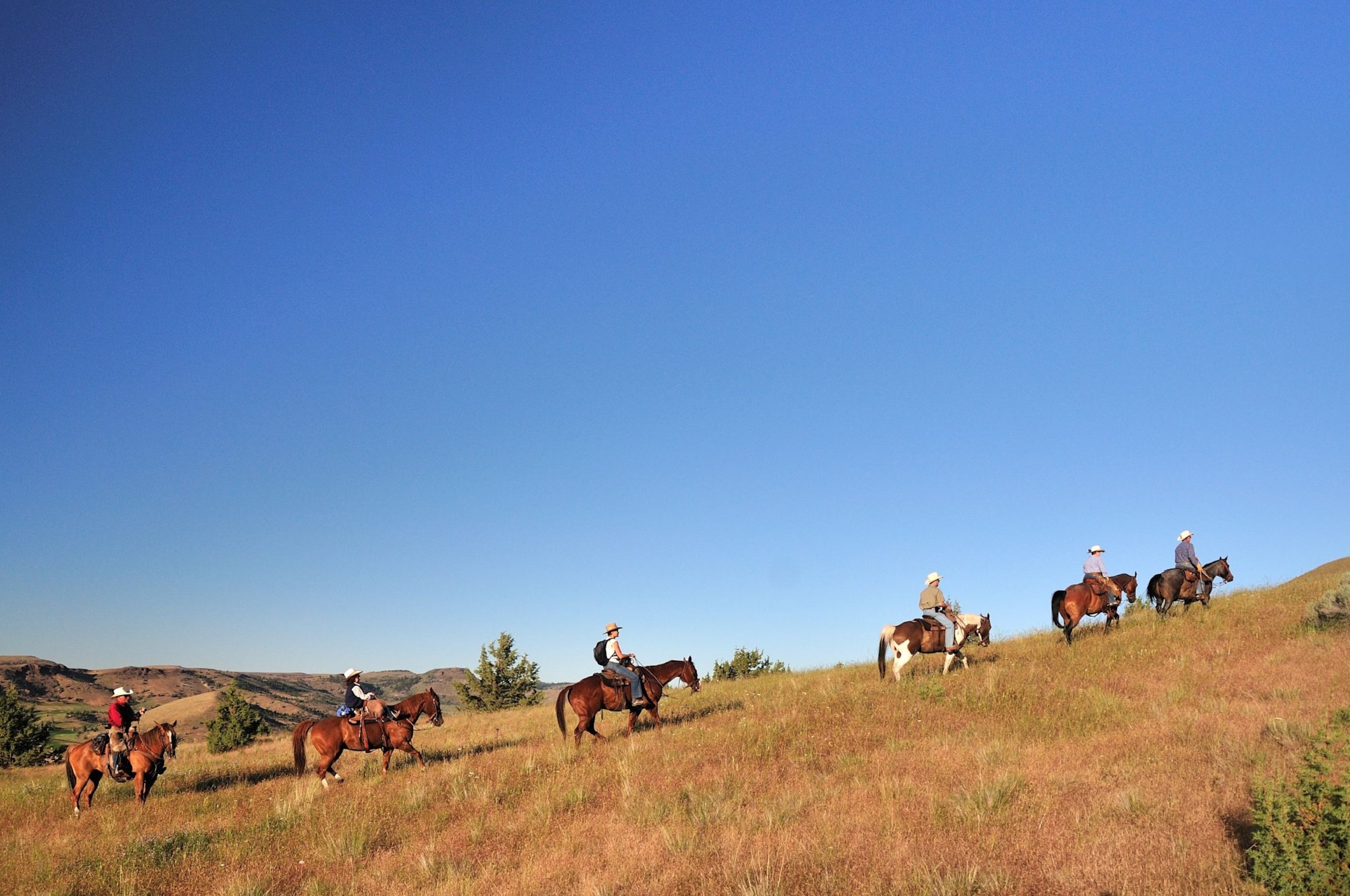 See the best of the West at these family ranches

The scrubby hills of central Oregon are a landscape you’d expect in Wyoming or Texas, not in a state known for Cascade volcanoes clad in waterfalls and evergreens. But it does feel like a more appropriate place for riding horses behind a boots-and- Stetson cowboy like Brian Anglin.

With his wife Kara Wilson, Anglin owns and runs Wilson Ranches Retreat, a 9,000-acre working ranch and bed & breakfast in the tiny city of Fossil. He’s leading us on a morning ride, out and back before the arid summer heat kicks in.

“Know why you never buy a white horse?” he says in a laconic drawl we’ve learned usually hides a dry joke or two. “They get dirty easier. Seriously, though, they can get sunburned, so you have to put sunscreen on ’em.”

Anglin’s family is the sixth generation to run the ranch—Wilson’s ancestors arrived on the Oregon Trail in the mid-1800s—and today they’re just as committed to welcoming visitors as they are to raising cattle and baling hay. Guests stay in one of six retro Western-styled rooms in a 1910 Sears Roebuck ranch house, each with a private entrance and bathroom. It’s the first place my girls watched a movie on a weird contraption called a VCR.

This is the fourth summer I’ve come from Portland with my two kids. We all love riding, but we also look forward to digging for fossils behind the local high school, swimming in the John Day River and ogling the Painted Hills, part of the John Day Fossil Beds National Monument, an hour’s drive away. The girls are also happy to leap across mountains of hay bales and practice their lassoing skills on Gritty, the ever-patient ranch dog.

The COVID-19 pandemic has forced a few changes. The ranch’s “three o’clock breakfasts,” hearty enough to fuel you almost an entire day, are now at outdoor tables instead of in the dining room. But as Anglin’s son Dina said a few minutes ago, as he ducked under a juniper branch, “We’re lucky horseback riding is naturally socially distant.”

Across the West, dude ranches has a range of options for safely spaced family vacations. Most offer all-inclusive packages including lodging, dining and riding, often with add-ons from pools and hot tubs to hiking and yoga. Here are a few of our top picks.

Zoom out to explore all the dude ranches mentioned in this story.

There’s a sense of timelessness to the sweeping grasslands of the Sonoran Desert of southernmost Arizona, backed by the Baboquivari mountains. Half a mile from the Mexican border, the Rancho de la Osa presents a suitably historic setting. Originally the home of ancestors of the Tohono O’Odham people, the property has switched hands from Spain to Mexico to the United States over the centuries. The ranch headquarters is the oldest continually occupied building in Arizona, built as a Jesuit mission outpost in 1720.

(Beat the crowds at this American icon and see amazing nature along the way.)

Guests can venture out on electric bikes, explore a nearby ghost town, and hike to the 7,730-foot peak of the Baboquivari range. Or bring your binoculars to the birdwatching utopia of the Buenos Aires National Wildlife Refuge next door, home to 300 species including the endangered Masked Bobwhite Quail.

Children’s riding can often be summed up as, more or less, “let’em tag along on the calmest horse.” Not so at the Drowsy Water Ranch, where kids on saddles are much more than an afterthought. Set in a private mountain valley under two hours from Denver, Drowsy Water is one of the few dude ranches that offers a full slate of riding options and instruction for even the youngest children.

The Buckaroos program for kids under five puts tykes on small horses in a pen, and works in games, crafts, and picnics. For guests between 6 and 13, the Range Rider program pairs children with their own horses for the week, with arena practice and backcountry rides.

(Go off the grid at horse ranches in Patagonia.)

“We focus on teaching kids how to communicate with and build a relationship with horses,” says owner Gretta Fosha. In operation since the 1920s, the 700-acre ranch has nine creekside cabins, with non-mounted options such as archery, rafting, and a zip line. In the evening, there might be a talent show or line dancing. There are adults-only rides for guests without children (or parents who need a break), and, of course, certified childcare is available.

With a maximum of 12 guests at a time, the Bonanza Creek Country Guest Ranch isn’t a place for meandering nose-to-tail rambles in a big group of first-timers. Guests come here to ride, for real, on former ranch animals including quarter horses, paints, and Appaloosas. Every guest has to be comfortable in the saddle, as they will be matched with a mount for their entire stay, based on ability. The ranch runs 1,500 head of cattle on 25,000 acres, so there are plenty of options to practice herding.

Try the sport of team penning, or simply canter across the ranchlands of central Montana. (There are non-mounted options, including hiking, fishing, cookouts, and massages; check their schedule for women-only Cowgirl Retreats.) Pre-dinner cocktails await after a day in the saddle. All four cabins have wood-burning stoves, gas heat, and private decks; two have kitchens.

The American West has no shortage of panoramic landscapes. But the backdrop at Moose Head Ranch, located entirely within Wyoming’s Grand Teton National Park, is in a class of its own. The serrated peaks of the Teton Range soar over the Snake River and meadows filled with alpine flowers.

Within day-trip distance of Yellowstone National Park and the city of Jackson Hole, the ranch started as a 1925 homestead before expanding into a collection of cozy cabins with porches and wood burning stoves. Depending on the day, horseback rides head along the river, into the Bridger-Teton National Forest, and throughout the Teton National Park. One highlight is the abundance of wildlife including elk, antelope, moose, and bald eagles.

(These horseback journeys in the Wyoming offer a deep connection to nature.)

“We have a resident herd of buffalo to the north we regularly see on rides,” says third-generation owner Lindsay Davenport. “A family saw a grizzly just last week.” After a meal fancy enough to have featured in Bon Appétit magazine, repair to your porch to watch the sun set behind the mountains.

The focus is on detaching from the modern world, Davenport says. There aren’t any TVs, and although some buildings have internet service, “a lot of people like to use Moose Head as an excuse to say there’s no wifi so they can get away from it all.”

Julian Smith is an award-winning journalist and author based in Portland, Oregon.